CORRECTION - THESE BOYS ARE PART OF A DIFFERENT FEEDER PROGRAM ASSOCIATED WITH THE BOYS SCOUTS. HOWEVER I BELIEVE THE INTENTIONS ARE THE SAME. FEMA IS RAISING A PRIVATE ARMY.
THANKS TO JOE ORTIZ FOR POINTING OUT THE ERROR.

Take a good look at this picture. Is the US government is training Latino youth as a kind of Hitler Youth or Communist Red Guard to put down American resistance to NWO/Communist tyranny?

On September 13, 2012, the Dept of Homeland Security graduated its first class of FEMA Corps youth, aka the Homeland Youth.

The federal government calls them FEMA Corps. But they conjure up memories of the Hitler Youth of 1930's Germany . Regardless of their name, Obama's Dept of Homeland Security has just graduated its first class of 231 Homeland Youth! Kids, aged 18-24 and recruited from the President's AmeriCorp volunteers, they represent the first wave of DHS's "Youth Corps", designed specifically to create a full time, paid, standing army of FEMA Youth across the country!

On September 13, 2012, the Department of Homeland Security graduated its first class of FEMA Corps first-responders, "Homeland Youth". While the idea of having a volunteer force of tens of thousands of volunteers scattered across the country to aid in times of natural disasters sounds great, the details and timing of this new government army is somewhat curious, if not disturbing!

The first problem one finds with this 'new army' is the fact that they are mere children. Yes, 18 is generally the legal age a person can sign a contract, join the military or be tried as an adult. But ask any parent - an 18, 20 or even a 24 year-old is still a naÃ¯ve, readily-influenced kid.

The second problem with this announcement and program is its timing. Over the past two years, Obama has signed a number of Executive Orders suspending all civil and Constitutional rights and turning over management of an America under Martial Law to FEMA!

Also in that time, domestic federal agencies under DHS, including FEMA, have ordered billions of rounds of ammunition as well as the corresponding firearms. Admittedly, these new weapons and ammunition are not to be used in some far-off war or to fight forest fires in California , but right here on the streets of America ! 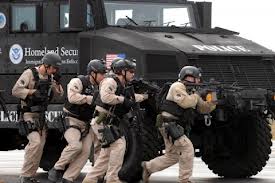 Individuals around the US have begun reporting the site of strange, new, heavily-armed FEMA fighting vehicles.What would a disaster relief agency like FEMA need with 2,500 brand new GLS armored fighting vehicles? According to the agency's own mandate, as well as Obama's recent Executive Order, the answer is 'population control' during a time of Martial Law.

DHS Loading up on Ammunition - 5 bullets for every America  - In case they miss you the first time.

Welcome to the FEMA Corps Inaugural Class   Of course, they mask it as "disaster relief" - So why the guns? This puts gun control and illegal immigration into perspective.


Thanks John for sending this information

Comments for "DHS/FEMA Raising an Army "

I read in an article dated 2005 that Mexican and Ecuadorian nationalists were being trained to fight resistance in America in the event of martial law. I believe this statement to be true: â€œAmerica now uses FBI Division 5, CIA Division 4, and elements from within the Department of Defense (DOD) and Defense Intelligence Agency (DIA) for its dirty work. Five-man Delta teams made up of nationals from Mexico and Ecuador are being trained for house-to-house extraction and murder of American citizens--when the day comes that Martial Law is declared and what little is left of our Constitution is scrapped.â€

The comment by Joe Ortiz (below) is the same old double-speak heard from the counterfeit-Jews in Israel shouting anti-Semite whenever someone
speaks some truth. It does not matter what one's nationality is, except to a person who uses their "racism card". The situation IS dire, AND everyone is in danger.

The 'racism card' is the N.W.O. tactic, more to come no doubt, to keep the truth looking racist. The truth is the truth and helpful research is being ignored and denied because of the age-old cry "it is racism", when it is reliable, factual data for people to better understand the times.

Hey Joe [below] , if you are OFFENDED at the sight of Latino youth being used as tools , DO SOMETHING ABOUT IT . Educate them . 'Cause I tell you right now , if a pack of these wolves come to my house , I'd rather be judged by 12 than carried out by 6 . They are going down , and down hard .

I have been a fan of yours for quite some time, and agree with many of your articles on your web site. However, when I read the article (click the link above) intimating that Latino you are being trained by FEMA to kill American citizens, I just about fell off my chair.

I don't know who this Bruce Lazarus is (nor John who sent you this article), but your posting this without checking into the veracity of this piece is reprehensible. This piece is probably the most irresponsible article I have ever read in my entire life. You (and Lazarus) do not provide any data or source as to where this information comes from, you just blatantly mention Latino youth in your opening paragraph and direct your readers to view the photo. Who knows where this photo came from? Did you bother to ask John where he got the photo? Obviously not.

Solely by inference alone, this piece has added fuel to an already emotionally charged (white) audience concerning the Latino community, who view any Hispanics as a threat to this country, whether they are American born citizens, immigrants, legal or not.

I'm writing to you now to get specific information concerning this matter. Hopefully you will check further into this concern and get back to me as soon as possible.

Let me say this, I agree wholeheartedly with the majority of your information, especially as it concerns who the real enemy is who want to rule the world. Sadly, many web sites and authors who write articles about this plague, project subtle (white) Nationalistic tendencies, and many include Hispanics as being part of that force. Many intimate (and many actually state) that the immigration problem was created by these elitest, and that Latinos are an arm of this diabolical entity. More importantly, this article is the matchstick that will incite a civil war between the predominate community and the largest ethnic group in America.

Please click on my web site Joe Ortiz Associates to view my credentials. As a veteran journalist and publicist for over 40 years, I have a large following of national Hispanic and other American leaders who view my web sites and blogs (about 100,000 hits per month), who would be extremely interested with your response.

I appreciate your sensitivities but look at the official DHS picture! I just about fell out of MY chair. All Latino.

Look at the other picture. Mostly minorities. Same uniforms.

The rest is inferred from the pictures and from the Big Picture as we know it.

That is what my site is all about. We do not rely on FEMA/DHS to announce their intentions.
They may not even know the ultimate agenda themselves. We need to believe our eyes, not what they tell us. Did you read the links below the article?

Well, the Marxist/Bolshevik Congress is now in place but it won't be complete without a Cheka Police Force to enforce NWO enslavement of the masses.