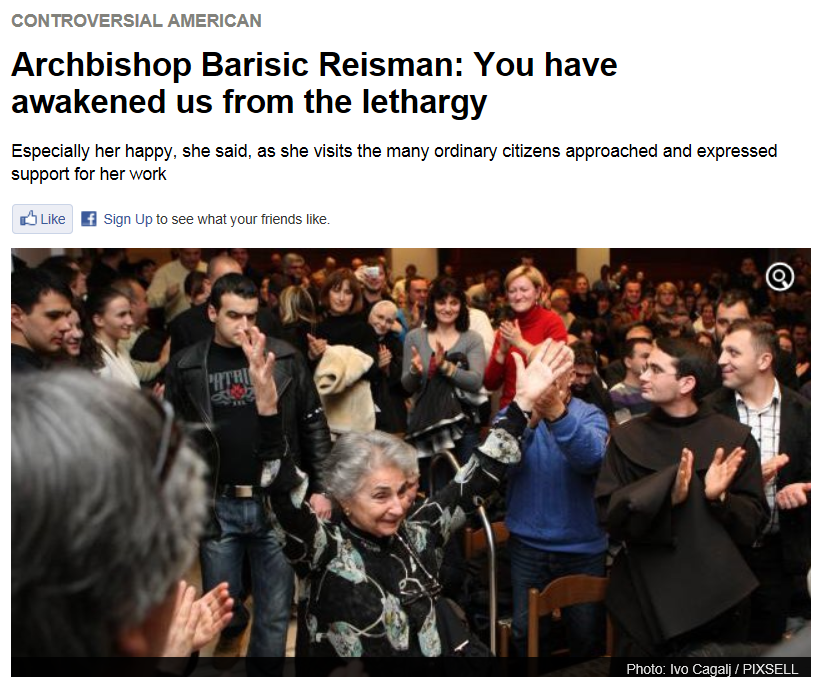 Reisman visited Croatia was to give support to HTV journalist Carolina Kristo Vidovic , whose show canceled due to views on sexual education based on "Kinsey's Paedophiles, Secret History."


"If you introduce sex education in this school I promise you, you'll have a rise in sexually transmitted diseases, the rate of teenage pregnancies, abortions and promiscuous behavior because children mimic what they see. You will pay a high price for it." Judith Reisman told a meeting.


This is a google translation from a Croatian newspaper account, so the wording is a bit rough.


ZAGREB - Dr. Judith Reisman spoke at a round table in Parliament called by the HDZ who was one of the fiercest critics of the proposed introduction of sex education in schools.

HDZ members apologized for the rude reception she experienced the past few days in Croatia, especially at the Faculty of Political Science. 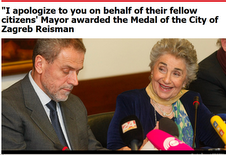 "I wish to express regret for these attacks, especially because of false accusations of anti-Semitism. You were exposed to a frightening campaign, verbal attacks and primitivism. But there's a different, tolerant and prosperous Croatia, which may not be with you but will listen. While you spoke in Congress, some fake liberals wanted to forbid to speak in the Croatian Parliament. But freedom of speech won- said Stier who apparently initiated the idea that the HDZ is one of the hosts of the controversial Reisman.

Reiner apologized for intolerant Croatians who want to impose their views to others, with their defamatory attacks and hate speech."Anthony Kulušić called Reisman's Lecture in Parliament as "a source of pride."

Jandrokovic however said that such harsh reactions to the debate on Sexuality Education come from leftist radicals and so-called democrats. "We showed that we will not allow a secret plan that they want to amend the Croatian society."

In her speech, Reisman called Kinsey the "pedophile who has changed the world," based on his research on children.

- It also stems from the Kinsey that we are all sexual, says Resiman.  On almost any question HDZ MPs such as what kind of public debate in the United States conducted before the introduction of sex education, what is our fourth module relative to that in other European countries, and if he knows anything about the American groups that advocate refraining from sex until marriage, did not give specific answers. But that is why the issue of Ante Babic responded:

- There are ideological reasons. He wants to destroy the family to take a control over the children, and Society. The target of the family and the Church. Reisman again reiterated that she came to Croatia to support journalist Carolina Vidovic Kristo.

"I sent an open letter to the Minister of Education and Leadership HRT and requested the meeting to discuss with the political powers that be about what happened to one of the key reporter who was punished because she was researching the work of Kinsey," she explained.

And her assistant, a British journalist Timothy Tate , even accused the Prime Minister Milanovic being involved in the suspension Vidovic Kristo. - In the UK Prime Minister would never interfere as yours has.