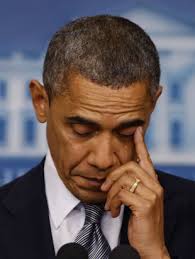 "The powers in total control of this event were "Washington, D.C." and the "Justice Department." Noted [veteran news reporter for Hartford Courant,] David Owens, 'local police of Newtown and State Police' are not responsible for any discrepancies or errors in the reporting. That all came from federal sources (direct communication). That means that the entire event was orchestrated by the Obama White House."

(Editor's Note: I am not in a position to verify these claims. However this scenario seems plausible.)

Sandy Hook - What is Known for Sure

The following is a summary of what is definitively known regarding Sandy Hook. In other words, this is information that is incontestable.   All that is said, here, is easy to prove. Let anyone prove it wrong.  Regardless, these facts will prove that Sandy Hook was a fraud perpetrated by elements hostile to the American people.

One purpose of this fraud or scam is to orchestrate new laws for gun control and confiscation. Other reasons are to create increased control and oppression over the American people. The irrefutable facts about Sandy Hook or what might more appropriately be called the Sandy Hook Hoax are as follows: 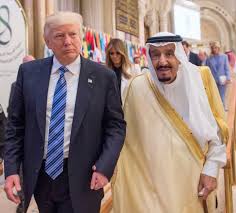 The common pictures of Adam Lanza, where the whites of his eyes are showing, are not real. Those pictures have been altered through Photoshop. The evidence for this is found on the Website, nodisinfo.com. The proof for this is irrefutable. His face was altered to make him appear menacing.

Gene Rosen is an actor known to play out skits about children. Rosen was caught practicing his lines well before the time of the claim for a shooting. He was the man who said he took six children into protection in his house in the midst of the crisis. This is not true. He can be seen practicing these very lines via overhead camera (via helicopter) in the morning of Dec. 14 sometime before 10:00 a.m. He can also be seen interacting with a TV producer at this time. Also, as has been confirmed by a direct communication, Rosen is a producer on local community TV, CTV. Furthermore, while Rosen was being interviewed by CBS a solar-powered sign could be seen behind him, ordering all actors to "sign in" before entering the secure area.

Chris and Lynn McDonnell, the supposed parents of the deceased Grace McDonnell, are not real parents and instead are actors. They can be found on network film and also via overhead camera near the firehouse performing their acting skits, often with TV producers in close proximity. This is also indisputable, and there are several examples where they can be seen acting out fake grief, as well as shock, while also being instructed by these producers. Some of the instructions are audible, including one command to start/conclude the act, the producer saying, "OK." 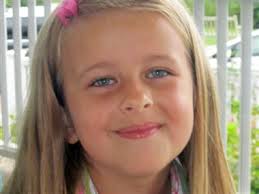 Grace McDonnell, who was supposed to have died in Sandy Hook, is not a real child. Instead, she is a pure and undeniable creation of Photoshop, the proof of which is found on nodisinfo.com. There was/is no person by this name living in the Newtown/Sandy Hook area or, in fact, anywhere in Connecticut. Thus, the claim that this child died in a school-yard massacre is a categorical lie, simply due to the fact that such a person doesn't exist.

Donna Soto is not a grieving mother of the purportedly dead teacher, Victoria Soto. Instead, she is an employee of the Department of Homeland Security (DHS). Soto, a paid actor, was caught in the act via news footage, where she was filmed standing next to the side of the firehouse on Dec. 14 sometime before 3:o0 p.m. with a taxpayer-supplied DHS water bottle in her sweatshirt, checking her text messages. Prior to this she was seen acting out grief with purported son Carlos Mathew Soto, where she was surrounded by two TV producers. The fact that these were TV producer is beyond doubt and has been confirmed by news film. 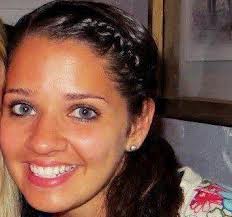 (l.Vicki. Pics of Donna nowhere to be found)

A TV producer, name unknown, who was assisting Donna Soto in her fabricated grieving act, was caught on film faking grief herself near the corner of the firehouse, in the mid-afternoon, exact time unknown. The fact that she is Soto's TV handler is proven by the clothing she wore and her style of purse in her possession when she was instructing Soto.

Robbie Parker, the supposed father of a murdered girl, Emilie Parker, was caught smiling in glee just before doing his CNN interview, while also asking if he should read from the script or speak spontaneously. Just prior to his interview Parker was seen "getting into character" by taking bizarre-appearing deep breaths and dramatically changing his facial expression. During this time instructors and handlers can be seen instructing and guiding him. A photo is available showing Parker holding in his hands the script.

The deceased school principal Dawn Hochsprung, below, springs back to life in Boston. 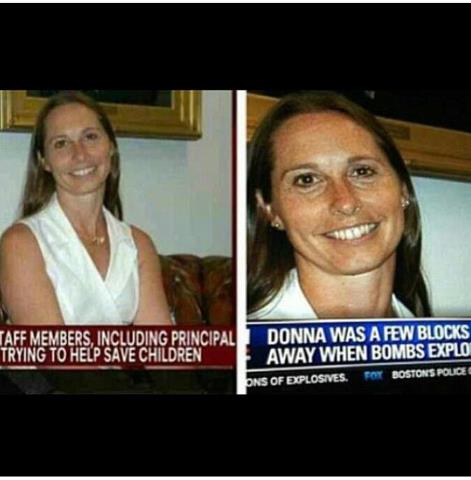 Dawn Hochsprung called the Newtown Bee on Dec. 14, about 10:00 or so a.m., saying that there was a shooting at the school. The official reports have her dead by that time and the shooting already over. When questioned about this, the Bee originally confirmed that this call was made by Hochsprung, saying, essentially, "Well, we know her."

Krista and Rich Rekos were caught posing before cameras early during the day on Dec. 14, like the McDonnells, right at the corner of the firehouse. When before the camera, Krista Rekos suddenly put on a display, acting as if she was in shock. 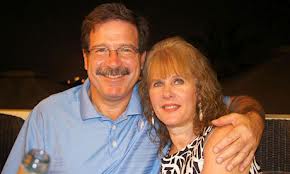 A school psychologist by the name of Mary Sherlach does not exist as an actual employee at Sandy Hook Elementary School. There is no licence for such a person and instead, suspiciously, her licence was issued only in 2013. The woman pictured as Mary Sherlach has been identified as Jane Vogel Brickell and, thus, Mary Sherlach is an alias. Ms. Brickell has been determined to be alive and well, living in New York. Morever, this individual is not disputing this finding, because she knows it to be true. 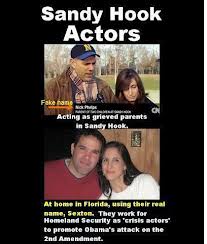 In two different CNN interviews actual actors using aliases from an entirely different state were uncovered. Posing as Nick and Laura Phelps, the real names for these actors are Richard Sexton and Jennifer Greenberg-Sexton, who are residents of Florida. Their role was to act as begrieved friends of Dawn Hochsprung, while also claiming to be parents of Sandy Hook grade-schoolers. In real life these individuals are in not parents of any Sandy Hook children. In fact, their children live in Florida and were formerly students of Gotha High School. In other words, the people posing as the Phelps' do not have grade-school-aged children, their daughters being in their teens. Thus, everything that these two actors said on CNN was a lie.

The oft-seen picture of children being led out of the school by an official-looking woman in a blue jacket is not from Dec. 14, 2012. Rather, it is  from Oct. 17, 2012, a fact which has now been fully confirmed. So, when it was said by the media that "A horrific shooting Friday morning at Sandy Hook Elementary School in Newtown," while this is combined with the picture, this is an attempt to scare and intimidate people into believing in the official story by creating the impression of frightened children being led out of the school, when this really never occurred.

The Department of Homeland Security (DHS) and other elements of the federal government were swarming all over the Sandy Hook region and were fully in place before the time of the acclaimed shooting. DHS agents were seen driving  their black antennae-equipped vehicles by precise eyewitnesses as early as 8:30 a.m., well before the time published for any attack. The black and other dark-colored government vehicles were seen racing about with serious-looking men inside by local Sandy Hook residents.

According to veteran news reporter for criminal events, David Owens, the entire operation of Sandy Hook was controlled from the beginning, early on Friday morning. The powers in total control of this event were "Washington, D.C." and the "Justice Department." Noted Owens, 'local police of Newtown and State Police' are not responsible for any discrepancies or errors in the reporting. That all came from federal sources (direct communication). That means that the entire event was orchestrated by the Obama White House.

A first installment in a series. Idea thanks to a nodisinfo.com reader. She has advised people to hand this simple sheet out and also post it, where appropriate.

Proof Boston was a False Flag     by Alex Jones

MAKOW COMMENT: we have to ask why these false flags are so transparent.

The truth about these stage managed"atrocities" has been bouncing around the public domain for some time now and its good to see a
respected website like yours picking up and breaking the cresting wave
of this emergent truth to a greater audience.

I believe its no surprise that the Senate threw out every one of the Gun control proposals that Obama has been inventing these pantomines for as they could see which way the wind was blowing and didnt want to get caught with their pants down. So there you have it public opinion
did carry the day. DHS had better get ready to use those billions of live rounds they have been purchasing before the angry population
repossess them on behalf of the Constitution.

There is an excellent hypothesis about the identity of the shooter discussed at Godlike Productions: http://www.godlikeproductions.com/forum1/message2196724/pg1

While merely speculative, this scenario makes far more sense to me than the official Adam Lanza story. Interesting that the viewing public has been inundated with gun control rhetoric from a select few family members of the victims, but we have yet to hear from potential VIPs such as Daddy Lanza (we never heard much from him, did we?), the father that was supposedly caught running in the woods behind the school (there to build gingerbread houses, really?), or from the woman who was carted away from the scene by stretcher (the only eye-witness, besides nurse Sally Cox).

There is an excellent hypothesis about the identity of the shooter discussed at Godlike Productions: http://www.godlikeproductions.com/forum1/message2196724/pg1

While merely speculative, this scenario makes far more sense to me than the official Adam Lanza story. Interesting that the viewing public has been inundated with gun control rhetoric from a select few family members of the victims, but we have yet to hear from potential VIPs such as Daddy Lanza (we never heard much from him, did we?), the father that was supposedly caught running in the woods behind the school (there to build gingerbread houses, really?), or from the woman who was carted away from the scene by stretcher (the only eye-witness, besides nurse Sally Cox).

The "powers that be" that arrange these "half-ass" Psy-Ops with their B actors like ones at Sandy Hook are really failing miserably in the cover-up department. Their confidence in the ability to decieve the American public must really be at an all time high.