Vacationing in a Paradise Disaster 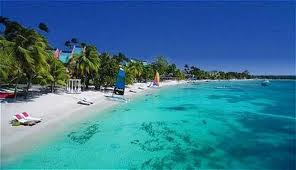 (Negril beach, my front yard for a week)

Visiting Jamaica, you don't know
if you are taking a vacation
or performing disaster relief.

I couldn't wait for winter to end any longer and flew down to Montego Bay Saturday on the spur of the moment.

Visiting Jamaica, you don't know if you are taking a vacation or performing disaster relief.

Unemployment is 30% The economy is a mess. You have the feeling that a ship has sunk and the water is full of people trying to keep afloat.

I have the impression that the bankers are squeezing Jamaica like Greece et al. Two people have mentioned a big IMF loan. I heard a radio talk show on the shuttle-bus to Negril. The people are restive and the government is using brutal police repression. Gunmen stole $15 million in fuel from a Shell Refinery last week. It sounds like a war zone. Guess who the government represents?

Is this a harbinger of our future in the New World Order?

It's weird vacationing in paradise and finding it inhabited by people engaged in a desperate struggle for survival. It's hard to ignore them because they are constantly trying to befriend you and help you or sell you something.

They are trying to keep their dignity and stay on the right side of the law while relieving you of money. They don't rob you. Not in the usual sense. They overcharge you or shortchange you.

I have been in Jamaica 48 hrs and have been ripped off 6-8 times.  Right away, the currency exchange shortchanges you. Then, the taxi monopoly at the airport wants to charge $15 for a 5 minute ride. The cashier at the restaurant shortchanged me and was embarrassed when I caught her. When she gave correct change, I left it as a tip.

I felt like I was being eaten by piranhas, bones picked clean. They must see tourists as wooly sheep to be fleeced. (To be fair, the shuttle bus and hotels have been scrupulously honest. My hotel in Negril is good value and full. Jamaican cooking is honest too. They take alot of care.)

But everyone wants to sell you something. I wonder how we would behave in similar circumstances? Would we be able to hold on to our dignity?

Some have a solicitous vibe to convey their desperation for a tip. I'm taking an expensive vacation among people who can't feed their children.

The tourist spots in Montego Bay and Negril feel like Cairo. No one there. Yes, the planes land full of tourists. Where do they go? All inclusive resorts?

Montego Bay has no long public beach. The "tourist strip" is a tawdry affair. The street is lined with souvenir shops. The sidewalk is narrow. The occasional tourist is besieged by hustlers. Where's the charm?

Moved to Negril Sunday and have a room on the seven-mile-long beach. Paradise.  The town still has vestiges of natural charm. 30 celcius and sunshine every day.

I carry a limited amount of cash. It's the only way to avoid paying x3 the real amount. "This is all I've got," I say. They usually take it for sunglasses or a sun hat.

At the bank, a young boy and an old crippled man vied to open the ATM door for me. When I emerged I gave $1 to the boy. "I haven't eaten," said the old man.

"I'm sorry," I callously wave him off. "I can't give money to everyone who asks."

Later I wondered why I chose the boy. I thought they were together but they were in competition. What if he was hungry? I can't feed everybody.

There was a great live show next door Sunday night. Nobody there but me and Kevin, a beach vendor smoking a joint, and a prostitute.

Kevin tells me the economy is bad. He invites me to witness the poverty inland. I decline. "It's painful to see," I tell him. "I can see it here."

Before long, he invites me to donate for refreshments and attend a "grave digging" (funeral) to be held Wednesday 15 miles from here. It's for a beloved member of the beach community who died in a car crash two weeks ago.

I agree. I can feed a few. Might as well attend a "grave-digging" and get my mind off my own problems, I think.

But I later change my mind about going. One of Kevin's friends snickered when I was being introduced. I don't want sympathy to deceive me.

Instead, I'm going to do a Google street view of this beautiful beach in my mind. No matter how ugly the world might become, this slice of heaven will be in my mind.

Jamaica is suffering 'austerity' by the IMF sharks.  The pattern is standard.  This is how Globalism works: in the little countries, costs for necessary imports shoots up, so the local population is sucked into an bottomless pit cycle of debt.  There is a blackout on this on American mainstream and most 'alternative news'.

Once the jewel of the Caribbean, the IMF and it's economic hit men have been undermining the Jamaican economy since the mid 1970's. By 2012 they had them down for the count when they gave them another $1.7 Billion dollars under the usual usurious terms.Last week (Apr 9th 2013) ABC news announced the IMF has 'rescued' Jamaica again with another loan of $958 million - just to keep the lights for four more years.

The IMF's agenda isn't to help countries recover or prosper, they're purpose is to destroy national sovereignty and independence, creating Global Feudalism.

As you can see there's no benefit it this for the average Joe - it only means your chances of being mugged or shorted become a standard part of a vacation.

A brief history of the Jamaica Crisis
(Jamaica) IMF decimating one country after another
https://www.youtube.com/watch?v=YoIJPwfsbqg

In more depth:  How the IMF Destroyed Jamaica
http://www.askbutwhy.com/2009/05/life-and-debt-how-imf-destroyed-jamaica.html

Everywhere the IMF goes, once they have a culture by the balls, then comes the gay 'conversation'.

Comments for "Vacationing in a Paradise Disaster"

Jamaicans need to realize that when they screw their tourists, they screw themselves. The same goes for any other third world or struggling nation dependent upon tourism.

To provide another perspective, when a state or a country for that matter, begins to screw over its millionaires, the millionaires begin to leave that state or country. However, millionaires (or richer people in general) must understand that if they are unwilling to spend their money to hire or help out the less fortunate, their millions might be confiscated from them.

Some kind of balance has to be found somewhere between the "haves" and the "have-nots."

One more thing about Jamaica, what has Usain Bolt done for Jamaicans since rising to such fame and fortune? Does he still drive around the island in his expensive luxury car?

You got off easy in Jamaca compared to the hammering I took at the hands of other Third World sharks. More like a replay of what you went through with your Phillippina sweatheart. My Thai "wife" took me to the cleaners to the tune of about a hundred Gs -- not-to-mention, untold mental, and some physical abuse: house, land, gifts, gold, wedding party, 2 year's worth of monthly support (luckily, I didn't cave in about buying the car and another 20 acres) ect.. No sooner do I get out'a the hospital after a stay of about three months on intravenious antibiotics this past October, after nearly kicking the bucket from Golden Staph septicimia, pneumonia and mycoplasma (All disease-causing mycoplasma is a man-made bio-weapon.) , she tells me not to return until after New Year's and that she's working on her aunt's rice farm, then I can't get through to her on the phone, then after persisting, she tells me she's back in the flesh trade working the bars and that she's just "cancelled" me, and then she calls to say she was only kidding and that she never left her home in the village at all, and now we can just continue as though nothing ever happened.

Now that my savings have hit rock-bottom, trying it all over again with a new wife is out'a the question. So, I'm now resigned to being an old hermit, whilst the Illuminati patriarchs have their fun with their stable of sex-slaves. But that's nothing compared to what we're all soon about to go through.

Yes Henry, this is the world's future. This is what eventually happens to all nations that loose their sovereign right to govern themselves and coin their own currency.