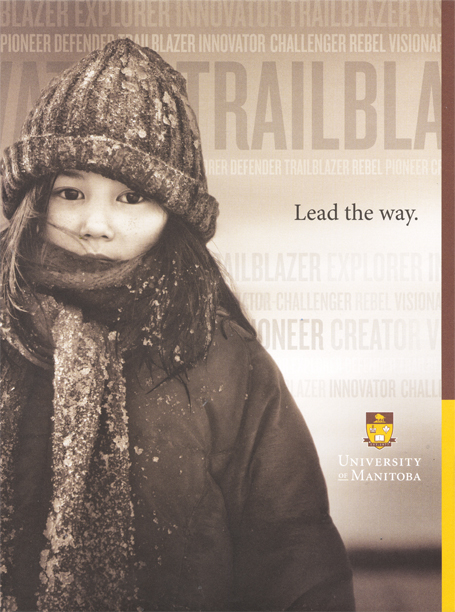 In the New World Order, perception is reality.

Have you ever seen anything more inane than
frostbitten children being touted as world saviors?


The University of Manitoba ranks 301 out of 350 world universities and about 40 of 50 in Canada. But, it is a winner where it counts: advertising.

Returned home Saturday to find the new airport festooned with large murals of little girls touted as future Genghis Khans. They are heralded as (get out your thesaurus) "trail blazers -- leaders, pioneers, visionaries, defenders, innovators, challengers, explorers and rebels." The University of Manitoba is using part of its half billion dollar budget to convince us of this.

The University of Manitoba ranks 301 out of 350 world universities and about 40 of 50 in Canada. But, it is a winner where it counts: advertising. 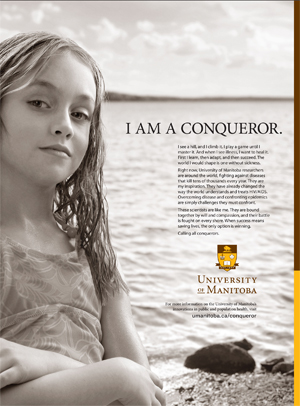 (Left, While we're waiting for little girls to grow up and save us, the bankers will complete their nwo dictatorship.)

"The Trailblazer campaign for the University of Manitoba has earned nine more CASE Communications Awards, including two grand golds. The university was also honored with the prestigious 2013 Virginia Carter Smith Grand Crystal Award, which recognizes the year's most outstanding communications program and is the highest honor for a post-secondary institution marketing campaign in the CASE District VIII. The Trailblazer campaign celebrates the geographic and human landscape of Manitoba and the transformative power of the province's largest university - that where we are shapes who we are.

"Two years after the launch of the Trailblazer campaign, we're thrilled to watch it continue to transform the image of the university," said MCG CEO and president, Peter George. He said using kids in the campaign was a good entry point, and one that isn't oft used by other universities...we're thrilled to watch this campaign transform the image of the university."

In a release, Lori Yarchuk, marketing manager at the university, said the province's prairie landscape challenges students, faculty and researchers to thrive. "Because of where we are, we have unique opportunities to explore, to create, to innovate - all traits that are highly prized in the academic world," she said.

In January 2012, world class math professor, Gabor Lukacs, 28, was expelled from the University of Manitoba for trying to maintain academic standards. He was a child math prodigy who began university at the age of 12, received his master's degree at 16 from Technion (Haifa) and earned his PhD from York University in Toronto at 20. 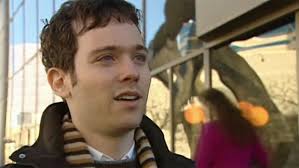 According to the Winnipeg Free Press, "Lukács had challenged the university administration's decision to award a PhD to a student who had failed a key exam twice, waived the necessity for the exam and exempted the student from some other academic requirements. The student claimed he had failed the exam due to a condition known as "exam anxiety."

Lukacs is the kind of person society needs. He is a real trailblazer, not a girl-child. Just last week, he forced Air Canada to properly compensate passengers who are overbooked. He is currently doing independent research in Halifax.

But universities like Manitoba don't care about real trailblazers; they make the lifers uncomfortable. These schools are sleepy backwaters dedicated to sports, indoctrination and providing comfortable sinecures for professors. Their marketing departments generate all the intellectual excitement.
------
Winnipegger comments on looming budget cuts at U of M

"What I don't get is the amount of money U of M spends on silly billboards and ads of kids standing in the snow? What a silly waste of money. It's not that students pay even close to the cost of educating them. So whats the point of view of branding the U of M other than a cold lonely place?"

Comments for "University of Manitoba Ranks First in Hype"

What stomach churning hypocrisy from these taxpayer-funded state institutions. Same is true in the US. Let's see: the universities seek "Challengers" and "Rebels"? Try publicly challenging the illegality of the federal and state income tax, or questioning the official lies surrounding 9-11 and the Mideast wars. Or the scam of private central banking. On and on it goes.

I had to do a year of military service after High School. After that, I entered the working world in the Banking/Insurance industries. I continued with in house training and courses, and worked my way up in the companies I worked for. I also spent a lot of time in the library educating myself on a wide range of topics from science to politics.

I believe that I received a far more balanced and well rounded education than my friends who went to collage and university. My best friend went to study Clinical Psychology, and practiced in Hospitals and Private Practice.

He now has left that field, and runs a Bed & Breakfast Establishment in a small country town. Although I count him as my best friend, I believe that his "Education" really messed up his mind. He is not very self confidant, and has not yet found his "Identity". I don't see that his education benefited him at all.

My sister did get a good education, she is a Medical Doctor and she happens to be temporarily working at a small hospital in Manitoba for a year before she returns to South Africa. So, I suppose it depends on where and what you study and how you use your skills to enrich your fellow man.

I thought that I had graduated from the U of Oregon but a visiting professor from Nigeria failed to submit my grade for a elective class - Women in the 3rd World. I was notified 6 months after graduation that I was 3 credits short. I had moved to Seattle after commencements and was busy running my newly started business and didn't think of protesting.

Twenty five years later I looked into filing a petition and found out that I needed to take newly required credits in diversity training which amounted to almost another term of classes. That diploma means nothing to me as I have been very successful and blessed with many God given talents and treasures. The last thing I want to subject my mind to is brainwashing diversity training. If that is what is required to receive a college diploma, my suggestion would be to skip college and spend your time studying the classics. Modern academia cannot hold a candle to an 18th century curriculum.

My take away from college was that I figured out how to learn and I'm convinced that anyone could save a hundred thousand dollars and gain greater wisdom from setting their own curriculum and not following the crowd off the liberal secular college campus cliff. I received my education not in academia but in my continual day to day life.

We have a free will to choose what we want to do with our time. I suggest turning off the tv and picking up a good non-fiction book. Self education is one of our greatest assets and in this day and age, one that is greatly neglected by many.

Pity the unfortunates who will wind up as subordinates of these women who have been imbued with the conviction that they are "conquerors"!

This story is amazing, even for this venue. The U. of Manitoba is truly like Superman comics "Bizzaro World".

I read the link to the Winnipeg Free Press article. Lukács was fired from the U of Manitoba, because he didn't accept their decision to award a math Phd to a student that flunked his finals. In that regard he was definitely in the right. With no explanation for why the univeristy sided with the student's excuse of "exam anxiety", I am left perplexed by the University's decision to dismiss a perfectly good professor for tryhing to do his job It would seem to reflect badly on the U. of Manitoba for firing a competent math professor over what appears to have turned into a turf battle.

I hated college so much because of the candy-ass communist material that I had shoved down my throat. It was so bad, I just got up out of my chair and walked off campus, not even bothering to withdraw from classes. That was around 1968 and I never looked back. They have nothing to teach anyone. I never regretted that move.

Henry, half a century ago my mentor, Paquita de Shishmareff, had labeled U.S. education "planned ignorance." I suppose she could have included Canada in that accurate description.

But today there is a new element. Now the accomplished ignorance is followed with massive propaganda, programming students to react to certain buzz words and phrases designed to further the anti-people police state being used to re-establish ancient Oriental slavery, now called "the new world order." Teachers are themselves programmed to be the programmers, referring to themselves in private as "change agents," not as teachers.

Reminds me of the audience's introduction to the fictional Tate University in Harold Lloyd's silent movie "The Freshman" (1925): "Tate University - a large football stadium with a college attached."