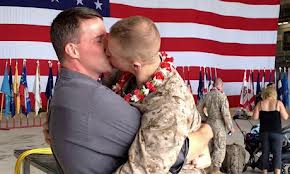 Cabalists  consider it "magic"  to achieve their Satanic  goals using deception and coercion. They pretend that things that are different, like heterosexuality & homosexuality, must be treated as the same in the name of "equality."

If you protect your own identity -- sexual, national, racial or whatever -- you're "a bigot." The real agenda, of course, is to destroy our institutions and destabilize society.

Here, Michael Hoffman describes the psychological coercion that has
made Americans forfeit their national traditions, values and interests.


"In a little more than 50-years the golem-goyim of America have permitted the surrender of our nation to those who make a love canal out of the sewer of the human body."

(See response from Aloysius Fozdyke below) 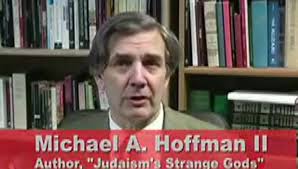 
A common misconception has it that the word goyim denotes cattle. Goyim denotes ger, "the other," the "foreigner," the "stranger;" there is nothing bovine about it.

Golem is another story, however. The golem is a zombie created by a rabbi destined to serve and then be destroyed by him. The golem element among the American goyim has arisen through the bestialization of white American gentiles to the level of golem. As long as he has food, shelter and sex, a beast will tolerate most anything.

Three thousand years of Western teaching against sodomy has been swept away in the past ten years. "Homophobia" is now a hate crime throughout the West, with exception of Russia, where legislation forbidding homosexual propaganda was passed by their parliament by a vote of 436-0. (Memo to Russians: Pray for the conversion of America.) The sodomite tyranny is imposed mostly by judicial fiat, which is the Talmudic method of legislation.

It isn't only the shocking nature of the changes imposed by the revolution, it is the speed by which three millennia of Western Christian civilization have been swept away since the rise of the sodomite-imposed rights movement in the 1960's. In a little more than 50-years the golem-goyim of America have permitted the surrender of our nation to those who make a love canal out of the sewer of the human body. 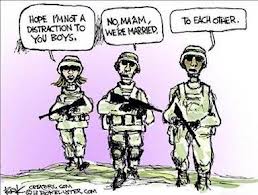 Whether it is sodomite supremacy or the national suicide that constitutes illegal alien amnesty, the kleptocracy establishes a psychological milieu in which our "failure" to adjust to revolutionary demands is portrayed as an inexcusable act of bigotry. They create a pressure cooker inside-of-which psychic tension builds until at last we surrender our heritage and principles.Then a wave of media-cued relaxation and good vibes is released --- until another demand is endorsed by the media for the enactment of the next plank of the permanent revolution, facilitated in part by the "Conservative icons of the goyim-golem.

This process does not entail compromise or give-and-take. While it is true that the revolutionaries may at times take one step backwards in order to advance two steps forward, as in the Clinton era's "Don't ask; don't tell" policy on sodomites in the military, which bore only the appearance of compromise. It was actually an incremental step toward what the sodomites achieved a few years later with full acceptance of rectal sex in the military and "marriage" at military chapels. 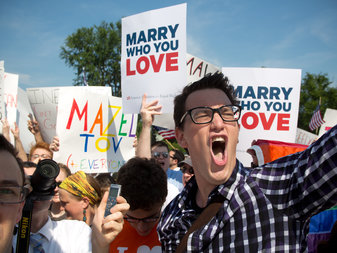 In truth, the We must constantly adjust to their agenda or we are bigoted, hateful or obsolete. Heritage, tradition and its wisdom are bound for the trash bin. The ideology of the past few decades somehow trumps all the centuries that went before. The devils serve their god with %100 zealous fervor and are termed moderates.

The representatives of the civilization that bequeathed to us the rights we once enjoyed and the rule of law that formerly protected those rights, including the property right to refuse to employ, accommodate or house those who deeply offend our beliefs, are now charged with "intransigent extremism." Meanwhile the intransigent extremism of sodomite supremacy and the national suicide of amnesty for an illegal alien invasion are alchemicalized into the apotheosis of kindness and reason.

---
This is a short excerpt from an article, Golem-Goyem about to give it all away with Amnesty to Illegal Aliens, in the May-June issue of Revisionist History,  available by subscription only.
Michael Hoffman has unmasked Judaism in his books Judaism Discovered and Judaism's Strange Gods.
-------

One of our teachings is that "Bum Sex Is Good". I've written about this before. Sodomy is extremely important to the Alpha Lodge. 'Sex before eight or else it's too late!' And of course we are continuing to achieve our aims. As I've asked before: Who can stop us? The Dao De Jing counsels, 'Keep the people's minds empty and their bellies full'. Petor was always going on about that. It's good advice that's stood the tests of time.
Legal, socially accepted child sex is the next frontier.
Very few - even in Australia - know anything about the Heiner Affair, but it was a great operation. We have the Australian Governor-General, the current Australian Prime Minister, two former State Premiers and a number of others in our pocket over that one. Really, how much higher can you go in Aussie politics than the Governor-General and the Prime Minister? That's how we work.
While sheeple are on their knees praying to their impotent, mad redeemer we are adepts of action in the world, doing our father's work. And the prayer mumbling sheeple are comfortable in their blissful ignorance (although not for too much longer).
One day, rectal romance; transsexualism and paedophilia will be as common and accepted as The Usher. For the cheapest thing in the multiverse is a human soul.
A.J. Fozdyke
P.s. The  Boston Bombing was a PsyOps. No one was really injured and we'll get the Cyber Intelligence Sharing and Protection Act passed into law.

I've been saying the financial oligarchy has been making monkeys out of our attorneys, politicians and judges for years. I've always believed that these people would only be around for as long as they are needed but I never heard the term "golem" before. I've just never believed in honor among thieves.

Thanks for a wonderfully informative essay.

Being systematically shorn of any remaining spirituality by demon-controlled â€œapexâ€ of the social pyramid non-system, many people are indeed driven down below animalistic levels while deceiving themselves that their lives are â€œsuccessfulâ€.

In constant denial of their conscience-consciousness signals, they toss and tumble like â€œliveâ€ beached fishes and in this, pardon me, scared-shitless self-imposed state of oblivion they push to â€œprobe and plugâ€ any illusory â€œlove canalâ€ to find a momentary relief from their exploding fears and sense of loneliness amid the seemingly insensitive silence of the Universe.
Some â€œscholarsâ€ even call this condition secular â€œhumanismâ€ or â€œmaking humans happy here and nowâ€.

The â€œilluminatiâ€ underlings obey and do accordingly (â€œannuit coeptisâ€) because they too have been duped into believing that by obeying the demon they will save and fatten their asses with impunity and for eternity.

What Iâ€™ve just written is my tentative long definition of â€œthe abomination of desolationâ€. It â€œsoundsâ€ hideously Freudian (I simply donâ€™t favor at length that old â€œSOBâ€™sâ€ ideas), but my imperfect, if yet underailed, brain cannot find better words to capture all that repetitive grind of â€œourâ€ history.

Fozdyke is wrong to suggest the cheapest thing is a Human Soul.

Far from becoming socially acceptable pedophilia will continue to be abhorred by decent people the world over.

People like Fozdyke who seem fond of having things up their arses can look forward to the day of their departure as I confidently predict
these deviants will be publicly impaled one day and given the send off they truly deserve.

The Gay Liberation Movement started in Nietzsche's "God is Dead" Germany with the Nazi "philosophers":

The Nazis were not "conservatives", not "traditionalists", as many people think. They were actually very leftist. Nazi Dasein is based on the very same exact Existentialism which is the ontological foundation of our present day mainstream culture. The Nazis hated Christianity as much as they hated Torah Judaism ; Just as traditional Christians and traditional Jews are disdained and scorned in today's culture. Aleister Crowley was a Nazi "philosopher" also. Crowley played a role in conjuring up Nazi Dasein.

" Nazis And The New Age"

The leftist cultural agenda comes to us from Nietzsche's "God is Dead" Germany with the Nazi "philosophers" -- to a very large degree. Communism is also based on the ontological foundation of Existentialism as well.

The Existentialists always say, "God is Dead". I never hear them say, "Satan is Dead".

I find it very hard believe that A.J. Fozdyke will ever see his demented and depraved wish
that Paedophilia will eventually be both fully legal and socially acceptable. Firstly, unlike
the "Gay Rights Movement" which has seen a growing number of countries all around the
world not only legalize sodomy, but also to grant homosexuals full civil rights, up to and
including legal marriage and adoption, I fail to see how any society will ever accept
Paedophilia, no matter how dehumanized, debased and degraded the world becomes
by way of pornography, trash television, the sewage of Hollywood, widespread promiscuity,
and the promotion of all this filth by the political, academic and media elite, if for no other reason, than children cannot give consent to engage in sexual activity with adults. So I cannot see how even the most intimidating, manipulative, and bullying of legislators, "human rights" lawyers, academics, media personalities, ect; could even persuade even a fraction of the
population to accept the legalization of Paedophilia.

Check out this video of a hateful gay lunatic going bonkers on a college campus, ranting and raving at the top of his lungs about how Christians are responsible for all the ills in the world, including that most ghastly of all offenses - "homophobia." It got so bad the cops had to come and chase the nut away. You can bet this guy laps up, with relish, all the gay propaganda put out by the Jewish controlled media -
http://www.youtube.com/watch?v=HtDh93ByBI8

Whether it be England, France, Germany, or America the Anglo Christians of these "fiat democracies " have compromised critical precepts of their religion to make peace with their adversary, the Anti Christians of the Talmudic Judaic persuasion.

These "duped" Christian Zionists never stop trying to find a common ground with the religion of the "Christ rejecting Jew". They still think they can fit the new wine into the old wineskins.
A lot of preachers today have agreed not to identify homosexuality as "sin" in their public sermons thereby abandoning their own doctrine in exchange for not being harassed by the MSM.

The Illuminati Atheists have slowly painted the Church into a corner. Food, shelter, peace,and financial security in exchange for their souls.

Goy doesn't mean "other" or "foreigner" as Michael Hoffman claims.
Goyim means "Nations" and refers to "other nations" but
Israel is a Goy or a nation...even in the Bible
Exodus 19:6
"'But you shall be to Me a kingdom of priests and a holy nation.' These are the words that you shall speak to the children of Israel."

The word used here for nation, referring to the children of Israel, is "goy". There are countless examples of the Jewish nation being called "goy"

You are out to lunch, or should i say, a deceived goy.