CIA's Dalai Lama: Who Else Does he Serve? 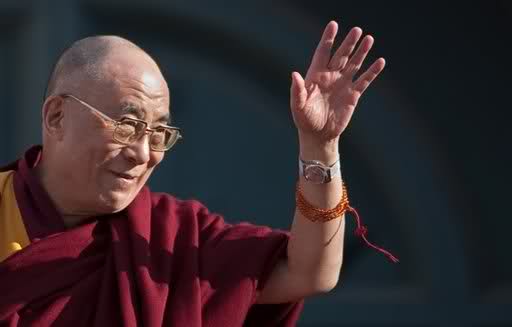 
Does wearing a $60,000 gold watch disqualify someone from being a "spiritual leader?"

Readers raise this and other questions about the Dalai Lama, Tibet and Tibetan Buddhism.

"Paul, 39, is a software engineer living in southern California"
A few facts about him that might be worth knowing:

(1) The Dali Lama wears a $60,000+ solid gold Rolex wristwatch while giving speeches to the great unwashed masses about how much "fun it is to be poor". In fact, he doesn't just wear the wristwatch, but he makes the effort to turn it inside-out (so that the face is on the underside of the arm) and cover it up with several layers of Tibetan prayer bracelets.

In fact, I am fairly certain that Dali Lama is literally an official "brand ambassador" for the Rolex corporation (i.e., one of their official celebrity endorsers, essentially the same job that say Tiger Woods does for Tag Heuer).

If you were to go to Tibet, you would find no fewer than four or five other "Dali Lamas" all contending for the title of being the One and the Great "Dali Lama", and the "Western" Dali Lama pictured above has probably the most dubious and most tenuous claim to that title of them all.

It's something similar to the situation in Rome in the past when there were warring "Popes" and "Antipopes" fighting for control of the Vatican, only with a greater multiplicity of contenders in Tibet. Tibet is a political system like any other, and can be just as cut-throat and underhanded as any other.

Indeed, Tibetan Buddhism dates to no earlier than roughly 1400 AD in the Western calendar. Prior to that, Tibet had an occult tradition, but it was not based or grounded in Buddhism (of course, Buddhism itself dates to 500 BC, but was practiced largely in India and China prior to arriving in Tibet). Westerns should note that this makes European Christianity a (vastly) older and more ancient system of Spiritual enlightenment than anything sourcing from Tibet under the name of "Buddhism". 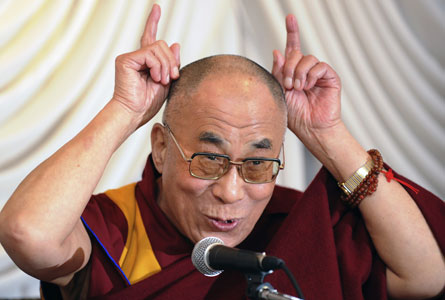 (3) Expanding further on Tibet and the Occult, it's worth nothing that in the opinion of many (East) Asians, Tibet is not an especially happy place. Rather, they tend to view Tibet in much the same light that we might view the Nazis -- a place of dark, forbidding Satanic occultism, and a place to be avoided, rather than "cherished". While many Asians may detest Communist China, they tend to detest Tibet even more -- owing to very ancient, occultist fears of Tibet on the Asian continent -- and are not necessarily shedding any crocodile tears as they watch Tibet getting smashed up by Communist China.

Tibetan reliquaries tend more towards the demonic than they do towards anything holy or divine (i.e., google "Tibet demon" to see the standard ornamentation that adorns most Tibetan temples). Tibetan temples are awash with swastikas, and although that's a symbol that's been highly misunderstood in the 20th century, there is a very strong connection between Tibet and the Nazis. The connection was famously highlighted in "Raider's of the Lost Ark" where the first major Nazi-chasing scene is set in Tibet, but the fact is that the connection was (and probably still is) very real.

The SS "Deutschen Ahnenerhbe" spent an enormous amount of time and money excavating in Tibet, and indeed, many of the major Nazi doctors did a tour of duty in Tibet. Reading the histories, one gets the sense that these doctors went off to Tibet as regular, normal people and came back from Tibet as stark, raving lunatic serial killers. One gets the sense that something in these people snapped while they were in Tibet.


"Any impression that the Dalai Lama is some kind of Messiah is a projection of our own religious conditioning."

American perception of Tibet and the Dalai Lama bordered on whimsy till pretty recently.  First is the size. Most think it must a very small, remote place in the Himalayas like Nepal.  In fact it's the size of Europe - 2.5 million square kilometres.

I discerned the truth about Tibet and  Tibetan Buddhism when I was put into contact with a large compound called Odiyan in Northern California.  There's not room here to go into full details of the circumstances that put me contact with the gatekeepers or procurers for this place.  All I can say is I found that every classic symptom of communal cult permeates Tibetan Buddhist society.  It is first of all a real theocracy, a throwback to the Middle Ages.  It's even worse because their teachings on reincarnation are nothing but the rationale for a rigid, feudal caste system.

It took me a long time to find the complete history of Tibet because for decades Foundation-controlled public libraries only carried the fairy tale propaganda version.   Why would the Dalai Lama's youth make it unlikely he was running some kind of "police state" ?    It wasn't a police state, it was a feudal state in which peasants and serfs were told they earned their servitude and suffering from a previous life.

Tibet had been a closed society due to inaccessibility until the 1940's.  The concept of human rights was simply unknown in the whole culture, because the serfs were totally trained to believe they deserved their fate.  If you go into a Tibetan monastery in America or Canada as a 'volunteer', you may notice that there's some emotion lacking.

It's empathy.  We in the West whether from a Christian, Jewish or Muslim background at least understand empathy.  It simply isn't recognizable in Tibetan arrangements, in my experience.  It is a very different culture.  Any impression that the Dalai Lama is some kind of Messiah is a projection of our own religious conditioning.

The office of Dalai Lama was created by the  Mongol war lord Altan Khan (of the Kubla Khan dynasty) in the late 16th century.   Also the Dalai Lama was never addressed as "His Holiness" until he immigrated to the West.   To his own culture Dalai Lama is itself the title, which translates "big ocean guru" and means 'vastly aware Great Teacher'.

New Age Vegans go into denial when they're informed that the Dalai Lama loves McDonald's hamburgers. When caught he laughed and explained that he's not prohibited from eating meat, as long as somebody else orders it for him.  This story rang true with me, for I was told by a college pal from Bombay that Muslim markets in India crack eggs for Hindus because if an egg is cracked, the Hindus can eat it.   You know, since it was 'karma'.
------
First Comment from Joe:

Comments for "CIA's Dalai Lama: Who Else Does he Serve? "

I canâ€™t reconcile how a person of the Dalai Lamaâ€™s socio/political status could be in with the CIA but not know about it. He appears to hob-knob with various global dignitaries with the air of an opportunist, associating with these destroyers of all things good and proper, as if all those in positions of power or influence, are, by dint of being powerful or influential, on a rosey and benevolent â€˜Pied Piperâ€™ trip. Itâ€™s called â€˜At the troughâ€™ in other parlance. Knowingly â€“ active, or unknowingly â€“ passive, the effect is the same where the rubber meets the road.

Another glaring indicator of a farce is his meat eating. The genuine Buddhist would never consider exploiting animals. This alone nails him. Here is one interesting quote from Srimad Bhagavatam where Lord Buddhaâ€™s appearance is predicted :-

â€œThen, in the beginning of Kaliyuga, the Lord will appear as Lord Buddha, the son of Anjana, in the province of Gaya (Bihar), just for the purpose of deluding those who are envious of the faithful theist.â€

In the commentary to this verse, the mahatma Bhaktivedanta Swami Maharaja makes the observation:-

â€œAt the time when Lord Buddha appeared, the people in general were atheistic and preferred animal flesh to anything else. On the plea of Vedic sacrifice, every place was practically turned into a slaughterhouse, and animal-killing was indulged in unrestrictedly. Lord Buddha preached nonviolence, taking pity on the poor animals.â€

I watched a few YouTube vids of the Dalai Lama speaking, and I noted his liberal use of the term â€œI thinkâ€¦â€ My understanding of the spiritual path gives little credence to speculators of such magnitude. The reincarnation of a great soul, having trained for lifetimes in the precepts of a genuine spiritual tradition would tell it as it is, sans all the â€œI thinkâ€¦â€ waffle.

People of this age (Kaliyuga) have little acumen in terms of spiritual discernment. As a result, we witness masses following the Sai Babas, the Maharajis, the Kripalus, the Mormons, the Jehovahs Witnesses, the Rajneesh, the Jim Jonesâ€™s, the Catholics, the ISKCON etc, etc, etc. I bow my head in embarrassment, as I have been severely duped in the past. Talk about â€˜The School of Hard Knocksâ€™!

Anyway, for me, this Dalai Lama issue, especially the way itâ€™s propagandized on the global stage, raises a big red (wellâ€¦maroon then) flag!

That watch says volumes. So much for alleged non attachment to the world and worldly things.
Not unlike the Popes wealth. Their actions speak so loudly I cannot hear a word...

Here are some related links you and your readers may find VERY INTERESTING:
http://www.trimondi.de/SDLE/Index.htm
This page has 2 hyperlinks which show contents of The Shadow of the Dali Lama.

I found this via gnosticliberationfront.com

I know that the Dalai Lama may have some agreements with the CIA but what if he himself has been duped? Even if he is not, what kind of leader would do nothing when thousands of your own people have been genocided or imprisoned by ruthless Maoists/Communists (funded by Rothschild) who don't give a shit about spirituality and only care about the gold, uranium and other $100 billions of mineral deposits that Tibet has to offer. (http://goo.gl/mJsnVw)

Has anyone bothered to read any book written by the Dalai Lama and tell us he is not one of the profound spiritual thinkers of this age?

This is a poor article laden with low quality research, personal opinion and typos. Does Paul the author even know how to spell the subject of his article correctly? (Its Dalai not Dali). I dont know what the author's agenda is, but saying "Westerns should note that this makes European Christianity a (vastly) older and more ancient system of Spiritual enlightenment than anything sourcing from Tibet under the name of "Buddhism"." is just plain stupid. If by virtue of being older, doesn't that make Hinduism the one true religion and everything after that just a copy of the truth? or are you too scared to research the missing years of Jesus's life to see that he traveled to the East to learn from Hindu and Buddhist teachers and when he left to introduce these ideas like re-birth and karma to his people, it got him crucified.