The Real Meaning of Yom Kippur 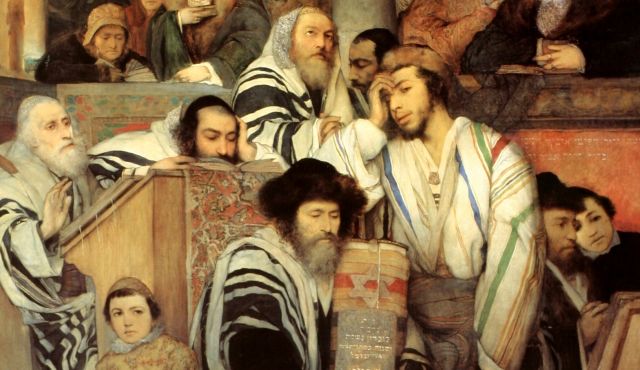 According to Michael Hoffman, the world's foremost expert on Judaism, the "Day of Atonement" isn't about atoning for past sins so much as getting permission to deceive Gentiles.

"Talmudists like to have an edge and during Yom Kippur that entails making God a senior partner in the sting."


In 2013 Yom Kippur begins Friday evening, September 13, wherein the western world will watch in awe as "pious Jews" allegedly "beg God for forgiveness" while supposedly "striving for righteousness." No doubt that the pope of Rome and the heads of the Protestant fundamentalist churches will convey their esteem for the Yom Kippur ceremony as performed by "God's people."

On Yom Kippur the infamous Kol Nidrei [prayer] takes place, almost always explained away to the public as a blessed ceremony of begging God for forgiveness for oaths that were violated, contracts that were broken and promises that were not kept in the past year. The trouble is, that pious picture is a phony.

In truth, Kol Nidrei is a ceremony whereby:

1. all the perjury you will commit in the coming year and

2. all contracts you will sign and violate in the coming year, and

3. all the promises you will break in the coming year,

are absolved, with no heavenly punishment accruing as a result.

That's the reality of Yom Kippur's Kol Nidrei rite, and it's one reason why Yom Kippur is the best-attended of all of Judaism's synagogue ceremonies. Talmudists like to have an edge and during Yom Kippur that entails making God a senior partner in the sting.

The truth about the Kol Nidrei liturgy is usually dismissed by the rabbis and their mouthpiece media as a "loathsome antisemitic canard." They hurl this mendacious accusation in the expectation that the public will be so intimidated by fear of being labeled "antisemitic" that they will not consult the documentation, and will instead accept at face value the word of the noble rabbis and the always truthful media.

The American media reverentially showcase the pious Yom Kippur extravaganza of Pharisaic displays of penitence and purification, fasting and prayer, that allegedly give evidence of the supposed special relationship which Talmudists enjoy with God. Quite a gaudy show is made of the confessional Viduy comprising the Ashamnu and the Al het, the catalogue of sins which is meaningless as a form of self-accusation, since the Judaic recites the whole litany, whether he is actually guilty of each transgression or not.

After the recitation of each transgression, one is to strike the left side of one's chest with one's right fist. This is followed by the prayer of supplication, Avinu malkenu and the Alenu, the so-called "mourner's kaddish."

All of this makes an impressive Yom Kippur Eve accompaniment to the promise-breaking Kol Nidrei  and demonstrates that rather than moving them closer to God, these ceremonies move Judaic persons who are adherents of Judaism farther away, by making God into an accomplice to deceit and oath-breaking, surrounded by a hypocritical show of piety and penance.

The Talmud in Mishnah Hagigah 1:8(a) admits that there is no Biblical basis for the Kol Nidrei rite.

Rabbi Moses Maimonides confirms that the Kol Nidrei rite is not in any way Biblical: "The absolution from oaths has no basis whatever in the Written Torah" (Mishneh Torah, Sefer Haflaah, Hilkhot Shevuot 6:2).

The Talmudic law concerning the Kol Nidrei rite is as follows:

"And he who desires that none of his vows made during the year shall be valid, let him stand at the beginning of the year and declare, 'Every vow which I make in the future shall be null." (Babylonian Talmud: Nedarim 23a and 23b).

Note that the Talmud declares that the action nullifying vows is to be taken at the beginning of the year and with regard to promises made in the future.  This distinction is critical since it contradicts what the deceivers claim is a penitential service for begging forgiveness for promises broken in the past, rather than what it is: a nullification made in advance for vows and oaths yet to be made (and deliberately broken with impunity).

This "advance stipulation" is called bitul tenai and it is the basis for a Judaic being absolved in advance of breaking promises that he will make in the future, or to use the rabbinic lawyer's jargon: "declaration of intent for the anticipatory invalidation of future vows."

This corresponds to the Talmudic lesson that God rewards clever liars (Kallah 51a).

You have to pity people ensnared in this sordid charade of cajoling God into helping them cheat.

Little of this harsh reality will surface in the next few days, however. Instead, the corporate media will spout warm and fuzzy shibboleths about Yom Kippur as part of the sly masquerade by which Judaism ascends ever higher over the West, while its adherents sink ever lower in moral turpitude.

To all those "Christians" who, rather than seeking to rescue the pitiable Judaics who are captive to this system of institutionalized religious dishonesty, instead abandon them to it, we can only say, may God have mercy on you for the hateful part you are playing in cooperating with the Orthodox rabbis in permitting more Judaic souls to be lost to the Father of Lies.

Hoffman is the author of Judaism Discovered, and Judaism's Strange Gods, as well as introductions to Johann Andreas Eisenmenger's The Traditions of the Jews and Rev. Dr. Alexander McCaul's The Talmud Tested. He is the editor of Revisionist History Newsletter. In 2012 Hoffman was named a "Soldier of the Cross of Christ" by the nationally circulated newspaper, Christian News.


Makow Comment - Most Jews do not celebrate Yom Kippur or, if they do, are unaware of (or would dispute) this interpretation. The Kol Nidre prayer is in Hebrew. However I would not be surprised if what Hoffman is saying is true for an "initiated" minority.

Related - What Jews think Yom Kippur is About

My research shows that the  Kol Nidrei didn't originate before the early Middle Ages, in response to ban against Jews marrying Christians, and episodes of forced conversion.  So the tradition seems to have started while the Talmud was being written, and it came about to excuse Jews from oaths of Christian conversion that they were coerced to swear.   There's nothing Biblical about it. The Kohanim Temple priesthood was long extinct before the tradition began.  Certainly it didn't come from a burning bush, but from the rabbis centuries after the Mishnah.

From my own experience with Catholics and various Protestant denominations, average people belong to these religions because they think it's their heritage. Beyond that, most 'go through the motions' without understanding or remembering half of what's said in any liturgy. That's why music is so important in churches and synagogs.  The song for the Kol Nidrei sounds like the way a newborn baby feels safe and rocked in it's mother's arms, and that the source of the 'warm fuzzy' lots of 'not particularly Orthodox' Jews remember about Yom Kipur. \

Michael Hoffman was a powerful exposer of the way the world works until he fell into the trap that's kept so many brilliant culture warriors chasing their tails in the cul-de-sac of the Christendom vs Judaism dialectic.  With great respect to Hoffman - I continue to read everything he writes - and there are cliques of Jews that do believe they are the Masterace and 'goys' are fair game, but most are SHEEPLE, which the real 'ascended masters' that run the world the world treat about the same as they do the 'other' herds.  It doesn't help us all to be divisive.  Within the last ten years, anybody can read the Mishnah Torah online, and even read the uncensored Talmud.  I think it's better to read it on the Jewish sites that are put up for Jewish yeshiva students.

Comments for "The Real Meaning of Yom Kippur "

Discovering the existence and meaning of the Kol Nidre in mid-life immediately made clear all past injuries I had endured at the hands of Jewish acquaintances over the course of my life. As if to drive the point home, some years ago I was having a "spirited discussion" with a Jewish woman about the Arab-Israeli conflict. She of course took the position that all Muslims must be wiped off the face of the earth, the sooner the better.

I countered with "Don't Jews also believe in the 10 Commandments like Christians do, including the one that says 'Thou Shalt Not Kill'?" But her blood was up, and she blurted out, "Oh no! That just covers how we Jews treat each other! You gentiles are always fair game!"

Henry, I have no idea if it is possible today to document this but, at one time in the past, Canada was way ahead of the U.S. on the Kol Nidre oath.

Because someone in the government who was rightly concerned with justice understood what the oath allowed, Jews were not allowed to testify in Canada's courts - at least in some part of Canada.

I did a little looking and discovered that Elizabeth Dilling in her "The Plot Against Christianity," on page 60 of her 8.5 X 11 soft cover issue, writes that The Jewish Encyclopedia records that Europeans had used their knowledge of it "to bar the oath of a Jew."

Then too, on page 29 of Adrien Arcand's "The Key to the Mystery" he gives the complete Kol Nidre oath and adds that "Many judges refused to allow Jews to take a supplementary oath, basing their objections chiefly on this prayer." Arcand, of course, was a Canadian.

Many of your readers will recall the November 5, 1921 issue of [Henry Fordâ€™s weekly publication] The Dearborn Independent where â€œKol Nidreâ€ was discussed.