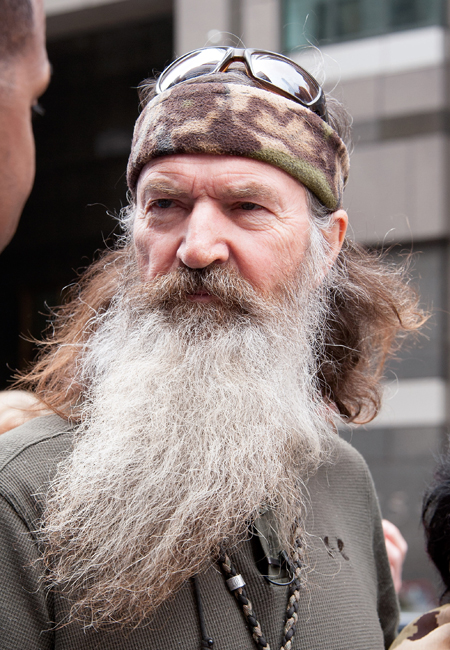 "Duck Dynasty" Patriarch Phil Robertson, left, is more than
a wealthy Louisiana duck call manufacturer. He is a Christian who
uses his wildly successful reality show to preach the Gospel.
When the Illuminati A&E network tried to ban him,
they got more than they bargained for.
Americans are no longer fooled. They know that "gay rights" are an Illuminati (Masonic) ruse to undermine gender and make homosexuality the norm. Satanists always try to stop people from discerning right and wrong (or sick and healthy) and speaking out.
Phil Robertson:
"It seems like, to me, a vagina--as a man--would be more desirable than a man's anus. That's just me. I'm just thinking: There's more there! She's got more to offer. I mean, come on, dudes! You know what I'm saying? But hey, sin: It's not logical, my man. It's just not logical."
"What is sinful? Start with homosexual behavior and just morph out from there. Bestiality, sleeping around with this woman and that woman and that woman and those men," he says. Then he paraphrases Corinthians: "Don't be deceived. Neither the adulterers, the idolaters, the male prostitutes, the homosexual offenders, the greedy, the drunkards, the slanderers, the swindlers--they won't inherit the kingdom of God. Don't deceive yourself. It's not right."
by Henry Makow Ph.D.
When these words in January's GQ magazine caused A&E network President Nancy Dubuc to suspend Phil Robertson "indefinitely" on Dec. 18, she touched off a firestorm.
She received death threats, a petition signed by 250,000 people demanding his reinstatement, and thousands of duck calls sent in as a protest. Former Alaska Gov. Sarah Palin complained that his free-speech rights were being trampled. Bobby Jindal, governor of Louisiana, complained that Miley Cyrus got a pass for twerking on TV while Phil got shown the door.
More important, his family co-stars said there would be no show without Robertson. Given that "Duck Dynasty" is the top-rated reality program on cable, with an average 14.6 million viewers, $80 million in advertising and $400 million dollar in merchandising, it is not surprising that A&E backed down Friday. Robertson would not be suspended. They had to eat these PC words: 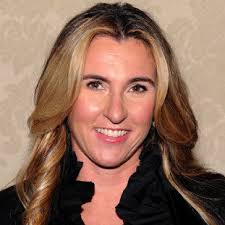 A&E's heterophobic President Nancy Dubuc (left) said the network decided to drop Robertson from the show because its core values are "centered around creativity, inclusion and mutual respect." A&E also said the network considered itself "champions of the L.G.B.T. community." It would be "disrespectful" to make their gay employees work with such a man. (A&E is jointly owned by Disney and the Hearst Corporation.)
It's remarkable how oblivious these executives are to what makes their own shows click, that they thought the show could continue without Robertson.
Friday A&E seized on some conciliatory words from Robertson to back down. To save face, it said it intended to launch a national public service campaign "promoting unity, tolerance and acceptance among all people."
In this case at least, "tolerance and acceptance" goes both ways.
Governor Jindal said, "I am glad to hear that the folks at A&E came to their senses and recognized that tolerance of religious views is more important than political correctness.  Today is a good day for the freedoms of speech and religious liberty."
I don't watch this show but it has struck a chord with the oppressed majority of white heterosexual Americans. It portrays a colorful, successful and happy family living a life grounded in Christian belief. They will not compromise on their faith, family loyalty and duck season, and they mean it. 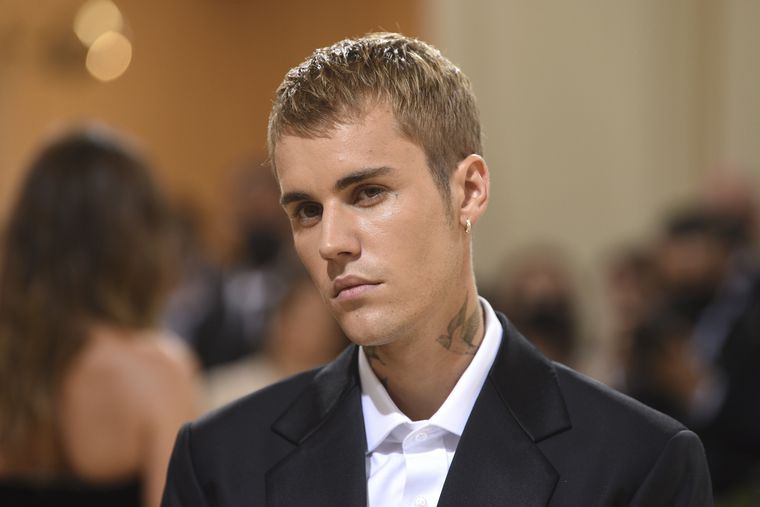 true, NDAA was up and they are a tv "program", but the worst I can say about them having looked for dirt is they don't seem to know the half of what is going on, with tv, how the system is run, etc... but I did find a vid of Phil actually talking about the spiritual warfare going on....

Phil quacks like a truly Christ-centered duck hunter, imo... thought you might also enjoy: this speech he gave recently was eloquent and needed:

You actually wrote â€œMost Christians and straights are prepared to live and let live. I certainly am. â€œ end of your quote. Then you are deceived and lost. I pity you.

Sure, when you expose the not illumined ones it can be helpful, but your opinions about God and The Bible and above all Christ is a far cry from the â€œWordâ€ found in The Bible. Apparently, you have no idea how much harm you have caused to Christâ€™s true Message and lead others to do the same.

I see now it was your liberalism and quest for provocative discussion that had you post some of my articles and comments. Your liberalism and love of your work above Godâ€™s Work misleads. I am prepared to fight against your lying as Father in Heaven Wills.

The Gospel according to John (Christ Jesus speaking):-

8:9 I am one that bear witness of myself, and the Father that sent me beareth witness of me.
8:10 Then said they unto him, Where is thy Father? Jesus answered, Ye neither know me, nor my Father: if ye had known my Father, ye should have known me also.
8:12 Then said Jesus again unto them, I go my way, and ye shall seek me, and shall die in your sins: where I go, ye cannot come.

I regard homosexuality as a developmental disorder. There are many very talented and good homosexuals who suffer from it. I disapprove and condemn gays who indulge in excesses, exploit youths or promote their disorder to straights. I think straights should be able to express their revulsion with homosexual sex without being accused of hate, just as gays may express the disgust with hetero-sex.

Ultimately we are all sinners. If spent my time hating sinners, I would hate myself, you and everyone else. Especially you for your arrogance.

"He that is without sin among you, let him first cast a stone at her." John 8:7

The concept of 'reality show' takes the suspension of disbelieve beyond the usual parameters of conventional 'sitcoms' and dramas where the audience is told it's fiction and the actors are acting. With these reality shows, the off-stage actions of the 'real people' on the show are also part of the script. But the viewers aren't explicitly told that.

It's like the tabloid covered in the checkout line at the grocery stores. The never ending soap operas presented as if that's the real personal lives of celebrities is PURE BULL.

Phil Robertson actually developed a better duck call in 1972 that helped him become a self-made millionaire. He really is still married to the mother of his children since 1964. He and his wife both graduated college. They really are members of the fundamentalist Church of Christ so there's a 90% or greater chance that he believes what he says. The genius of 'reality shows' is they will 'type cast' characters that manifest stereotypes. I've tried to explain to people I know who are enthralled with this show, that Media would first make them famous and build them up - only to destroy their image in the end. This is what this Robertson 'scandal' has been about. The GQ interview offer was a trap. They knew what Robertson would say and steered him to open up. Once they had the sound bytes they needed, they sprung the trap and made a PC "poster boy" out of him.

Part this stunt has been Market Research. I've seen polls all over the internet "SHOULD DUCK DYNASTY BE CANCELLED?" etc. They've just been testing the waters, to see how many people would squawk.

I fail to see any Christian values in pretending to be humble hillbillies by growing beards and long hair to fool people into thinking that is how you actually are. It's false pretense.

Let's talk about how Phil chose Godless, atheist China to make his duck calls instead of making them in the good old USA. That is putting profits above all, hardly Christ like.

This whole controversy was manufactured to just in time for Christmas, to maximize sales of Duck Dynasty merchandise, so mindless zombies could show their "support" by throwing money at junk made in China.

I love the site, and think you are doing God work, but Duck Dynasty has no Christian values....they just like to pretend they do.

Thanks for acknowledging the whole Duck Dynasty tribulation.

I never watched the show, either, nor anything else on basic cable in the last few years.

Every channel is the same: the same messages, themes, morality degeneration normalizing etc.

For a while it was plastic surgery, then teenage pregnancy, and freaks and the paranormal last I checked.

An article I read about the show said that the whole thing started as a freak redneck reality show, but it backfired when it became evident that they weren't morons and their Christianity struck a chord and people actually LIKED THEM and wanted them in their living rooms all over the country.

This must be an Jewish illuminati conundrum: there are millions of God fearing people who would like to watch TV again, which would mean millions in advertising, but it would also mean giving them something they would like, which makes their rancid skin crawl. What a dilemma!

Dear Henry - the whole debacle was a set up that back-fired in the network's face.

A source close to the family, who asked not to be named, told MailOnline: â€˜You have to ask yourself, why this interview happened and why it ever became public. Someone from A&E was there and was aware of the kind of answers Phil was giving.
â€˜But despite that, they didnâ€™t ever try to stop it or control it. Instead, they let it hit the headlines and then released a statement condemning it.
â€˜It is our belief that they knew what was going to happen and then used the situation to exercise control over Phil.
â€˜It is our understanding that when the TV executives came up with the concept for the show they wanted it to be a case of people laughing at a bunch of backward rednecks.
â€˜But when it didnâ€™t turn out like that and people actually started identifying with the way the family behaved and were laughing with them, not at them, they became uncomfortable. It did not sit will with the New York TV types.

The man said nothing wrong, entirely biblical, though I would have chosen a more delicate way to say it...but I do admire the matter-of-fact truth.

Love, love, love the death of the elephant in the room.

Are you sure He defeated the Satanists... or as the saying goes... if it sounds like a duck....!

It would not surprise me one bit if all of this to due about nothing was just another ploy by the owners of A&E to garner even more interest .Just a little twerk here and a little twerk there. Publicity stunt just like Jeff Bezos and his Amazon.com delivery drones.