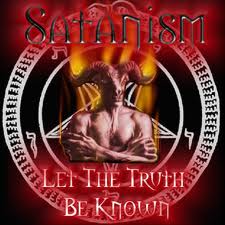 'TRUE Satanism is all about progress, its about finding the truth

behind everything and it does not matter if you believe in Satan or not,

it's the action that counts."

I have read your article about Satanism and i have to say that, being a Satanist myself, the people described are not even Satanists. They are people with no morals and no self respect and the crimes which they commit should be punishable by death.

TRUE Satanism is not about blood sacrifices or child abuse or anything along those lines. What I'm about to say next might surprise you as all everyone knows is the bad guys who claim to be Satanists to justify their perversion. Those kind of fakes have made life very difficult for us.

TRUE Satanism is all about progress, its about finding the truth behind everything and it does not matter if you believe in Satan or not, it's the action that count.

The part in the article which said that [sacrificing] a thousand human souls will please Satan is false. Satan's goals are not keeping people as slaves or dis-obeying Gods orders. If both religions are observed and we take the Bible into consideration, both goal are a lot alike. They both talk about freeing people and equality. I have read the Bible and I have also seen the Old Testament although there are some negative points about that like women are inferior to men.

There is no such thing as that in Satanism. As Christianity has seven sins, Satanism has nine sins and they are as follows:

I hope this was useful too you in finding about a little about ACTUAL Satanic culture and i hope you do not take offense by this mail.

Your article does nothing but further decrease our reputation and give people false ideas and notion about ACTUAL Satanism and culture.

I will do my best to change your perspective about Satanism. Do not get me wrong. Child molesters and such other acts should be punished and no REAL Satanist would ever do such a thing.

Bikers and gang members are not Satanists and neither is Barrack Obama. Atheists are termed as LeVayan Satanist and they are not real Satanists. They follow the teachings of Satan but do not perceive him as a Deity. Spiritual Satanism is actually believing that Satan is real.

I asked Regulas for his credentials as a Satanist:

I can't give you that as we are not allowed to, we will not come out until the people have forgotten the old notion about Satanist. However, if you do want to do some research about the topic, stay away from joyofsatan and angelfire. Those sites are false; none of us hate Jews. We don't have leaders in our church as Satan teaches us that we are all equal and that you should never follow one but make our own choices. On YouTube you will see some videos about people saying that they grew up in a Satanist home and they were abused sexually. Their parents were not real Satanists. I'm sorry if this mail was not much help but it is all i can do without letting people know who i am.

This guy is exactly like the lower level freemasons (also satanists) who do the good deeds for the public eye to see in order to cover for their evil leaders and attract more people in the lower orders.

It is a rule of black magic that 90% of those practicing it started off doing white magic and then incrementally work their way up to the truly evil stuff. It is a very rare breed that starts off with evil intentionsin mind but it is very common for the fool such as regulas to be slowly perverted into the evil stuff.

Regulas, just like lower level freemasons is a fool of the highest order. THis type of low level satanism caters to the ego in the same way that freemasonry does and its not hard to see how the typeof person to whom this stuff appeals can eventually get into things like pedophilia and human sacrifice.

Regulas has no idea what he is involved in. The modus operandi for Satanists is to come up with positive pretexts and platitudes to mask their evil deeds and goals. That's why the devil is characterized as a deceiver. Tragic human suffering throughout history and our state of terminal arrested development are because we in the clutches of an age-old satanic conspiracy.  Do not look at what Satanists say. Do not be distracted by their occult hocus pocus. Look at their fruits. Look at the world today. Satanism is quite simply about turning reality upside down so that evil is good, sick is healthy, lies are true and ugliness is beautiful and vice-versa. Look at the world today and tell me this has not happened.  Take war for example. Hell and insanity portrayed as ¨patriotism,¨¨¨heroism¨ and ¨defending freedom.¨ Wars are all against humanity and are designed to consolidate Illuminati wealth and power.

Comments for "What is Satanism?"

I just wanted to say that if I'm not mistaken, in Hebrew "ha satan" means "the adversary". He has set himself up in opposition to everything God does and that comes under the guise of good as well as evil. If he's not portraying himself with horns, tail and a pitchfork, he comes as an angel of light:

"And no marvel; for Satan himself is transformed into an angel of light. Therefore it is no great thing if his ministers also be transformed as the ministers of righteousness; whose end shall be according to their works". (II Corinthians 11:14 & 15).

And then, of course, there's his other recourse. As the famous line in the movie "Usual Suspects" goes: "The greatest trick the devil ever pulled was convincing the world he didn't exist". He is the great deceiver. He has something for everyone which includes those who believe he exists as well as those who don't.

I just wanted to say that if I'm not mistaken, in Hebrew "ha satan" means "the adversary". He has set himself up in opposition to everything God does and that comes under the guise of good as well as evil. If he's not portraying himself with horns, tail and a pitchfork, he comes as an angel of light:

"And no marvel; for Satan himself is transformed into an angel of light. Therefore it is no great thing if his ministers also be transformed as the ministers of righteousness; whose end shall be according to their works". (II Corinthians 11:14 & 15).

And then, of course, there's his other recourse. As the famous line in the movie "Usual Suspects" goes: "The greatest trick the devil ever pulled was convincing the world he didn't exist". He is the great deceiver. He has something for everyone which includes those who believe he exists as well as those who don't.

Secularism, Dawkins , Rand, etc leads to Satanism via the Cain principle of putting 'success' "I shall prevail" above all else. Satanism is simply 'the lower chakras' separated from the higher chakras, to use those terms. The German word for 'ego', the one Freud used, is 'Ehrgeitz', or 'honour goat'. Secularism and Satanism rest in the 'ego', hence Crowley's 'The Law'. Sex rests in the ego. 'Animal sacrifice' seeks to bolster the animal ego....

I have never believed in this satanism BS, simply because there IS no Satan. Satan is just an excuse for evildoers to hang their evil deeds on, when in truth these come from their own innermost selves. And that always grows out of selfishness and not dealing fairly and decently with others.

Not to say that there is no "satanism" that was developed by rebels to goodness and decency in order to formalize their evil.

But in fact that is just a fairy tale as in Little Red Riding Hood where the wolf is the bad guy, or Sleeping Beauty where the stepmother queen is the bad one.

Like children, "satanists" also need their fairy tale character to help them imagine a persona to focus their mind on. Satanism is just laughable kidstuff for bad guys, but as long as they hang on to their imaginary structure, of course the evil will go on.

This guy is playing the old and very tired game of the "white witch" verses the "black witch". Your readers who have studied the occult
will instantly understand this.

A witch is a witch and the white and the black serve the same master.

The definition of confusion is this: Truth mixed with error. The purpose of the way this guy talks and the things he says is to influence weak- minded people, and unfortunately we have no shortage of those kind of individuals.

Satan came to kill, steal, and destroy. Satan has his workers in the pulpit, in congress, in Hollywood, in the white house, in the choir, taking the offerings, in the banks, in the pentagon, in the Vatican,and in the news media...to name only a few. Any and every tool he can use to deceive mankind is in use as I write this.

Wisdom demands that we associate with and subscribe to the person or the thing
that is noble, virtuous, and true, who is not duplicitous. That person is Jesus Christ.

I read your article sent to you by Regulas. Sadly this person is deceived and very mistaken. He has fallen for the deceit and trickery of Satan.

Either he is a lower level satanist who is not in the "know' or he's truly naive. He is very polite and his tone would make people believe Satanists are good people. While I am not implying that satanists are all bad people going around doing evil. However, They are working with Satan to destroy humanity and God's plan for us whether they know it or not. He said he cannot give you his credentials because he is not allowed. Anything in secret is against the good and pureness of humanity. We should all pray for people like him.

You are of your father the devil, and your will is to do your father's desires. He was a murderer from the beginning, and has nothing to do with the truth, because there is no truth in him. When he lies, he speaks out of his own character, for he is a liar and the father of lies.

On that day when, according to my gospel, God judges the secrets of men by Christ Jesus.

Keep up the great work