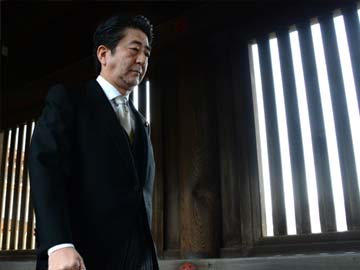 A defense of Shinzo Abe's visit to the Yasukuni Shrine (left)
When Americans are blind to their own leaders' war crimes, it's typical of the Illuminati media to fixate on Japan's. Perhaps it's time to dismantle misrepresentations of World War II Japan.
In WW2, Japan was not targeted because she wanted to "conquer the world," but because her military stood in the way of Communism, and her nationalism in the way of world government.
by James Perloff
(henrymakow.com)
Japanese Prime Minister Shinzo Abe's 30-minute visit to the Yasukuni Shrine, which honors Japan's war dead, Dec. 26  sparked widespread denunciations, including an admonition from the U.S. embassy in Tokyo. The visit, it was alleged, means Japan is reviving "militarism," especially since, among the millions of souls the shrine honors, are those of a handful of "war criminals" like Hideki Tojo, Japan's prime minister during much of World War II.
Perhaps it is time to dismantle misrepresentations of World War II Japan.
• As documented here, President Franklin D. Roosevelt not only provoked Japan to war through economic strangulation, but had full foreknowledge of the Pearl Harbor attack via decoded intercepts and personal warnings - information he denied to our military commanders in Hawaii, whom he thereafter scapegoated for the attack.
• To get a feel for how Americans were being propagandized, watch on YouTube Our Enemy: the Japanese,  in which narrator Joseph Grew (CFR) told the public the Japanese believe it is the "the right and duty of Japan's emperors to rule the whole world ... to destroy all peoples and nations which stand in the way of its fulfillment .... Their actual dream is to see Tokyo established as the capital of the world ...world conquest is their national obsession."  Grew forgot to mention that Japan was a closed ISOLATIONIST country until Commodore Perry compelled them to sign a trade agreement under threat of naval bombardment.
• World War II depictions of Japan condemned "fascist aggression" while tolerating COMMUNIST aggression.  For example, when the Germans invaded Poland in September 1939, Britain and France declared war on Germany.  Yet when the Soviet Union invaded Poland that same month, the West ... yawned.  Indeed, when the war ended in 1945, Poland - whose national sovereignty was the alleged issue over which the horrific war began - lost her sovereignty anyway, to a Stalinist regime held in power by Soviet tanks, but the Allies' media looked away.
• Asia was a parallel.  The Japanese invasion of Manchuria in the 1930's was part of the "Japanese plot to conquer the world," but the fact that the Soviets had FIRST seized Outer Mongolia and China's northwestern province of Sinkiang drew no notice.  As Dr. Anthony Kubek wrote in HOW THE FAR EAST WAS LOST:
"It was apparent to Japanese statesmen that unless bastions of defense were built in Manchuria and Inner Mongolia, Communism would spread through all of North China and seriously threaten the security of Japan.... But the Department of State seemed not to regard Japan as a bulwark against Soviet expansion in North China. As a matter of fact, not one word of protest was sent by the Department of State to the Soviet Union, despite her absorption of Sinkiang and Outer Mongolia, while at the same time Japan was censured for stationing troops in China." 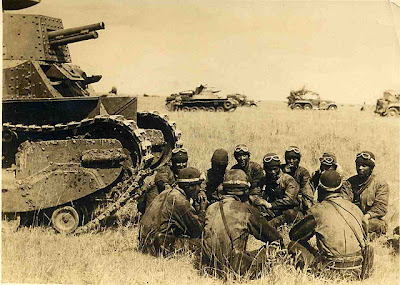 Left: Japanese tank crew rests during 1939 fighting against the Soviets near Mongolia
• To those who might contend Japan had no right to enter China to oppose Communism, let's remember that the United States sent its troops to Vietnam on the same principle. By what logic, then, could Japan not oppose Communism on its doorstep?  Communism had methodically enslaved all the nations in the Soviet Union, and was now boring southward into China.  In sending troops to Manchuria, Japan was merely invoking her own version of the Monroe Doctrine.
• Although Chiang Kai-shek - heir apparent to Sun Yat-sen in a quest for a unified Chinese republic - received U.S. support during the war against Japan, this support vanished as soon as Japan surrendered, and the CFR-dominated State Department, via numerous intrigues, backed Mao Tse-tung and the Communist Party, which murdered millions after assuming power in 1949.   See this author's article China Betrayed.
• North Korea also became Communist as a result of CFR diplomacy.  In 1944, Foreign Affairs - flagship journal of the Council on Foreign Relations - proposed placing Korea under a trusteeship including Russia.  Stalin maintained a nonaggression pact with Japan during the war, but at the "Big Three" conferences at Teheran and Yalta, President Roosevelt asked Stalin if he would break the pact and enter the Pacific war.

Stalin agreed - on condition that America supply him with all the materiel his Far Eastern army would need for the expedition. Roosevelt agreed, and some 600 shiploads of Lend-Lease were sent to Russia for the purpose of fighting Japan.  Stalin did not send his army into the Far East until five days before the war ended; Japan, already struck by the atomic bomb, was ready to surrender.  As a reward for being "co-victor" of the Pacific War he did nothing to win, Stalin was ceded control of North Korea - resulting in one of the most brutal dictatorships in history, and the Korean War during which over 50,000 GIs and over one million Koreans died. 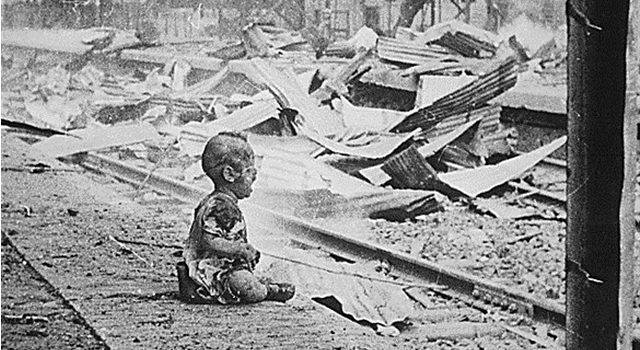 • Staged atrocity photos such as the "Shanghai baby" were used to inflame U.S. public opinion against Japan.
For an alternative view of the "Nanking Massacre," used to further outrage Americans, I suggest readers consult this article by Japanese Christian pastor Arimasa Kubo.  It is absolutely NOT my intention to deny that atrocities occurred under Japanese occupation, but rather to balance the partisan propaganda that still dominates American mentality after seven decades.  When I was a teenager in the 1960s, I watched a screening of The Seven Samurai.  I was shocked by the film's sensitivity, because I had been raised on World War II flicks that stereotyped all Japanese as inhuman monsters.
• Lest anyone think me alone among American authors in this reassessment of wartime Japan, consult the writings of Kubek (aforementioned), George Bronson Rea (THE CASE FOR MANCHUKUO), and Ralph Townsend (numerous works).  We dropped atomic bombs on the Japanese even after they sued for peace on unconditional terms (save one - to retain their emperor, a condition we accepted anyway). Where does that go on the scale of war crimes?  Japan was not targeted because she wanted to "conquer the world," but because her military stood in the way of Communism, and her nationalism in the way of world government.
Shinzo Abe is to be commended for courageously upholding his country's traditions at a time when the globalist elite want nationalism eradicated, to make way for world government and the satanic tyranny it would inevitably inflict.

---------------
***James Perloff has authored several books, including Truth Is a Lonely Warrior,  published in both Kindle and paperbound editions.   It discusses many suppressed stories of American and world history.***
First Comment from Ken Adachi-
What a brilliant article. James Perloff deserves riotous kudos for illuminating a Japanese  defensive policy that would never occur to Americans:  that Japan's incursion into China was more than just empire building, but also a containment strategy against spreading communism.
While the bombing, murder, and raping of untold scores of innocent Chinese civilians in the 1930s by the Japanese military is utterly indefensible, the idea that the Japanese people themselves are barbaric, inhumane, cruel, and sneaky is a Hollywood-created propaganda fiction. Japanese people as a whole have very  high standards of personal morality, honor, honesty, and human compassion. Westerners don't know this until they actually live in Japan and come to realize just how honest, decent, and compassionate the vast majority of Japanese people are.
Japanese civilians were kept totally in the dark about what the Japanese military was doing in their name in 1930s China and in the Pacific; just as American civilians were kept in the dark about the unjust, horrific atrocities that American troops were committing against innocent civilians in Iraq and Afghanistan following the false flag of 9/11. The common denominator is the dark shadow of militarism.
From Mark:
Something very little known about Japan. My cousin was a Polish diplomat in Japan before WWII and he told me many interesting facts. During WWII, Polish Senior Intelligence Officer, stationed in Berlin and wearing an uniform of high ranking German Army Officer(!) was contacted by Polish Government in Exile (in London England) about Japanese diplomat in Berlin, who wants to talk to him in a greatest secrecy. They arranged a meeting and Japanese diplomat explained to him, that should Hitler win war with Russia, Emperor is preparing Japan for the final war with Germany. In case of such turn of events Japanese government wanted to make sure that Poland will be on a side of Japan. Hitler had to keep in Poland close to million soldiers and civil servants to oppose the whole nation, but most of all 200,000 armed soldiers of an underground Polish Home Army (AK). My Mother was one of them, she survived, but had to hide for two years when Soviets came in 1994.
Japanese were very respectful to Polish Intelligence operations which orchestrated defeat of Soviet invasion of Poland in 1920, and deciphered ENIGMA coding machines before WWII, which with a help of Polish pilots, saved GB. Polish Intelligence was not only intercepting Soviet and German military communication, but originating their own under the false flag to send Stalin's army to Hungary and Budionny's cavalry into the... swamps in 1920. Polish troops took 200,000 Soviet Prisoners of War, and they did not want to go back to their „Communist Paradise"
To prove good will of Japan, their intelligence was supplying to Polish Government in Exile many secret informations, very useful until the end of war.

Regarding the article: Demonizing WW2 Japan is Hypocritical, or any piece written pertaining to WW2. These essays must always include the important information that the American devils, you know the vermin involved, were part of the group of agitators, financiers, and suppliers of goods used in war by the Germans, of WW2. This truth changes the entire scope and position of the corporate U.S. role in the mass murder of humans at that time!

Japanese culture was ruined by the West within one hundred years. The Japanese had done everything right to preserve their culture from contamination and exploitation. European visitors were treated politely, and those who persisted in schemes to intrude upon Japan's autarchy were politely executed.
19th century American 'gunboat diplomacy' opened Japan to Western 'free trade' in 1854.

The postmodern 'culture' of Japan is a pathetic as what's become of America and Europe. Unlike the West which has had hundreds of writers critique and lament the 'decline of the West', one seldom hears of Japanese literature mentioning what happened to THEIR traditional social fabric - which was really the same rape as happened to postwar Germany and 1960's America. Thanks to Henry I read a piece by the Ohta Ryu, who wrote "The End of Japanese Women".

"The U.S Allied Forces over two hundred thousand Japanese women by force in the form of rape (discarded), as mistresses (so called "Only's" i.e. only temporary ), or by marriage ( a la Madame "Butterfly" or some were taken back to the States but from the data available most of the marriages did not have a happy ending) and their lives terminated like flowering branches cut-off before their prime."
Post WWII, Japan under Occupation was rigorously censored and any criticism, even indirect and subtle ones were forbidden and erased out. (So much for equality and democracy!)
Hence the rape of Japanese women by the Allies was completely unknown except to the perpetrators themselves. With the passage of time, it has almost completely been erased out people's memories and never even made it to much "documentation."

The End of Japanese Women
http://www.naseeb.com/journals/the-end-of-japanese-women-1993-byohtaryu-81342