"Assault on Wall Street" is the most
revolutionary North American movie ever made. ThatÂ´s why Hollywood Lefties want to bury it.
The fear of a real Jim Baxford, a self-described "soldier of the people," is turning America into a police state.
By Henry Makow Ph.D.
As the trailer indicates, "Assault on Wall Street" shows how the credit crisis of 2008 destroyed the life of an average American working man, Jim Baxford, an armored truck guard,played by Dominic Purcell . 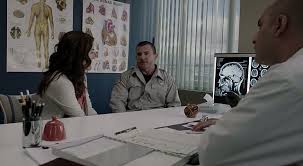 Baxford's life savings, invested in mortgages, disappear. His wife who is getting expensive therapy for a tumor, kills herself and his home is foreclosed.  The average American is credibly depicted as being screwed by the medical, financial and legal systems, and by government itself.  A background chorus of TV commentary documents how the criminal elite got richer while the masses were robbed. No one served time for the worst calamity since the Great Depression, just as no one has served time for allowing 9-11 to happen.
Instead of griping on the Internet, Baxford, an army veteran, researches the culprits and starts killing them. The movie ends in a rampage where he murders nearly everyone at his brokerage.
The movie was written and directed by Uwe Boll, 48, a German who has made a string of violent, mostly unsuccessful horror movies. He could do this because of German tax write-offs.  A lot of people think he is incompetent. A petition asking him to stop making films garnered about 300,000 signatures. He challenged some critics to a boxing match and there is a YouTube of him beating the crap out of one.
Ewe Boll is no lightweight. He has a Ph.D. in literature which admittedly is no guarantee of anything. But except for a few clunky notes, the movie is well made, credible and gripping. 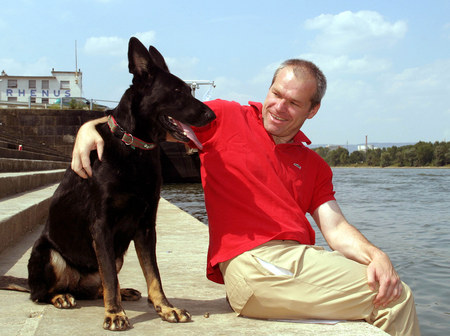 In an interview, Boll described its genesis:
"Look at movies like Wall Street: Money Never Sleeps and Margin Call, ... and you almost feel sorry for the brokers. ...For me, I want to represent the people that aren't rich. They suffer. Commonly, for most of the people, they didn't recover. Even when the stock market went up, only 12% of the people came out of this okay. This is a movie for them. It's a revenge fantasy of course. I don't want, for real, to see the bankers getting shot. But I want the bankers to maybe get scared. I want them to think, "Maybe we shouldn't be overdoing this." Because we present the risk of someone always going after them. Right?
"A lot of Hollywood actors are very connected to that whole studio world. They are into the stock market. They cause suffering. Let's face it, with a movie like Argo? It's a great movie. But it doesn't help anybody. Its great for the CIA. It's a very conformist movie. Where there is nothing political, and there is no courage to do Argo, zero.
"Courage comes when you do something against the system. Something you can use to wake people up. You can use it to hurt the people with power. I think this was my plan, That some people get hurt. Fuck it! Maybe they'll get shot now. (Laughs) If the bankers feel really uncomfortable when the movie is out, they feel maybe someone will do this now, and they need even more bodyguards. I would say, Yeah. You need more bodyguards. Or, you need to change your behavior."
"You shouldn't be taking million dollar salaries while other people are starving to death. You know? Its ridiculous. Its like (actor) John Heard said in the end. The capitalism...The cream always swims to the top. But, is this  what we want? I don't know. I don't. I think, in a good world, we all can live. Now, we are running in a situation where increasingly people can't afford to live ..."
BECOMING A CULT CLASSIC 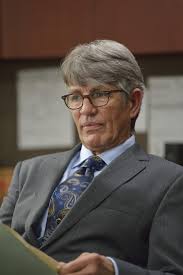 (left, Eric Roberts plays his sleazy lawyer)
This courageous movie was made by two Vancouver-based companies: Lynn Peak Productions, Inc. and Brightlight Pictures. Producers: Dan Clarke/Shawn Williamson. It was shot in April 2012 and released in May 2013.
It played briefly in a single Los Angeles theatre and received a handful of reviews, all of them disparaging. "Shamelessly subpar," declared The Los Angeles Times. "'Assault' plays like visually bland vigilante porn," sneered Variety.
Nevertheless, it is becoming a cult classic like John CarpenterÂ´s "They". The trailer got over 1.7 million views and raves from ordinary folk. "1. Great movie, Going to watch again.ï»¿ 2. I just watched the best movie I have ever seen in a long timeï»¿. 3. Film-BOMB! ...Just about our life ..Unvarnished..!ï»¿ (and inevitably)... 4.  someone should re-enact this movie irl"
Ewe Bolle's first name is pronounced "Ooo-vey" but it could be pronounced "Oy vey" as far the bankers are concerned. Films today are strictly about social control: diversion, disinformation (like Argo) and social engineering (i.e. promiscuity and porn.)  Why have there been no hard hitting America movies about the credit crash and what is really happening in America today? Yes, there have been some fine documentaries but they are not widely seen. Film-art is supposed to be a reflection of reality. It takes an outsider like Uwe Boll to demonstrate this. 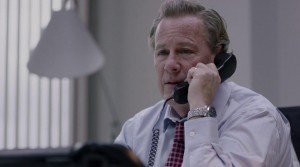 (left, bankster Jeremy Stancroft, played by John Heard)
Why haven't the so-called socialists and progressives, the George Soros types in Hollywood, embraced this movie? Because it is truly revolutionary and subversive not the phony "change" they peddle.  Socialism etc. has nothing to do with revolution. It is a ruse to expand government control over the individual. It is part of the left-right control dialectic. You can add Hollywood to the list of people screwing the ordinary man. The fear of a real Jim Baxford, a self-described "soldier of the people," is turning America into a police state.
I do have some reservations about Baxford. He is essentially a sucker. He believed his broker. He believed his doctor and insurer. He believed his sleazy lawyer. He believed his political leaders. Yet he doesn't acknowledge his responsibility.
My other reservation is that he cold-bloodedly murdered people who were not directly responsible for his dilemma. At one point, he shoots people standing in windows in the opposite office tower. He doesn't know who they are.
Finally, the banker tells Jim: "It's the bankers and the owners and the advisers who get rich. And it's the little people who buy their stock that always lose in the end, people like you. That's capitalism."

Tell that to all the people whose stocks were up an average of over 30% in 2013.  You'll never see a revolution with returns like that. But if the market and economy crash again...
Related:
Americans on Wrong Side of Income Gap Run Out of Means to Cope
Makow - Inside Job- The US is a Kleptocracy
Makow- Why Haven't Big Bankers Gone to Jail

"We live in a lawless society. A society needs law to stop it from breaking down. So what's the solution ? Send these attorneys back to the City Of London and start making or getting lawyers. That would fix everything.

Its law that is the glue that holds a free society together and ours is falling apart because we don't have it."

On the contrary we do not need more lawyers, politicians, judges, bankers, freemasons, social activists and revolutionaries, criminals and perverts.

We need fewer of them and preferably none.

What we need is good people leading society and no laws but the law of God and the gospels. Going beyond that has brought the world to ruin.

Contrast this movie to the "Wolf of wall Street". I have read the book, it is a tale of debauchery, theft, drugs and dishonesty.

Basically, the Wolf is a scam artist who fleeced with impunity hundreds of trusting victims with an investment scheme, while treating his employees like dogs and snorting cocaine all the time. However, they were able to produce a huge blockbuster movie with Hollywood star DeCaprio, painting him in a positive tone.

The movie was shown in a theater to Wall Street people and they applauded and cheered the protagonist several times during the exhibition.

I believe that you are wrong about calkling him a sucker. Most people in this society are inherently good, we have been taken advantage of. We live in this wonderful organic society. Need your transmission fixed ? You can usually trust your transmission repair man. Its probably too much to ask a dentist to fix his own transmission. He doesn't have the tools. You work late, you stop for a pizza. Will the pizza be poisoned ? No. People are inherently trusting because they believe others to be like themselves - but we still need law - we need it for when communication breaks down, the primary cause of conflict (Locke).

But what happens when you need the law ? It isn't there. These socialists have destroyed the law. It comes in the form of jack booted thugs who will probably laugh at you if you report a crime. Of course you can hire an attorney. Pay him 500 bucks an hour and wait ten years. If its an insurance company you are after they will drag it on until you are dead. Got a problem with that? - call the law society. Of course it sounds like they will look after you but really they will just look after their attorneys.

We live in a lawless society. A society needs law to stop it from breaking down. So whats the solution ? Send these attorneys back to the City Of London and start making or getting lawyers. That would fix everything.

Its law that is the glue that holds a free society together and ours is falling apart because we don't have it.

In true capitalism the cream does rise to the top. Hard work and innovation are rewarded in true capitalism. True, people get rich and some of them turn out to be heartless bastards, but they can be dealt with using our pocketbook and purchasing choices. But how do you punish the robber baron with political pull who has his competition legislated out of business?

Obviously in socialism, thieving psychopaths rise to the top using government, and laws passed in their favor to enrich themselves or their business quickly and without effort. Capitalism= working for your bread, Socialism= stealing it from others. This holds true regardless of your station in life. The capitalist spirit is being destroyed, small business with no political pull is being regulated out of existence in favor of corporate solutions.

Laws against natural food, milk, preference for LGBT being shoved down our throats, Handicap access requirements, kicking smokers out of bars, you name it. When the big dogs invest their money, they don't look for companies with hard working, innovative management. They look for the companies that curry government favor, get tax breaks, government contracts, the lazy ones who take the shortcuts. I have not seen this film, but I am tired of the question being asked in many films and commentary asking: Is capitalism to blame? NO! Laziness is to blame, from the bottom to the top.

On a side note, there is a company whose owner shut down a major pipeline project in the USA, simply by having two closed door meetings with Obama. As a result, his company hauls most of the oil from the Bakken by rail. He is hailed as a great capitalist. Is he?