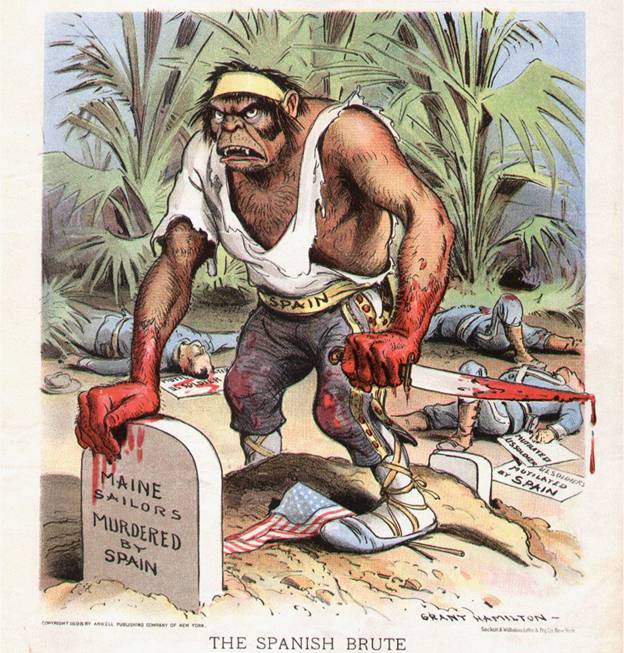 Left. The "Hun" was Spanish. In this 1898 magazine cover, Spain is depicted as the Maine's apelike murderer. Note the foot trampling the Stars and Stripes.
The present looks exactly like the past. The Spanish American war is
more proof that war is an Illuminati invention. They start all wars for power and profit.  People who fight in these wars are dupes.
By James Perloff
(henrymakow.com)
The Spanish-American War of 1898 bore remarkable parallels to today's realpolitik.
â€¢ As Ferdinand Lundberg documented in America's Sixty Families, President William McKinley was ruled by Wall Street, especially the Rockefellers' National City Bank. McKinley had gone bankrupt while governor of Ohio, and was bailed out by a syndicate headed by Rockefeller front man Mark Hanna, who became McKinley's political manager and White House boss. Said Chicago's Chronicle (April 14, 1898): "The Rothschilds and the Morgans control the White House."
â€¢ Like today, Americans were growing disgusted with the corrupt Democratic and Republican parties, and the nominal distinctions between them. The Populist Party was formed in 1891 out of grass-roots opposition to Wall Street's political domination. The Rockefeller-Morgan-Rothschild axis decided to distract Americans with a new "enemy": Spain.
â€¢ The choice was not coincidental. Spain ruled Cuba, which by the 19th century had become the world's richest colony and largest sugar producer. National City Bank coveted Cuba's "white gold" as a complement to Standard Oil's "black gold."
â€¢ The Yellow Press, led by William Randolph Hearst and Joseph Pulitzer, began inundating Americans with fabricated tales of Spanish oppression: Spaniards feeding Cubans to sharks, roasting Cuban priests, slaughtering hospital patients where no hospital even existed.
â€¢ The decision to send the battleship Maine to Havana was made at a secret White House meeting of which no minutes were kept. Unknown to the ship's captain, Charles Sigsbee, neither the Spanish nor even the American consulate had been forewarned - but no shooting erupted, and the Spanish permitted her to dock.

(Early false flag, the sunken Maine)
â€¢ Hearst paid bribes to have the correspondence of Spanish ambassador Enrique Dupey de LÃ´me spied on. In violation of diplomatic immunity, a letter critical of McKinley was stolen and reprinted in The New York Journal under the headline "THE WORST INSULT TO THE UNITED STATES IN ITS HISTORY." Two days later - with anti-Spanish sentiments at peak - the Maine exploded in Havana harbor, killing 266 crew members.
â€¢ When the Maine sunk, the assistant secretary of the Navy was Teddy Roosevelt. After the war he became Governor of New York, and by 1901 was President of the United States. When the Lusitania sunk, the assistant secretary of the Navy was his cousin Franklin D. Roosevelt - who likewise went on to become Governor of New York and then President.
â€¢ The official U.S. naval court of inquiry could not determine who was responsible for the explosion, but the Yellow Press left no room for doubt. America went to war with the battle cry "Remember the Maine!"
â€¢ The last thing Spain wanted was to provoke America into war. The Spanish knew their navy (still mostly wooden) could not compete with America's steel warships, and defending an island less than 100 miles from the U. S. coast was impossible. The Spanish caved in to all demands from the McKinley administration, including recalling Cuba's governor Valeriano Weyler, and offering to give Cuba semi-autonomy.
â€¢ In chilling hypocrisy, McKinley claimed he had "exhausted" all diplomatic efforts, and secured a Congressional resolution authorizing military intervention unless "Spain relinquish its authority and government in the island of Cuba" (translation: "hand your sugar industry over to the banksters").
â€¢ Spain elected to fight the hopeless war for one reason: all Spaniards considered Cuba part of Spain. To surrender it would have meant revolution at home. The Spanish chose war with honor over disgrace and revolution. 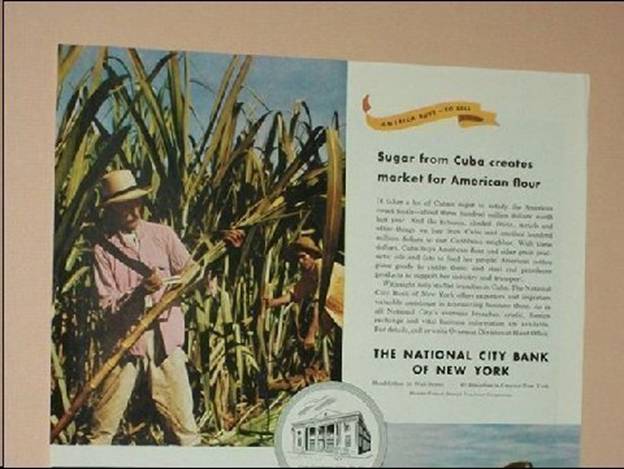 I would like to seize this opportunity to thank you so much for posting the articles written by James Perloff. Thanks to him I know now that the USSR struck first by gobbling up Mongolia and even parts of China, which in turn and only then provoked Japan to protect Asia from Communism by advancing beyond the Yalu River. One more scale off my eyes.

Another war-provoking incident that probably few people will be aware of was the "sinking" of the S.S. Sussex by a German U-boat in the English Channel in 1916. Denouncing the German attack, U.S. President Woodrow Wilson said American lives were lost when the ship was treacherously "sunk". Even today official U.S. government agencies repeat this story: Americans killed when the ship was "sunk".

Although seriously damaged, the ship was not sunk and actually sailed for years thereafter, and according to Wikipedia the report of American fatalities was untrue.

This article is well timed. Last week, in the tradition of 1890's Hearst "yellow journalism" rewrote the history Iraqi blowback against US occupation in Fallujah in 2004.

That was the advance job for Senator's Boehner and Levine's lame attempt to whip up a "REMEMBER FALLUJAH!" fervor.

Another well written and well documented article James and I thank you.

Yes, it's true that "world riches" and "world government" are inseparable. The man who owns the gold makes the rules. Wealth is independence and poverty is enslavement.

The Spanish American War was symbolic of America's future foreign wars to come.

These unprovoked, non-sanctioned by the public, created by "false flag terror" wars under the guise of freedom and self determination became our new foreign policy.

As far as McKinley goes, a Rockefeller banker stooge maybe, but a New World Order stooge, never. He was murdered for that very reason.