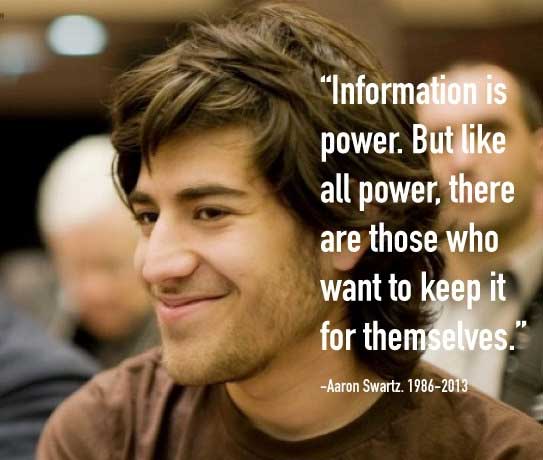 The Death of Aaron Swartz & the Information Age
Aaron Swartz's murder will prove in vain as long as it's ruled a suicide.
Suicides can't be martyrs, that's common sense.
By Richard Evans
(henrymakow.com)
"The world is divided into three kinds of people: A very small group that makes things happen; a somewhat larger group that watches things happen; and a great multitude that never knows what has happened."  -- Nicholas Murray Butler
Aaron was among the first small group. The people who make things happen.
Aaron Swartz was one of the very few prime movers in the field of internet information.  He'd just started high school when he co-authored "RSS" ("really simple syndication") feed format that everybody uses to be notified of information of interest to them.
When you see

give a moment of silence for Aaron Swartz.
Born in 1986, he grew up on the internet. His dad, Robert was a MIT Internet guru. " My main reaction was being excited about it.  Part of what made it magical was finding other people to connect with and the more people there were the more interesting pages there were to find. I mean, you would search for stuff and most of the time nothing would come back 'cause there were only a handful people writing stuff for the internet. I remember having to open the phone book and having to dial a place up and saying 'how late are you open'?  Then suddenly you just type in their domain name and it tells you everything you need to know".
Compare his way of thinking with the sleazy Mark Zuckerberg in 2010 when asked to explain why Facebook suddenly unlocked millions of members privacy settings without warning them.  "We decided that these would be the social norms now and we just went for it."
Facebook is largely a rip-off (or at least knockoff) of the good social networking features developed by Swartz for Reddit, such as the thumb's up feature for ranking viewer response to open posts - except Reddit has a thumb's down feature, not just an 'unlike'.
More importantly, Reddit didn't mine your data to make NSA profiles of you, your relatives and friends.
Aaron Swartz said, "Information is power. But like all power, there are those who want to keep it for themselves. The world's entire scientific and cultural heritage, published over centuries in books and journals, is increasingly being digitized and locked up by a handful of private corporations. Want to read the papers featuring the most famous results of the sciences? You'll need to pay enormous amounts to publishers like Reed Elsevier."
What we really mean by Information Age is the recent period in history during which all the information accumulated on all previous media has suddenly become available to everyone.  Aaron recognized the fact that instant communication with unlimited numbers of people over infinite distance has an exponential effect on human creativity.  He also knew it only works if it's free.   Richard Stallman said it best, "think of free speech, not free beer".
Aaron's argument was that you can't apply intellectual property rights to digital information, because it flows like speech. If we have a conversation and we can't repeat something we read or heard on television without being arrested, then conversation itself would be impossible.   It's not the same thing as printing pirated copies of a book that's under copyright and for sale. He wasn't defending privacy.  SOPA used 'piracy' as an excuse to hold bloggers liable for things like quoting the New York Times, etc.
In an industry where real activism has been considered dead since 2008, Aaron was just getting started.
F**K THE GUARDIAN CLASS
Lord Bertrand Russell described the New World Order in which the 'white coat priesthood' would be Plato's Guardian class:
"On those rare occasions when a boy or girl who has passed the age at which it is usual to determine social status shows such marked ability as to seem the intellectual equal of the rulers, a difficult situation will arise, requiring serious consideration. If the youth is content to abandon his previous associates and to throw in his lot whole-heartedly with the rulers, he may, after suitable tests, be promoted, but if he shows any regrettable solidarity with his previous associates, the rulers will reluctantly conclude that there is nothing to be done with him except to send him to the lethal chamber before his ill-disciplined intelligence has had time to spread revolt. This will be a painful duty to the rulers, but I think they will not shrink from performing it." The Scientific Outlook, Chapter XV, 'Education in a Scientific Society' 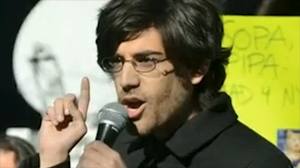 Aaron Swartz was one of those "rare occasions" that Lord Russell and "the rulers" dread.  He was supposed to become distracted by the  wealth his innovations gained and forget about the "cultural heritage of centuries" and everybody else. He was supposed to "abandon his previous associates and to throw in his lot whole-heartedly with the rulers".  He didn't.  He found his calling in organizing the first real grass roots campaign to defeat a "must be" bill on Capitol Hill.   That wasn't supposed to happen.
SUICIDED
It was Aaron's girlfriend Taren Stinebrickner-Kauffman who first found him dead in their Brooklyn apartment.  Her first blog on Tumblr said he "was not showing symptoms of depression".  At Aaron's funeral, his father, Robert Swartz, told mourners Aaron was "killed by the government."
Robert Swartz works for MIT and therefore had to retract his "conspiracy theories" about his son's death. As a practical matter, knowing his son was murdered probably intimidated Robert even more than losing his position at MIT. Taren's later statements show the process of trying to make sense of what happened. She went from saying "I don't know exactly why Aaron killed himself"  to rationalizing.  Maybe it was "a persecution and a prosecution that had already drained all of his financial resources."
And finally she believed he was pushed to suicide by "a system where incentives and power structures align for prosecutors to destroy the life of an innovator like Aaron in the pursuit of their own ambitions."
Aaron, "It's not over yet.   It's up to you."
WAS AARON THE SORT WHO WOULD HANG HIMSELF IN 'DESPERATION'?
We need to start a controversy about whether people believe it or not.  That's what Aaron would do. 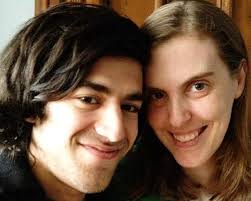 (with Taren Stinebrickner-Kauffman)
Because his death will prove in vain as long as he's ruled a suicide.  Suicides can't be martyrs, that's common sense.  Our manipulators always turn movements into a private joke to mock the victims.
If a controversy on the matter got going maybe people who knew him would start to question it too.  Lies are self-reinforcing like 911 - the more people invest into believing the lie, the harder it gets to see through it.
In June 2013, Aaron Swartz was inducted posthumously into the 'Internet Hall of Fame' in the category of "innovators", alongside GNU founder Richard Stillman, and Wikipedia front man Jimmy Wales.   Such awards say a lot about the 'Hollywood-ization' of Silicon Valley.   While Richard Stillman and Aaron Swartz are actual innovators, Wales is a front man - like Mark Zuckerberg and Bill Gates.
-----
See     AARON SWARTZ INTERVIEW (YOU TUBE)
From the Documentary "War for the Web"      https://www.youtube.com/watch?v=-OhyBJxg9RA#t=7
REMEMBER AARON SWARTZ official website
Also by Richard Evans- Was Aaron Swartz Murdered?

I like this article. Even the part parodying (via Russell) the outrageous hubris of Plato.

I'm very sorry that this article is probably true. I hope to meet this fine man in the "next world". I believe in the next world because this one is so bad that it's not even a neutral state. There has to be a balancing somewhere.

To Larry:
> It makes us dumber faster because all we care about is Kim Kardashian's latest baby bump.

I guess internet is all about that *sigh*

What about sharing cooking recipes with the world? How about tips on taking care of your car or house, keeping dogs, maintaining an aquarium? Sharing information and opinions about religions, books, sport, music, politics, science, world's languages and cultures? You could learn webdesign or computer programming by using nothing but the internet.

If it weren't for internet, how would we receive information from that old geezer Henry Makow? :) How the hell would his articles illuminate (sorry Henry, I couldn't resist) his readers? I can't imagine him writing letters to all of us for every single article.

How would we see Henry's readers' comments on his articles? All those letters would have to be flown to and from Canada. Just imagine what CO2-Taliban would say about that, aside from the fact that we'd actually destroy huge numbers of trees.

Yes, there's loads of crap on the internet, but also wonderful, entertaining and educative stuff. If we were to condemn the written word because of all the lies and filth in the mainstream media, we'd be throwing books like Bible and Qoran (to name just a few) on the garbage pile as Illuminati would surely like us to do. Don't let all the shit discourage you from seeing the many pearls, dude !

"Aaron recognized the fact that instant communication with unlimited numbers of people over infinite distance has an exponential effect on human creativity."

It makes us dumber faster because all we care about is Kim Kardashian's latest baby bump.