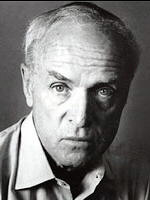 Left, Michael Straight (1916-2004) was a wealthy American heir who became a
KGB spy but later recanted.

Stalin wanted to groom him to become President of the United States.
The idea of a "sleeper agent" becoming the US President is noteworthy today
because of suspicions about the sitting President.

These suspicions are also fueled by the famous article by Tom Fife,
"The First Time I Heard the Name Barack Obama." Living in Moscow in 1992,
Fife was told Obama would become the first black president.

Straight was educated at the London School of Economics and Trinity College. While at Cambridge University he became friends with John Cornford, Kim Philby, Guy Burgess, Donald Maclean and Anthony Blunt. Straight joined the British Communist Party after the death of Cornford in the Spanish Civil War...

Roland Perry, the author of The Last of the Cold War Spies: The Life of Michael Straight (2005), has argued that Joseph Stalin wanted Straight to be groomed as a future President of the United States: "According to Yuri Modin, the most successful KGB control for the Cambridge ring, Straight was viewed as a potential top politico - a long-term 'sleeper' candidate. Stalin and the KGB would always be prepared to support and guide someone for however long it took to get an agent into high office, even the White House. In many ways, Straight was the near-perfect candidate.

"He was a dedicated communist, now moving into KGB agency, with all the right credentials for high office. Straight had the family background in Washington politics, not to mention Wall Street. He had independent wealth, a near-essential prerequisite, and his skills were outstanding. His height - 6'3" - and good looks would win votes too, especially in the United States where Hollywood images were beginning to impinge on the political arena. The politics he espoused would have to be packaged to make them digestible to a majority vote. Yet he could always slip in under the guise of a liberal democrat, who had matured away from his wayward youth in faraway Cambridge, England."

After returning to the United States in 1937, Straight worked as a speechwriter for President Franklin D. Roosevelt and was on the payroll of the Department of the Interior. Klugmann put him in touch with KGB agent, Iskhak Akhmerov, who introduced himself as Michael Green. He provided material to Akhmerov but this was of little use to the Soviet Union. Akhmerov reported that Straight "does not yet provide authentic materials, but only his notes," which are out-of-date. In 1940, Straight went to work in the Eastern Division of the U.S. State Department.

After the United States entered the Second World War, Straight joined the United States Army Air Forces as a B-17 Flying Fortress pilot. In 1946 Straight took over as publisher of his family-owned The New Republic magazine (his parents had established the magazine with Walter Lippmann and Herbert Croly in 1914). Straight appointed the leading left-wing politician, [and future Vice President] Henry A. Wallace as editor of the magazine on a salary of $15,000 a year. Wallace wrote that: "As editor of The New Republic I shall do everything I can to rouse the American people, the British people, the French people, the Russian people and in fact the liberally-minded people of the whole world, to the need of stopping this dangerous armament race."

Wallace formed the Progressive Citizens of America (PCA). A group of conservatives, including Henry Luce, Clare Booth Luce, Adolf Berle, Lawrence Spivak and Hans von Kaltenborn, sent a cable to Ernest Bevin, the British foreign secretary, that the PCA were only "a small minority of Communists, fellow-travelers and what we call here totalitarian liberals." Winston Churchill agreed and described Wallace and his followers as "crypto-Communists".

In January 1948, The New Republic reached a circulation of a record 100,000. Michael Straight was unhappy with Wallace's involvement of the Progressive Citizens of America and his collaboration with the American Communist Party. Straight was a supporter of the Marshall Plan and the anti-communism policies of President Harry S. Truman and therefore decided to sack Wallace as editor. Straight became editor until resigning in 1956. He was replaced by Gilbert A. Harrison.

Straight now concentrated on a literary career. His first book, Trial By Television, was an attack on McCarthyism. He also wrote several historical novels about the American West. This included A Very Small Remnant, about the Sand Creek massacre of 1864, and Carrington, about the Fetterman Massacre, where Captain William J. Fetterman and an army column of 80 men were killed by a group of Sioux warriors in December 1866.

In 1963 Straight was offered the post of the chairmanship of the Advisory Council on the Arts by President John F. Kennedy. Aware that he would be vetted - and his background investigated - he approached Arthur Schlesinger, one of Kennedy's advisers, and told him that Anthony Blunt had recruited him as a spy while an undergraduate at Trinity College. Schlesinger suggested that he told his story to the FBI.

Straight's information was passed on to MI5 and Arthur Martin, the intelligence agency's principal molehunter, went to America to interview him. Straight confirmed the story, and agreed to testify in a British court if necessary. Christopher Andrew, the author of The Defence of the Realm: The Authorized History of MI5 (2009) has argued that Straight's information was "the decisive breakthrough in MI5's investigation of Anthony Blunt"...

Blunt was interviewed by Arthur Martin at the Courtauld Institute on 23rd April 1964. Martin later wrote that when he mentioned Straight's name he "noticed that by this time Blunt's right cheek was twitching a good deal". Martin offered Blunt "an absolute assurance that no action would be taken against him if he now told the truth".

Martin recalled: "He went out of the room, got himself a drink, came back and stood at the tall window looking out on Portman Square. I gave him several minutes of silence and then appealed to him to get it off his chest. He came back to his chair and confessed." He admitted being a Soviet agent and named twelve other associates as spies including Straight, John Cairncross, Leo Long, Peter Ashby and Brian Symon.

Straight later served as the deputy chairman of the National Endowment for the Arts from 1969 to 1977. In 1983, Michael Straight detailed his communist activities in a memoir entitled After Long Silence. He admitted that while working for the Department of the Interior he passed on reports to a Soviet handler he called "Michael Green". He later insisted he had not provided anything that "contained any restricted material".

However, according to TD: "But six years later the KGB released his file which showed that, using the codename 'Nigel', he had sent telegrams, ambassadors' reports and political position papers from the State Department."

According to Richard Norton-Taylor: "Straight's marriages to Belinda Crompton and Nina Auchincloss Steers, a writer and stepsister of Aristotle Onassis, ended in divorce. His third wife, Katharine Gould, a child psychiatrist, survives him, as do five children from his first marriage."

Michael Whitney Straight died of pancreatic cancer at his home in Chicago, Illinois, on 4th January 2004.

Makow comment-  Obama has also been linked to the CIA. At some level, I suspect the CIA and KGB are one, the operating arm of the secret government and the NWO.