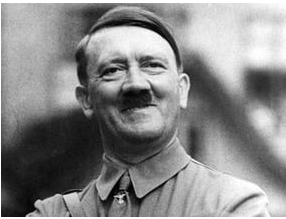 The FBI evinced little interest in credible claims
that Hitler survived the war and was living in Argentina.
This adds weight to suspicions he was an Illuminati agent.

A recently declassified document reveals that the FBI knew Hitler had not committed suicide and was living in Argentina. The document can be found on the FBI's own website.

The report presents testimony of an informant who approached the FBI in Los Angeleson  August 28, 1945 with information on Hitler in exchange for asylum. He said he was given $15,000 for his role in Hitler's escape.

The documents states, 'â–ˆâ–ˆâ–ˆâ–ˆ claimed to be one of four men who met Hitler and his party of about 50 when they landed from two submarines in Argentina approximately two and a half weeks after the fall of Berlin May 2,1945.'

'â–ˆâ–ˆâ–ˆâ–ˆ explained that the subs landed along the tip of the Valdez peninsula in the Gulf of San Vatias. â–ˆâ–ˆâ–ˆâ–ˆ told â–ˆâ–ˆâ–ˆâ–ˆ that there are several tiny villages in this area where members of Hitler's party would eventually stay with German families. He named the towns as San Antonia, Videma, Neuquen, Muster, Carmena, and Rason.'

He describes a surreal scene of top Nazis' climbing the Andes Mountains on horseback:

'By pre-arranged plan with six top Argentine officials, pack horses were waiting for the group and by daylight all supplies were loaded on the horses and an all-day trip inland toward the foothills of the southern Andes was started. At dusk the party arrived at the ranch where Hitler and his party, according to â–ˆâ–ˆâ–ˆâ–ˆ, are now in hiding.' This part is not credible since it is more than 500 km from the coast to the Andes.

He gave specific physical details about Hitler. 'According to â–ˆâ–ˆâ–ˆâ–ˆ, Hitler is suffering from asthma and ulcers, has shaved off his mustache and has a long "but" on his upper lip.'

He offered to identify the three other men who assisted him, and to locate Hitler.  'If you go to a hotel in San Antonia, Argentina, I will arrange for a man to meet you there and locate the ranch where Hitler is.'

The FBI never took up his offer. The informant also gave an interview to the Los Angeles Examiner on July 29, 1945.  Apparently, the story was not published.

HITLER WAS IN ARGENTINA

The FBI had many more sightings of Hitler in Argentina.

The reports should have been taken seriously as the Argentine government's policy of providing sanctuary to fugitive Nazis was well known.

Many books have been written about the Fuehrer's life in Latin America including 'Hitler's Escape' (2005) by Ron T Hansig, 'Grey Wolf' (2013) by Dunstan and Williams and 'Hitler in Argentina' (2014) by Harry Cooper.

Arguably the best is 'Hitler's Exile' by Argentine journalist Abel Basti. He visited German compounds surrounded by security guards, interviewed witnesses in nearby villages, and collected hundreds of media reports and government documents in Argentina that state matter-of-factly that Hitler was laying low within their borders. 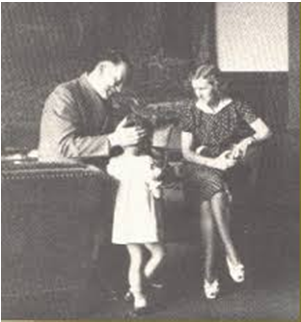 left. Basti says this is a photograph of Adolf, Eva Braun and their daughter Ulrich in Argentina.

In an interview on Deadline - Live, an Argentine news program, Abel Basti said, "Hitler escaped via air from Austria to Barcelona. The last stage of his escape was in a submarine, from Vigo, heading straight to the coast of Patagonia. Finally, Hitler and Eva Braun, in a car with a chauffeur and bodyguard--a motorcade of at least three cars--drove to Bariloche (Argentina).

"He took refuge in a place called San Ramon, about 15 miles east of that town. It is a property of about 250,000 acres with a lake-front view of Lake Nahuel Huapi, which had been German property since the early twentieth century, when it belonged to a German firm by the name of Schamburg-Lippe."

"I was able to confirm the presence of Hitler in Spain thanks to a--now elderly--Jesuit priest, whose family members were friends of the Nazi leader. And I have witnesses that allude to meetings he had with his entourage at the place where they stayed in Cantabria."

"In addition, a document of the British secret services reveals that in those days, a Nazi submarine convoy left Spain, and after stopping in the Canary Islands, it continued its journey to the south of Argentina.

"Hitler lived as a fugitive with his wife and his bodyguard. His first years were in Patagonia, and then he lived in the more northern provinces [of Argentina].

"In Argentina, I have interviewed people who had seen and met with Hitler. In the Russian archives, there is abundant documentation that shows that Hitler had escaped."

"The U.S. has just reclassified [under national security auspices] for 20 [more] years all official material related to this story, and when that deadline is met, it will probably be reclassified. "The British reclassified all related documentation for 60 more years. The researchers cannot access that information."

Colonel W. J. Heimlich, Chief of U.S. Intelligence in Berlin, concluded, "There is no evidence beyond that of hearsay to support the theory of Hitler's suicide. On the basis of present evidence, no insurance company in America would pay a claim on Adolf Hitler."

In his book Speaking Frankly (1947), Secretary of State Jimmy Byrnes wrote; "While in Potsdam at the conference of the Big Four, Stalin left his chair, came over and clicked his liquor glass with mine in a very friendly manner. I asked what was his theory about the death of Adolf Hitler and he replied - Hitler is not dead. He escaped either to Spain or Argentina." (Quotes are from Hitler in Argentina)


In the immediate aftermath of Hitler's disappearance, the Soviets made a series of contradictory statements, bizarrely claiming they had found his remains one day and that he had escaped the next.

First, they said his body wasn't found. Then, they proclaimed Hitler's remains had been discovered on May 4th 1945. However, Marshall Zhukov, the head of the Soviet army, announced on the 9th June, 'We did not identify the body of Hitler. I can say nothing definite about his fate. He could have flown away from Berlin at the very last moment.'

The only evidence that Hitler committed suicide are bone fragments from the Soviet archive. For years the Russians have insisted that these fragments are of Hitler. This lie was blown in 2009 when an American researcher carried out tests on skull fragments and found they were those of a young woman.

The Russians have never got their story straight and presented false evidence. Was the Illuminati Soviet leadership protecting one of their own?

Their actions certainly aided Hitler's escape. NÃ¼rnberg Judge Michael Mussmanno wrote in his book Ten Days to Die (1950) that; "Russia must accept much of the blame that Hitler did not die in May 1945."

Although the informant offered to identify the others involved, and to locate Hitler, the FBI determined "it would be impossible to continue efforts to locate HITLER with the sparse information to date."
The fact that neither the FBI nor Mossad nor the mainstream media had any real interest in Hitler's whereabouts suggest that he was an Illuminati agent and that the official narrative of WW2 is bunk.

Hitler protected Martin Bormann who was definitely a Soviet agent. The implication is that Hitler was also a traitor and this is the real reason neither the Russians nor the West were concerned with his post-war career. 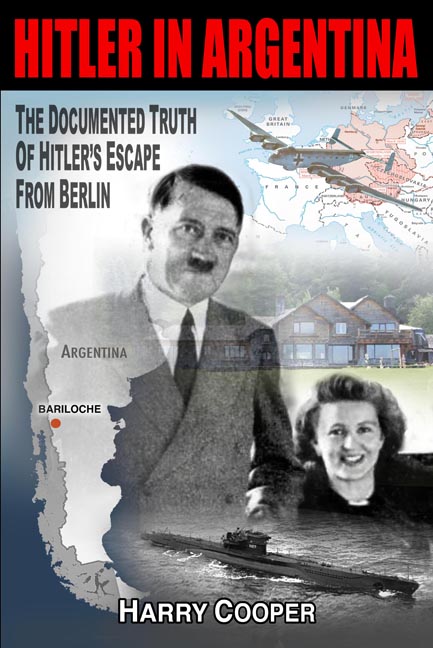 First Comment from Harry Cooper, author of Hitler in Argentina:

We saw your blog regarding this topic and this is absolutely correct.  We broke this story more than a decade ago, published our first book on this subject in 2006 and our newest work on this is just out.  You quote Abel Basti - in my opinion, probably the very best researcher in Argentina on the subject of Hitler living there.  I have personally been to Bariloche twice, to Cordoba twice, to the "secret" island off Brazil where the ships and U-Boats took on fresh water and food for as much as two years after the end of the war and I go to Germany several times each year.

Look to our website at www.sharkhunters.com and click through PREVIOUS PATROLS to see where we have visited, with whom we have visited (under VETERANS) and what has been discovered.  One of our own agents got hundreds of such FBI and CIA (OSS) documents declassified a few years ago.

The "Illuminati Jews" are the organizers of the world. It is next to impossible to start a political movement with any kind of substantial media recognition or mega capital without them.

They recruit the actors, give them their scripts, and then put their agenda into play.

The German people and Hitler himself apparently believed that the Socialist Movement of Nazi Germany was independent of World Zionism. It was this belief that help facilitate their downfall and destruction. Was Hitler a "knowingly dupe" or an "unknowingly dupe" ? We really don't know for sure. Hitler was not recognized as a scholar as much as he was a patriotic veteran of WW1.

As far as Hitler being shielded by his once Illuminati backers in his supposed "getaway" to Argentina I seriously doubt it. Once you no longer serve their purpose of being a "useful idiot" you're often disposed of because one day you could finger them.