Heroine of the Resistance: Elizabeth Dilling 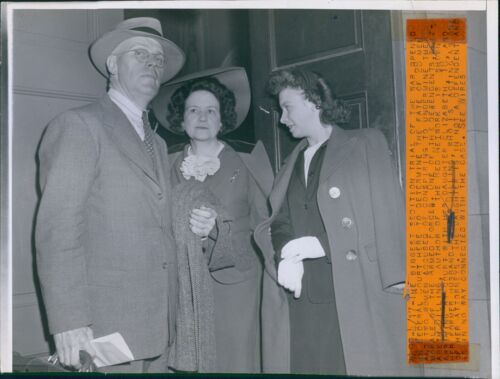 
Apart from Father Coughlin, no one did more to expose
the true satanic nature of Judaism and Communism than
Elizabeth Dilling (1894-1966.)
We have ignored her warning and are paying an ever-increasing price.

Her book "The Jewish Religion: Its Influence Today"  (Originally titled, "The Plot Against Christianity") is online.


Elizabeth (Dilling) Kirkpatrick, was born in Chicago, Illinois, on 19th April, 1894. Her father, Dr. L. Kirkpatrick, was a physician. She attended a Catholic girls' school before studying music at the University of Chicago. She failed to graduate and married Albert Dilling, an engineer, in 1918.

"Our family trip to Red Russia in 1931 started my dedication to anti-Communism. We were taken behind the scenes by friends working for the Soviet Government and saw deplorable conditions, first hand. We were appalled, not only at the forced labor, the squalid crowded living quarters, the breadline ration card workers' stores, the mothers pushing wheelbarrows and the begging children of the State nurseries besieging us. 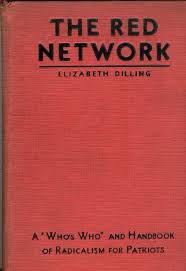 When she returned to America she went on a lecture tour where she expressed her hostility to communism.... In 1934 Dilling published The Red Network: A Who's Who of Radicalism for Patriots (1934). This included attacks on several well-known figures on the left...Her next book was an attack on President Franklin D. Roosevelt and his New Deal entitled The Roosevelt Red Record and Its Background (1936). Dilling argued that officials in Roosevelt's administration were linked to the American Communist Party. She also claimed that Eleanor Roosevelt was a "socialist sympathizer and associate, pacifist". During this period she became associated with Father Charles Coughlin.

The AFC had four main principles: (1) The United States must build an impregnable defense for America; (2) No foreign power, nor group of powers, can successfully attack a prepared America; (3) American democracy can be preserved only by keeping out of the European War; (4) "Aid short of war" weakens national defense at home and threatens to involve America in war abroad.

Dilling's writing became increasingly anti-Semitic. In The Octopus (1940), which she wrote under the pseudonym Rev. Frank Woodruff Johnson, she attacked the Jewish Anti-Defamation League and linked Jews to communism. She was also active in two other anti-Semitic organizations, Mothers' Peace Movement and We the Mothers Mobilize for America. 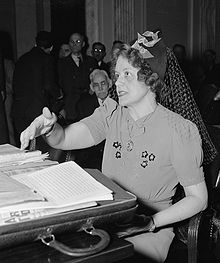 After the Pearl Harbor attack, Dilling was charged with sedition, along with 28 others, under the The Alien Registration Act (also known as the Smith Act) that made it illegal for anyone in the United States to advocate, abet, or teach the desirability of overthrowing the government.

The defendants were accused of holding pro-fascist views. Attempts were made to prove they were Nazi propaganda agents by demonstrating the similarity between their statements and enemy propaganda. The case finally ended in a mistrial after the death of the presiding judge, Edward C. Eicher. As a result of protests led by Roger Baldwin of the American Civil Liberties Union, Dilling and in December 1946, the government withdrew the charges.

In the 1950s, Dilling was a contributor to several anti-Semitic journals. This included Common Sense , edited by Conde McGinley. She supported McGinley when he was successfully sued for libel by by Rabbi Joachim Prinz in 1955. Her son, Kirkpatrick Dilling, was one of his defence attorneys. The jury awarded Prinz $30,000, agreeing that the publication was lying when it falsely claimed that he was "expelled in 1937 from Germany for revolutionary communistic activities".

Her second husband, Jeremiah Stokes, shared her political views and was the co-author with Dilling of The Plot Against Christianity (1964). It included the following passage: "Marxism, Socialism, or Communism in practice are nothing but state-capitalism and rule by a privileged minority, exercising despotic and total control over a majority having virtually no property or legal rights. As is discussed elsewhere herein, Talmudic Judaism is the progenitor of modem Communism and Marxist collectivism as it is now applied to a billion or more of the world's population. Only through thorough understanding of the ideology from which this collectivism originates, and those who dominate and propagate it, can the rest of the world hope to escape the same fate. Communism - Socialism was originated by Jews and has been dominated by them from the beginning."

Related - Henry Klein, a Jewish Lawyer, Defended Dilling et al in the Great sedition Trial of 1944
----------   More by John Simkin on US Communists and their CIA Financing

This article is timely, for I've been thinking that if the proxy wars our governments have been waging cross the line to direct "intervention" again,  some of our opinions about it could suddenly be called 'sedition'.   A lot of people thought Gaddafi got a raw deal.   A lot of people lately have expressed more respect for the Russian leader than our puppets - and that's pretty much the way we talk about, because we've been used to free speech.

You mention Fr. Coughlin, the old school Catholic priest. His weekly radio hour annoyed the Roosevelt Administration through FDR's first two terms in the 1930's, but as soon as war was declared on Dec. 7th 1941, he was off the air and a Federal gag order was placed on him.

We haven't seen that in our lifetime in the United States.   Nobody was charged with sedition or treason during all our wars after WWII.  In fact the things that were said and done during the Vietnam war were unprecedented not only in US history, but if the history of governments anywhere.

Why?  Because there hasn't been a declared war since Dec. 7th 1941. Under our original Constitutional Law, to charge people with sedition required a declaration of war.

But that's been a long time ago, and since the PATRIOT ACT and the establishment of the HOMSECA (Homeland Security), dozens of little bills and Executive Orders have pretty well gotten around all that. We may well see (and I expect we will) a SMACKDOWN on dissent that we're not used to in our countries, but did happen in the past. World War I, World War II, and the American CIVIL WAR.  Lincoln suspended Habeas Corpus and incarcerated POLITICAL PRISONERS (mostly journalists, civil servants, lawyers, educators - anyone who criticized Lincoln's policies).

Comments for "Heroine of the Resistance: Elizabeth Dilling"

Great article, I looked up her book and you can get it as a PDF as a public domain book (free).

Please continue to publish more stories like this, and stay away from the "Nazis are evil, gay, are all masons, control NASA, have infiltrated the CIA and like to kill people for the fun of it" Zionist script. People need to know that the new world order is primarily a Jew world order, like this story clearly exposes. Jews were pretty much behind most of the death and destruction in the 20th century, and they continue to propagate the lie of Germany as evil villain and perpetrators of the holocaust because once people realize what Hitler and the National Socialists were really doing (attempting to create a utopian society free from jewish controlled debt slavery) it is game over for them. They did NOT try to exterminate the jews, as that is a complete illogical fantasy that no thinking person can take seriously. It is the jews that DID perpetrate the greatest hate crime of all, exterminating millions of Christians, first in Russia during the revolution, then in Europe after WWII. In fact, many of the holocaust photos are German Christians from Dresden, Hamburg, etc. The Holohoax was concocted during the Nuremburg sham show trial, and the 6 million number goes all the way back to the end of the 19th century. In fact, there are over 200 mentions of the number in jewish papers and periodicals BEFORE the end of WWII:

Those who seek the truth are labeled conspiracy theorists as a put down, because of course, there is no factual basis to anything that goes against the official story of things. Yet ironically the biggest conspiracy theory of all, that a race of Christian people, home of Martin Luther and Goethe, deliberately set out to exterminate millions of people because they did not like them, must be taken as absolute fact. No debate whatsoever on this is allowed in our beloved democracy, and if you deny it, you can go to jail. What are they worried about? Only the end of their beloved state of Israel and control of over 90% of the globe.

Expose the U.S. and Britain as the stooges they are and always have been. Look what we did to German POW's at the end of the war:

re. "Nazis are evil, gay, are all masons, control NASA, have infiltrated the CIA and like to kill people for the fun of it" Zionist script.

I know you need to believe in someone but itler is a bad choice.

Must mention that "Mady,"[Paquita de Shishmareff] who was also indicted in that sedition trial but released early - too hot for them to handle, I've been told - often spoke of the work of her close friend Elizabeth Dilling.

She had nothing but praise for Henry Klein.

I have no idea where to find them but one of the accused (can't recall which at the moment) wrote a number of truly hilariously descriptive poems of the trial proceedings in the idle time the accused all sat in Eicher's court listening to dreary hours of unbelievable lies and propaganda. Mady had them and recited some of them to me with lots of laughter.

Also, she, too, sat on many stages as a speaker with all those names in American First, some of which also became friends with her.

Yes, Talmudic Judaism is the progenitor of World Order Marxism. The grandfather of Karl Marx was supposedly a Talmudic scholar and if true that would explain a lot of the ideology that is rooted in the 'Communist Manifesto'.

We have to admire this woman's courage, it's people like this that helped expose Communism for what it really was and is today.

Richard Nixon must also be mentioned here for all his work done to expose Communism's influence in Washington.

The 'Pumkin Papers' and the 'Alger Hiss' case are to his credit. He also was one of the prosecuting attorneys during the "Communist Red Scare".

It took a long time for the NWO Communists to reestablish that influence but they did regain back by 1974 when they led the chorus for Dick Nixon's resignation under the "media hyped" Watergate scandal that made a mountain out of a molehill.

The Nixon resignation is a landmark event that led to the loss of American's sovereign government for good.