(Left, This 12-min CNN documentary tells the story. Who is capable of such evil? Satanists.)

Who would steal an airliner, and imprison or kill its 239 passengers and crew?
The same people who stole the island where the airliner is probably hidden.

In 1970, 2000 islanders were forcibly deported to make way for a US air force base.
Although the base is worth billions, the natives didn't get a cent for their homes, possessions and way of life. They live in destitution in Mauritius and the Seychelles. They didn't object to the base.
All they wanted was jobs working there.  Instead, the US imported 3000 Filipinos. Talk about
bloody-minded.


The US government was afraid 450 fishermen and their families might make a claim. No wonder, our Masonic-run governments make us puke.

In order to convert the sleepy, Indian Ocean island of Diego Garcia into a dominating military base, the U.S. forcibly transported its 2,000 Chagossian inhabitants into exile and gassed their dogs. [The were allowed to take their clothes- nothing else.]

By banning journalists from the area, the U.S. Navy was able to perpetrate this with virtually no press coverage, says David Vine, an assistant professor of anthropology at American University and author of "Island of Shame: the Secret History of the U.S. Military on Diego Garcia" (Princeton University Press).

"The Chagossians were put on a boat and taken to Mauritius and the Seychelles, 1,200 miles away, where they were left on the docks, with no money and no housing, to fend for themselves," Vine said on the interview show "Books Of Our Time," sponsored by the Massachusetts School of Law at Andover. 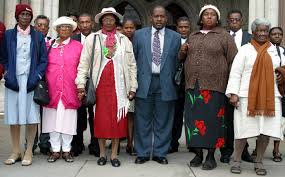 (left, in 2002 the natives sued the UK government and won, but the Masonic court system awarded them no compensation)

"They were promised jobs that never materialized. They had been living on an island with schools, hospitals, and full employment, sort of like a French coastal village, and they were consigned to a life of abject poverty in exile, unemployment, health problems, and were the poorest of the poor," Vine told interview host Lawrence Velvel, dean of the law school.

Their pet dogs were rounded up and gassed, and their bodies burned, before the very eyes of their traumatized owners, Vine said.

"They were moved because they were few in number and not white," Vine added. The U.S. government circulated the fiction the Chagossians were transient contract workers that had taken up residence only recently but, in fact, they had been living on Diego Garcia since about the time of the American Revolution. Merchants had imported them to work on the coconut and copra plantations. Vine said the U.S. government induced The Washington Post not to break a story spelling out events on the island...

Although the Chagossians were forcibly removed in 1971, they still hope to return, Vine says, and refer to their period of exile as one of "profound sorrow." Vine says they would be happy to live on the unused eastern portion of the island and work at the base but the U.S. instead "imports contract labor from other areas so they can send them home when the job is done." The island's exiled survivors and their descendants today number about 5,000.

Long off limits to reporters, the Red Cross, and all other international observers and far more secretive than GuantÃ¡namo Bay, many long suspected the island was a clandestine CIA "black site" for high-profile detainees, Vine wrote in a related article. Journalist Stephen Grey's 2006 book "Ghost Plane" documented the presence on the island of a CIA-chartered plane used for rendition flights. On two occasions former U.S. Army General Barry McCaffrey publicly named Diego Garcia as a detention facility. And a Council of Europe report named the atoll, along with those in Poland and Romania, as a secret prison.

The island became "a major launch pad" for the U.S. attacks on Afghanistan and Iraq, Vine said. In addition to its capacious harbor, the island readily supports some of the largest U.S. warplanes, including Air Force B-52s, B-1Bs and B-2s. Two years ago, the Pentagon awarded a $32 million contract to add a submarine base to the island's arsenal. 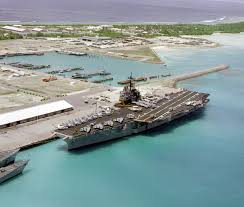 Diego Garcia had been a British possession until 1966, when London allowed the U.S. to use it as a military base in exchange for cancelling a $14-million British debt for a military hardware purchase. Some idea of the size of the base may be conveyed by the fact it is said by the Pentagon to contain 654 buildings.

Sherwood Ross is a media consultant to the Massachusetts School of Law at Andover. Reach him at sherwoodross10@gmail.com

According to Wikileaks CableGate documents (reference ID "09LONDON1156"), in a calculated move planned in 2009, the UK proposed that the BIOT become a "marine reserve" with the aim of preventing the former inhabitants from returning to their lands. A summary of the diplomatic cable is as follows: 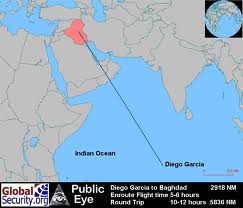 HMG would like to establish a "marine park" or "reserve" providing comprehensive environmental protection to the reefs and waters of the British Indian Ocean Territory (BIOT), a senior Foreign and Commonwealth Office (FCO) official informed Polcouns on May 12. The official insisted that the establishment of a marine park--the world's largest--would in no way impinge on USG use of the BIOT, including Diego Garcia, for military purposes. He agreed that the UK and United States should carefully negotiate the details of the marine reserve to assure that United States interests were safeguarded and the strategic value of BIOT was upheld. He said that the BIOT's former inhabitants would find it difficult, if not impossible, to pursue their claim for resettlement on the islands if the entire Chagos Archipelago were a marine reserve.

Additionally, Diego Garcia was used as a storage section for U.S. cluster bombs as a way of avoiding UK parliamentary oversight.

Related - Did MA-370 Passenger send a message from Diego Garcia?

What jumped out at me about the Diego Garcia war crime was the US's tactic of rounding up and killing the natives' pet dogs in front of their owners, to further traumatize the victims. This happens all the time in America now, where police invade a residence (usually the wrong address) and shoot the family dog in front of the owners and their children first thing. The US has become the evil empire it accuses everyone else of being.

I had been under the impression that the base was installed in preparation for invasion of Iraq, but I see here that the islanders were moved during the Nixon Administration. That was in the thick of 'Urban Renewal', the Johnson era policy that did exactly the same thing to urban black property and business owners -- invoking eminent domain to grab down land for peanuts, (now worth millions), as incarcerate the blacks in Stalinist concrete gulags called 'Projects' stranded in a wasteland of bulldozed buildings. In short they did to urban America exactly what they did to German and Soviet cities, except instead of using bombers and bulldozers, they used controlled demolition and bulldozers.

Anybody my age up should remember they did the same thing to the Islanders of Bikini atol and the other islands stolen by the Atomic Energy Department for fun with hydrogen bombs. That was broadcast again with the early 80's anti-nuclear energy media and demonstrations campaigns. But the story of dumping the Bikini islanders in Manilla or Macau or where-ever was secondary to the deliberate irradiation of US Navy enlisted men, who'd been enrolled without their knowledge into the fallout studies project.

Of interest now though, is whether the Diego Garcia 'revelation' has or can get traction enough to require Obama to 'do' something for his black brethren - maybe give them property in downtown Detroit, some Obamacare, and a 'Happy Meal'.

The article is probably true. The US military and government are quite evil.

I wanted to point out a difference of opinion about the possession of the island though.

Article stated..."Diego Garcia had been a British possession until 1966 "...I flew into Diego Garcia around January, 1995 on my way to the Persian Gulf as a member of the US Navy. The group that I was traveling with were allowed to enter the island AFTER we were screen by BRITISH {UK} IMMIGRATION. And they weren't very friendly. So, it seems to me that the Brits owed/possessed the island at least up until 01/1995. Just thought I would point out that small detail.