According to exit polls, Dutch anti-EU candidate Geert Wilders, left,
got just 12 per cent of the vote.

In Holland, voters are no longer playing the Illuminati's "democracy" game. They stayed home for EU elections Thursday. In the UK, Nick Farage's UKIP  made gains, but it appears the pro-EU labor party will be the ultimate beneficiary.  France votes on Sunday.

Only 38% of the Dutch electorate went to vote for the EU Parliament.

In 2005, the Netherlands voted 62% against the referendum for the EU Constitution. This was famously ignored in the Lisbon treaty. It looks like the same 62% stayed home yesterday.

The Telegraph blames the bad economy for the low turnout. But that masks a much deeper malaise: the EU simply lacks legitimacy. 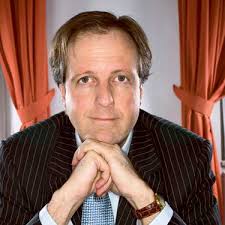 Geert Wilders was expected to win the election. Instead, he was defeated by all the mainstream parties, including the Democrat 66, led by Bilderberger Alexander Pechtold, left, widely expected to be Holland's next Prime Minister. He also trailed the Christian Democrats, boring 'centrists' who have been at the heart of NWO policy implementation for decades.

Wilders was expected to do well, because of his anti-EU rhetoric. But it seems the real opposition saw the futility of voting. Voting, even for an ostensibly anti-EU party, is simply saying the system works.

Wilders, a fanatical Zionist, (http://realcurrencies.wordpress.com/2010/03/15/another-agent-provocateur-geert-wilders/)  has been polluting the much needed anti mass immigration debate with virulent Islam bashing and more and more open racism. Recently, Wilders asked: 'Do you want more or less Moroccans?', after which his people chanted: 'Less! Less! Less!'.

While it keeps the chattering classes, including the mainstream media, busy, it just helps the divide and conquer game for which mass immigration exists to begin with.

These antics make him unacceptable to civilized people, disenfranchising them in this most crucial of issues and fracturing the opposition. Undoubtedly, this is the main reason why he exists and not to win elections and actually do something about both the EU and mass immigration. Both are fundamental to the NWO's strategy.

Farage of England's UKIP is a better campaigner, but he too has clear links to Zionist pressure groups. (http://www.presstv.ir/detail/2013/03/02/291622/ukip/) His economic policies are libertarian, promising only more hardship for his working class constituency. Neither he, nor Wilders, will touch the monetary system. To his credit, he's very lukewarm to both not-so-gay marriage and feminism.

But his main 'raison d'etre' seems to be to fracture the right: EU scepticism in Britain has been the Eurocrat's (and Whitehall's) bane for decades. It seems likely that, if UKIP continues to grow like it does, it will shatter Conservative election hopes. Labor can then bring Britain in the Euro and continue the rape of the British Isles with devastating mass immigration. Whites are expected to be a minority in only decades, with current immigration rates.

"The man of the future will be of mixed race. The races and classes of today will gradually disappear due to the elimination of space, time, and prejudice. The Eurasian-negroid race of the future, similar in appearance to the Ancient Egyptians, will replace the diversity of peoples and the diversity of individuals. Instead of destroying European Judaism, Europe, against her will, refined and educated this people, driving them to their future status as a leading nation through this artificial evolutionary process. It's not surprising that the people that escaped from the Ghetto-Prison, became the spiritual nobility of Europe. Thus, the compassionate care given by Europe created a new breed of aristocrats. This happened when the European feudal aristocracy crashed because of the emancipation of the Jews [due to the actions taken by the French Revolution] "

But the EU is moving forward more due to inertia than anything else. The 2005 referendum (besides the Netherlands, France voted 55% no, Ireland 53% no) was never repeated. France and the Netherlands are core countries in the EU and they need our vote. They need us to love our slavery.

And this love is not forthcoming.

Anthony Migchels is an Interest-Free Currency activist and founder of the Gelre, the first Regional Currency in the Netherlands. His articles on monetary reform are at Real Currencies, and various musings on 'Making Sense of the Senseless'.
also by AM- Disagreeing With Krishnamurti

Related- Hungary's Jobbik Party says Wilders and LePen are Liberals
Zionism, not Islam is the Enemy

Comments for "The EU And Faux 'Far Right Populism'"

The next elections in 2016 here in the US will closely resemble the mess in todayâ€™s EU.

Both national political parties are no longer distinct in character, or morality, or caring about anything not on their Gangster Menu.

We have already been sold down the river. The few that survive will be bitten by the rabid rats in the mud flats.

There are too many citizens who do what they do in Sunday church; sit on their butts and let God handle it. Get out of line and you are
told to shut up. God will only help those who stand up and fight.

I sense a similar disgust with electoral politics in America, not so much from apathy but more from the realization that electronic vote fraud is now encoded in the process, and the ballot box is not the way to fundamental change anymore. I went early to the polls for the May 20 primary, expecting a huge turnout because of the all hot button issues at stake (stopping Obamacare, Second Amendment under attack).

But there was just a trickle of voters all day in my district. The results showed that candidates endorsed by the Republican and Democratic establishments won their races handily, even when there was a clear alternative with anti-statist views.

I agree that the 'far right populism' displayed by select EU politicians is the same con artistry foisted on Americans.

But the Coudenhove-Kalergi quote is so shockingly evil I'm speechless at the moment.

These immigrants also loose their identity over time and really don't improve their status other than receiving food and shelter and general assistance from the IMF Austerity Fund.

Welfare never effectively assimilated these immigrants into the general population or it's culture very well at all. A lot of them can't even speak the language of their new host nation and this hinders them greatly in a high tech world economy.

Unfortunately some of these immigrants became frustrated and rioted in countries such as France and recently in Sweden. This has done nothing but isolate them all the more from the mainstream population.

This whole policy of involuntary immigration is not fair to the people of Europe or their imported immigrants.

This is typical case of disorder through chaos by the NWO.