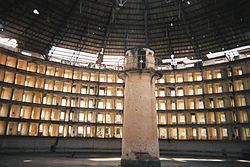 The Cybersyn Project in Allende's Chile was inspired in part by Jeremy Bentham's  "Panopticon" prison concept which allowed a single watchman to observe all prisoners. The prison had one enormous tower of several stories, but no interior walls, so that they is no privacy at all.  The prisoners must see and be seen not only by guards but by the other prisoners.  The idea was to psychologically induce the feeling of constantly being watched. Theoretically, this makes everybody behave.  (Or "bee hive").

In light of Glenn Greenwald's new book on the NSA, "Nowhere to Hide," Richard Evans
provides some timely background on the intellectual origins of the surveillance state.


"On a ship, if a man having the power to do what he likes, has no intelligence or skill in cybernetics *,  do you see what will happen to him and to his fellow-sailors?"          ---  PLATO,   Socrates' famous metaphor for "ship of State" in the Alcibiades I dialog.


CYBERNETICS is a term misunderstood by the general public.   It's not about turning man into a machine.   'Transhumanism' has been pushed in science fiction movies since the 1950's to cloud the real definition.

For social engineers and 'governance' planners, Cybernetics is a formulaic way to reduce everything to a set of variables that can be made to comply with predictable behaviors. The general public aren't trained in this way of thinking. 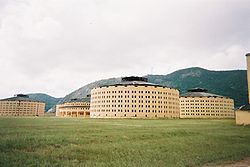 We would assume that the ways we control machines or livestock don't apply to how we manage people. A machine is a lifeless contraption, nothing but a tool. A man is living being with a mind and a soul.

Cybernetics steps lightly over distinctions like "alive" and "inanimate" to find a common definition. They define anything by what it does, rather than what it is.  By that definition, "Machines are what they do".

Thus anything that does something in space and time is a machine, a 'system'. This definition is how 1950's popular culture got the idea that "Cybernetics" means literally the combination of human beings and machine parts. While this is possible - we have pacemakers, hydraulic artificial limbs, and a growing industry developing "human enhancement", that's not the main goal of Cybernetics.

The goal is CONTROL. Cybernetics means "to steer". The metaphor implies steering anything from a ship, or a herd, or a State in the direction you want it.

Ever work for a corporation? "Corporate Culture" since the 1950's became a simulacrum of a society designed and governed by the laws of Cybernetics. This field is the origin of terms like "Human Resources" for what used to be called 'Personnel'. "Human Ecology" is the term the CIA used to categorize its MKULTRA mind control experiments.

It works on the mass, the collective of humans.  Individuals are a problem for them; some are less predictable.  Arthur Koestler's wonderful term "The Ghost in the Machine" was a reference to this "problem". The ghost is the human soul.

In 1970, Salvadore Allende was democratically elected President of Chile.  A medical doctor by profession, Allende, like Obama, gave beautiful speeches about equality and social justice, hope for a bright future for Chile, and "change". 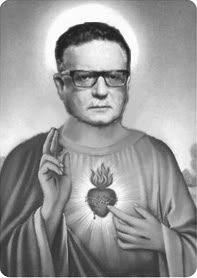 Dr. Allende was both a Marxist and 3rd generation Freemason, with direct support from Fidel Castro. Once elected, he proceeded to restructure Chile away from a free enterprise democracy into a Marxist dictatorship.

He imposed the same policies that were implemented by all Communist revolutions from Lenin to Mao.   US relations went sour when he nationalized the Chilean copper industry with confiscation privately owned land and assets.  Allende thought the Soviet Union would replace foreign investments lost from the US, as they had done for Castro.  Instead, Brezhnev snubbed him.


Result: by 1971 the Chilean economy collapsed with an inflation of around 700%.   Consequently the fragile coalition with the social democrats fell apart.  A majority in Parliament turned against Allende and attempted to legislatively halt Allende's policies, but the  regime refused to accept Parliamentary and judiciary decisions.   Imagine if Obama simply ignored acts of Congress, and seized private property by executive orders in the middle of an economic collapse. 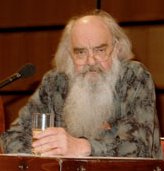 By August 1973, Chile's Parliament passed a resolution declaring that the Allende Government sought ". . . to conquer absolute power with the obvious purpose of subjecting all citizens to the strictest political and economic control by the State . . . [with] the goal of establishing a totalitarian system", claiming it had made "violations of the Constitution . . . a permanent system of conduct."

It was in this atmosphere that El Presidente Allende dispatched his 'Czar' of Nationalized Factories, Fernando Flores, to England to meet a hippie-looking technocrat named Stafford Beer, a staunch socialist who believed that cybernetic theory is the key to realizing Plato's Republic. 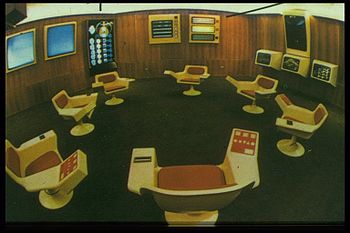 (left. The Operations Room where economic information was to be received, stored, and made available for speedy decision-making.)

Cybersyn (Cybernetics and Synergy) was Allende's attempt to solve the problems of converting a nation's economic infrastructure to a functioning socialist system using Cybernetic principles and information technology. It is also perhaps the most overrated management system in history.

When the general public was still in awe of the internet, Cybersyn remained legendary. It didn't help that it happened to be associated with an historical "sacred cow" of Communists and Socialists. Salvador Allende would be enshrined as a Marxist martyr second only to Che Guevara, which motivated the socialist intellectual and media network to mystify Project Cybersyn as a visionary work of genius far ahead of it's time.

Beer's 'Cybernet' was erroneously hyped as the first "socialist internet" decades later.  But it was not innovative.   It was an ad hoc imitation of 1960's ARPANET, cobbled together with obsolete Western Union telex machines installed in factory offices around the country. They only had access to two IBM 360 mainframe computers to crunch the data.

After Allende was overthrown on September 11 1973, the Pinochet government dismantled the "control center" and the "Cybernet" of teletype machines connected by closed circuit telephone to the Palace.    I believe is still says in Wikipedia the socialist romance version that the Fascist "destroyed" Cybernet, evidently because they were too stupid to figure it out.   But now we know that Beer's work simply wasn't what it was cracked up to be.

For the full story on Project Cybersyn, watch this video essay (fyi, 25 minutes) which lays bare the fantasy and fraud that Beer pulled off with the legendary "reverse Pantomicon control room".

There’s no simple way to explain Plato or his socialist models (simulacrums) springing to life for the last 100 years ….

Plato’s models are nothing new.

His CONTROLS were the driving force behind much of what Alexander The Great did in 4th century BC, Greece, Asia and Egypt.

However, it’s not easy to install Plato’s CONTROLS without computers and remote monitoring technology.

But the quiet elite now have all they need, so we shouldn’t be surprised by the police state coming to life before our eyes.

For nonviolent subjects, the state doesn’t need a prison.

A striking parallel can be drawn here between Allende of Chile and Putin of Russia.

When Allende seized the copper oligarchs land and then nationalized copper this infuriated the NWO. Allende obviously had been "duped" by the Marxist manifesto. You can confiscate land and assets as long as there not the wrong oligarchs. Also, the nationalization of resources puts the money in the hands of the government to build a better life for the masses, but this is not what Communism is all about.

Putin also did the same thing in Russia. The Jewish Oligarchs seized Russia's state owned property and industries through privatization under their installed puppet Boris Yeltsin.
Putin then imprisoned some of the oligarchs and confiscated some of their wealth. Like Allende this move also infuriated the NWO and soured their relationship with the US.

Communism was a "sham" from the beginning. It's all about putting the wealth in the hands of the very few and where equality only exists by common poverty and debt enslavement.

Nationalism, Religion, and Self Determination are all what the NWO Marxists wage war against.