Illuminati Were Conceived in Cynicism & Deceit 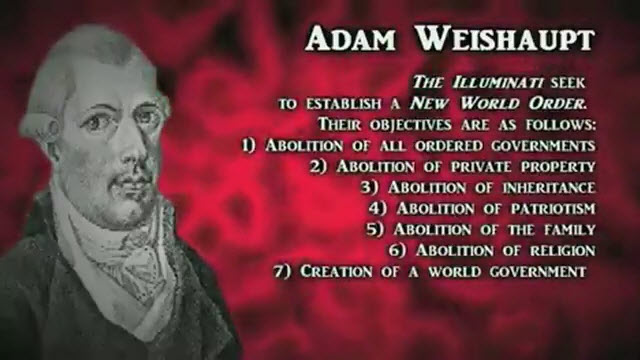 If you wonder why the world

is such a mess, look at the goals

and methods of the people who run it.

This excerpt provides some lesser-known details about the formation of the Illuminati and their methods. It focuses on Adam Weishaupt,

but he was only the front man for the Rothschild banking syndicate.

THE JEWS, THE MASONS AND THE FRENCH REVOLUTION

The Illuminati was founded on May 1, 1776[24] by a Bavarian professor called Adam Weishaupt, "a Jew by race who had been baptized a Roman Catholic and had become professor of canon law at the Roman Cathlic university of Ingoldstadt in Bavaria." (Jasper Ridley, The Freemasons, London: Constable, 1999, p. 114).

Another founder member, Count Mirabeau, noted in the same year of 1776: "The Lodge Theodore de Bon Conseil at Munich, where there were a few men with brains and hearts, was tired of being tossed about by the vain promises and quarrels of Masonry.

The heads resolved to graft on to their branch another secret association to which they gave the name of the Order of the IlluminÃ©s. They modeled it on the Society of Jesus, whilst proposing to themselves something diametrically opposed." [25-footnotes are at source]

"Our strength," wrote Weishaupt, "lies in secrecy. Therefore we must without hesitation use as a cover some innocent societies. The lodges of blue masonry are a fitting veil to hide our real aims, since the world is accustomed to expecting nothing important or constructive from them. Their ceremonies are considered pretty trifles for the amusement of big children. The name of a learned society is also a magnificent mask behind which we can hide our lower degrees."[26]

"Weishaupt constructed his organization on several levels, revealing his most radical plans only to his chosen co-workers. Weishaupt chose the members of his organization mainly amidst young people, carefully studying each candidature.

"Having sifted out the unreliable and dubious, the leaders of the order performed on the rest a rite of consecration, which took place after a three-day fast in a dark basement. Every candidate was consecrated separately, having first had his arms and legs bound. [Then] from various corners of the dark basement the most unexpected questions were showered upon the initiate.

"Having replied to the questions, he swore absolute obedience to the leaders of the order. Every new member signed that he would preserve the secrets of the organization under fear of the death penalty...

"The newcomer received a special pseudonym (order's name), usually borrowed from ancient history..., and got to know an ancient Persian method of timekeeping, the geography of the order, and also a secret code.

"Weishaupt imposed into the order a system of global spying and mutual tailing.

"Most of the members were at the lowest level of the hierarchy...

Weishaupt proceeded to create an inner secret circle within Masonry.

His first idea was to make Fire Worship the religion of Illuminism; the profession of Christianity therefore appears to have been an after-thought. Evidently Weishaupt discovered, as others have done, that Christianity lends itself more readily to subversive ideas than any other religion. And in the passages which follow we find adopting the old ruse of representing Christ as a Communist and as a secret-society adept.

But the whole religious side of Weishaupt's system is in fact simply a ruse to attract religious men. Weishaupt himself despised religion: "You cannot imagine," he wrote, "what consideration and sensation our Priest's degree is arousing. The most wonderful thing is that great Protestant and reformed theologians who belong to Q [Illuminism] still believe that the religious teaching imparted in it contains the true and genuine spirit of the Christian religion. Oh! men, of what cannot you be persuaded? I never thought that I should become the founder of a new religion."[32]

Only gradually, and only to a very few of his closest associates, did Weishaupt reveal the real purpose of his order - the revolutionary overthrow of the whole of society, civil and religious. Weishaupt has been credited with founding the idea of world revolution.[33]

Elements of all religions and philosophical systems, including Christianity and Masonry, were used by Weishaupt to enrol a body of influential men (about 2500 at one time[34]) who would obey him in all things while knowing neither him personally nor the real aims of the secret society they had been initiated into. The use of codes and pseudonyms, and the pyramidal structure of his organization, whereby nobody on a lower level knew what was happening on the one above his, while those on the higher levels knew everything about what was happening below them, was copied by all succeeding revolutionary organizations.

In 1782 Weishaupt convened a Universal Congress of Illuminati in Wilhelmsbad, and was well on the way to taking over Freemasonry when, in July, 1785, an Illuminatus was struck by lightning and papers found on him led to the Bavarian government banning the organization. However, both Illuminism and Weishaupt continued in existence - only France rather than Germany became the centre of their operations.

Thus the Parisian lodge of the Amis RÃ©unis, renamed the Ennemis RÃ©unis, gathered together all the really radical Masons from various other lodges, many of which were still royalist, and turned them, often unconsciously, into agents of Weishaupt. These adepts included no less than thirty princes. For it was characteristic of the revolution that among those who were most swept up by the madness of its intoxication were those who stood to lose most from it.

Some far-sighted men, such as the Apostolic Nuncio in Vienna and the Marquis de Luchet, warned against Illuminism, and de Luchet predicted almost exactly the course of events that the revolution would take on the basis of his knowledge of the order. But no one paid any attention.

But then, in October, 1789 a pamphlet was seized in the house of the wife of Mirabeau's publisher among Mirabeau's papers and published two years later.

"'We must overthrow all order, suppress all laws, annul all power, and leave the people in anarchy...'We must caress their vanity, flatter their hopes, promise them happiness after our work has been in operation; we must elude their caprices and their systems at will, for the people as legislators are very dangerous, they only establish laws which coincide with their passions, their want of knowledge would besides only give birth to abuses.

"But as the people are a lever which legislators can move at their will, we must necessarily use them as a support, and render hateful to them everything we wish to destroy and sow illusions in their path; we must also buy all the mercenary pens which propagate our methods and which will instruct the people concerning their enemies which we attack. The clergy, being the most powerful through public opinion, can only be destroyed by ridiculing religion, rendering its ministers odious, and only representing them as hypocritical monsters...

'Libels must at every moment show fresh traces of hatred against the clergy. To exaggerate their riches, to makes the sins of an individual appear to be common to all, to attribute to them all vices; calumny, murder, irreligion, sacrilege, all is permitted in times of revolution.'

"'We must degrade the nobles and attribute it to an odious origin, establish a germ of equality which can never exist but which will flatter the people; [we must] immolate the most obstinate, burn and destroy their property in order to intimidate the rest, so that if we cannot entirely destroy this prejudice we can weaken it and the people will avenge their vanity and their jealousy by all the excesses which will bring them to submission.'

"After describing how the soldiers are to be seduced from their allegiance, and the magistrates represented to the people as despots, 'since the people, brutal and ignorant, only see the evil and never the good of things,' the writer explains they must be given only limited power in the municipalities.

"'Let us beware above all of giving them too much force; their despotism is too dangerous, we must flatter the people by gratuitous justice, promise them a great diminution in taxes and a more equal division, more extension in fortunes, and less humiliation. These phantasies [vertiges] will fanaticize the people, who will flatten out all resistance. What matter the victims and their numbers? Spoliations, destructions, burnings, and all the necessary effects of a revolution? Nothing must be sacred and we can say with Machiavelli: "What matter the means as long as one arrives at the end?"'"[35]

Comments for "Illuminati Were Conceived in Cynicism & Deceit"

There is more to it than that. More specifically, evil must be bound.

The article today on your blog is a good presentation of the negative goals of the Illuminati.

It would be enlightening to know what their positives goals were. Did Weishaupt offer some positive goal to lure people in? Of course we can see that the Illuminati offered a goal of "feeling special" to those who joined, but was there a cover story about what good to humanity might come? Or did they simply not consider humanity worth anything?

It's getting relatively easy for me to spot the genesis and intent of all these organisations and movements, or Secret Societies and Subversive Movements as Nesta Webster titled her book.

Spot the Jew behind it , read the Talmud, read the particular organizations real aims (as this article clearly does for the Illuminists), and ask yourself if there is a vampire in sheep's or wolve's clothing. Rothschild insisted in his will that his sons adhere to their 'religious' doctrines, or as someone jokes, the family that Preys together, Stays together.

This history of subversion and disingenuous rabble rousing of course is as old as time and there appears to be an occult stream, possibly a bloodline, that runs it's course to these times that seem like end times, but for the most part, this heap big trouble started in 1776, this social engineering and pseudo scientific using and abusing of the populace. Somehow I don't think they are as confident as our fears would make them (1800, 2000, 2012..... still waiting for the one ring to rule them all).

Finally, it is what is missing in reading what they really think, and that is what Jesus said, pretty much all of it (as it was all good), that tells us why they ain't good for themselves in the long run (we shall see) and certainly not for us who are increasingly waking up (and we might do, taking action).

This article here has been quite an education on the history and war plan of the 'Order of Illuminati' against the world for the 18th century.

It is believed by some that the founding of the Protestant Church had the support of Jews whose goal was to create a schism within the Catholic Church. I once read a piece claiming that Martin Luther had some Jewish counselors and received monetary assistance from them also to help establish his church. This piece also claimed that John Calvin was Jewish. After the Protestant Church was established more schisms took place within this newly founded church that created more churches that differed on relatively minor doctrinal interpretation. Rather than seeking to find "common ground" they pursued the path of uncommon ground.

Like it or not, you can't take the Jews out of the Holy Bible. However, all Christians under the New Testament no longer recognize the division of the Jew and Gentile because all are equal now that accept Jesus Christ as their King, Lord, and Savoir. Also, there is no room for division in his Church. We are not Catholics, Mormons, Protesters, or Baptists either. We are believers in Jesus Christ or we are not.