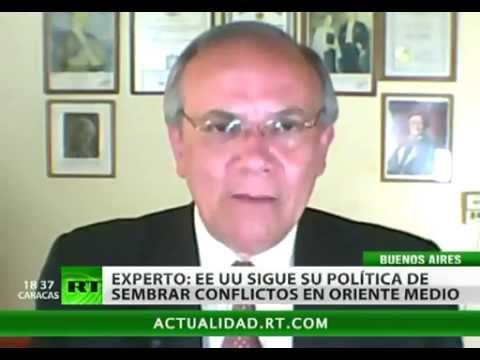 In Argentina, Organized Jewry is up to its usual game of repressing criticism
of Israel by accusing internationally renown commentator Adrian Salbuchi
of "anti Semitism" and threatening to prosecute him. See his Letter Below.

The real issue is not anti Semitism, but anti Gentilism. Organized Jewry
hates non-Jews and is conspiring to enslave them in a world government tyranny.
This gives non-Jews every right to be "anti Semitic" as long as this antipathy is directed against Organized Jewry, its supporters and its agents everywhere, many of whom are Freemasons and non-Jews.

Below Salbuchis letter, I posted an excerpt from  "Why is the Talmud not Hate Literature?" by Kevin Boyle which shows that Organized Jewry hates non-Jews.

Until Jews renounce the Talmud and the Illuminati agenda, not being an anti-Semite is being uninformed. As a Jew and son of real holocaust survivors, I urge people to embrace "anti Semitism" as a badge of honor. Let's take this smear away from these frauds by owning it.  If you do not hate those that hate you, you're a fool. If you do not hate evil, you're dead. To be an "anti Semite" does not mean you condone genocide. It means you oppose a destructive political, social and spiritual agenda.

Because of the Cabalist-Talmudist hatred for God and mankind, humanity is being held prisoner. The collective Jewish enterprise is fundamentally flawed because it is based on Satanism (Cabala) and supremacism. -Henry Makow

Ref: Your Statements to the Press - Our Invitation to a Public Debate

I learned from press reports published by the "Iton Gadol" and "Jewish Press Agency/Agencia de Prensa Judía" agencies, that your secretary General, Mr. Jorge Knoblovits (press report dated 18th August 2014) and your Deputy Vice-President, Mr. Waldo Wolff (press report dated 22nd August 2014), have accused me of "Anti-Semitism", threatening to file legal proceedings against me because of my geopolitical assessments of the war waged by the State of Israel against the Palestinian people in Gaza during last July and August.

Similar press accusations were made by Mr. Daniel Lew, president of OSA - Organización Sionista Argentina (Argentine Zionist Organization, which is affiliated to the DAIA) - and Messrs. Schlomo Samuels and Sergio Widder, officers of the Simon Wiesenthal Center.

In this respect, I would clarify that for years I have been presenting my analyses on this matter in various local and international news channels and media.  Lately, I have been doing this in articles addressing the complex and inter-related topics of the State of Israel, Zionism, Argentine Geopolitics, the Global Sovereign Debt System engineered by international banking circles, and the foreign policies of the United States, United Kingdom and the European Union.

These articles have been published by international media outlets RT/Russia Today (in English) and Actualidad RT (in Spanish) - both of which are the official news media of the Russian Confederation -, as well as in our local weekly TV program "Segunda República" which airs on Buenos Aires-based Channel TLV1 - Toda La Verdad Primero/All The Truth First - amongst other local and foreign media channels.

As founder of Proyecto Segunda República (PSR - Second Republic Project), international analyst, author of books on geopolitics and speaker, I cannot but construe your statements published in the aforementioned media outlets and others as well, as an attempt on the part of the DAIA to stifle all criticism of the policies of genocide carried out by a foreign power: the State of Israel.

To this, I would add your systematic personal accusations of "Anti-Semitism" against me, over the past seven years which you have published in your official "Annual Reports on Anti-Semitism" corresponding to the years 2006, 2008, 2009, 2010, 2011 and 2012.

I believe that your attitude only serves to generate confusion on fundamental complex matters that urgently need to be addressed in a public, open, balanced and honest debate. ...Accordingly, the Second Republic Project is promoting a national, regional and global debate on Zionism in general, the behaviour of the State of Israel in particular, and the impact that both have in different countries, particularly Argentina....


FROM THE TALMUD: Proof Organized Jewry Hates YOU

According to the Talmud (Gittin 57a)

Whosoever disobeys the rabbis deserves death and will be boiled in hot excrement in hell.
--BT Erubin 21b.

All gentile women without exception are: "Niddah, Shifchah, Goyyah and Zonah" (menstrual filth, slaves, heathens and prostitutes).
--BT Sanhedrin 81b - 82a.

The New Testament books of the Christians are to be burned whenever possible.
--BT Shabbath 116a.

"The laws (of fairness) mentioned above only apply between two Jewish neighbors. Gentiles do not necessarily respect these principles and, hence, there is no obligation to show them such consideration in return." Rabbi Ezra Basri, ibid., vol. 4, chapter 2.

All of the inhabitants of the world are compelled to accept the Noachide laws. If any non-Jew does not accept these laws he should be killed.
--Rabbi Moses Maimonides (The "Rambam"), Mishneh Torah: Hilchot Melachim U'Milchamoteihem ("Laws of Kings and Wars"), Section 8, Halacha 10.

Regarding a Jew stealing from a non-Jew, the act is permitted.
-- BT Sanhedrin 57a.

Jews may use lies ("subterfuges") to circumvent a gentile.
--BT Baba Kamma 113a.

If a Jew is tempted to do evil, he should go to a city where he is not known and do the evil there.--BT Moed Kattan 17a.

One could continue this kind of quotations for a very long time......and they get worse, if anything, when the Orthodox Jewish 'good book' moves on to sexual matters.

Do we not have a right to demand, measured against anti-racism and anti-religious discrimination laws as they stand, that no school should be allowed to propagate such filth, that this kind of poison should not be inflicted on innocent young Jewish minds........

That on the basis of the content of this foul book and in respect to UK legislation that:

1) All Yeshivas be forced to close immediately.

2) All Synagogues, being active centres of hate-speech and anti-gentile propaganda, be shut down immediately until such time as Orthodox Jewry formally recognises non-Jews as being human and renounces its historic (and clearly ongoing) commitment to the destruction of the gentile nations.
This is the only logical response to the continued imposition and onslaught of supremacist* Jewish gibberish against the decent majority population of the UK (and other western societies) whose tolerance will one day soon surely wear very thin indeed.

*Let anyone who thinks the motive behind the secular, humanist, tolerance, equality agendas being pressed on all western societies is the desire for equality, tolerance etc......let them read the complete thread of Jewish variations on a supremacist theme:

The Book of Deuteronomy
The Talmud
The Protocols of Zion
The Communist Manifesto
The writings of the Frankfurt School of Psychology.
In these writings (of Orthodox Jews to themselves) they make it very plain indeed what they are really about.

The World Conquerors: Chapter Sixteen, The Fulfillment of the Protocols and the Farewell Letter of a Hungarian Martyr (1958)

They have truly fouled things up with their two False Flags attacks on the Israeli Embassy in Buenos Aires (March 1992) and the AMIA/DAIA buildings (July 1994).  Both were bombed by them and they have failed dismally in "proving" they were car-bombs allegedly placed by Hezbollah.  The Embassy bomb they themselves allowed to die down since 1999 and the AMIA case untenable for them.  I don't know how much you've heard about this but I wrote an article for VoltaireNet (in the form of a conversation with Scholars for 911Truth co-founder Jim Fetzer) which you may want to browse through: http://www.voltairenet.org/article162474.html.  My lawyer, Juan Labaké, is an absolute expert on the matter and published a book with loads of proof that Mossad/CIA blew both buildings up that they had no choice but to just ignore us all.

In short, their Achilles Heel down here is if somebody (me) forces them to recognize four separate categories: Jews, Judaism, Zionism, Israel.  As we progress on that, we'll move one to further stages.

As an ordinary lowly rank-and-file Jew, I'm suffering, and am destined to suffer still more the same miserable fate at the hands of the occult Satanic despotism of Organized Jewry as all the rest of the Gentile masses, but with the double whammy of being set up to take the rap for it by same.

Yet even so, I can't even utter a defensive word of protest against it without being fingered as a self-hating "traitor" by my fellow victimized brethren, consigning me to yet a triple whammy.

In the end, I won't be done in so much by other Jews as by their elite Jew-controlled sell-out Gentile Freemason henchmen: lawyers, judges, cops, wardens, social workers, shrinks, doctors, tax collectors, CIA and NSA directors.  To all the good Gentiles out there in internet land, it's Jews like Dr. Makow and myself that you need and want on your/our side.  We could well be the best friends you've got.

Comments for ""Anti Semitism" Provoked by Jewish Hate of Goyim"

I wondered how long it would take for these globalists to really start trouble in South America and it seems they`ve got a good start. Massive deposits of oil shale have been discovered in Argentina and Soros is very interested! This will more than likely follow the same pattern that is being (and has been) used in the ME - instigated 'unrest'. If this doesn`t happen I will be very surprised!

[Since i have received no comments, I am taking one that seems germane from another article on another site.]

The Jews got hold of the Catholic Church the same way they got hold of America and many other nations: colonized an existing Central Bank, or created one from scratch. See: Federal Reserve. Sometime before Vatican II, the Rothschilds got hold of the Vatican Bank. Since then, the Roman Church has become the Devil’s Playground, a welter of Reds and Sodomites, from the College of Cardinals, through the Councils of Bishops, and on down to the Seminaries and the local congregations. Like the rest of our Jew-corrupted institutions, it is unsalvagable. In fact the Jews have engineered not merely an economic & political collapse, they have engineered a Civilizational collapse. Just how they themselves plan on surviving this collapse is not at all obvious. One might almost suppose they destroy the Host…because they enjoy destruction for its own sake.