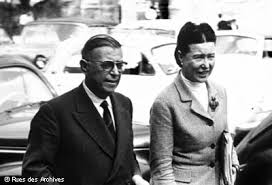 Despite condemning female subjugation, Simone de Beauvoir (1908-1986) was
a virtual slave of her lover the philosopher Jean Paul Sartre. "Her submissiveness to him was not simply a professional matter," a biographer wrote.

In 1943, Simone de Beauvoir was fired from her teaching job
for seducing female teenage students. Her teaching license was permanently revoked.

She and Jean-Paul Sartre had developed a pattern, which they called the "trio," in which de Beauvoir would seduce her students and then pass them on to Sartre.

Simone de Beauvoir's irrational hatred for women, marriage and family pervades her writings, which have
been force-fed to unsuspecting young women by our Illuminati-controlled media and schools.

by Lucien Valsan
From A Voice for Men (unabridged)
(Excerpt by henrymakow.com)


De Beauvoir was not just a public advocate for pedophilia, she was but an active ... abuser. She was recruiting pupils, exploiting them, and then passing them to Jean-Paul Sartre, sometimes separately, sometimes for a mÃ©nage Ã  trois. In her 2008 book,  Simone de Beauvoir? Meet Jean-Paul Sartre, Carole Seymour Jones characterizes de Beauvoir as a "child abuser."

For long periods, the couple became a "trio", though the arrangement rarely worked out well for the third party: at least two of de Beauvoir's former pupils found themselves becoming first her lover, then Sartre's, only for the couple to close ranks against them once the fun wore off.[...]

For de Beauvoir (as well as for Sartre), age didn't matter as long as the partners were younger than she and Sartre. The possibility that others might get hurt or sexually exploited wasn't even remotely on the eminent feminist's radar, who thought that "grooming" girls in order for Sartre to take their virginity (Sartre's words, not ours) was in and of itself an act of sexual empowerment for those girls.

But if these escapades ... don't convince you of the questionable character of de Beauvoir, let's have a look through her feminist writings, which are so filled with misogyny that it's hard to find an equivalent...

De Beauvoir's best known book, The Second Sex, had the following to say about wives:

The wife feeds on [her husband] like a parasite; but a parasite is not a triumphant master.

Over a quarter of a century later, in 1975, in a dialogue with another feminist, Betty Friedan, de Beauvoir  said:

No, we don't believe that any woman should have this choice. No woman should be authorized to stay at home to raise her children. Society should be totally different. Women should not have that choice, precisely because if there is such a choice, too many women will make that one. It is a way of forcing women in a certain direction.

Actually, de Beauvoir's hatred of maternity and mothers in general is very obvious throughout The Second Sex:

Motherhood relegates woman to a sedentary existence; it is natural for her to stay at home while men hunt, fish, and go to war.

[The mother] is plant and animal, a collection of colloids, an incubator, an egg; she frightens children who are concerned with their own bodies and provokes sniggers from young men because she is a human being, consciousness and freedom, who has become a passive instrument of life.

And when this eminent feminist started bashing women's bodies, nobody could stop her:

[...]a woman's body--and specifically the girl's--is a "hysterical" body in the sense that there is, so to speak, no distance between psychic life and its physiological realization. The turmoil brought about by the girl's discovery of the problems of puberty exacerbates them. Because her body is suspect to her, she scrutinizes it with anxiety and sees it as sick: it is sick.

The mammary glands that develop at puberty have no role in the woman's individual economy: they can be removed at any moment in her life.

De Beauvoir then goes on to explain how evil and oppressive the family is for the development of a girl. If the father has the audacity to be proud and appreciative of his daughter's successes, then that's yet another evidence of oppression of the daughter by the father. But if fathers get away fairly easy, mothers who dare to discipline their daughters get an even harsher admonition from the eminent feminist:

Mothers--we will see--are blindly hostile to freeing their daughters and, more or less deliberately, work at bullying them even more; for the adolescent boy, his effort to become a man is respected, and he is already granted great freedom. The girl is required to stay home; her outside activities are watched over.

So, are we clear? The fact that some parents were not letting their girls go out after a certain hour in the Nazi-occupied France in the middle of World War II constitutes oppression.

The hypocrisy of this woman is both fascinating to study and revolting at the same time. Simone de Beauvoir, worshiped even today as a great icon of the "good" feminism of the 1960s.

In other words, while numerous Romanians left in the USSR were being deported into the Gulag, while the intellectual elite of this country was being decimated in concentration camps like RÃ¢mnicu SÄƒrat, PiteÈ™ti, or Aiud, and while even 12-year-old boys were being tortured in Communist prisons for conspiracy against the socialist order, Simone de Beauvoir was publishing The Second Sex in which she was explaining how women's liberation is intimately related to the fate of socialism while vehemently denying, alongside with her lover, the Stalinist atrocities that were taking place in the same moments.

And we, the Romanian taxpayers, now pay for students to go to SNSPA and study this low-life as if she's someone we should look up to. Well, this is a real example of state-sponsored misogyny! But I have a feeling that the feminist elite is very comfortable with it.

Lucien Valsan is the European News Director for AVfM, the host of The Voice of Europe radio program, and can be reached at [email protected] .This originally appeared in AVfM Romania.

I think itâ€™s always worthwhile to point out the clay feet of our idols (or icons)! Both Beauvoir and Sartre trudged on big clay feet (!)-- as so many â€œintellectualsâ€ do! Much of what â€œintellectualsâ€ write and say is gobbledygook that simply mystifies the masses who conclude that these elitists must be a lot smarter than the common folks! Sartre, too, wrote much nonsense, like â€œexistence precedes essenceâ€! Yeah, yeah, yeah! Thatâ€™s supposed to mean we define ourselves as we go along, but what sentient being which/who has ever lived has been totally free of â€œoutsideâ€ influences of Nature or Nurture? (Sartre proposed getting around this Gordion Knot by declaring in â€œNo Exitâ€ that â€œhell is other peopleâ€!)

Hell can certainly be â€œother peopleâ€--especially when one is a child or teen set upon by sexual predators like Beauvoir or Sartre! The â€œWomanâ€™s Movementâ€ had best look for other icons than Beauvoir or, for that matter, Hillary Clinton, Sarah Palin, (not to imply that they are predators, just not very shiny examples of acuity and decency--of whatever gender!) Why must a Woman, or a Man, be anti-family to be â€œfreeâ€? Who defines such freedom? Canâ€™t commitment help to anchor freedom--which is very likely to be anarchic without commitment?

One swipe here is gratuitous: The author condemns Beauvoirâ€™s â€œsocialismâ€ because she advocated â€œsocialismâ€ but did not speak out against Stalinâ€™s version of it in Romania and elsewhere. Thatâ€™s unfair! I like â€œdemocracy,â€ but I donâ€™t like the way it is practiced in the US and in many other nations that call themselves democracies. I could particularize every time I say something favorable about â€œdemocracy,â€ but just because I donâ€™t does not imply that I am in favor of every distortion of it!

J.-P. Sartreâ€™s BEING AND NOTHINGNESS contains in its opening pages a question begging argument against the existence of God, which a first year student in logic could detect.

Yet, he gained the adulation of the Rive Gauche from this alleged master work of philosophic acumen, driving him to write "No Exit" and the pitiable book "The Words." That he would become de Beauvoirâ€™s companion says much about the lady herself, which your piece today nicely details.

Sartreâ€™s emphasis degenerated into a congerie of self-affirmation where one makes oneself whatever one willsâ€”and then dies in a meaningless trap of dirt and depth. There should be more works on the influence that these two hadâ€”the very bad influenceâ€”but this does not fit in with the academic elite who want to give everyone an expression untrammeled by Natureâ€™s unbending laws and punishment.

"So, are we clear? The fact that some parents were not letting their girls go out after a certain hour in the Nazi-occupied France in the middle of World War II constitutes oppression." -

The one who wrote this needs to have his/her head examined.
If German soldiers would ever force a French woman he would end up with a bullet in his head
This happened, however, plenty when the American soldiers arrived. In the first 6 months, 450
executions!

"So, are we clear? The fact that some parents were not letting their girls go out
after a certain hour in the Nazi-occupied France in the middle of World War II constitutes oppression."

The one who wrote this needs to have his/her head examined.

If German soldiers would ever force a French woman he would end up with a bullet in his head
This happened, however, plenty when the American soldiers arrived. In the first 6 months, 450
executions!

40 years ago when I was in art school, the artsy girls were all reading Simone de Beauvoir and Anais Nin. Male students were assigned to read homosexual crap like Wiliam S. Burroughs "Naked Lunch" and "poet" Allan Ginsberg.

In fact college men should burn anything by "the Beat Generation" and read Simone de Beauvoir with a critical eye. They would learn that the payoff of perversion for women is the power and control it makes them feel over the man.

William Burroughs was honest enough to decline the title of one of the 'fathers of the Gay movement', because he was always ashamed of his homosexuality. He said it was weakness. True masculine nature shows itself through self sacrifice and fortitude. Compulsive obsession with pleasure is effeminacy.

Not surprised at all. All these feminist superstars are and always were psychopathic control-freaks from interesting bloodlines ( Beauvoir was no peasant ) and an arm of the international socialist movement.

Their rhetoric is similar ( the housewife as an evil parasite with no personality, at once oppressed by society and oppressive towards poor men who do all the work - typical socialistic tactic to draw sympathy - and towards their poor enslaved daughters ). While there is some truth to it ( there is truth in almost everything esoterists throw at us ) in the sense that in fact housewives tend to be a historical ( having no opinion on "serious" matters such as politics and economy- fact that the system explores by reducing them all to "bimbos" ) in reality their bubbly, tolerant, appeasing personalities are a tremendous safe haven for any child, who has the chance to develop a bond of love and trust with someone and anchor his personality on it, growing up to be a confident, strong adult.

The system not only has a problem with this, but it actually hates women themselves, as Alan Watt emphasizes by mentioning their androgynous agenda. A. Pike, for example, wrote ( as C. Jung did ) that women have no souls, and can only reflect the the will of their husbands - they're base material, the ruler pointing down in the masonic symbol. Man is the fire, the initiator, woman is the water that reflects.
Emancipated women are men.