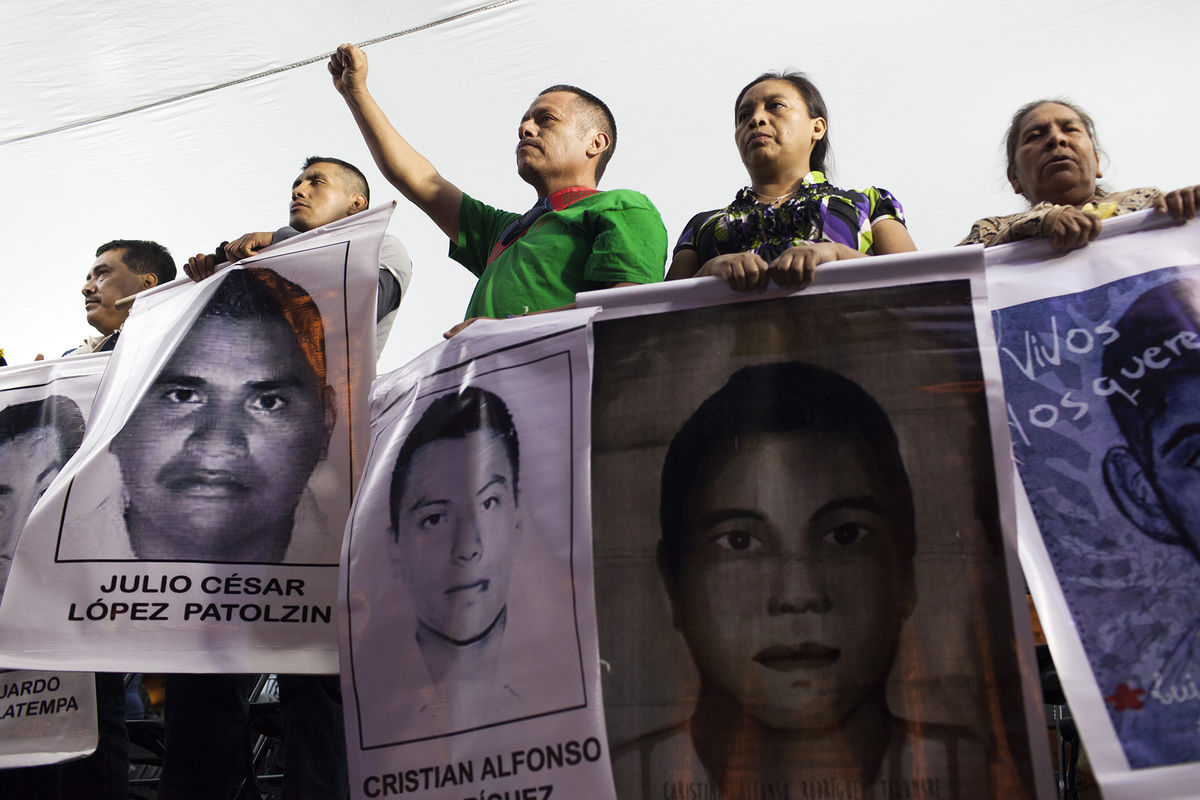 (left, Families demand to know fate of 43 teacher college students. Their disappearance caused a national crisis in Mexico.)
Saturday, a drug gang confessed to the murder of the 43 teacher-college students who were turned over to them by the local Mayor and police. This information has caused violent demonstrations and a political crisis. While I condemn this atrocity, the media does not convey the true character of this event. These dirt poor Marxist students were protesting for more handouts. They have been waging a 50-year battle with the state for increased subsidies and guaranteed employment as teachers. They routinely break the law, confiscating buses and taking over toll booths. We are posting a sympathetic account of a confrontation they had with police three years ago to convey the revolutionary character of this conflict.
It seems the Illuminati media is downplaying this aspect. Do they wish to destabilize Mexico?

We print below a translation of a 17 December 2011 leaflet issued by our comrades of the Grupo Espartaquista de México, section of the International Communist League, and its youth group, Juventud Espartaquista. The leaflet denounces the brutal state repression against student protesters in the southwestern Mexican state of Guerrero.

17 DECEMBER 2011--At least since last November, students at the Rural Teachers College in Ayotzinapa, Guerrero, have kept up a movement to demand an increase in admissions, higher food stipends, job assignments upon graduating, and a guarantee that their school will not be shut down.

PRD governor Ángel Aguirre, together with the PAN federal government, responded to these basic demands on December 12 by unleashing police terror against a student protest on the Autopista del Sol [Mexico City-Acapulco highway]. The repressive forces of the state--federal, municipal and judicial police--opened fire on the students, killing two of them; four more were wounded, 22 arrested, and 20 have been reported disappeared (La Jornada, 14 December).

The demands of rural teachers-college students have changed very little in the last 50 years, and in all this time the response of the ruling capitalists/landowners--especially but not only in Guerrero--has varied from class disdain to more abject police/military brutality.

It is no accident that none other than [former PRI governor] Rubén Figueroa, member of a long line of brutal Guerrero caciques [local political bosses] who is responsible for the 1995 massacre in the town of Aguas Blancas, has come out in defense of Governor Aguirre. The bourgeoisie allocates resources for education in proportion to what its own priorities require for the training of capitalist society's future administrative, technical and ideological personnel.

Aside from that, they couldn't care less about the general education of the masses of exploited and oppressed--especially poor peasants and indigenous people. We communists fight for free, quality education for all--in the city and in the countryside--with open admissions and student stipends. Placing education at the service of the workers and peasants requires putting an end to the system of capitalist exploitation, which is dedicated to producing profits for the numerically small bourgeoisie, through a socialist revolution that expropriates the bourgeoisie and establishes a collectivized, planned economy to satisfy the needs of the population.

The calls for "punishment for the guilty" and against impunity only sow illusions in the capitalist state, which cannot grant "justice" to the exploited and oppressed masses. The state consists fundamentally of armed bodies of men at the service of the bourgeoisie to repress the workers and the poor. What this attack shows--once again--is that the PRD, like the PAN and the PRI, is a party of capital that has no qualms about unleashing repressive force against the workers and poor.

As we Spartacists have always insisted, the PRD, including AMLO [Andrés Manuel López Obrador], is a bourgeois party, whose differences with the PRI and PAN can be reduced to how best to administer the capitalist system of exploitation. The bourgeois state cannot be reformed and its nature will not change because it is headed by one or another capitalist politician. To end once and for all the murderous state violence directed against workers, poor peasants and other oppressed sectors, the working class--the only class with the social power and the interest to bring down capitalism--must destroy the bourgeois state and replace it with its own rule: a workers and peasants government, i.e., the dictatorship of the proletariat supported by the peasantry.

To achieve the above it is necessary for the proletariat to break with all bourgeois parties and politicians and forge a revolutionary workers party that can lead the struggle to end capitalism. This is the aim of the Grupo Espartaquista de México, section of the International Communist League (Fourth International)

Did anyone notice when media switched from reporting Mexican unrest as peasant uprising against the government, to "drug gang" cartels violence. What happened to government oppression of peasants in Oaxaca, and Chiapas?

The last I remember of Mexican unrest reported in American media as public rage against the elite was the summer of accusations that the election of Felipe Calderón was rigged. Somewhere since then American public perception blames it entirely on 'the drug cartels' without going into details. I call our "news" about ,Mexican wrestling".

I've said for years that we need full disclosure of all the secret treaties and trade deals that have been made since the 1980's between our secret society Presidents and theirs. We suspect that both the 'War on Drugs' and international drug distribution are inextricably entwined with the long term, cozy arrangement between the US and Mexican government, both controlled by a related elite.

Since the Bush(Reagan) 80's, US immigration policy provided cheap labor for the Masonic American building industry, while providing a 'steam vent' to lower Mexican rage at the entrenched patrón system. Unfortunately their "bourgeois" neighbors aren't the cause of Mexico's poverty. The middle class never is. They're just peasants with more money.

Disappearance of students in Iguala, Guerrero, magnifies violence, police corruption and silencing dissent as both the US and Mexico continue their systematic drug and weapons running ops.

Iguala has become a stronghold of Zapatistas, where Indigenous voices of autonomy continue to be vibrant, with dignity and justice. Http://www.bsnorrell.blogspot.com/2014/11/we-want-them-alive-search-for-mexicos.html

Not typical students what would you in their shoes...that is what I thought. Grass-root level...http://www.narconews.com/Issue67/article4761.html

As far I'm concerned what goes on outside my country is none of my damned business. The world was better off in the days when "news" came from other continents by sailing ship and there was not a thing that could be done about that past "news" so nobody worried about it. Over land it would come by horseback or even people walking. Again, past history, so don't worry about it. That goes for state to state as well. After all, each state is a separate nation, they are not supposed to be one giant homogenized pile of crap such as we suffer under today.

We have plenty of problems directly on top of us, why should we worry about every last little group of people in the world? Can't they take care of their own problems, just as we have to?

Seems all this country can ever do to help anyway is kill the people needing help. We never seem to see a war that we can't get into and make worse. Or create, if no one else has got one started.

Until the Illuminati-sponsored prohibition of "illegal drugs" is ended, we can look forward to this type of mayhem and murder continuing in Mexico and eventually making its way to the streets of the United States and eventually Canada. Drug prohibition is nothing but artificial price support for organized crime and rank-and-file prohibitionists are the best friends the Mexican and Colombian cartels ever had.

In Bogota 100% pure cocaine sells for $8 a gram and there is no widespread cocaine abuse even though possession of small amounts is perfectly legal. In Canada, cocaine is $100 a gram, addiction is a major problem and law enforcement wastes half of its time chasing small-time users.

Prohibition is the biggest, most costly scam in the history of the human race and ending it will greatly reduce the influence of the drug cartels and their prohibitionist allies in banking, law enforcement and the media.

I just read your article that makes light of the massacre of 17 and 18 year olds. These children receive absolutely no money for their schools which the government really does want to abolish. They are right about the corruption in their country. They work hard, and they tend to their crops and farms. They live on about 10 dollars a week and strive to teach the other poor children to read and write. Who cares about their political ideas. I am fiercely against Marxism, but in Mexico it might make sense as there is such a huge gap difference between the rich and poor, with corruption running through every walk of life. Props to these children who wanted to make a difference in the world.

The students ranged in age from 18-25. I don't think it is fair to say I made light of their massacre just because I tried to put it in context. Nobody deserves to be massacred. I believe the perps should be rounded up and punished.