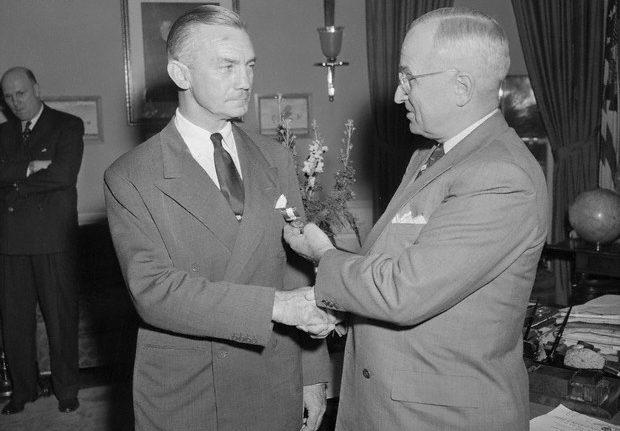 He opposed the creation of the state of Israel. His ruthless murder was covered up by the Zionist-controlled press. Thankfully, people like retired economist David Martin are still on the case.


A reminder that the real history of the modern world is the subversion of civilization by a satanic cult made up of Cabalist Jews and Freemasons. By virtue of their control of banking, success is contingent on dedication to world government tyranny and betrayal of the values we hold dear.


For eye opening details, be sure to read Dan's comment below this article.


President Truman relieved James Forrestal of his position in late March of 1949.  Within a few days he was committed, apparently against his will, to Bethesda Naval Hospital suffering from "exhaustion."  In spite of the invaluable service he had rendered to the country during World War II, first as Under Secretary of the Navy and then Secretary of the Navy, he had in 1948 and early 1949 been the subject of an unprecedented press vilification campaign, led by powerful columnists Drew Pearson and Walter Winchell, a Jew.

At around 1:45 am, May 22, some seven weeks after his admission to the hospital, Forrestal plunged from a 16th floor window of the hospital to his death.  A belt or cord, said to be from his dressing gown, was tied tightly around his neck.

(Forrestal portrait by reader, Doug Auld. His gallery of whistleblowers. )


On May 23, a review board was appointed by Admiral Morton D. Willcutts, the head of the National Naval Medical Center to investigate the death.  The board completed its work on May 31, but not until October 11 did it publish a brief, summary report of only a few lines.  No explanation of the delay was given.

The summary concluded that Forrestal had died from the fall, but it had nothing to say about what caused the fall, except to conclude that no one associated with the Navy was responsible.  In short, it did not conclude that he had committed suicide, as initial reports stated and the public is still given to believe.  No mention was made in the summary, or in those later October press reports, of the belt around Forrestal's neck.

The Willcutts Report, itself, was kept secret, and, curiously, no hue and cry was raised over that fact.  After two unsuccessful Freedom of Information Act tries with the National Naval Medical Center, I was finally able to get the report of the review board from the office of the Navy's Judge Advocate General, and my analysis is at http://www.dcdave.com/article4/040922.html .

At the time of the death, all the press made much of a book containing a morbid poem from Sophocles, "Chorus from Ajax," that Forrestal had supposedly been copying from shortly before his plunge from the window.  The press reports all say that the book and a transcription "were found," but they never say by whom.  Neither does the Willcutts Report.  No witness is produced who claims to have discovered the book or the transcription.  Rather, the first person to get a good look at Forrestal's vacated hospital room found broken glass on his bed, a likely sign of some sort of struggle.

She also described bedclothes half turned back, but the official "crime scene" photographs taken many hours later, show a bed with a bare mattress, an obvious sign of a cover-up.  One can also see that articles were moved around from one picture to the next:  http://www.dcdave.com/article4/040916.htm.  Needless to say, no news report has ever mentioned the broken glass or the laundering of the room before photographs were taken.

Pro-Israel writers like Arnold Rogow, Winchell biographer, Neal Gabler, Jack Anderson, Charles Higham, John Loftus, and Mark Aarons have continued the character assassination against Forrestal, falsely characterizing him as an an anti-Semitic nut who had made several previous suicide attempts.

The indications are very strong that Forrestal kept his no-suicide-attempt record intact on May 22, 1949, and became another casualty of the creation of the state of Israel in the same sense that Lord Moyne, Count Bernadotte, Yitzhak Rabin, Rachel Corrie, 34 crewmen on the USS Liberty, and Palestinian leaders on a regular basis have been casualties.

Two months after posting this article, I revealed in Part 3 of "Who Killed James Forrestal?" the strongest evidence yet that Forrestal was murdered.  I obtained Forrestal handwriting samples that clearly differ radically from the handwriting of the copied Sophocles poem.   Another important research milestone was reached in early February of 2010 when the proprietor of the ARIWatch.com web site, who uses the nom de plume of "Mark Hunter," put up a searchable htm version of the Willcutts Report, complete with his own analysis.

by Dave Martin
The Forrestal Murder and the News Media (Nov. 10, 2014)
Who Killed Forrestal?
First Comment from Robert K:

That's quite an enigmatic expression on Forrestal's face.  Might it be because of the handshake Truman is certainly laying on him?

Thanks Robert for noticing that could be a Masonic rip. A lot of Masons, like Charles Lindbergh for example, are not aware of the Mason's treasonous Cabalist Jewish agenda and get
into trouble,

Regarding a briefing before Roosevelt left for the Yalta Conference in September 1944, then Secretary of the Navy Forrestal wrote in his diary, "If any American suggests we act in accord with our own interests, he is apt to be called a Fascist or Imperialist, while if Uncle Joe (Stalin) suggests he needs the Baltic provinces, half of Poland and access to the Mediterranean, all hands in Washington will agree that he is a fine, frank, candid and generally agreeable fellow."  [George N. Crocker, 'Roosevelt's Road to Russia', 1959]

Forrestal rubbed against the grain on later matter.  He opposed the atomic bombing of Japan, favoring a negotiated armistice, seeing Japan as a future bulwark against Communism spreading in Asia.

But Truman didn't appoint Forrestal Secretary of Defense in 1947 for being a "Truther".  Forrestal was totally down with keeping the wartime intelligence network intact.  He knew about Operation Paperclip.  Most of all, he was an architect of the  National Security Act of 1947, which created the permanent Department of Defense, and ultimately the CIA, NSA, and the rest of it.

IN fact he was so enthusiastic building the new secret intelligence establishment that he feared losing his post if Truman were defeated in the 1948 election.   He may have precipitated his own downfall by meeting with Truman's opponent Thomas E. Dewey secretly (he thought) to assure he'd remain Secretary of Defense.   He got the guarantee from Dewey, but the 'October Surprise' just before the election was the headline, "HINT - FORRESTAL SEEKS TO STAY ON WITH DEWEY".

Needless to say Truman was livid, but he didn't fire Forrestal till March 31st, so that it wouldn't look so much like revenge.
Forrestal would be dead in under two months.

By why?  Here's the official account of Forrestal's itinerary between the day he was fired, and the day he died.

"On the day of his removal from office, he was reported to have gone into a strange daze and was flown on a Navy airplane to the estate of Under Secretary of State Robert A. Lovett in Hobe Sound, Florida, where Forrestal's wife, Josephine, was vacationing. Dr. William C. Menninger of the Menninger Clinic in Kansas was consulted and he diagnosed "severe depression" of the type "seen in operational fatigue during the war".

Sounds like he was drugged, taken to a private clinic in Kansas to have something done to keep him semi-catatonic, then delivered to the psych ward at Bethesda Naval Hospital.  The official Bethesda chart actually shows he was kept in 'narcosis' with Amobarbital for a week.  For the duration he was subjected to "a regimen of insulin sub-shock combined with psycho-therapeutic interviews." [ie, attempted re-programming].  Apparently this failed, "patient overreacted to the insulin".

It's not explained why a man undergoing such extreme treatment for depression was left unattended in a room with access to a 16-story window that could be opened from the inside.  What seems clear is that Forrestal was drugged and taken out of circulation in this clumsy, public way they used to do things.  These were the 'wild west' days of the budding shadow government.    I doubt Harry Truman ordered him liquidated just for talking to Dewey.   I also doubt Zionists would kill a former Secretary of Defense after he was fired. That wouldn't win Israel a lot of friends on Capitol Hill.

The most likely motive was that he "knew too much".  Under the circumstances, somebody made sure he never did any interviews with the press once he'd been fired.

This also puts legs on Harry Truman Taking a $2 Million bribe when his party had abandoned him to be the presidential hopeful. It was known that Truman became CFR member on or before the time of his reelection bid in 1948. It is also true that Truman abandoned Chiang Kai Shek by shipping him 1 million rifles minus the firing pins thereby allowing Chairman Mao to make China a communist country. Truman was also a mason and an Elitist who carried Tennyson's NWO poem Locksley Hall in his LEFT front pocket.

From what I recall of research on the death of James Forrestal is his diary which was his constant companion was missing and this created much suspicion at the time. He was also reportedly investigating UFO's and 'alien life' which had been getting a lot of attention since the Roswell incident. He always carried this information which was included in his diary that somehow vanished from his night stand where it was last seen by a medical employee and visitor. Of course this would be most difficult to verify as all of his belongings are now lost to the ages (so to speak.)

My guess is that the Illuminat bumped-off every US President who died in office and many other great men like US Senator Stephen Douglas, Huey P. Long and of course James V. Forrestal.

Let's not forget that Senator Joe McCarthy also died in Bethesda Naval Hospital on May 2, 1957, at the ripe old age of 48. The official cause of his death was listed as acute hepatatis, an inflammation of the liver. He was then portrayed in the media as an alcoholic. Rumor has it that he was murdered on the occult date of May 1st but being the robust individual that he was did not succumb until the next morning, May 2. Remember that Carroll Quigley wrote that Joe McCarthy almost single handedly took down the entire criminal establishment in what was America's last stand.

When Forrestal was killed I was in high school and didn't know up from down of real politics. Yet, all of us "knew" that he had been murdered, not a suicide, because too many details didn't match as given in the media. In those last days of common sense when things didn't add up properly people simply said that they didn't add up properly. Government bull shit was hard to convince us of unless done on a gigantic scale, such as Pearl Harbor, because western people in general were still Christian oriented enough to not be able to believe anyone would commit crime on such a huge scale. I suppose that's where the term "the big lie" developed. We were kept VERY ignorant about our dysfunctional money creation, the biggest scale of materialistic lying criminality ever.