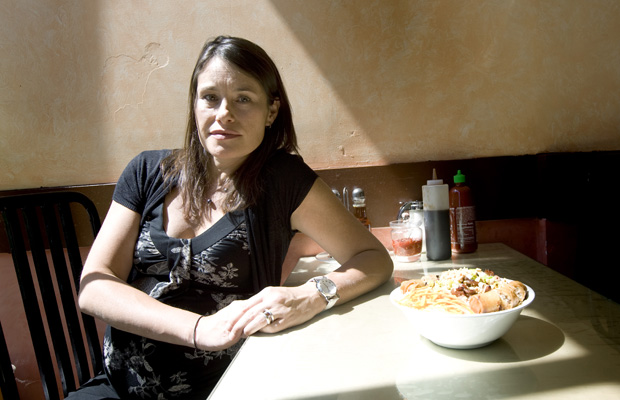 (left, Camilla Gibb, 46)
Canadian writer, Camilla Gibb tells her
"Jian Ghomeshi stories" without mentioning
she's a lesbian and former partner of Ghomeshi's
ex-boss at the CBC.
Lesbian and feminist activists continue to serve the
Illuminati (Masonic Jewish) agenda by poisoning
male-female relations.
by Henry Makow Ph.D.
I begin by stating that Jian Ghomeshi is a creep. It's apparent that his BDSM sex games were often not consensual.
I love that the face of CBC Radio -- a "cool" non-threatening minority male-- turned out to be a woman beater!
Ghomeshi has prompted every woman who has received unwanted male attention to cry "harassment" and "abuse."

In fact, the media promotes "coming forward" with these stories as a duty and act of courage.  However, there is no comparable campaign aimed at homosexuals who have been abused by other gays, or straight people who have been bullied by homosexuals. (Just as there is no mention of the MH-17 shootdown now that it is clear the Ukrainians did it.) 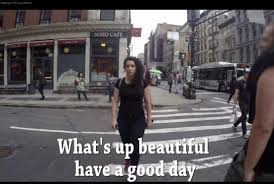 Heterosexuality is about men making bold overtures to win over women. This is what single women want. Naturally, man-hating lesbians and feminists will portray this as a pathology.  An example is Hannah Rosin's viral video of a big breasted Jewish woman, Shoshana "Roberts," fielding compliments from mostly uneducated men on a 10-hour walkabout in Manhattan.
At the Illuminati mouthpiece, the Huffington Compost, Michael Laxer, a Canadian socialist, has opined that Ghomeshi represents all men.

Clearly, the agenda is to discredit heterosexuality so more people like Camilla Gibb will become homosexuals. Gays generally have sex but not families. The Illuminati wants the government to eventually take over child breeding, as in Brave New World.

Camilla Gibb's article, "The Gian Ghomeshi Effect- I Plan to Speak Out Now"  may be an indication of what's in store. Women will be searching for every time a man offended them. Some of these grievances are legitimate but they refer to a small minority of men. The vast majority of men love women. Our natural instinct is to protect and nurture them.
Gibb, an English-born novelist, begins by confessing she has no "Jian Ghomeshi stories" of her own because at almost his age (47) he preferred younger ladies. She doesn't mention that she's a lesbian, and that might have figured.
"I can tell you I once watched him crowd a very pretty blond woman less than half [Ghomeshi's] age on the street after an awards ceremony. I watched her shrink backward, with some nervous embarrassment as he stepped into that bubble of personal space that keeps us at a comfortable distance from our non-intimates."
He was standing too close to her.
Then, thanks to "the Ghomeshi effect" Gibb tells us she reined in an inebriated male companion who was hitting on a waitress. "Whoa. Down boy, I eventually said. Back to your kennel."
Then Gibb relates some anecdotes that proves "the world is a lot nastier than we're really prepared to accept." 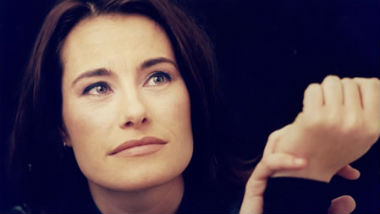 (Camilla Gibb as a younger woman.)
"He is older and established, you are not, so you say nothing to anyone when a teacher puts his tongue in your mouth, as happened to me, or calls you at home when he's masturbating, which also happened, or a photographer grinds the bulge in his pants into your thigh, which happened, too. Instead of saying anything, you change schools. You give up your nascent modelling career. Your choices become dictated and limited by fear."
"And those are just the incidents that happen behind closed doors. You don't tell anyone about the guy who sticks his penis through the fence at you in the schoolyard after hours when you are 7. You feel embarrassed and ashamed and utterly confused and you want so badly to erase it, but there it is in your head, an image still so clear 40 years later."
Then, she recalled the abuse she suffered on the streets of Cairo 25 years ago and the effect it had on her. She seems to think comparing North American men to Egyptians is relevant.
"If women are forced to contort themselves in this way in order to move through both public and private space, who do we become? Diminished and isolated in our own skin, isolated from each other and from the good men in our lives. Afraid not just to speak, but to be."
Obviously, obnoxious and unwelcome behavior by men or women is abhorrent. But there is a bigger agenda at work here.  Feminists and lesbians take the behavior of a small minority of men and exaggerate it. They pretend it is characteristic of all men. This is hate, the allowable PC kind. Feminist activists spread fear among women and division between the sexes. This is the age-old agenda of Cabalist (satanist) Jews and Freemasons as they establish their "new world order."
------

If you enlarge that photo of Gib at the table, you'll see another piece of information about her that seems to have fallen through the cracks. 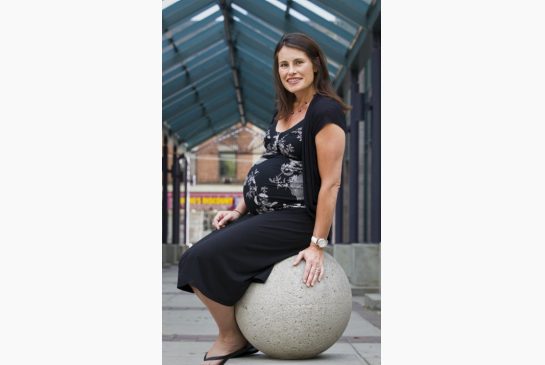 "But things have not unfolded according to plan. After Gibb finally became pregnant, and on the cusp of the dream of family life, her partner, the woman she has been with for nearly a decade,[presumably Heather Conway] abruptly ended the relationship. Gibb was confronted by the daunting and unanticipated prospect of single motherhood (she is due in less than two weeks).
A new scheme is in the works."--unquote --

So many schemes, so little time...    The photo was taken in 2010 for this article published by National Post on Aug. 19th, 2010.    But what happened next?   Both articles said she was due in two weeks.  Her Wikipedia bio says NOTHING about the pregnancy or what happened to baby.

I did find a short article she published in 2011 title "Memoir".  It recounted her "spouse" dumped her when she was 8 weeks pregnant. but never mentions that the "spouse" was a lesbian TV executive.   She bought a house, hired a live-in nanny - saying she could afford these things due to her "ex's financial settlement".  She has a baby girl, writes of breast feeding and the serene joys of single mothering.  The winds up the story with maudlin innuendo of falling in lust with the younger nanny, whom she was helping secure Canadian citizenship.  I nearly fell asleep waiting for her to come to her point, but there was no point.  As another 2010 article about her random pregnancy said, "Full speed ahead into the unknown".

What's the attraction? I don't understand why this woman is published.  Her article 'Jian Ghomeshi effect' is nothing more than using Ghomeshi's photo and name to draw attention to some emasculating remarks she said she quipped in a restaurant to some other effeminate skirt chaser.

I feel sorry for Camilla Gibb but don't extrapolate the behavior of a few deranged individuals onto all men in typical fashion. By the way if men have no manners as you said is simply because it doesn't pay in any way and women are as politicians, one shouldn't believe what they say, but what they do and ladies stop existing a long way ago so don't expect knights in shining armor. This comes from someone who used to defend women without self interest.

Each generation, throughout history, is dealt some test. One of the many, for men of the middle-late boomers generation, was to survive; overly large bell bottom pants, platform/high heeled shoes, blousy shirts with huge collars, flamboyantly large/colorful ties, too much fruity cologne, trendy disco clubs (many run or popularized by homosexuals), and rampant/state sponsored feminism - AND still somehow develop and maintain real masculinity...

No wonder it's taken so many men so long to finally find their authentic, inner and external male power! It's also clear why many others failed to do so. With time and experience, however, these various systematic attacks on masculinity are finally seen for what they truly are: A BIG JOKE - all damn silly and pathetic. Was then, and still is now.

I'm not a lesbian. I love men. I'm a Christian. I've been a traditional wife. I'm also a model
And I've had to put up with horrific sexual harassment from men all my life. Just a few examples:

A Dentist who tried to kiss me.

Men who try to kiss or touch me

I've found the majority of men have no manners --they feel entitled to act out on women. If there's a split second - no ones looking they go into ass hole mode. I think they particularly act out on attractive women as they resent they can't get one. I don't think these women are exaggerating.

No wonder women crack an go gay with the onslaught. But being beautiful I also attract gallant hero men who step up and defend me.

Getting into too many fights....

But unattractive women only get the downside

Men can't imagine what we women go through. My mother who graduated University of Chicago in 1959 told me the Male professors would tell her sex or I flunk you!

When I was young, I used to see children sitting at their desks and boy looks at girl, girl looks at boy. It was natural attraction. Men and women, at one time, were attracted to each other, naturally. Now days, the social engineers have craftily exchanged attraction for solicitation, where every personal interaction between a man and woman immediately becomes a business transaction to see who can talk who into what. That is not a successful way to start a relationship, but is the way the social engineers have laid out.

It is also insightful to realize that when you talk about "hating men", you are actually talking about hating everything. If a person hates one thing, that is just the target. The hate is for everything, perhaps even life itself, or for having even been born. My question to women is this: Do you enjoy one person speaking for all of you? Have you had enough yet?

Without exception, all leading feminists, today and in the past, were suffering from serious personality disorders, as is very clear from their depraved texts and actions.

Women who resent feminism (and they are many) fear these women and don't dare speak up.

Spineless beta males, who wrongly believe they have a better shot at the tunnel of love when 'empowering' women in (self)destructive behavior are a key cause of the success of feminism.

It is incredible that brainless young women are allowed to speak before adults and are given huge platforms by the media and then even get applauded by countless men!

Thankfully the tide is turning. But it's too little, too late. Our 'civilization' is doomed. The next round in the crunch is coming and the West, the US in particular, will be unrecognizable in ten years from now.

The main upside of this is that feminists, more than anybody else, will suffer the consequences. Useless human beings, who are clueless about how they can achieve a good place in life. Big Brother will no longer be around to bail them out in their insanity.

The women who, against all odds, have invested in their men, their families, will stand a much better chance in getting through the coming mayhem. Russian women (the Soviet Union was the most feminist state of them all) have learned this very hard lesson already and it will be even much worse for these maniacs in the US.

I pity these women, but it's clear that they need the lesson desperately.