NWO: Martial Law in the Soul 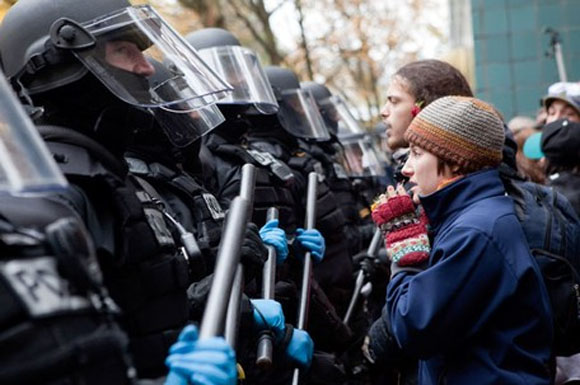 The New World Order is not
just a temporal empire.
It is a form of mental and
spiritual bondage: satanic possession.

"Humanity is being inducted into a satanic cult. The front lines of this war are not soldiers or police, but advertising, TV, music, pornography, movies, everything that degrades us and wastes our time."
by Henry Makow Ph.D.
When we think of the "New World Order," we imagine loss of freedom, martial law and dictatorship. This focus distracts us from the true spiritual character of the NWO.
The enemy is already within the gates.  We don't need to fear solders and guns as much as our own animal nature, our greed, vanity and lust, which the NWO does everything to foster.
Are we free? If not, what stands in our way, guns or our incessant desires?
The NWO uses our desires to enslave us. Our penury is spiritual. We are beggars always looking for the next handout, addicts craving the next hit. This is satanic possession.
"We aspire to corrupt in order to govern," said Giuseppe Mazzini.

The Protocols of Zion noted with satisfaction that the mood in the big cities was "cold and forlorn."
Humanity is being inducted into a satanic cult. The front lines of this war are not soldiers or police, but advertising, television, movies, music, pornography, everything that degrades us and wastes our time. Of course, there are some movies, TV and music that are exceptions, but they are becoming rarer.

I have a wealthy friend who drives a battered old car and lives in an apartment. I asked him why he continues to chase the buck.

He replied: "It's a way of keeping score. What else am I going to do?" Is he free?
Why are so many rich people are so stingy?  Because they feel poor.

I don't fear dictatorship or martial law. Too hard to maintain. It's far easier to let people enslave themselves.
EXPECT THE CHARADE TO CONTINUE
The Illuminati bankers control the corporations who control the politicians and the media. If we were serious about "freedom and democracy," central banks would be nationalized and the "national debt" renounced. Political campaigns would be publicly financed.
The Dept of Homeland Security and NSA are there to ensure this doesn't happen. They're not there to protect us from "terrorists." They protect the one per cent: the central bankers and the corporate empire they control.
Our focus should be on resisting the toxic influence of a society that is devolving into a satanic cult. For many, this will involve a reaffirmation of Christian or Muslim teachings and values. For others, it will involve studying Eckhart Tolle or seeking inspiration from soul expanding drugs.
The tyranny of the NWO is satanic possession. Whatever path we choose, resistance involves raising ourselves to the light.
It boils down to what we devote our days to: money or God. I equate God with spiritual ideals of bliss, love, truth, beauty, justice and peace.
----------------
Related-
Makow - The Illuminati's Secret Weapon: Sin
------ How's Your Inner Beggar?
The Pro Football Player Who Left a $37 million Contract to Become a Farmer

First Comment from John:
St. Augustine once said a man has as many masters as he has vices. This is a form of spiritual bondage.
The freedom Jesus spoke of to the Jews was not about an independence from Rome but a freedom from the bondage of sin that was ruling their hearts.
The ' Kingdom of Heaven' that Jesus revealed was, as he said. "within you". It could not be found in gold, lust, or the things of the world.
The Jews around the time of Rome were seditious rioters who thought that their salvation depended only on Israel as a sovereign nation. Jesus knew that this was not the answer to their problem. Just take a look at the sovereign nation of Israel today, do you need anymore proof?
-------
Related- The US is 105th Happiest Country in the World

Comments for "NWO: Martial Law in the Soul "

I really enjoyed your latest article on the NWO and Martial Law. I especially enjoyed the comments from people I felt were INDIVIDUALS with their own unique minds. That is refreshing. I feel many of your readers, like you, are INDIVIDUALS and design their own unique and more free life. The great scientist Carl Sagan revealed as did many others that the moon is artificial. When I feel the energy of the moon I feel it is simply a device that "anchors the game" for a billion years or so. The "game" is simply that we are exposed to all kinds of deception and manipulation to then one day wake up as INDIVIDUALS and to be free. I feel the key too is to pop out of ones culture or religion or programming, develop SKILLS as Neo mentioned and to be as free as possible. Life will never be PERFECT but it can get better and better... Have a BIG VISION and then go for it...

"I think what most people, particularly young people, need is to learn a trade..."

Yes, a thousand times yes. I do computer work for an auto repair shop; they keep my car running. It's pure barter: No money changes hands, no taxes are collected.

Learn to do something that people need. Being able to fix vehicles and appliances, for instance. Teaching a musical instrument. Carpentry. Lawn care and gardening. Bounty from a garden can function as currency.

Going tens of thousands of dollars in debt for a college degree is a fool's game, especially considering the job market today (and for the foreseeable future!)

I think the big trick is to actually deal with people in our day-to-day lives without empathizing with them to the point of lowering your mental guard and be influenced. ´Cause most people are just gone, wasted, gave up their minds and souls a long time ago, if they ever even try to hold on to it.

I think the most perfect (and annoying to the system) way to resist is to cling to what you recognize instinctively as true. Because New Age, Christianism, Buddhism, Islamism and all the rest were invented by the enemies.

Why would you subscribe to it? I'm not a Christian, nor Muslim, and personally consider Tolle a clown (after reading his books - Power of Now, etc - for you can only despise something you know). There is some truth in all of it, even in Judaism, mixed with bullshit. The key is empathy. You must never allow THEM to tell YOU what to sympathize with, what "oppressed" little victim you should manifest for, what beautiful causes to get involved in.

Today every 12 year-old twerp wants to save mankind, end discrimination, "make a better world", yada-yada. Maintain YOUR empathy YOURS. Empathy-hijacking is the essence of Judaism, which is the front culture of the system.

Jesus said, "if they have persecuted me they will persecute you." The "they," were and are the lost sheep of Isreal,the Synagogue of Satan.

St. Paul's letter to the Thessalonians was even more specific and I paraphrase: they killed the prophets, the Lord Jesus, persecute us, forbidding us to speak, please not God and his wrath has come upon them unto the END.

These words are a consequence according to St. Augustine, of the sin sick Jews murdering the divine physician and calling down, as a prayer, his blood that day on themselves and their children.

Yet, in Romans St. Paul clearly writes, a second call will go out towards the end of time and remnant of Jews will recognize Jesus Christ as their long awaited Messiah, very shortly afterwards time will be no more.

I have to schmooze you a bit by mentioning that you have a way of addressing sides to this whole conflict that most of the other writers miss or don't want to tackle. I've been reading your stuff for years. Good job.

When I realized the truth about 9/11 I went into a frenzy of research and discovered the bankers. After that, how shall I put this, some of us adopted the three rules: Don't pay taxes, don't use credit (interest bearing) and don't buy insurance. Tough rules to live by in the current system but if everyone did it...

I think what most people, particularly young people, need is to learn a trade. Every day I hear about jobs this and jobs that. It's better to learn a trade so that one can make their own way in the world and not be dependent on the system providing one with a job.

That's what has saved me, provided me with the freedom to do and, most importantly, think what I want. Many people have no trade and after they are in a job for a while they become desperate not to lose it because it's all they know. Learn a trade that you can do on your own if necessary.

It is really not a New World Order. It is an Old World Order that Jesus came to destroy (the works of Satan) with his teachings and his sacrifice.

Fortunately, no one has to wait for or be involved in any organization whether religious or governmental to conquer the Old/New World Order. It is an individual decision to accept God and practice the teachings of Jesus that sets anyone free.

Yet another wonderful posting Henry, thank you.

I spend no time enveloping the MSM media of today, aside from the random episode of "Law and Order" at dinner. I know nothing of the celebrities of today, being 44yo, they're not important to my life.

Yes, the enemy is within our gates. But I will not be enslaved, as I serve GOD by being the best person, that my parents created.

Thank you for highlighting the forces that are aligned against our healthy spiritual development. Basically the message is that whilst you are economically and politically enslaved your Masters allow you to corrupt yourselves socially/spiritually. This ensures that they have debauched drones to manage their corporations and legislatures. I find solace in the space Islam provides and here is a video explaining the enslavement in this world that human beings are up against from our perspective.

People are not free in this country at least. They are trapped by their 401K plans and being slaves to their employers for a variety of reasons. I'm more free now as a poor person then I've ever been in my life. I don't want enemies, but I have enemies due to their ignorance:

"The Matrix is a system, Neo. That system is our enemy. But when you're inside, you look around, what do you see? Businessmen, teachers, lawyers, carpenters. The very minds of the people we are trying to save. But until we do, these people are still a part of that system and that makes them our enemy. You have to understand, most of these people are not ready to be unplugged. And many of them are so inured, so hopelessly dependent on the system, that they will fight to protect it."--- Morpheus, from the movie, 'The Matrix'