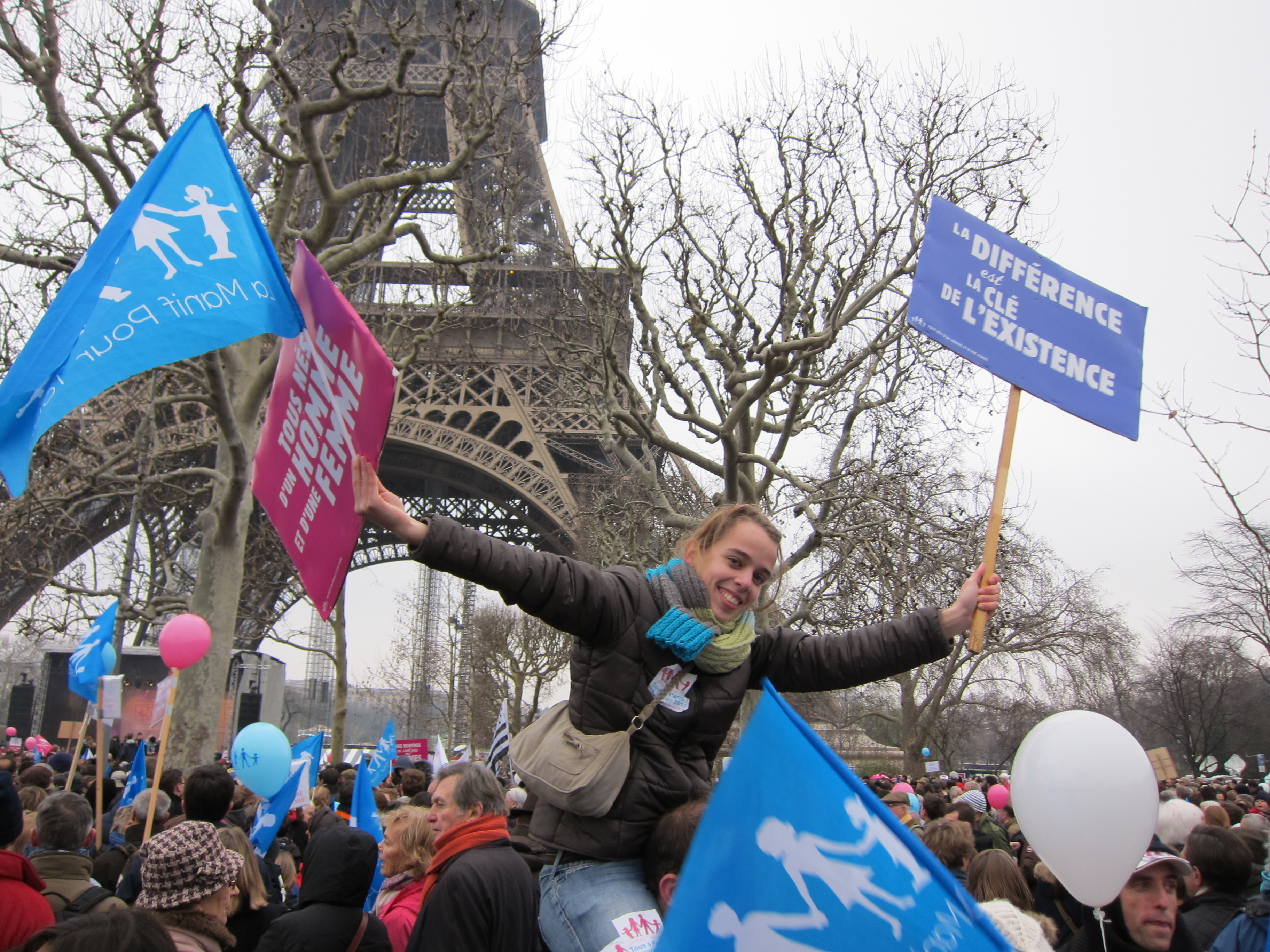 and "Difference is the key to existence."  Crowds numbering 340,000 descended on the Eiffel Tower

on January 13th, to oppose a law legalizing gay marriage, which came into effect in June.

continues to remold humanity in the shape

of a satanic cult, popular resistance is increasing.

The Divine spirit in man will resist satanic possession.

Publication of Real Women of Canada

The public is expected to... obediently accept edicts on moral issues ...without complaint or dissent. The powerful elites ... have failed to understand one important characteristic about mankind...the power of the human spirit.

We are witnessing this human spirit in many areas of the globe..

â€¢ The socialist French president, FrancÌ§ois Hollande, who passed a same-sex marriage law in May 2013 and intends to pass other anti-family policies, such as surrogacy and gender identity has met enormous resistance from the French public. This is astonishing in secular France. An organization, called "La Manif Pour Tous" (Demonstration For All),has held seven massive demonstrations on the Paris streets and elsewhere. It is comprised of families rising up against President Hollande and his cabinet.

Protesters wear sweatshirts with a distinctive logo: a childlike drawing of a father, mother and a boy and a girl.The logo has become a rallying sign all over France. The demonstrators hope to overturn the same- sex marriage legislation after the 2017 election. Meanwhile, former president Nicholas Sarkozy blames Mr. Hollande for this national divide over the government's decision to legalize same-sex marriage. He stated that the question of same-sex marriage should be put to a referendum as it is an issue that concerns the moral fabric of society.

â€¢ The Italian Parliament has proposed a law prohibiting "homophobia". The Italian public believe the law is a re-emergence of fascism, ordering people how to think. Groups of citizens who call themselves the "Sentinels" (Sentinelle in Piedi) stand quietly each week with their signs in major Italian cities, Turin, Rome, Bologna, Genoa, Rovereto, Aosta, etc.. This defiance has enraged homosexual activists, communists and anarchists who have hurled verbal abuse at the Sentinel demonstrations. The Sentinels are a non-partisan, non-denominational organization, "a citizen's resistance method". The issue is freedom of expression and the right of children to be raised in a family with a "mum and a dad". The Sentinels "watch over society" and "denounce every occasion in which [attempts are made] to destroy mankind and civilization".

This has led to a revolt in the Conservative Party with supporters leaving riding associations in droves, leaving fewer than 100,000 members in the party. In October 2014, when a former Conservative MP won a seat for the United Kingdom Independent Party (UKIP), displaying a huge swing by voters. He won by over 12,000 votes or 60% of the votes.  Other Conservative MP's are considering switching over to the UKIP. A general election will be held May 2015, and the centuries old left/right political divide in the UK has broken down. 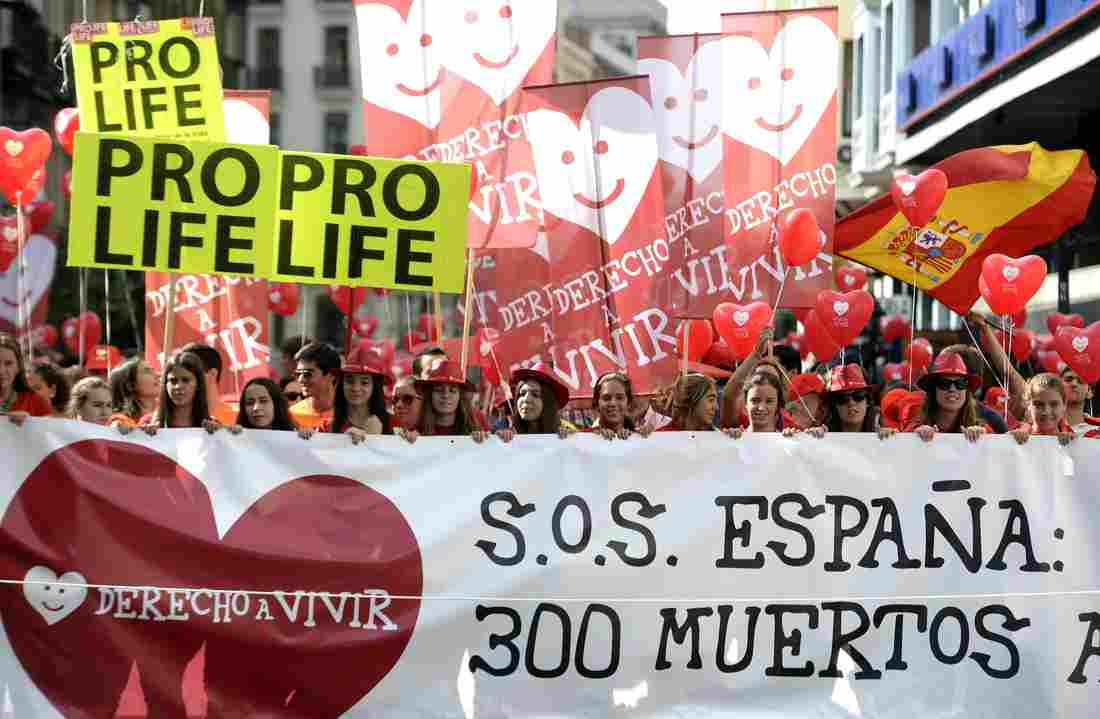 â€¢ Prior to the 2011 national election in Spain, one million protesters took to the Madrid streets, demanding that the abortion law, brought in under the previous Socialist Government, allowing abortions up to 16 weeks, be repealed. Mariano Rajoy won the election and promised to restrict abortions to only cases of rape or serious health risks.

However, in September 2014, Prime Minister Rajoy scrapped his proposed abortion legislation, claiming there was no consensus for it. The Minister of Justice, who drafted the legislation, resigned in protest.

Back to the streets for pro-life family supporters in October! They claimed "election fraud". Only 48 hours previously, these same individuals had demonstrated in support of a new abortion law protecting the unborn. Spain is now in turmoil over the issue of abortion.

â€¢ On October 8, 2014 the US Supreme Court caused enormous controversy when it decided not to hear the appeals from several states in which judges had ordered the overturning of legislation that had defined marriage as a union of a man and a woman. By refusing to hear these appeals, the Supreme Court judges allowed all the lower courts' decisions to stand, thereby bringing the number of states that provide same-sex marriage to over 30. In only six states was same-sex marriage chosen by the voters through the democratic process - all the others have occurred by judicial activism.  This is occurring even though a September 2014 PEW poll indicates that support for same-sex "marriage" has fallen by eight points since 2010, from 49% to 41%.

By refusing to hear these cases, the Supreme Court has done the very thing it may have been trying to avoid -creating a political maelstrom.... It will take time, but a huge backlash will eventually develop. Already we can hear the distant rumble of a tidal wave ...Oklahoma Governor, Mary Fallin, calls for civil disobedience and Senator Ted Cruz of Texas is demanding a constitutional amendment to protect marriage. One thing we all know: despite all the tools at the disposal of the government, courts, media and homosexual activists, they will eventually lose because they cannot extinguish the indomitable human spirit.

Related- Illuminati imposition of homosexuality on society only increases homophobia

I wanted to add a point which is seldom made in relation to what I call permissive policies.

We are quite agreed that free masonry has had a heavy involvement in the same-sex marriage laws. This is especially true in France where masonry has been hard at work to undermine the foundations of our society since 1789. In 1905, they sponsored (or more precisely wrote) the law on separation of church and state.

But there is another fundamental element to this which is almost always overlooked in anglo-saxon countries. As early as 1969 French philosopher Michel Clouscard identified the "society of desire" as a new element of capitalism. In essence, the fake revolution in May 1968 introduced permissiveness in French society (other countries experienced the same phenomenon at this time too). This was presented as a positive evolution over the previous period during which sex was repressed. The left wingers have championed free sex and permissiveness ever since. So we could be forgiven to think this is is exclusively a left-wing theme. It's not.

This is equally a right-wing (Capitalist) theme. It is all about the extension of the market. Before, the market was purely a market of physical products. Of course, such a market still exists and it is far vaster than it was then. But the market was extended to "services" which should never have been mercantilized: abortion, pornography and today the purchase of babies by rich westerners from poor women in the South. This is further extended by the introduction of surrogacy in countries where it would have been unthinkable even a few years ago and also medically assisted procreation (for lesbian women to have children). We have essentially mercantilized elements of human activity which up until now where totally private and outside the market (human love, the love of a mother for her child,...).

In France we have a member of the elite who has been particularly visible during the gay marriage charade. His name is Pierre BergÃ©, left. He was the long term boyfriend of Yves St Laurent. He is also extremely wealthy and part-owns the French daily "Le Monde". On prime time TV, he said and I quote "Labourers and factory workers rent out their arms and hands to factory bosses, so it's quite right that women should be allowed to rent out their wombs".

Perhaps you have noticed this detestable facet of human behavior: the left wing is the best proponent of untrammeled capitalism. They are far better at it than the right wingers, and they do it of course under left cover.

I thought you might appreciate a non-Anglo-Saxon perspective to this.

Comments for "Resistance to Judeo Masonic Agenda is Growing "

As I am glad to see more people become more aware of the unilluminated of this world I feel like there was a huge misunderstanding. People should not be protesting gay marriage as much as they should protesting government sanctioned marriage to begin with. Marriage used to be a pyramid with husband, wife and God at the top but with advent of marriage licenses, it became husband, wife, state. Ask yourself who gave the state the right to arbitrate who gets what in the event of a divorce? Well we did, when we got the license in the first place. We did not gain rights when we got the license, we have up rights. The only person we need to focus on for our rights is God not the state.

Henry let me just add that a good video to get the idea on Pierre Berge is to check out pictures of a book made by his lover Yves Saint Laurent in the seventies i think named : La Vilaine Lulu (the bad lulu).

1. The satanic elites have not "failed to understand the power of the human spirit" at all. That is exactly the power they know they must destroy, if they can. It's the whole purpose of exactly the things they are doing.

2. In the U.S. only a tiny percent of the people will protest. Most take every affront in silence so long as they have their sports, their inane TV, gas in the car, and enough money in the pocket to be somewhat comfortable. In fact, thanks to the extremely successful government schools, most are so dull they don't even understand these things are affronts to themselves.

Their mantra is a sort of very lazy "live and let live so long as you leave me alone." Until it's too late they continue to wishfully believe they are being left alone. If you mention already staffed FEMA concentration camps, etc. for those who won't comply they laugh at your ignorant belief in "conspiracy theories" and go back to the TV.

If you notice here, these "degeneration of mankind" laws have not been successfully judicially activated in Orthodox Christian Russia or Hindu India. Even the atheist run government of China knows better.

Name me one mainstream Orthodox Jewish rabbi or one mainstream American Christian priest or pastor that is publicly taking a stand for God and mankind against this issue of "gay marriage"? And, they won't, because the wrath of the MSM would be far too much to endure.

Fortunately for America, God does not judge the nations by it's leaders alone. He judges by the people of those nations. The LGBT advocates and it's participants are still less than 1% of the population. Those are the REAL numbers.

As witnessed by this article, the true Church is still alive in the Christian West. The American public may show some lip service or recognition to these freaks for now but privately they are laughing behind their backs. It's always been the individuals right to be as perverted as he or she desires to be but honor and respect for these kind of people never has or cannot be successfully legislated into the hearts of public.