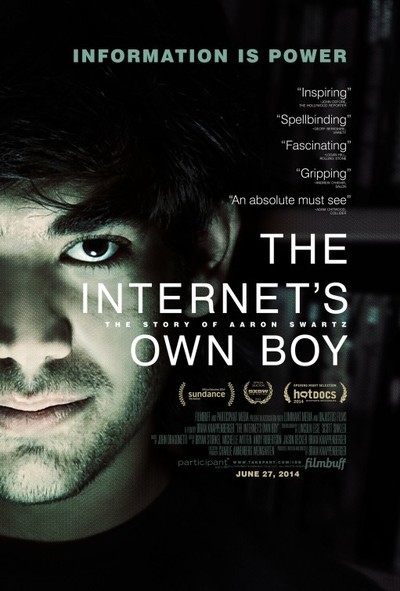 Must-see documentary tells the story
of charismatic champion of freedom.


Unjust laws exist;
shall we be content to obey them,
or shall we endeavor to amend them
and obey them until we have succeeded,
or shall we transgress them at once?
--Henry David Thoreau


A reader, Mary Lynn, tipped me to a documentary The Internet's Own Boy, (2014) written and directed by Brian Knappenberger, and released last summer, 17 months after Aaron's suicide Jan 11, 2013.

For some mysterious reason, this wonderful two-hour documentary did not get the media hype or word of mouth it deserved, and bombed in theatrical release. It is now available for free on YouTube which perhaps is appropriate given Aaron's work and its Kickstarter funding.

Aaron's  suicide at the age of 26 was a tragic mistake.  Many people believe he was murdered but that is true only in an indirect sense. The film makes it clear that he was a highly-strung young genius who was depressed by criminal charges against him.

Swartz easily could have turned his trial into a cause celebre and used it to advance the cause. He had already helped engineer an unprecedented nation-wide outcry that stopped a bill restricting Internet freedom. He could easily have done the same for himself. His Internet freedom lobby, Demand Progress.org, had 1.5 million members. His supporters were Obama voters, and ultimately, the President would have had to intervene with the Dept. of Justice.

Swartz got mired in a legal morass. He was spending millions on his legal defence. He should have dismissed his lawyers and stood on principle.

The principle was freedom of information. He had committed an act of civil disobedience. He believed that knowledge funded by the public should not be sold for profit by private corporations. He had downloaded millions of scholarly publications from the JSTOR archives at MIT, which he had intended to release for free.

He was charged with computer crime punishable by 30 years in prison and a million dollar fine. The government, led by prosecutor Stephen Heymann, wanted to make an example of him as a deterrent. This was a time when Wikileaks and Bradley Manning were in the news. Information had to be protected.

Swartz had thrown down the gauntlet in his "Guerrilla Open Access Manifesto."  Information is power. Mankind's scholarly knowledge should not be controlled by private corporations for profit. "There is no justice in following unjust laws. It's time to come into the light and, in the grand tradition of civil disobedience, declare our opposition to this private theft of public culture."

The documentary was made with the cooperation of the Swartz  family and includes interviews with his parents, brothers, girlfriends and colleagues. Perhaps the most heartwarming aspect of the film are the home movies of Aaron as a child and teenage prodigy. When Internet experts demanded to know why this brilliant forum interlocutor didn't show up at events, Aaron had to confess his mother wouldn't let him. He was only 14!

The documentary is also notable as a portrait of true Jewish idealism, the genuine desire to make the world a better place that has been perverted and exploited by the Illuminati bankers.  It's ironic that people so smart and decent also can be so easily duped (i.e. Communism, liberalism, feminism, homosexuality.)

And that also applies to Aaron's fate. He had demonstrated the power of the Internet to rouse millions of people to a political cause. Yet he failed to use this power to save himself.

Everyone in the truth movement should see the internet tribute to Aaron Swartz, entitled The Internet's Own Boy.  That boy was a hero, and heroes don't come our way often in this life.  I was touched to see how he could just never be happy or satisfied in the narrow constraints of earthly education, even in its supposedly finest institutions.  He knew there was more, he knew there was better, and he knew he could access it, and then share it with everyone else!  It was in his heart to share truth and knowledge with every other seeker, and to make it available to all.
What is our life but information?  Aaron was all about making information, the truth that sets us free, available to all, without charge.  He was a visionary and perhaps way too idealistic for this world, but, wasn't Our Lord, another fine young Jewish man hounded and harassed by the establishment of His day, also a visionary and an idealist?  Both thought that idealism was possible and attainable, even is such a fallen world as ours has been, particularly in the last century, which some wag recently characterized as a huge mistake!
Our job is simply to continue on in the path they laid out for us, and that we will do.
Before I got the truth from the likes of Henry Makow, Des Griffin, Michael Collins Piper, Ed Hendrie, other visionaries and truth tellers, I was stuck in the establishment's religion and the establishment's veiled sense of history--and stuck there for forty-six years.  The truth, available to me only over the internet, because the churches, the universities, the media and the book publishers were all bulwarks and founts of the establishment's narrow and confined mind set, set me free to know the truth!  And it was to be found ONLY on the internet and via the brave men and women who posted it there.
Thank God for the Internet and those who have lived and died to keep it free!
Aaron was all about letting the truth about EVERYTHING be set free, from dark cloisters and the dark hallways of power, lies, greed and deception.  He saw a new world coming, and it is ours, if we continue to fight for it, stand for it, and speak for it.  If anyone exemplified, understood, and lived out the Constitution and the rights it enabled us to have, it was this young man and his colleagues who fought to keep the internet free and viable for us all.
Let us not forget him.  In seeing this documentary, we can see his father, his brothers, and his friends, and see the love and honor and respect they all held for this exceptional young man.  For those of us who've never had the privilege of meeting or knowing Jewish Americans in our lifetimes, it is perhaps a chance to see the best of them, and the amazing love and humility and kindness that seems to pervade their lives and can even be seen shining preciously from their faces.
God bless Aaron Swartz and his family and loved ones, forever.....

Comments for "Internet Martyr Aaron Swartz is Immortalized in Film"

look at the poster for the film - Aaron with only one eye showing. now you know who was behind it.

I agree with Susan: one eye symbolism, how obvious.

The "illuminati" flop films all the time, this is not "proof" that the movie tells the truth. Satanists use reverse psychology all the time: they invented it.

It has since occurred to me that perhaps the purpose of the film was to cover up the fact that Swartz DIDN'T commit suicide, but was murdered. Perhaps he did plan to fight in court and the government feared the case would become a cause celebre. Thanks Susan and Kristine.

Richard Evans’ February 24, 2014 essay, Let’s Recognize Aaron Swartz’s Martyrdom, is more persuasive on the issue of whether Aaron committed suicide or was “suicided.”

Aaron was murdered, because the quiet elite could not risk Aaron Swartz’s acquittal.

Lord Bertrand Russell described the New World Order in which the 'white coat priesthood' would be Plato's Guardian class:

"On those rare occasions when a boy or girl who has passed the age at which it is usual to determine social status shows such marked ability as to seem the intellectual equal of the rulers, a difficult situation will arise, requiring serious consideration. If the youth is content to abandon his previous associates and to throw in his lot wholeheartedly with the rulers, he may, after suitable tests, be promoted, but if he shows any regrettable solidarity with his previous associates, the rulers will reluctantly conclude that there is nothing to be done with him except to send him to the lethal chamber before his ill-disciplined intelligence has had time to spread revolt. This will be a painful duty to the rulers, but I think they will not shrink from performing it." The Scientific Outlook, Chapter XV, 'Education in a Scientific Society'

Aaron Swartz was one of those "rare occasions" that Lord Russell and "the rulers" dread. He was supposed to become distracted by the wealth his innovations gained and forget about the "cultural heritage of centuries" and everybody else. He was supposed to "abandon his previous associates and to throw in his lot wholeheartedly with the rulers". He didn't. He found his calling in organizing the first real grass roots campaign to defeat a "must be" bill on Capitol Hill. That wasn’t supposed to happen.

Luke 8:17: "For there is nothing hidden that will not be disclosed, and nothing concealed that will not be known or brought out into the open." In these days of the Internet, this prediction, promise, is being realized. Even the savage mistreatment of Aaron Swartz operates as a revelation of the depraved character of people at the highest levels of society.

Aaron Swartz was charismatic and intelligent.
Combined with his knowledge of technology he could potentially roadblock any freedom reduction measures of the elite. A recent case being calls to do away with the privacy network "Tor" on the basis it "80% harbors terrorists and pedophiles".

It being dead easy for spooks to fake suicide, I would not have used the term suicide so absolutely in the article. Apparent suicide or
"suicide" are much more likely.