Cohen has always maintained a highly controlled public persona. So why does he make Masonic hand signs and use Illuminati symbols? The fingers parted is an occult Jewish sign.

Baby boomers looked to artists like Leonard Cohen
for inspiration and guidance. Turns out
he was another Illuminati shill, like many artists today.
Ann Diamond, who knew him personally, suggests
that Cohen's role was more than just satanic
cultural subversion.


Music is programming - this we know.The Baby Boomers were programmed by Rock to 'accept the unacceptable' - first sex, drugs, rock and roll, then murder. British intelligence set up the EMI recording label in the 1950s with help and approval from Lord Rothschild and his Tavistock Institute whose aim was to remould the thinking of the post-war generation.

The programming got heavier in 1966 when Paul McCartney allegedly died in a car crash and was replaced by a double, Phil Akrill.

With Leonard Cohen, a sixties' dark horse who 'always hated the sixties', it  went deeper. Not just another pretty face, Cohen was an elite product of McGill and Columbia University's ultra-classified MKULTRA mind control projects. Adept at hypnosis and trained as a Manchurian Candidate, Cohen met Jacob Rothschild in London in 1959.

Jacob was the son of Lord Victor Rothschild, (1910-1990) who allegedly controlled MI5 and MI6 and also had founded the Tavistock Institute, birthplace of MKULTRA mind control. At the same time, Cohen cultivated friendships in the London underground scene, including Black Power activist Michael X, who worked as an enforcer for slum landlord and alleged Israeli spy, Peter Rachman. 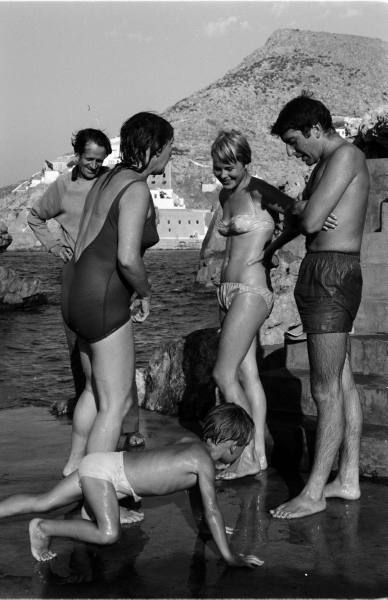 (left, Cohen and "So Long Marianne" & her child on Hydra)

From London he headed for Hydra, - an island with deep cult connections, and a haven for operatives. On arriving, he looked up Barbara Huchinson, ex-wife of Victor Rothschild who was living with a Greek painter, Nikos Ghikas. Soon afterwards, the Ghikas mansion was totally gutted in a fire. An auspicious beginning to a year in which the still-unpublished novelist was photographed with other Hydra Bohemians for LIFE magazine: a major coup for an unpublished novelist and folksinger who had not yet written any songs.

In the spring of 1961, he just happened to arrive in Havana a few days ahead of the Bay of Pigs invasion nearly causing an international incident when Castro 's troops arrested him as a suspected CIA agent.

He has an impressive record of appearing in distant locations just ahead of historic coups: Greece before the Colonels. London for Jimi Hendrix's death. Montreal on the eve of the War Measures Act. Israel just days before the Yom Kippur War broke out in a "surprise attack" by Egypt (September 1973). Asmara, Ethiopia for the CIA and Mossad-backed overthrow of Haile Selassie. Manhattan, when John Lennon died (December 1980).

Rothschild's Tavistock Institute was about programming the post-war generation through psychiatry.

Out of this huge classified program of British domestic warfare came the Beatles and the whole 'British invasion' that was sold to impressionable teens around the world.

By the late sixties, music was boldly pushing sex, drugs and rock and roll and fomenting aimless rebellion. By the late seventies, most of the really talented figures in rock were dead. Songs played backwards revealed 'Satanic' messages, not surprising since the intelligence agencies had a long history of Satanism going back to John Dee and Elizabethan times. Dionysian decadence overcame 'Peace and Love" 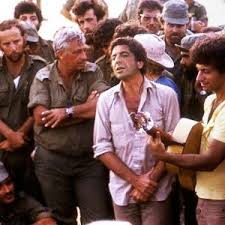 By 1980, John Lennon was Out. Ronald Reagan and War were In. It was time to introduce Deeper Programming. Apart from his skills as a hypnotist, he had acquired weapons training over a decade after leaving Montreal for London and Hydra.  He even described his MK-ULTRA background in a song:

Field Commander Cohen was our most important spy
Wounded in the line of duty
Parachuting acid into diplomatic cocktail parties.

By the eighties Cohen was penning songs filled End Times programming scripts and triggers. His small cult audience had privileged access to the 'secret text' that now entailed divine punishment for the generation that had embraced sex, drugs and rock and roll.

Increasingly his songs resembled predictive programming for mass destruction, darkness and the Flood. Introducing the NWO religion to western audiences, Cohen's music draws on Freemasonry, Kabbalah, and Babylonian mystery cults which he tastefully markets to his sophisticated fan base of baby boomers and their kids. 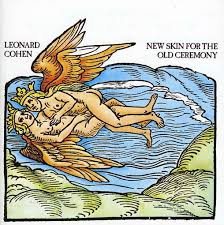 He favours alchemical images, symbols and logos. His album New Skin for the Old Ceremony made use of a drawing of the hieros gamos, depicting the union of male and female from a 16th century woodcutting. The hieros gamos may not be as innocent as it sounds: depicted in the climactic scene of Eyes Wide Shut, it involves a deadly ritual in which a woman is murdered at an Illuminati party.

For a while Cohen toyed with swastika inside a Star of David, but it was already taken by the Raelian UFO cult. Another of his logos is the hummingbird, representing subliminal programming as songs enter the listener's ear the way these birds dart from flower to flower.


THE NINETIES AND AFTER

His 1992 album The Future features a hummingbird rising up from a black and blue heart (reptilian blue bloodlines?) which seems to hover above a pair of (open) handcuffs symbolic of "freedom" in the New World Order. The title song introduced another apocalyptic slogan: "I've seen the future, baby, it is murder."

The logo (above): two hearts intertwined like the triangles of the Star of David appeared on his final ("Old Ideas") tour launched in Ghent, Belgium on 8/12/2012 to coincide with the closing ceremony of the London Olympics. Strangely, the date mirrors John Lennon's assassination. For the occasion Cohen even added an all-seeing eye.

On stage in Ghent with his musicians dressed like Lubavitchers at a funeral, the spry 77-year-old delivered exactly 33 songs - a nice, round, Masonic number -- including "Save the Last Dance for Me."

In an astrological display of fireworks , the Star of David constellation   that began on July 29 2013, climaxed on September 21-- Leonard Cohen's 79th birthday.

Was this his date with destiny, a heavenly sign that he was the longed-for Jewish Messiah - or was he the flip side, back-masked version, aka anti-Christ?

The fateful day went by and nothing happened.

Maybe once again he fooled us all.
---
Ann Diamond's book about her relationship with Cohen is called  The Man Next Door
http://www.lulu.com/shop/ann-diamond/the-man-next-door/paperback/product-21758892.html

The hummingbird and handcuffs on  the album jacket of 'The Future' always made me think of this passage from the novel 'Cockpit'  by another mysterious fellow, Jerzy Kosinski.

"I was one of the specially trained groups of agents called "the hummingbirds". The men and women of this group are so valuable that to protect their covers no central file is kept on them and their identities are seldom divulged to other agents. Most hummingbirds remain on assignment as long as they lead active cover lives, usually as high-ranking government officials, military or cultural officials based in foreign countries. Others serve as businessmen, scientists, editors, writers and artists. But I always used to wonder what would happen if a hummingbird vanished, leaving no proof..."

also can't help but notice parallels with the mysterious Bob Dylan's visual cues over the years...

Ann replies: Dan has cracked the hummingbird code and Kosinski certainly describes Cohen to a T.  (Kosinski used to hang out in a club for black transvestites in New York, according to a friend of mine. The Painted Bird is said to be a fabricated holocaust memoir of a young Jewish boy's travels across eastern Europe just after the war, in which he encounters nothing but cruelty and brutality,)

How can Cohen's supposedly sophisticated fans overlook the evidence of his cozy connection to families like the Rothschilds, Windsors, and  even the corrupt money-laundering Spanish royals? Loveable and charming though his public persona may be, why has no one held him to account for these obvious slips and semi-confessions which have leaked out over the years?

His friend at 1heckofaguy.com just posted photos of our hero naked and taking a shower in a 'locker room' in Nashville in 1972. Health club? Or training camp? He looks like a personification of Death --

It's much easier with Mr. Cohen:

According to Rothschilds own biography "Prophets of Money, chapter: a royal Caucasian family" it is said that they are really proud of having married into THE Cohen family. Who are THE Cohen versus the masses of ordinary Cohens? THE Cohens can trace their ancestry back to Babylon!!! There is refrain of a Cohen song: and I belong at last to Babylon....

A jewish classmate of Cohen confirms his membership to a very old family line. So he met Jacob R. at a family gathering.
Also his book: Favorite game: he belongs to an old anglo-saxon family who does not mix their bloodlines since a long time....

The Field Commander Cohen song can be taken 1:1! Other songs too. Check out the documentary of Cohen on tour in 1972 with his lawyer Marty Machat ( also lawyer of Phil Spector long before) and the Canadian documentary (also 1972) about Imanuel Velikovsky being interviewed by Cohen at the very end of the film. Busy year for good old Leonard Cohen! They made him take off!

So far for now. Don't dwell too much in the "Illuminati stuff". No sense of humor!

The story of Victor Rothschild would make a great "conspiracy cartoon". On top: Charlie Parker died in his sisters hotel suite. Their relative managed the Rolling Stones for decades. And so on....

It does pile up, I have to admit.