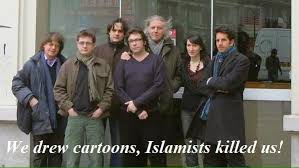 (Spinning this false flag as an attack on our "liberties"- while in fact an excuse to remove them.)

Divide and Conquer
A French writer sees the Charlie Hebdo shooting
for what it is, a ploy to mobilize Christians against Muslims.
The Illuminati Jewish banking cartel is responsible for the influx
of Muslim immigrants into Europe and then they stir up friction.
Below is an example of real "free speech" which they'd like to suppress.

"This is a false flag of the worst kind. A false flag perpetrated by Mossad agents who will be without a doubt extricated to Israel or probably killed. In any case, it's for certain that the police will never catch them alive, so people will never know who planned that mass murder."


There we have it, an attack to mobilize France to the Jewish cause, to make people indignant and for the media to blow on the embers. This attack strikes at the heart of the Jewish supremacist satirical organ, Charlie Hebdo.

What a woe! What horror! We live in such satanic times. Terror attacks just have to multiply so the powers that be can take extreme liberty-killing measures, all with people's shocked consent. It's sewn with invisible thread. It's so obvious that anybody a little bit aware can't but fall into the trap.

This is a false flag of the worst kind. A false flag perpetrated by Mossad agents who will be without a doubt extricated to Israel or probably killed. In any case, it's for certain that the police will never catch them alive, so people will never know who planned that mass murder. They will only know what the powers that be (the supremacist power) want them to know. Be prepared for an assault of Zionist's propaganda at national level. France was waiting for her 9/11, she now has it at last...

Don't forget they've been preparing this in spirit for weeks. Since the attack on the Jewish museum of Brussels, the burglary at a Jewish house, and the disgraceful rantings of the Jew Eric Zemmour, and so to Charlie Hebdo, the satirical hero at the hands of the Jewish supremacist power, housed in Rothschild premises. In other words, those cartoonists were inside the wolf's lair and did not survive. Peace to their souls.

Come on. It's so easy, so obvious that it can't be otherwise. We know full well that the supremacists' people of Israel need to eradicate religions to impose his own. Catholicism was perverted par Protestantism and terminated by the Anglo-Saxon masonic secularism. Islam will be aligned with terrorism to justify his death warrant.

We will wait for news to understand until where they wish to go. [Francois] Hollande called for "national unity", but for which nation? France? No, I don't think so. We're going to be rushed into a deadly and bloody struggle between Jews and Arabs. We are going to be in the front line to defend freedom of speech (of Jews), to impose liberty (of Jews), and by doing so to favor the takeover of our country by those Jewish supremacists ready to all extend for just that.

An attack was then needed for the power to move with people's ascent even virtually... We are engaged in dark times for those aspiring to freedom, to true liberty, the one who allow you to live with dignity and with fraternity with other people on this planet.

This Jewish supremacist power condemns us at war, at terror, at crime of the worst kind, just to impose their eternal dominion on the goyim. They are not very far from it, not very far at all...

Henry, it is all hypocritical - the talk about freedom of speech. Simon Shepard and Steven Whittle of the Heretical Press were prosecuted for cartoons about the Holocaust and fled to America 'the land of the free and the home of the brave' where they were held in custody before eventually being deported back to Britain and imprisoned. Many Revisionists have suffered likewise in other Western Countries.

It is free speech to offend Muslims by poking fun at Mohammed but a hate crime to poke fun at the Holocaust. It is a truism that if you want to know who rules it is just a question of asking who you cannot offend. In Soviet Russia it was Stalin in Nazi Germany it was Hitler and in the West it is the Jews. The Illumiati was founded by a Jesuit Jew and funded by the Rothchilds so the Illuminati at the top is the Synagogue of Satan.

The Protocols Of The Learned Elders of Zion are likewise true as Henry Ford said : you just have to compare what they predicted with what has happened.

It's hard to believe that this is the same France that banned Dieudonne's comedy tour and seized his assets on the basis of "anti-Semitism". Anti-Semitism is a punishable offence while anti-Islamic cartoons and statements are protected by freedom of speech and freedom of the press.

Regardless of who actually shot up the magazine's offices, it sounds like they had a death wish because they were continuing their nonsense after already being firebombed. I find it hard to feel sorry for them because when you are dealing with madmen you have to accept the consequences of your actions. If you go to the zoo and stick your hand in the lion's cage and he tears your arm off, is it the lion's fault or yours?

As a gentile, I have to thank you for your understands from my perspective why I am upset with the Jewish people. They hate me when I
trusted them with all of my heart. I don't hate Jews, I’m upset at the Jews for hating me, and I am reacting to their hatred of me. I want to
extend my thank you to you Henry Makow for this article;

You made me happy because you actually understand that it is the Jews hating us the gentiles that makes people reactive. Makow you are a God
send dear friend, I would fight with you on the battle field any time, thank you for your understanding.

I am the creator of the following blog;

I've been targeted so many times by the Jewish community I have become over reactive...but your work makes me see that there are good
Jewish people who understand...

Honestly, thank you so much for your work, you actually get it...the only person ever who actually gets it...

Many people here in Germany think the same. This is a false flag, like many other. and other governments in Europe will follow to kill their own people to steal our human rights and freedom. as they did in USA after 9/11.

Our condolence to the victims from Germany.
all normal people on earth in all countries want peace and freedom. don't let it be destroyed from single psychopathic, criminal fanatic.

This recent attack is going to be used to further demonize the Muslim population, and make them feel even more uncomfortable in Europe. I don't know whether to believe if the recent attack was a false flag attack or genuine, but I am not concerned about that. This attack is going to fuel the fire between Europeans and Muslims, especially when so many Europeans are protesting against Muslims, even their basic rights (Germans protesting against Mosques for example).

There will be further dividing and conquering, the Muslim population in Europe will probably be totally ostracized, and a new semi-pagan European ideology of European 'exceptionalism' will become the religion of many Europeans, with racism, anti-immigration, and intolerable ignorance (all fueling a false pride) being its religious tenets.

There will probably even be a lot of appeals to religion as a justification for these anti-Muslim feelings, with endless references to the crusades, historical wars between Christians and Muslims and incompatibility because of doctrine.

When you publish offensive material directly targeting a persons religion, it is a very acute attack. You can't attack someone's most intimate and personal beliefs and expect no repercussion, especially today when the Islamic world is extremely militant. By publishing such things, you willing join a war by committing another assault and fueling the fire for Islamic retribution.

Eric Zemmour has a best seller out on the immigration, 'The French Suicide', which is far more intelligent and useful than this article. For instance:

"The sacralization of race during the Nazi period and earlier has been followed by the negation of race. And to me, they're both equally ridiculous."

Zemmour has been harassed for five years by the equivalent of the B'nai B'brith ADL, the "International League against Racism and Anti-Semitism".

About the current event, I see Zemmour has been prominent in French media due to his celebrity there as a leading critic of the unregulated immigration menace. Yesterday he warned the French public that the journalist murdered made the fatal mistake of assuming the targets of their humor would play by the rules of French civility and law. It underscores his rhetoric that the "world Care Bears" have invited a violent culture shock war because they did away with traditional French assimilation requirements.

Zemmour echoes Marine Le Pen, and of course the French liberal media shills have accused Zemmour and Le Pen of "blaming the victims" - and poor taste.

Now, who did the murders? Yes, the fact that the shooters got away clean from the scene means it's almost certainly military precision hit, and thus a false flag. It's such a cliché the shooters always yell "ALLAH AKBAR!" That just seems so Hollywood. Can a Muslim reader comment on that?

There's not a shred of evidence that the MOSSAD had anything to do with it. If they did, then it's just as likely that Éric Zemmour is false opposition, pretending to be a French nationalist and assimilationist. I don't think so though. I'm not suggesting either thing at this point.

21 hours ago "a suspect turned himself in". This just in from BBC: the two at-large suspects robbed a gas station in Northern France.
http://www.bbc.com/news/world-europe-30721677

Well what do you know? The suspects are brothers - remember that - it's a common feature of these shootings. The Boston Bombing; the Jerusalem synagogue ax murders last year. Many others.
So now we have a name to be driven into our skulls by media! The Kourachi Brothers. Sounds like a nice place to eat.

"PARIS — When Chérif Kouachi first came to the attention of the French authorities as a possible terrorist a decade ago, he was in his early 20s and, according to testimony during a 2008 Paris trial, had dreamed of attacking Jewish targets in France...."

Here we go again, expect to hear about this one for a while until the next act of "false flagism" is perpetrated in whatever Western Christian nation they have on their agenda.

Ottawa , Australia, and now France. That leaves Spain and Germany on red alert. Italy and Greece are broke and no longer major players and probably won't be worth their efforts.

England and the US have successfully been put on board and hopefully won't need a tune-up flag.
Don't expect the French population to turn anti Arab on this one either. Multiculturalism has squashed patriotism in their country and a false flag terror event really won't revive it for long.
All these governments know who the real perpetrators are along with their motives and will cooperate with their demands for fear of more murders and chaos. They have been duped into believing that it takes wars to end the wars that never were.

good article by that french whatever. translates excellent.

now.. 100% pass the word around that Mossad is responsible. this one in France and other ones that they are most likely responsible for - just keep giving them the press.. and at the same time ask people to tear them apart.. in every way
open warfare.