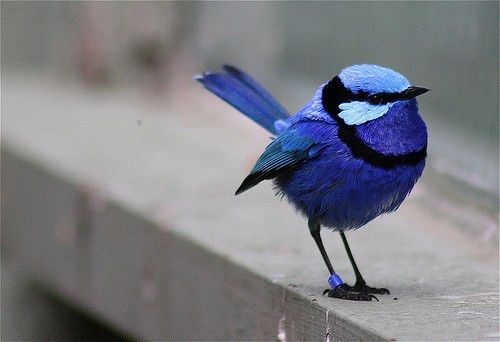 (left, a bluebird lands on your window ledge)

The problem with serendipity
is you can't pick up
a phone and order it.


Serendipity is vernacular for Grace. Grace is when you experience a kind of bliss through no action of your own. It is undeserved, a gift from God.

I can only think of two specific instances of serendipity.

During the hot summer months here in Manitoba, a friend showed me a swimming hole in a sand quarry.

The water was turquoise and pure. We used to go there with my dog, Raffi. There were usually only a couple of other summer pilgrims there. The place had a charmed quality. Afternoons were blessed. 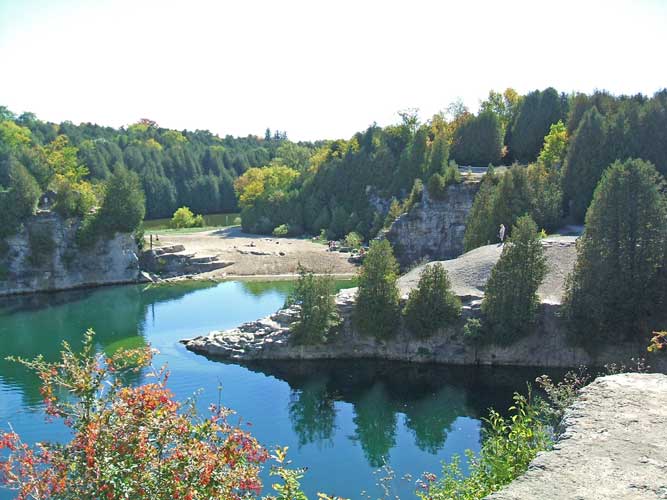 (This picture reminds me of my quarry)

Of course, special places that fall through the interstices never last. The company that owned the sand pit decided it could not be responsible for people drowning, although no one ever did. They put up NO TRESPASSING signs and NO PARKING signs on the nearby road. That took away the magic and we stopped going. Why couldn't they have simply posted disclaimers: Swim at your own risk! ?

One of the drawbacks of living in Winnipeg is you have to drive more than an hour to get to a lake. This quarry was only 25 minutes away.  It seems that society has a way of stamping out good things that are free.

Another example of Serendipity took place Sunday. My wife wanted to see the Salvador Dali exhibit at the Winnipeg Art Gallery. I didn't want to because I regard Dali and modern art in general as a fraud. And it was expensive. Nonetheless my wife was going to see it alone. I went.

The exhibit was a disappointment as predicted. The gallery was crowded and stuffy; the "art" seemed stale and underwhelming. My wife soon tired of it and we visited other exhibits instead. 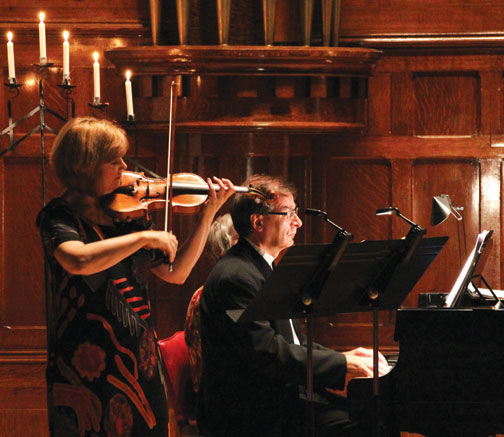 (Moroz and his wife,Gwen Hoebig)

On the way out, I heard music in the distance and was drawn down a passageway to the Gallery's auditorium. There, a lone pianist was rehearsing on stage. He was performing what turned out to be Schubert's Four Impromtus op. 142 D935 for a concert that evening. My wife and I sat down at the back of the dark empty auditorium and drank it all in.

I never go to classical symphony but Chamber Music felt more intimate. I was enthralled by the beauty of the music and the virtuosity of the performer. On an overcast, cloudy Sunday, I was transported to a better place.

When the pianist had finished, I thanked him. Turns out he was David Moroz, a local boy, definitely world class. I may subscribe to the Winnipeg Chamber Music Society.

But this was different from attending a concert.

----------------------------
Afterthought:  On reflection I realize that my life is testament to serendipity. My health and my wonderful wife; my success with Scruples and this website; the peace and prosperity Canada enjoys etc. I don't want to seem ungrateful. I guess I am talking here about small examples of serendipity.

Serendipity is an aptitude for making desirable discoveries by accident. This English noun was in 1754 (but rare before 20c.), coined by Horace Walpole (1717-92) in a letter to Horace Mann (dated Jan. 28); he said he formed it from the Persian fairy tale "The Three Princes of Serendip," whose heroes "were always making discoveries, by accidents and sagacity, of things they were not in quest of." The name is from Serendip, an old name for Ceylon (modern Sri Lanka), from Arabic Sarandib, from Sanskrit Simhaladvipa "Dwelling-Place-of-Lions Island."

The first Monday after Christmas in Old Galveston, I found a Vietnamese restaurant with not only the best food but the most beautiful Ukrainian and Moldavian waitresses. The afternoon was transformed into a feast of the senses.

This refreshing article about Grace. You drum on the evil a lot (which is a good thing, sure), but then showing your human side and just
saying: Hey, there IS more to it than their ways. Like the qoute(which I heard for the first time today, from my human mother no less
- Grace? :)): "better to light a candle than to curse the darkness".

Grace: Every year, when the plants start coming up, God is showing us that Life and Beauty will always, always, always be stronger than
anything arrayed against It. But, I respect your work, and thank you for it, too :)

All the Best, to you and your readers,

Thanks for sharing your two examples of serendipity with us and inviting us to share ours. I took a cruise in 2002. One of our ports of call was Key West. We were told not to rent jet skis or do para-sailing. So of course I went para-sailing. A paid extra to float extra high. I passed over an exclusive island where Paul Newman lived. Pretty cool. But the best was yet to come. As I wandered around town, I came to a place in the street that was blocked by a mob of people. There was a stage, but the black back of it was facing me. As I got closer, I could here the music and it sounded familiar. Turns out, it was a free Jimmy Buffett concert!

Proof of Grace is everywhere around us, but we are conditioned not to recognize it but instead to imagine that what we enjoy we have earned through our own efforts. For starters, just think about the mind-blowing coordinated functioning of the organs of your body. What do you have to do with the life-sustaining operation of this system?

The ultimate expression of Grace is our capacity for love. Those who experience love know that without it, living is pointless, and our purpose is to permeate all relations with love. Take notice, all psychopaths/careerists.

I think serendipity is different from Grace, being the unexpected happy conjuncture of events that impresses upon our minds that the world is not merely mechanical (cause and effect) but somehow is biased in our favour.

Years ago I was working in eastern Europe. One summer a group of us went on an end of summer vacation. A girl I'd had an interest in all summer ended up with me talking all alone on a beach in Greece as we watched the sun go down. After we rode back into town on my moped, we thought we'd try to find a restaurant in town for dinner. So off we headed off down dimly lit winding side streets on foot, getting lost and laughing till we found this little creperie on a little side street. We had a most fantastic and romantic dinner! We had more encounters that summer, all innocent but full of romantic tension. It was a great summer! My only regret, not kissing her as my train prepared to leave for Prague later that summer.

My second concerns my buddy. My almost constant companion for these last eight years - my dog. I had gone to the humane society to check out the dogs. I wanted a Shepard and as I was looking at one, a lady and her daughter wandered by stopping at the cage next to me, looked at this reclusive dog saying "Wow, that is an amazing dog!" before continuing on. I thought, perhaps I should take another look. I did, I put a hold on the dog for two weeks, coming back several times till I adopted her. I was living in a place at the time that didn't allow dogs but I did it anyway.

So, she started out from the start going everywhere with me. Eventually my landlord relented and she's been my faithful companion for 8 years now. I constantly have people stop me on the street commenting on what a beautiful dog she is and asking what kind she is. She's just a miscellaneous but she's been the best dog I've ever had. Everyone who meets her falls in love with her. She's been a blessing in a really mixed up world.

From our previous communications you know that I do not believe in what you believe about the past and the current world situations and the powers that you believe are behind it all (although I do believe as you do about the dangers of pornography ) but I do want to thank-you very much for what you wrote in your “Afterthought.”

It was not only very touching and sincere but extremely important as well.

Too often we get caught up in the negative that we ourselves see around us-whatever that might be-and we forget to “ count our blessings.”

Thank-you for the reminding us of that.

Well if serendipity is grace from God, then God has been generous with me.

A few personal examples I can think of are...
Coming home from a long mentally, physically and spiritually day at work and coming across a beautiful piece of music that captivates my attention fully for the rest of the night, helping me rest.

Or meditating on the goodness of God and being taken to a fuller knowledge of Him unknowingly.
Or simply listening to some beautiful piece of music and being taken back to some old cherished memory and remembering my hearts true desires.

And to fit all these 'chance' encounters with beauty into the whole current world conspiracy - “Beauty will save the world” Fyodor Dostoevsky.

Thanks for the article

Returning home from a pub meal two friends fell asleep. Unaffected by a single beer, I sat in a nearby chair musing about their good friendship and the recent departure of a girlfriend.

Emotional oscillation of happiness and melancholy suddenly morphed into a state of confusion between the two. As a scientist, I was fascinated and internally observed it for about 20 minutes. Suddenly a feint tingling began in my toes and fingers and a wonderful energy began flowing and amplifying from these points into the top of my head. After several minutes of almost unbearable pleasure a feint light flickered for a tenth of a second behind the eyes. The explosion of my consciousness screamed outward, bathed in the light of a thousand suns, imprinting on my mind the connectedness, knowledge, life, immortality and love of the universe behind the veil of "reality".

This Kundalini, evolutionary phenomenon, known throughout cultures and ages (except ours) is due to the grace of God.