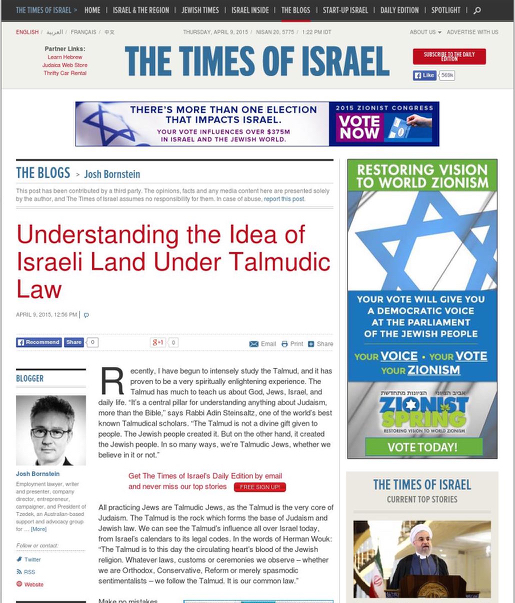 Soon after this blog appeared Thursday, the Times of Israel took it down. They said it was written by an impostor.  The real Josh Bornstein, an Australian lawyer, said he didn't write it. "I deplore racism," Bornstein said. "I have fought racism since I was four-years-old."

Indeed, this probably is a hoax. The article is just too extreme. Nonetheless, it accurately reflects the core beliefs of many Zionist Jews.  The phony "Josh Bornstein" is correct that, based on the Talmud, Judaism is a religion of hate. It teaches that non-Jews are animals destined to serve Jews. (See Note below article.)

"Josh Bornstein's" love of the Talmud is ironic since the real Josh Bornstein is the President of an organization that combats sexual abuse of children in the Jewish community. The Talmud promotes incest and pedophilia.

Illuminati Jews are trying to convince the goyim that Islam is the religion of hate. It's called,"Divide and conquer." In fact, Judaism as defined by the Cabala and Talmud is responsible for many of humanity's woes. (The world central bank cartel is owned by Cabalist, i.e. Illuminati Jews.) Judaism is a satanic cult masquerading as a religion. First Jews, then humanity were inducted into this cult in the guise of "secular humanism." This is the key to understanding the world.

Latest! Did white nationalists set up Bornstein for his well know advocacy of the Jewish agenda?

by "Josh Bornstein"
(abridged by henrymakow.com)


Recently, I have begun to intensely study the Talmud, and it has proven to be a very spiritually enlightening experience. The Talmud has much to teach us about God, Jews, Israel, and daily life.

"It's a central pillar for understanding anything about Judaism, more than the Bible," says Rabbi Adin Steinsaltz, one of the world's best known Talmudic scholars. "The Talmud is not a divine gift given to people. The Jewish people created it. But on the other hand, it created the Jewish people. In so many ways, we're Talmudic Jews, whether we believe in it or not." 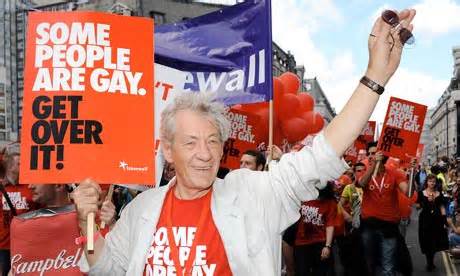 All practicing Jews are Talmudic Jews, as the Talmud is the very core of Judaism. The Talmud is the rock which forms the base of Judaism and Jewish law. We can see the Talmud's influence all over Israel today, from Israel's calendars to its legal codes. In the words of Herman Wouk: "The Talmud is to this day the circulating heart's blood of the Jewish religion. Whatever laws, customs or ceremonies we observe - whether we are Orthodox, Conservative, Reform or merely spasmodic sentimentalists - we follow the Talmud. It is our common law....Again, the Talmud is the foundation of all Jewish beliefs. How important is the Talmud? So important, in fact, that Israel is now basing much of its legal system on the Talmud."
`
1)  Under Talmudic law, Israel actually has the right to FAR more power than it currently has.

2)  The Talmud makes it very clear that all land belongs to Jews, and that Jews may seize any land that they so desire. Schulchan Aruch, Choszen Hamiszpat 348: "All property of other nations belongs to the Jewish nation, which, consequently, is entitled to seize upon it without any scruples." This is directly from the Talmud. Why, then, should the "Palestinians" be entitled to any land? Why should they even be allowed to exist?

3) In the words of top Israeli Rabbi Ovadia Yosef, "Goyim were born only to serve us. Without that, they have no place in the world; only to serve the People of Israel." Likewise, Rabbi Ya'acov Perin has publicly stated: "One million Arabs are not worth a Jewish fingernail." Shocking? It shouldn't be. This is Talmudic law as well. The Talmud makes it very clear that the life of a non-Jew has no value, and that gentiles exist only to serve Jews.

Sanhedrin 59a: "Murdering Goyim is like killing a wild animal." Abodah Zara 26b: "Even the best of the Gentiles should be killed." Baba Necia 114, 6: "The Jews are human beings, but the nations of the world are not human beings but beasts." Midrasch Talpioth, p. 225-L: "Jehovah created the non-Jew in human form so that the Jew would not have to be served by beasts. The non-Jew is consequently an animal in human form, and condemned to serve the Jew day and night."

I am sick of hearing "Palestinians" complain about "oppression" and "genocide," even though Israel has never once come anywhere close to giving these Arab cockroaches the real genocide that they so richly deserve. These two-faced, terrorist-supporting "Palestinians" NEED to suffer a real genocide, and, if violence against "Palestinians" ever goes viral in Israel (and I know it will), I myself will not hesitate to move to Israel, join the IDF, and take an AR-15 to the nearest mosque, especially if on a Muslim holiday like Ramadan. I would love nothing more than to savour the screams of "Palestinians" as I invade their "safe" places and mow them down with advanced Israeli weaponry.

In other passages in the Talmud I discovered a possible reason why some of the Talmud's writers had forbidden Gentiles to read it. The Talmud's words are vitriolic:

• Even the best of the [Gentiles] should be killed. ( Babylonian Talmud)109

• Gentiles' flesh is as the flesh of asses and whose issue is like the issue of horses.111

• God will not spare a Jew who 'marries his daughter to an old man or takes a wife for his infant son or returns a lost article to a Cuthean [Gentile]... (Sanhedrin 76a.)115

• [Gentiles] are outside the protection of the law and God has 'exposed their money to Israel.' (Baba Kamma 37b.)117

• The vessels of [Gentiles], do they not impart a worsened flavor to the food cooked in them? (Abodah Zarah 67b.)121

Neither the 'Times of Israel Staff' nor Bornstein refute the Talmud quotes in the 'hoax' attributed to Bornstein.  The translations are correct and properly cited:  Sanhedrin 59a, Abodah Zara 26b, Baba Necia 114, 6, Midrasch Talpioth, p. 225-L,Bammidber raba c 21 & Jalkut 772, Coschen hamischpat, and  425 Hagah 425. 5.

They don't refute them because those quotes really are from the Talmud, uncensored.  Since those quotes also happen to be the most well known goyish anti-Talmud websites, I suspect what's going on here is an attempt to cast aspersions upon Talmud critics such as Michael A. Hoffman II, who wrote a very useful book titled 'Judaism's Strange Gods ' [1]

Hoffman writes: "A common rabbinic defense against criticism of the more blatantly horrible passages in the Talmud, is the allegation that the Talmud is merely a record of debates, and that no Talmudic sanction is given to either side of the debate ".

I fell for that explanation for years, until I studied enough to learn that what matters in the Talmud isn't the letter of the law, or 'prima fascia' as in Roman law, and common law.   What matters can aptly be called Yiddishkeit, or "Jewishness".   Yeshiva students that have studied under rabbis for seven years are full initiates into 'Halakhah', which is defined in goyish dictionaries as "Jewish law", but translates more like "the Walk" as in the expression, "he talks the talk, but can he walk the walk?".

When you know how Talmudic thinking works, the 'deniable plausibility game being played the 'Times of Israel Staff' and perhaps  Bornstein too, seems quite Talmudic.  Would it be Halakhah for Bornstein to hold the views cited from the Talmud, yet say "I abhor racism. I've fought racism since I was four."   Absolutely.  It's Yiddishkeit to deceive a goy.   In fact it's a mitzvah.

Neither Bornstein or 'the Times of Israel staff' refute the quotes of Ovadia Yosef (1920-2013) the late chief rabbi of Israel, or more importantly the Likud party's Yaakov Vider: "We will legally define the Talmud as the basis of the Israeli legal system."

To quote another poster:

“When was the last time anyone heard a "Christian" pastor warn against usury? “

Any priest who doesn’t have the courage to challenge this fundamental aspect of our enslaved lives is not worth the consecration.

One translation of the lords prayer says “forgive us our debts, as we forgive our debtors”.

Remember ... that the hierarchy no longer enslaves individuals, it enslaves nations!

Until this is sorted out.......hope is a distant memory.

Christ and His Father are all light, with no darkness at all. They're pure good. The Christian egregore attaches to that light and Christians are to become thereby the "light of the world."

Islam and Talmudic Judaism are connected with the Evil One, and they both spring directly from him.

In Revelation, we glimpse a picture of Heaven with the Holy Trinity of the Father and the Son with the Holy Spirit flowing by the Throne of God as a river. The Body of Christ, the Church - the Christian Egregore - is connected with that goodness and channels that grace.

So, biblically speaking, Christianity has two enemies, both Earthly egregores - the Peoples of the Talmud and the Koran. They are the same inasmuch as they are both connected to Satan - one through the Antichrist, the other through the False Prophet.

You rightly recognize the evil of the Talmud. Its egregore truly is the Church of the Antichrist. But in your zeal to lay all of that bare, please do not make the mistake of thinking that the Koran and its egregore - the Islamic Umma - is any less the enemy of the Church.

Another problem that comes from Talmudic Judaism (TJs) is that some of its sickening doctrines also show up in the United States Code. Under the statutes and codes we seen that the "laws" consider men, women, and children as animals. The idea of this nonsense comes from the TJs and has found its way into the laws of the govtards. Perhaps this is the reason why people's rights have been so routinely violated because the government systems consider the people to be animals.

People seem to be living at a lower level than the animals, so it really is insulting to animals in saying than men are beasts. Mankind is supposed to be living on a much higher level than the animals, but when their lives go outside of the natural law, then it destroys the joy of life. An animal knows his limits and stays within its own natural boundaries.
The evil in the banking system is in charging interest, but in the bible is says that Jews are allowed to charge the "stranger" interest. (Deut 23:20) The implication here seems to say that the Jew has special privileges over the goyim. However, if charging interest is considered stealing, it would be considered stealing by all people. Jews aren't special; the commandments are the same for everyone. The stranger seems to be the non-jews. So the Talmud has also found its way into the bible. And today, the banking system is dominated by Jews.

I try to avoid any religious writing as they seem to contradict the commandments.When was the last time anyone heard a "Christian" pastor warn against usury?

This type of exposé is sorely needed in today's world.

Copies of this article and a hundred or more passages from the talmud "devil's book" need to be force fed to every last idiotic protestant "Christian Zionist." These people are willfully ignorant, never actually reading the bible they claim as their religion. All they read are the same few passages warped by the contrived "notes" of the criminal Scofield into lies against the bible itself, to which irony they and their "preachers" remain clueless robots.

The new U.S. Senator, Tom Cotton, dangerously ignorant spiritual son of insane McCain should have to swallow the whole talmu