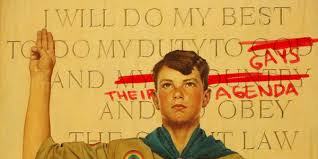 The illuminati is a satanic cult that controls us by making us sick.
Boys need male role models. Homosexuality is a developmental disorder
often spread when a youth has no male model or endures a homosexual assault.
Having homosexual scout masters is designed to pervert youth.
BSA President Robert Gates, a former US Defence Secretary and
member of the CFR is leading this attack on gender.
Related- Transgendered Girls Welcome in Girl Guides
by  Paul Ahnert
Boy Scout Top Man Urges Switch to Gay Scoutmasters
On Thursday, the Boy Scouts of America convened it's annual convention in Atlanta GA.  President Robert Gates addressed the convention and urged the BSA to reverse it's ban on homosexual scoutmasters. As part of his remarks, Gates claimed that court challenges to the ban would be inevitable, costly and ultimately lead to the collapse of the organization.
Gates went on to explain that, though he had planned on not addressing the proposed policy change, the culture and laws had changed so dramatically and so quickly over the past year, he felt he had no choice.  Gates did address the concern that many churches serve as charter organizations and would not continue to sponsor a program that allowed openly homosexual men to serve as scoutmasters.  In concession, Gates suggested that each charter would be able to determine it's own policy concerning who would be able to lead within that charter.  Gates also claimed to have no hidden agenda, only the best interests of Scouting going forward.
FIRST POLICY CHANGE
This pronouncement comes on the heels of an historic policy change 2 years ago, when the BSA voted to lift the ban on gay scouts.  Citing financial concerns, BSA voted to reverse it's 103 year policy to ban homosexuals from the organization.  Many major donors threatened to withdraw funding if the BSA continued to exclude membership based on sexual preference, or so the leadership council claimed.
In 2013, BSA voted to allow gay youth to join as scouts, but did not address the issue of gay leaders, leaving the ban on gay scoutmasters in effect.  Some families viewed this change as an endorsement of a lifestyle they believed to be morally wrong and withdrew from membership, my family included. Click here for my blog on the 2013 policy change
The vote did not have the desired effect, as many of the donors that were threatening to withdraw funding felt that the council did not go far enough by not allowing gay leaders to join the organization.  Some churches withdrew support and charters due to the policy change, leaving troops to find new charters and meeting places.  Though few people believed that the vote in 2013 was the end of the matter, the change managed to anger those on both sides of the issue and accomplished no real benefit to Scouting as a whole. 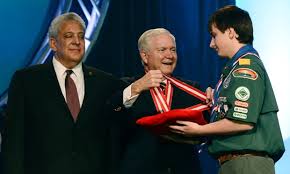 Regarding the treacherous and evil plot to destroy our young men and boys in the Boy Scouts of America I submit the following comment to be posted at your discretion:

It would be more profitable for him if a millstone were hung around his neck and he were hurled into the sea than that he should cause to sin or be a snare to one of these little ones [lowly in rank or influence].

I was a boy scout, den chief, patrol and senior patrol leader. Later I got my wood badge and was an assistant scout master. My father was a scout master and I am the father of an eagle scout. I personally got more out of boy scouts one night a week and one weekend per month than I got out of 5 days a week in high school. I would look forward to next year's scout camp or 50 mile hike with such enthusiasm that I could hardly contain myself.

Wish I could say that for public high school, it really sucked.

It is a shame that BSA is degenerating to the point that parents are withdrawing their sons because they feel it is now creating more harm than good.

Robert Gates is a member of the exclusive band of elite that must destroy all semblance of Christianity, so their Agenda of a new world
global "disorder" can be put into place. God and Christianity must be eradicated from any and all organizations in our country, in order to
make sure that every area of society is compromised and adulterated with the scourge of immorality and perversion, that includes the Boy
Scouts. Nothing can be tolerated that smacks of God or Christianity.

That is why these same perverts have gone after the Catholic Church and infiltrated it, as they have infiltrated every area of government. The Agenda that is being imposed upon our country is not one that allows individual freedom. No, all must belong to the "collective" and anyone
not conforming will be neutralized as is the norm in every Communist, Marxist country. It also means that there will be a One World Religion.
They must have control of the Catholic Church in order to implement a one world religion, since it is the biggest transnational church, and
the oldest in the world. Making sure it is compromised from the inside is essential which is why these same elites have subverted the Church
with homosexuality - by controlling the seminaries. Nothing escapes their trap to destroy all morals and impose depravity, evil and destruction.

Since I come from a very perverse country ("Israel"), having stumbled on so many perverts at work, studies, society, politics, media and military service, I draw several systematic conclusions on the subject matter of this email's title.

I think that Homosexuality vs. Sexual Confusion
are two important phenomena apart, where the latter complements the former in distorting society.

Thus I find that the purposes of confusing people of ALL ages
in to LGBT lookalikes are:
1. To camouflage the real perverts in public and in generic social circles.
2. To weaken the masculine and feminine characters,
by means of 'learning by doing',
thus making society much more controllable:
2.1 Turning the men docile.
2.2 Turning the children in to state indoctrination [Aaron Russo].

The way to restore Heterosexuality is to keep society under a dogmatic Heterosexual regime for generations (perpetuity?)- till all born humans are from a tranquil Pregnancy and are exposed only to Heterosexual exemplary behavior
e.g. NO females in "leadership", "police" or aggressive sports.

The definition of perversion is "the alteration of something from its original course, meaning, or state to a distortion or corruption of what was first intended.

The world is awash with men and women whose intent is to normalize sexual perversion. They are by definition perverts. What parent in their right mind would knowingly encourage and allow their sons to be guided by a pervert? It would be a form of child abuse. Perverts are by definition immoral people.

Scouting is all about character building. Part of the Boy Scout Oath is that the Scout is "Morally Straight".

He is also to be "Trustworthy" - to be trusted and tell the truth always.

The perverts are planning to compel all boys and scoutmasters to be liars if they are homosexuals. That is totally against the Scout Law.

This has nothing to do with character building of young boys.The Boy Scouts of America can't have it both ways if they choose to condone perversion.

By so doing, the movement will soon cease to exist.

James, a former Scout and Scoutmaster