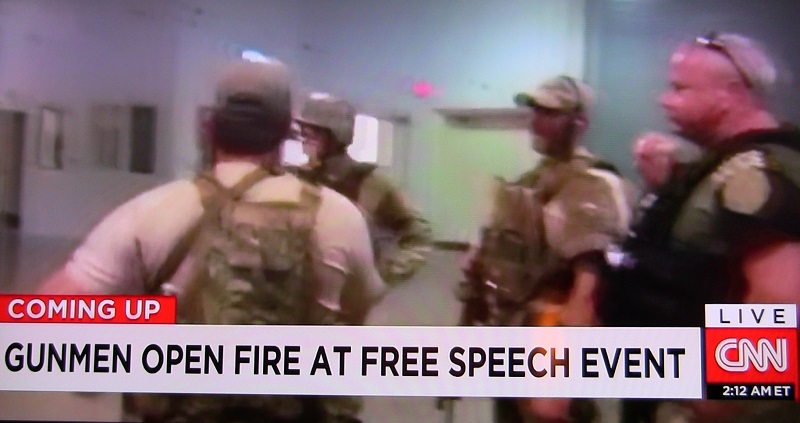 On Sunday, two gunmen attacked an anti-islam event in Garland, a Dallas suburb, and were killed by police.
The incident reeks of another Hebdo-like false flag.    Our correspondent, Dan, writes: "Media's still trying to sell the Garland 'terrorist attack' story, but I think it seems to be 'taking off like a lead balloon.'
"Cops aren't aren't really convincing liars.   The crisis actors phoned in their performance.   The whole exercise is tedious and boring since there's no action footage at all -- and the only people killed were the alleged shooters.   And they've not shown evidence the men were even there -- or that even exist.  No interviews with parents, friends, neighbours, etc. "
FBI Groomed Patsies Shot
Garland Tx shooting staged event
Texas (Muhammad Cartoon) Shooting Hoax of May 3, 2015 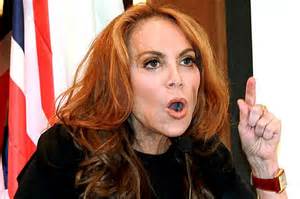 The event, a "Mohammed cartoon contest,"  defended the right to ridicule Islam in the name of "free speech." It was organized by the Jewish hate group run by Pam Geller, left,  that is planting hate messages on NYC buses. Below, Michael Hoffman points out that if the tables were turned, and the only thing sacred to Jews was blasphemed, the event would face criminal prosecution.
What is Sacred to Americans?
By Michael Hoffman
The "free speech" fest in Texas that resulted in the police shooting of two apparent terrorists at the Curtis Culwell Center in Garland, marks growing prominence for the movement for free speech for anti-Muslim satire, led by the American Freedom Defense Initiative, a well-financed New York Jewish group.
No similar type of organization in America dares to test free speech for anti-Auschwitz gas chamber-hoax satire, however. 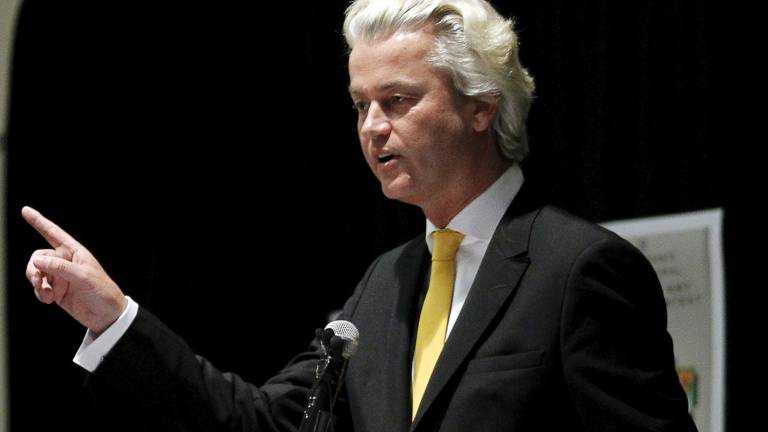 (Dutch Zionist mannequin Geert Wilders flew in for speech)
In Europe, if you mock Muhammad, the West will hail you. If you mock the gas chambers they will jail you.
In the late 1980s, after Zionists in Torrance, California burned hundreds of thousands of dollars worth of books questioning whether Six Million Judaics really died in World War II, this writer created a comic book, Tales of the Holohoax. In Britain two men distributed it and went to prison. Simon Sheppard was sentenced to three years and ten months and Stephen Whittle for one year and ten months, along with the seizure of their computers and printing equipment. (You can read the British court's lengthy decision here).
When the "Charlie Hebdo" people were massacred in Paris last January 7, we contacted major media in the US and Britain to remind them, in the midst of their stirring hoopla for the rights of "Charlie" to denigrate Muhammad, that two English guys had rotted in prison because the West does not confer that same right on satires of Holocaustianity. We were ignored.
In the U.S. there is that right in theory, but in fact those who satirize the Talmud, the Holy State of Counterfeit "Israel," and those miraculous execution gas chambers, most likely won't be able find a hall or building to rent for an exhibition; they won't have police protection or a well-funded New York "freedom of expression" organization behind them. What is the use of a right if one can't exercise it? The level of demonization of "Holocaust" satirists is so savage it mostly preempts our right to any meaningful exercise of freedom of the press.
So which is more sacred: the fake homicidal gas chambers of Auschwitz-Birkenau, or the person of Muhammad? There's no contest. Holocaustianity is the informal civic religion of the West; the last truly believed religion in the otherwise agnostic West. Woe to those who would even think of mocking it.
SHARIA LAW AND TALMUDIC LAW
Yahoo state legislatures in the misnamed "Bible belt" (actually it's the "Talmud belt") have gone ballistic over the supposed imminent imposition of Islamic "Sharia" law on America. Personally, I don't see much sharia law in the USA, but I do see a surfeit of Talmud law.
For example, just a few years ago even the liberal state of California passed a law prohibiting the "marriage" of sodomites. Similar enactments of the will of the majority of the American people were widespread across the nation. Then Talmudic tactics were employed by Federal judges. In Orthodox Judaism laws are not made by a legislature.
In Judaism, the law is made by judicial decision. Rabbinic courts make the laws and it is by that law-making function of the US courts that the will of the majority of the American people has been overthrown.
Through Talmudic-style jurisprudence, the chicken littles who have raised the alarm about Sharia law have seen their family values flushed by "gay" rights, law-making judges who have usurped the function of a people's legislature, in line with the Talmud.
The influence of Talmudic law, like the phony homicidal gas chambers of Auschwitz, is too sacred to become a point of contention in America. We have been infantilized by Big Brother to concentrate our indignation on approved targets: Muhammad, Islam, Sharia law.
The Americans crying the loudest against the spectre of Islamic rule in Tennessee or Alabama or Arkansas support the Republicans in Congress who obey their Israeli god-kings. These Republicans pressure Obama to ally CIA-backed "Syrian rebels" with al Qaeda's Nusra front because the script decrees that like Libya, the government of Syria must fall to an Islamic fundamentalism controlled by Saudi Arabia, a key Israeli ally.
The media's rage is directed at Iran because that's where Netanyahu has ordered American anger to be focused, while Saudi Arabia, which will not permit a single Christian church to exist on its soil and whose perverse Wahhabist theology inspires and directs ISIS and al Qaeda, is presented in the media as America's friend and ally, compared to dastardly Iran.
In Israeli hospitals al Qaeda fighters wounded in Syria are being treated, after which those fighters are returned to the battle field. The Israelis are aiding and abetting terrorists. Nothing new about that.
The CIA built up the Taliban prior to Sept. 11, 2001 and then American men and women were sent to fight the Taliban. The CIA is ensuring the fall of the pro-Christian government of Syria to Saudi proxies. Christians will flee and Syria will serve, like Libya, as another huge staging area for al Qaeda and ISIS. The wars and instability this will generate will cause Shiite Iran to react defensively.
BREAD AND CIRCUSES
74 million bucks was shelled out by thousands of suckers to sit in the presence of two pugilists doing a dance in Las Vegas over the weekend of May 2. Many tens of thousands more paid one hundred dollars to watch the charade at home on their glass toilets. Besides the Talmud and Holocaustianity, coliseum sports are the other sacred icon of Americans. This is what counts with them. This is what they will pay exorbitant prices to see.
Every four years increasingly insane Americans pause to wonder why presidential elections offer no real choice and why criminal politics and the Money Power continue to rise across the land.
People whose god is the Prime Minister of so-called "Israel," or a $100 million-a-fight boxer will get the country and the future they deserve.
+ + +
Michael Hoffman's website.   Support Michael Hoffmann's new book "The Occult Renaissance Church of Rome."
Disclaimer: We do not share Hoffman's view of the holocaust.  If it were a hoax, then Jews would be the only Europeans not decimated in WW2.

Comments for "Texas Hebdo Redux: Free Speech for Illuminati Only"

I've been surprised they weren't able to come up with a better Hebdo copy-cat op than this poorly scripted scenario.

The Paris operation killed over a dozen fairly well known cartoonists, plus several more innocent bystanders in a deli.

To be comparable with Charlie Hebdo, the gunmen would have had to have been allowed to march into the hall and kill at least a dozen identifiable people; then escape to the nearest deli, and shoot some more before going down in a hail of bullets on video.

All that I see going on here is a couple of black guys got gunned down by a bunch of white cops, without witnesses.