US Prison System is a Boondoggle 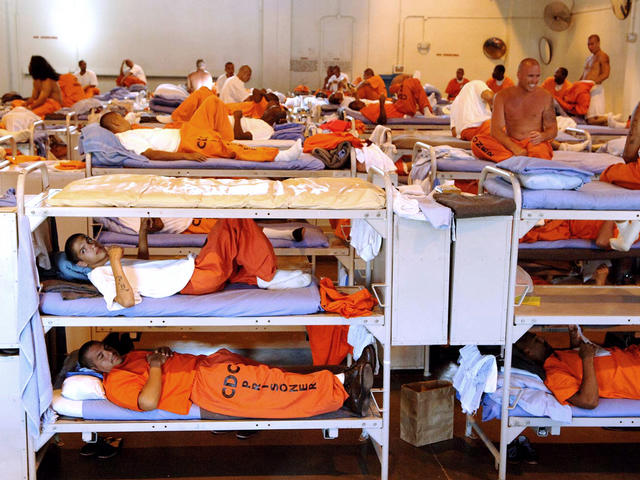 (Left, "They're stacking them up like chordwood," Angelo says.)
One of my correspondents, Angelo, served prison time.
Prison is not an effective way to punish victimless crimes, he says.
He calls prison a "finishing school" for criminals.
by Henry Makow Ph.D.
"Angelo Rossi's" father was a gangster associated with the Genovese family.  Angelo was arrested in 1984 for having a kilogram of cocaine.  He knew he'd have to skip bail because any plea deal would require him to rat out his own father.  Angelo escaped in the nick of time and built a new life and successful career under an assumed name.
"The Feds didn't even look for me," he says."That's how lazy these bureaucrats are."
Unfortunately, in 2000, his alcoholic father-in-law, jealous of his success, turned him in. Angelo served 30 months at Coleman Minimum Security facility in Florida where he developed his critique of the US prison system.
Angelo sees the prison system as a boondoggle, the bureaucratic equivalent of the Military Industrial Complex. The U.S. imprisons 3/4 of one per cent of its population -- the highest incarcerated population in the world. There are currently around 2.2 million people behind bars in the US, equal to a city the size of Houston.
In the 24 years (1987 to 2011,) the States' budget for prisons ballooned from $12 billion to $52 billion. Add another $6 billion for the 250,000 inmates of Federal Prisons.
[Daniel D'Amico, an economic professor at Loyola University says,"The model is, if you build it they will come. Because we have all these prisons and all of these other resources funnelled into our criminal justice system, we have this ability to enforce things that would otherwise be unenforceable."
"That includes the drug war, but it's also including everything from the Martha Stewart types to immigration policies. The scope of things that are now criminal in corporate law is exponentially higher than it was merely twenty years ago."]
Angelo says that half the inmates had minor drug offences or petty crimes. People get ten years for marijuana possession. It costs $30,000-$50,000 a year to house a prisoner. Prison bureaucrats earn fat salaries and do nothing. Legalize and supervise drugs and you could cut the budget in half.
"Prison is finishing school for criminals," Angelo says. "They make contacts and learn skills they could never get anywhere else. More important, they learn to hate the government. I spent three weeks in solitary confinement. You identify with fellow criminals and see society as the enemy."
"They have to find other ways to punish people. House arrests. Drug counselling. Work details. Prison is not the answer." 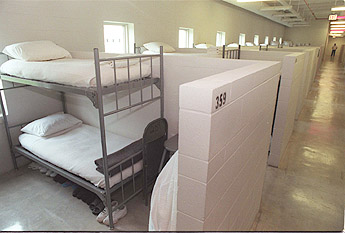 (There is an opportunity to take language classes and get a high school diploma, so it's not all bad.)
SERVING TIME
Angelo says that  although Coleman is one of the cushiest prisons, serving time was a "nightmare." He had to share a 9x9 foot cubicle with two other inmates, and these were not the kind of people he'd normally associate with. In his first month, he had to beat up a bunkmate who was kicking the mattress from below and wouldn't stop. After that, he got a reputation as a fighter and was left alone.
Every dorm had a "Queen" who would offer her services for prison currency - cigarettes and commissary goodies.
Angelo "stayed by myself" or hung out with a Jewish pot grower. They spent their time playing pool, basketball and "walking the track." You "don't look people in the eye."
After release, Angelo returned to his $250,000 per annum sales job and his million dollar mansion. He was on parole for three more years. When his Parole Officer visited Angelo's gated community, and saw Angelo's $93,000 Porsche, "there was hate in his eyes."
-------------
First Comment from Jim:
As a retired corrections officer I would concur with most of Angelo Rossi's assessment of the US prison system.
In the state where I worked, we went through a 25-year prison building faze because of a "get tough on crime" law that was approved by the voters. (It should be noted, though, that the law created minimum sentences for violent and person to person crimes and not for drug offences). Since the law was passed in 1994 the prison population has more than doubled.
But it seems that officials have over estimated the number of offenders that were to be sentenced under the law because we presently have one prison complex with 1228 empty bunks.
We would do better if drug "offenders" were treated rather than incarcerated but I do think that the drug profiteers should be prosecuted using RICO laws. However, the prison industry is a very profitable one, indeed, because a lot of companies, vendors, law enforcement agencies and their suppliers have a large stake in ensuring that prisons remain full.
--------
Related- Inmates Write (from Dan Abshear)
----------   The Private Prison Industry

Comments for "US Prison System is a Boondoggle"

I don't believe "punishment" does any good for prisoners. They need emotional help and therapy. Unfortunately few get it and even fewer therapists are effective.

Having volunteered in a county jail as a therapist, I found that many of the prisoners suffer from dissociation, sub-clinical maladies and personality disorders. They don't want to behave they way they do and many come out worse than how they came in. The majority were abused as children and to further abuse them in the prison system, I consider barbaric.

In the USA apx. 80% re-offend sooner or later. In Norway where psychotherapy is mandatory, re-offence is about 30%.

Also, once a prisoner is released, the blot on their record will prevent them from getting any meaningful employment for the rest of their lives. So they return to crime out of rage towards the system.

One inmate received 10 days solitary for J-walking as a teenager. He has a near genius IQ but made the choice to become a professional criminal from that experience.

Another inmate was sentenced to life for stealing a $65 coat under the 3 strikes law. It will cost the government taxpayers over a half a million dollars to pay for this Walmart coat.

It is my hope someday that the barbaric US prison system will be shelved in history along with Soviet gulags and Jim Crow chain gangs. Honestly, some of the personnel in the prison system are worse than the people the lock away.

But the root of the problem is the general population still ignorantly believes that punishment will somehow cure mental disorders and crime in general.

Henry , thank you for this very well stated presentation .... Your dispatches are consistently excellent ....They should be read and taken seriously by everyone...but unfortunately they won't be.....The masses of the public generally prefer feel good fantasy to factual - but uncomfortable reality....This feature of public mentality was detected and exploited to enormous personal advantage by a deranged lunatic ....one of the most destructive men in history ....Adolph Hitler ! A similar level of bureaucratic contempt for the public seems to exist in the minds of many current politicians .

I live in Florida and have a neighbor whose daughter is in prison for being with the wrong person at the wrong time when she was on probation for drugs. This young woman should be
doing some community service and/or schooling to help her further her ability to do something constructive with her life. Unfortunately, the prison system has been set up as a "catch twenty-two" so that you're dammed if you do and dammed if you don't. There are no jobs for these young people,because the elite have made sure there aren't any, as you well know.

It's an abomination what is happening to our country and culture because of a bunch of pathological liars and perverts who care nothing about human beings but enrich themselves at the expense of the rest of Americans who
pay the bill and those who fall into their clutches.

I was surprised to see your latest post about U.S. prisons.

Just the last two weeks, I was doing a lot of research on the private prison system in America and was stunned and deeply angry at the level of corruption that takes place in these prisons.

In fact the whole idea of prisons for profit makes me sick and I lost faith in the American "justice" system because of this.

Now I understand why America has the highest prison population in the entire world AND why the recidivism rate among former inmates is so high.

I've always been a no-excuses "tough on crime" kind of person and I still am.

However, I also believe in redemption and the power of God (the one Creator of all mankind) to transform the hearts of even the most hardened criminals.

Unfortunately, the people who stand to profit from the U.S. prison boondoggle would lose money if more prisoners turn to God for forgiveness and help.

This brings up hard feelings from me so my response sounds like a rant.

Growing up in the States I was fully indoctrinated into the myth of how we were the "land of the free" and had a duty to play the bully big brother to any country that we see as needing out interventions -- why so many 'mericans love foreign military interventions.

As much as I despise the left I equally despise the right for these things and their patronage to 'Saint' Reagan -- the originator of the war on drugs. I remember what it was like before the war on drugs (us) and that was last the remnants of a free society. The shift towards an authoritarian police state began with that war on drugs and I get so p*ssed that many of the sanctimonious Americans who continue to support this fascist police state themselves used recreational drugs when they were teens -- I can surmise that because most of the teens I knew in the 70s and 80s used recreational MJ at the least and most of them are now "prudent" middle class Americans who have nothing but contempt for anyone who does what they did (and many of them still do in secret but in our society if you don't get caught it's as if it didn't happen).

About 20 yrs ago I took a weekend job driving taxi cab in Sioux Falls, SD (drive taxi and you'll see what people are really like) and one night I picked-up a woman who had just been out "partying." In conversation she said she worked at the state prison and went on with sickening details explaining how she loved the authority she had over men. She even bragged about how she would abuse the prisoners just for her amusement -- remember that many of those victims of her abuse were in there as mere drug offenders.

More recently (starting 10 years ago in ultra conservative South Dakota) my wife's nephew was busted for pot possession at 18 or 19 years of age. Well, after serving two years for that first offense he's been on the revolving door routine ever since -- going back to the big house for minor parole violations. But they probably like that because they've taken everything he had and they're taking his future too but I'm sure he's been a great asset for the prison labor industry they've been running. Honestly, the reason for the parole violations is he's got legitimate PTSD from his first tour in the state prison system and whenever he self-medicates with anything --alcohol -- he violates his parole and back he goes.