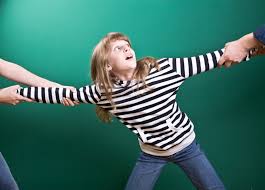 A custody case in Ontario
proves Western society has
drunk the Kool-Aid.
Judge awards part custody of 5-yr-old boy to mother determined he should be a girl. Judge says the child should decide what his gender is.
"We are brain-dead and stupid to allow this toxic, hateful attack on our heterosexual identity become official policy."
By Henry Makow Ph.D.
In olden days, identifying a boy or a girl was a simple matter. A boy had a penis and a girl didn't.  A boy played with toy bulldozers while a girl wanted dolls.
Nature hasn't changed but Western society has. It is dominated by a Cabalist (Masonic) Jewish satanic cult (the Illuminati) that believes mind trumps nature (reality.) No matter their biology, people can choose "to identify" with either gender.
This is illustrated by a custody fight in Oakville, Ont. where a mother was raising a five-year-old boy as a girl. She sent him to school dressed in girl's clothing and referred to him as "she."
The father objected and eventually the Halton Children's Aid Society removed the child and his younger sibling from their mother's care.
However, on June 1, a feminist judge, Sheleigh O'Connell, ruled that the agency was too hasty. She ordered that joint custody be reinstated and the child, "S," be allowed to pick his own gender. According to the Toronto Star, she wrote:
"S. has the right to express himself the way he so chooses and it is hoped that each parent will accept, respect and support S. as he develops, in whatever way he develops."
O'Connell ordered that the boy should be dressed as he wishes and not unilaterally pushed toward either a male or a female identity. If he wishes to dress like a girl, O'Connell wrote, the parent in custody of the boy is to respect this desire, but is also required to notify the other parent and the Children's Aid Society.
O'Connell's ruling was based in part on an evaluation of the child by Dr. Joey Bonifacio, an expert in gender identity at SickKids Hospital in Toronto. Bonifacio found the child displayed both stereotypical male preferences -- for example, playing with Transformers or Captain America toys -- as well as stereotypical female preferences, including liking pink and purple and wanting long hair.
Bonifacio found the boy was an extremely intelligent, loving, and articulate child who was associating some traditionally female behaviours and preferences with a need to change genders.
"S. only expressed affective statements that were tied to gender expression such as, 'I want to be a girl. Girls have long hair,' " Bonifacio wrote.
O'Connell wrote that S. was aware of his parents' conflict over his gender identity and tended to express conflicting views about his gender to different adults, including his mom and dad.
This is a terrible judgment. There's no way the mother will not try to convince her son
he is a girl.
CONCLUSION
Obviously, this child has been confused by his screwball mother. The judge and psychologist aren't helping the boy "express himself." They are promoting gender dysfunction and homosexuality. A healthy culture cultivates and affirms a child's inherent gender characteristics. When the culture contradicts them, as in this case, dysfunction ensues.
We are brain-dead and stupid to allow this toxic, hateful attack on heterosexual identity become official policy.
Question the homosexual lifestyle and you're a 'homophobe' yet the Illuminati and their  minions can trample on heterosexuals and their children with impunity.
In Ontario, homosexuals who want to be straight again are forbidden from seeking help.
The government is imposing a program to sexualize children (aka "sex education) designed by Benjamin Levin, a jailed convicted pedophile.
All the scientific research shows that gender differences are hardwired. Neuropsychologist Dr Anne Moir writes: "The difference between men and women is not merely physical. It is neurological, too. Male and female human brains are wired differently, causing us to think, feel, react and respond in strikingly different ways."
Anyone who has known male and female toddlers can confirm this. In nature, gender is universal, ranging from creatures at the bottom of the oceans to those on mountain sides. Gender is essential to human personal and social wellbeing.
Yet Satanists think they can trump biology by warping our minds. This is part of an insidious plan to reengineer society to serve the Illuminati, by emasculating men, destroying the family, taking over reproduction and making people sick.
If we let them continue, we deserve our fate and more.
------
Thanks to Patricia for the Tip!
Related:
More details of this case here: Kudos to the father

Brain Sex: The Real Difference Between Men and Women

White Woman Self Identifies as Black   by Mike Adams
First Comment from Rich:
Absolutely disgusting! The words of the judge are key here when she said;
"S. has the right to express himself the way he so chooses and it is hoped that each parent will accept, respect and support S. as he develops, in whatever way he develops."
The word "express" is something that women overall obsess over. It's ALL about their expression of themselves, their feelings, fears, wants, needs, etc. To women, feelings ARE reality, regardless of whether their feelings are wrong or right, women overall believe that they are 110% the truth as if every feeling is from God Himself.
Many women have asked me when I told them their feeling was wrong (Something that infuriates most women) "Then why did I have this feeling if it's not right?" I'm thinking "really, you can't understand that hormones, moods and the bodies bio-energy are responsible for feelings based on other emotions, visual or auditory stimuli, hormonal flux, etc ?"
But they still continue to believe that their feelings are 100% right, never lie and are never wrong. Thus this goddess and radical feminism is not only about trying to give women superiority. it's about trying to feminize society in every way. Just as women view their feelings as reality, so this to feminist judge is also giving the child's feelings 100% validity by giving the OK for the child to dress in any way he/she FEELS is correct, regardless of biology or other factors.
Of course with the influx of Rgbh growth hormones in animals for decades now, along with estrogen emulating and chemicals in the water and food supply plastics such as BPA, children born now are having their normal hormonal balance greatly disrupted so that gender confusion can be a real phenomena today.
But my point is on how the female mindset of giving feelings and emotions 100% validity and reality above reality itself is being pushed to a new level with this judges decision, even to allowing a confused five year old to make their own choice as to their own sex way too soon.

Rich's first statement has some misunderstandings. Feelings are of the utmost importance and telling anybody they don't feel a certain way is lunacy.
Blaming it on hormones is a cop out, it is the emotions themselves that create the hormones. Girls and boys usually are raised differently, boys are wrongfully taught that to show feelings is a sign of weakness. And in my experience this is the primary reason men on average have shorter lifespans than women.

Men are just too tough for feelings so they repress and dissociate, which will in turn cause illness.

There are only 2 things in life. Thoughts and feelings, that is all we can take with us when we pass on. Ignoring feelings can also lead to mental illness.

Yes, people can have "wrong" feelings, but these feelings are based upon some past unpleasant incident, such as with phobias, being an unreasonable fear based upon an often forgotten real trauma. Feelings are VERY REAL, but they are not logical and cannot be explained away with reason.

The problem is believing feelings to be some sort of esoteric devine message, kind of akin to obeying schizophrenic voices. But feelings are NEVER WRONG, they are telling you something is amiss within. (I won't bring intuition into this rebuttle, that is something for another day).

To be both physically and emotionally healthy. all feelings less than Christlike peace, joy and love must be cleared. Expressing feelings is one way of doing this, though it is not all that efficient. There are better ways to treat less than ideal feelings and those that believe feelings are not "right" are out of luck to live a long happy and healthy life.

A "judge" doesn't have authority to dictate the gender of any young child. The child has no ability to "choose" their gender. This is so absurd. That is decided when the child is born and no one can change it. Transgenders are only genital mutilators. There's no such thing as choosing or changing a gender.

Governments have no authority over natural law. If a government passed a law banning gravity, I'm sure nature would not be impressed. This article just goes to show how sick and twist the government officials have become. They have no moral authority, and they know it. Their purpose in life is to abuse the people in the most unseemly way. Governments should be abolished and the people should simply use natural law in its place.