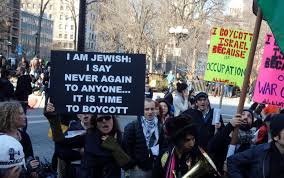 (left, BDS movement skirts political gridlock.)
Israel's barbarous treatment of Palestinians is making many "progressive" US Jews join the Palestinian "BDS" movement (Boycott, Divestment & Sanctions.) Here, CUNY Professor Peter Beinart predicts this fissure will become the focus of  American Jewish politics.
It may be time for Mossad to rally US Jews with some "anti Semitic" false flag attacks. Nothing like a pogrom to keep the "lesser brethren" in line.
Latest- Jeffrey Goldberg predicts civil war between US & Israeli Jews over Apartheid State
----------- Netanyahu Preparing Offensive to Combat Boycott Calls
by Peter Beinart
Abridged by henrymakow.com
The news that [billionaire GOP funder] Sheldon Adelson will this weekend host a secret conference for Jewish groups aimed at countering the boycott, divestment and sanctions movement is yet more evidence that "pro-Israel" activism in the United States is entering a new phase...
BDS is growing because the Israeli-Palestinian peace process has died. For six years, Netanyahu has publicly rejected the idea of a Palestinian state along the 1967 lines, with land swaps.
Most Palestinians have lost any faith that negotiations with Israel can bring them a state anytime soon. And Mahmoud Abbas' failure to end the occupation, or stand for election, has wrecked his legitimacy among Palestinian activists. 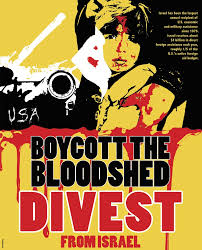 The BDS movement has entered this breach. It offers Palestinian activists a way to bypass their divided, corrupt, ineffectual politicians by taking the struggle against Israel into their own hands. Its three planks -- an end to Israeli control of the West Bank and Gaza Strip, equality for Palestinian citizens of Israel and the return of Palestinian refugees--offers something for each of the three main Palestinian populations (those in the occupied territories, those inside Israel proper and refugees) and thus unites a divided people.
As a nonviolent movement that speaks in the language of human rights and international law rather than Islamic theology, the movement also attracts progressive allies who would never join a movement defined by suicide bombings and the Hamas charter. 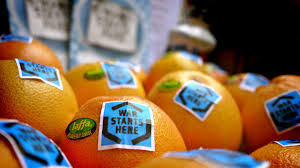 Already, BDS is changing the landscape of organized American Jewish life. First, it is making Washington less important, which may make AIPAC less important. AIPAC's power rests on the relations between its members and members of Congress. But the BDS movement bypasses Congress in favor of universities, liberal Christian groups and trade unions, where it can gain a more sympathetic ear.
The response has been a gold rush among American Jewish groups seeking to lead the anti-BDS charge. In 2010, the Jewish Federations of North America and the Jewish Council on Public Affairs created the Israel Action Network to combat Israel's "delegitimization." As the Forward notes, AIPAC, the Anti-Defamation League and the American Jewish Committee have all recently "set up operations geared at students" largely to do the same thing. In Washington, AIPAC still dominates. But in these new arenas where the BDS struggle will be fought, AIPAC is just one Jewish group among many. 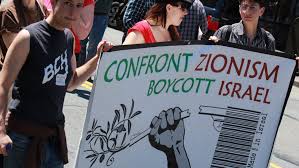 The second consequence of the rise of BDS will be to increase the prominence of Jewish Voices for Peace. Right now, many establishment-minded American Jews don't know what JVP is. In their mind, J Street still represents American Jewry's left flank. But as the only significant American Jewish group to support BDS, Jewish Voices for Peace will grow in prominence as the movement itself does.
Already, non-Jewish BDS activists cite JVP as evidence that American Jews do not monolithically oppose their cause. The more that mainstream American Jews hear this, the more enraged at JVP they will become. How exactly that rage will express itself, I don't know. But as JVP grows, its battles with the American Jewish establishment will make those of J Street look tame. 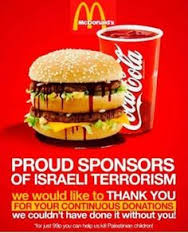 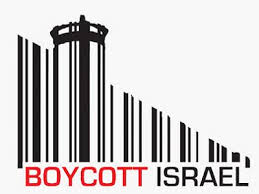 Inside the American Jewish establishment, the first response to the BDS movement's challenge to Zionism has been to cry anti-Semitism. But that response conceals a dirty little secret: that many "pro-Israel" activists haven't thought much about the tension between Jewish statehood and liberal democracy, and thus don't really know how to justify Zionism to an audience of skeptical, progressive non-Jews.
Justifying Zionism to liberals is not an impossible task. But neither is it intellectually or morally simple. And it will require establishment-minded American Jews to defend principles they have long taken for granted. Of all the BDS movement's consequences for American Jews, that may prove the most significant of all.
--
Related-  Netanyahu terms BDS Movement "Strategic Threat"
----------   Five CA Campus Student Unions Demand Divestment

There's nothing like a GOOD Jew. I've said it forever, both before and after coming to see the truth about the supremacism. But there's only one logical, moral, lawful solution here: "Israel" has to go out of business and give back ALL the land, because it's ALL stolen and everything "Israelis" have done with it is a disgrace.

No doubt the "Israeli" power mafia never expected to still have to be justifying itself and fighting off animosity in 2015 when terrorizing the original inhabitants off the land 70 years ago, but if it's right to let the Palestinians keep any of their land, they should get all of it. I seriously doubt that even a two-state solution will satisfy either side...... well, Israel is simply not going to tear down the gulag wall or stop what it's doing, ever, as long as it's Jewish enough to lust for more blood and more property.

Which takes us back to square one. Only a total pullout will work. Where "Israelis" go from there is not my problem, but the Jewish Autonomous Oblast -- almost twice as big as "Israel" -- should welcome them with open arms.

BDS only applies to industry within the "occupied territories". I never knew that until recently.

You'd think that would be a "no brainer" but apparently not, which makes me wonder if the whole BDS movement is a "feel good" Israeli intelligence operation that goes no where.

I cannot see how their can be a "jewish state". For it to exist means the indigenous mostly Arab Muslims must leave; be ethnically cleansed; or be by definition second class citizens ala South African apartheid. I have come to see the whole BDS movement as a bit of a fraud.

Still, inch by inch maybe American Jews will be dragged kicking and screaming into the bright sunlight of the reality that "Israel" and "Zion" and the "2nd Temple" reside in the heart, not in Palestine. If that cannot be re-imagined outside the materialistic interpretation of Scripture then it does not bode well for "Jews" anywhere.
---

People who boycott Israel are boycotting all products from Israel, not just occupied territories.
h

I, for one, have never understood what causes someone to self-identify as a Jew. There are so many variants of belief, often totally antithetical, among the people doing so that someone on the outside has to wonder what is the elemental glue that makes Jews recognize each other as such. If it is just the desire to enjoy a sense of being "chosen", and therefore separate from the mass of mankind, then this would be very sad.
--

It's a culture that has many good points as well as bad.