US Downfall Traced to Defeat of Christianity

"America is great because America is good, and if America ever ceases to be good, America will cease to be great." - Alexis de Toqueville
by Richard Evans
(henrymakow.com)
Is America using immoral tactics to fight unjust wars? I found part of the answer in a remarkable interview with a former US drone operator, Brandon Bryant, on BBC's HARDtalk (above.)
I thought it would be the usual 'gung ho' pep talk about America's great weapons, but the young man impressed me with his honesty, courage and conviction.  Brandon says drone warfare represented the most cowardly warfare ever devised. Although he took part in over 1600 kills, he felt sick about it because he could not be sure whether some were even enemy combatants.
He condemned the Presidential order to assassinate US citizen Anwar al-Awlaki who was killed by drone in 2011with another American who was purportedly editor of al-Qaeda's English-language web magazine, Inspire.  Bryant felt these assassinations constituted a blatant violation of the US Constitution - which says that US citizens must have a fair trial by their peers even when the charge is treason.  Obama simply ordered al-Awiaki and sidekick murdered by drone ten thousands miles away.
Bryant argued, "We're supposed to be the greatest nation in the world, and we do not live up to our own standards".
HOW DID AMERICA LOSE ITS MORAL GROUNDING? 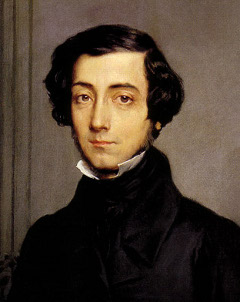 Comments for "US Downfall Traced to Defeat of Christianity"

The history of Christianity in America is a deep subject that really can't be covered in this article, so I said it's counterproductive to steer the conversation to a debate between whether American ethics were Christian or Freemasonic at the time de Tocqueville wrote Democracy in America. Though I say that to say America was a Freemasonic country then is to give the Lodge boys far too much credit.

In the 1840's they actually got driven underground for a while due to the Captain Morgan scandal.

"The safeguard of morality is religion, and morality is the best security of law as well as the surest pledge of freedom."

They have discredited any form of religious belief in the eyes of the majority, therefore any form of morality is irrelevant. Many things that are "normal" these days would never have been tolerated a few centuries or even decades ago. All sorts of perversions that were once punishable by death are now seen as virtuous, while morality and religion are old fashioned, superstitious, and discriminatory. Freedom is no longer a right, but rather a privilege enjoyed by very few people. It's not about right or wrong, but what you can get away with.

I found it interesting this man called himself a "coward" and the idea of drones is a "cowardly war." However, I doubt that most men do not question the morality of joining a military, which has imposed communism upon most of the world. The policy of sending troops all over the world fits in with the Illuminati agenda which is evil and communist. All war is cowardly and rarely is it ever justified. War serves the interests of the people who make the weapons.

The constitution is a bunch of nonsense put there by people to mislead the public. The Bill of Rights looks good on paper; but try using it and see what happens. These documents are a part of the problem in that they give a sense of false security to the public. Documents are worthless, but the good behavior of the people is where the real value to mankind resides.

The big problem with the people in military, is that they are tormented by their own consciences, and no amount of antidepressant drugs, booze, or drugs is going to take away the pain of their bad actions. No one can avoid the pain of the conscience.

War goes against the natural order as a way of solving problems. Sure, self-defense is one thing; but spreading our nonsense all over the world is another.

The strength of any "nation" will be the ability of the people to stay within the natural order that God created; war does not fall within those boundaries.

The latest article is a very great article. I have visited the east, west and lived for a long time in the south of the US. I can only really say that this sense of religion is more prevalent in the south. The east is pretty much a libtard ghetto, where people are just the typical brainwashed zombies.

In the west, the greatest amount of time I spent in Las Vegas (also in LA, but only for a day). I would not base my overall decision of the west on Las Vegas to be fair, since it is Sin City for a reason. I assume that the west is probably similar to the east.

Before I moved to the US, I was not a particularly faithful person. I believed that there was a God, but I did not identify my idea of God with that in the Bible. I really got exposed to the Bible when I lived in the south, and my faith gained a big boost after I lived in the south. The family I lived with in the south told me that they used to have another German student who lived with them for a year, and he became a devote Christian when he returned to Germany. He was very fluent in the Bible later on, to which he was never exposed to while he lived in Germany.

The US is really a special country, and I am sure it has enlightened and awakened many people spiritually who came over, thinking they would just be there for the fun. One can really tell that the spirit of God was the engine of US society.

In the old American society there was little disconnect between Christian ethics on paper and daily living. I remember when it didn't matter if you were Christian or secular in America, the ethical norms were still consistent with the Beatitudes*. People didn't always live up to those standards, but most everyone respected those ethics.

In our time the word "Christianity" has come to conjure images of grotesque televangelists and obsession with prophecies and magical thinking. It also conjures associations of 'intolerance'.

What nobody seems to notice is that the orgasmic victory of 'tolerance' typified by gay parades and the rest of it, was only possible in a Christian world. The irony is that as soon as they've programmed the last traces of Christian ethics out of the children, the future will be a horror show.