Crisis Report from a Greek Island 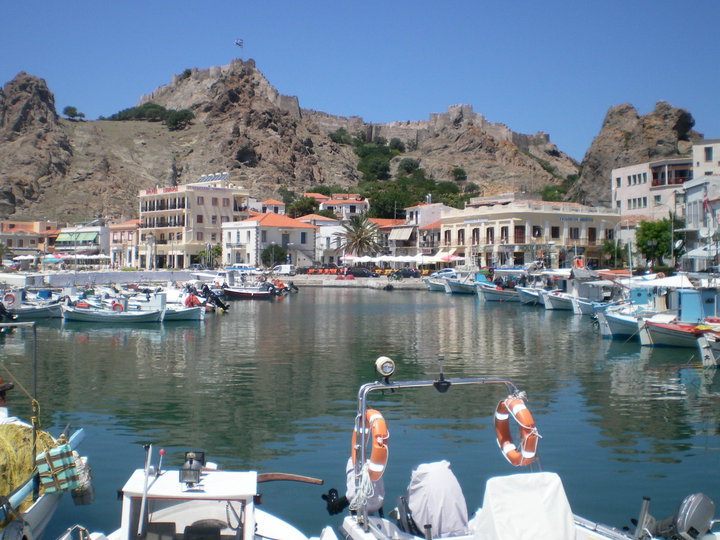 (Left, Lemnos Harbor)
Ann Diamond reports that
many people are suffering
due to the debt crisis. Even
the weather and the soil
cannot be relied upon.
by Anne Diamond
(henrymakow.com)
It feels like any other summer, people are strolling in the plateia, yachts in the harbour, restaurants opening. All is calm on the surface, but this past week Greeks were finding new places to invest their money: flower pots, mattresses. My Greek friend "Zorba" was in the port and spoke to a woman who said 'Havent you taken all your money out of the bank yet?"
Crisis: a greek word meaning "decision".
The far-left government of Alexis Tsipras had just declared the Greek debt to the IMF Troika 'odious' and 'illegal' meaning the country was headed for default. So last Friday 'Zorba' stood in line to withdraw his paltry savings, and now they're in an empty dog-food can in our kitchen.
Rumours were flying that when (or if) the banks reopen on Monday, there will be no more Euros, and the country will be back on the drachma. The European bankers were sharpening their fangs. Monday came - that was this morning -- with news of a reprieve. A late-night, last minute, â‚¬18 billion bailout offer could postpone disaster for another six months.
After 6 years of dire news, there is little panic, just a country sailing slowly into the sunset.How many more cruise ships - or last-minute bailouts - will appear on the horizon before Greece sinks? 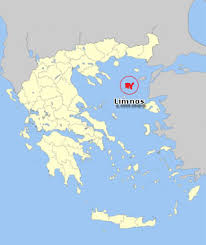 We live on an acre of land next to an ancient fortress known as the Castro, on a northern island called Lemnos which is opposite Troy, 50 km east on the Turkish Coast. Getting here this time was a problem as the ferries keep breaking down. Lemnos has been a strategic island ever since the Trojan War and more recently was a stepping off point for the Gallipolli campaign, with troops stationed here en route to the battlefields of the Crimea.
Now the island is also reputed to be the centre for electronic warfare in the Aegean, and 'Zorba' tells me he has seen one of the main underground facilities near the mountain village where he owns land on the slopes of an extinct volcano.
'Zorba' says Alexis Tsipras (the new PM) is just another Zionist agent destroying the country.
People are suffering -- shops are closing. Two years ago, the owner of a cyber cafÃ© (whose Russian waitresses moonlighted as prostitutes) shot himself because he could no longer face his debts.
The local grocer can't pay his electricity bill and has installed a noisy generator. He owed so much money to creditors, they came around to his store and forced him and his elderly brother to take off their trousers and be paraded around the port with ropes around their necks in broad daylight, in front of the men in the cafe neon.
The old-line Communists no longer stage many rallies with speeches and playing of old Theodorakis tapes on the loudspeaker -- they have been replaced by the new, far-left Syriza party which won the election back in January. Many new cars speed on the roads, allowing people shop at a new chain supermarket that offers cheap prices.
Not long ago, the baker shut down his oven in the market because he couldn't afford the gas bill. We can no longer use his oven for our household baking - which used to be a tradition in Greek villages and towns.
Because the electric bill in Greece often arrives with a property tax notice, 'Zorba' cancelled his account three years ago, and installed a basic solar system - enough to run a refrigerator in summer for 8 hours a day. At night we switch it off. Much of our food comes from our garden, including edible weeds (purslane and amaranth).
NATURE
Nature used to be our friend, but Greeks can no longer even count on their weather.This year has been much wetter than usual. Destructive windstorms are also more common. 'Zorba' says this is because the Zionists are trying to destroy this year's food crop and further impoverish Greece. He sees geo-engeering and GMOS as part of that same agenda. Unlike North Americans,  Greek TV and radio sometimes discuss chemtrails and other conspiracy theories.
We have also seen the effects in our garden of GM seeds which produce food for one year only, then become sterile. Traditionally, on this island, people save (and share) seeds but that has become risky with the invasion of hybrid plants and Terminator seeds.
Lemnos (which used to be self-sufficient in agriculture) is far enough from Athens that it remains a laid-back easy-going place. There are still shepherds here:  one told us he can't pay his mortgage. A few years back, he made the mistake of taking out a loan. "What will happen? Will the police come and take away my house?"
The island also has its drug traffickers - not surprising since young people have no jobs, and the police are corrupt. We know a photographer and citizen journalist whose store front was attacked by unemployed kids. The police did nothing, and the kids involved turned out to be a gang of police informers. For complaining, he was place in a psych ward. drugged and held for a month.
I spoke to an American friend who has been living on another island for several decades. When she arrived in 1972, the drachma was worth almost nothing, and life was incredibly cheap. At 76, she has no pension, and a house but the rent consumes almost all her tiny income. She told me she got through last week by fasting for three days. 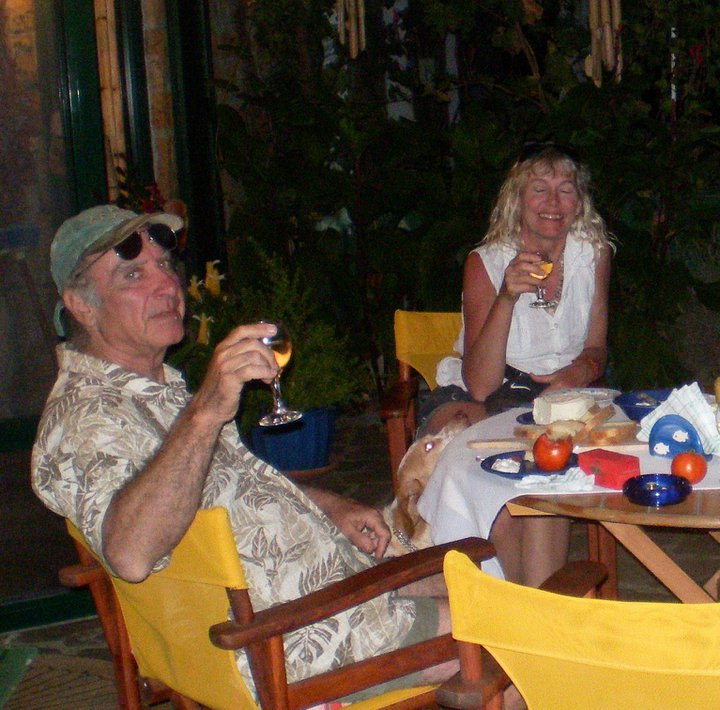 As for Zorba and me, (left) we have a garden. Monsanto has made inroads here and you can't depend on other plants -- we have seen strange hybrids etc. and even though we have honey bees, we're still not sure about this year's cucumbers. This week I made purslane pesto, purslane stirfry, purslane with rice. And dolmades, from leaves from our grapevine. We are also growing lots of beans this year because you never know when supplies might run out. Today I'll probably make potato salad with beans and purslane, which we'll wash down with retsina and ouzo.
Forty years ago, when people were poor and the drachma worth little, there was the consolation of a way of life that had existed for centuries." Now they ask" "How are things in Canada?" I say our banks are strong, and we are living on dirty oil.
"The party is over" is a phrase you heard often a few years back, when new taxes were announced every week. Greeks would be taxed for having children, making their own olive oil, or growing vegetables, in addition to the new property taxes which could double if left unpaid. There was no end to the Draconian measures the right wing government introduced to please its European lenders.
I was here the night Syriza won the election back in January. As the votes were being tallied on TV, a fisherman walked into the harbourside restaurant with a basket of sardines and called out "These are for Alexis Tsipras!" - people laughed. It made the results seem all the more heartwarming. Later I saw the â‚¬60,000 sonar device that locates schools of fish so he can eke out a living in the depleted sea.
If Greece returns to the drachma, will it go back to being the way it was when I first came here 35 years ago? Not likely. It isn't only Greece that has changed -- the global pursuit of wealth has eliminated the earthly paradises by devastating the eco-systems that made them possible
.
We have a New Age friend who claims by 2018 we will all be living in the 5th dimension -- according to her, we will have no bodies thus no need for food or money. Which is a good thing, since the money has gone there already.
As for the purslane - we still have tons of it...
I forgot to mention the beaches: the best in the Aegean.
----
Photos by Helen Grubner

Comments for "Crisis Report from a Greek Island"

This is an example of how economic conditions in cities, states and countries throughout the world are slowly falling apart. I wrote about this in my book, The End Times Passover nearly 30 years ago. Folks called me an alarmist, a heretic and an opportunist. I told them "No, I'm just a servant of Christ trying to alert my fellow disciples."

Thanks, Henry, for the Greek update from Ann Diamond.

She's a treat to read. Abel Danger compiled some strong material regarding Greek "debt" â€“ but now it looks like Tsipras is attempting to sell out the country to prop up the euro? Disappointing if so.

Here is what I have been reading:

â€œThe father of Alexis Cipra, Pavlos Cipra, died in 2012. He was a billionaire with a direct link with the Mossad, he was the father of a slave BHL entrepreneur in Africa where he was trafficking in Africans. He sent dozens of Africans in Greece in order to exploit them, giving them just enough to survive in its construction companies and public travux.
The family business â€œSKAPANEAâ€ was responsible for all major public works in Greece since the junta until today, construction / restoration of Orthodox churches through broadcasting. Like the Italian Mafia, the other companies have to pay a percentage to the â€œfamilyâ€ if they want to survive. â€œ [6] â€“ source

Yes, you read that correctly. I have been finding people in Greece saying that Tsipras is actually â€œCipraâ€ and is of Jewish blood.

All the "governments" of the world are communist. The style from country to country may be different, but the substance is always the same: communist.

Communism is intended to destroy true competition and to destroy all that is good about living. It ruins the local customs and cultures and it constantly persecutes those who would dare to speak up against it.

Central banking is one of the ten planks of the Communist Manifesto. The main problem with the banking system is usury/interest. Any monetary system and uses interest is doomed to eventually fail. The reason is simple: it doesn't work. All anyone has to do is to look at it.

Maybe the best thing to do is to tax a commie. Every time they come around, just tax the snot out of them. Tell the commies that their economic system is too destructive and simply tax them.

If they come around to tax your for growing your own food, just turn around and claim a tax upon them. They can call it the Commie Tax. Then, you can ask for their authority to tax which they will not state to your face. You can then tax them for twice what they asked for. You could really have fun with this.