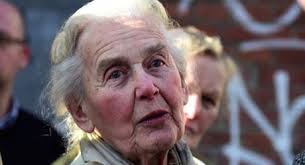 (left, Ursula Haverbeck)
The German government broadcaster
gave this old Nazi warhorse a platform
and then raided and ransacked her home
because they didn't like what she said.
Disclaimer: I disagree with Migchel's Revisionist stand. I don't believe the Nazis would round up Jewish children, the old and infirm in order to provide them with room and board. They wouldn't offer to ransom Jews from country club conditions in exchange for supplies and 10,000 trucks. Nonetheless, the truth can withstand scrutiny and I object to persecution of "Holocaust deniers." However, I do not intend to rehash the subject here so do not send arguments one way or another.
by Anthony Migchels
(abridged by henrymakow.com)
In March historian Ursula Haverbeck made history with a stunning interview with ARD, the German public broadcaster on April 23.
She denied Auschwitz was a death camp and said the holocaust was "the biggest lie in history." Only 500,000 Jews, not six million died in Nazi camps, and these mostly from disease. She told the truth about the Holocaust before millions of shocked viewers, and did so in a splendid manner. Relaxed, informed, determined. A real lady, your typical grandmother. Intelligent, energetic.
It was a big risk by the ARD, giving the 'enemy' a platform. Of course they presented it with the ominous warning 'some never learn', but still: Revisionism on mainstream TV in Europe, let alone Germany had been anathema.
Mrs. Haverbeck was fully aware of the risks and in late May the dangers became real: dozens of fascist/communist pigs from a German 'anti terrorism' (terror) squad invaded her home and thrashed ('searched') it.
For the time being, she's still free. But she's facing five years in jail.
There can be little doubt that giving her airtime was a huge miscalculation by the German State and its proxy the ARD. The cat is out of the bag and in Germany's underground, Revisionism is spreading. Ursula Haverbach:
"It becomes clear that the Holocaust is the greatest and most enduring lie in history. It was needed in order to finally complete the centuries-long struggle for world domination by the chosen people - that world domination was once promised to them by their god Yahweh and they believe in that promise firmly, it was their conviction. Whether we call them Zionists, Khazars, oligarchs or globalizers, it is the same. World Wars I and II were merely a preliminary stage for this achievement...Â»
At the rate things are going now, it'll be only a few more years before the Holocaust lie becomes unsustainable. Undoubtedly the Jews are hoping to bury it once and for all in the chaos expected in the years to come.
As a young girl, Frau Haverbeck, 86, who, as a young girl, lived through the horrors of the ethnic cleansing of Eastern Prussia in 1945. She's the widow of Werner Haverbeck, who was a committed National Socialist during the war and a nationalist, christian and anthroposophical ('extreme right') campaigner thereafter.
She is a member of a network of Revisionists in Germany. The best known among them are Ernst Zundel, Germar Rudolf and Horst Mahler, who is currently serving a 12-years sentence for 'Volksverhetzung' ('inciting popular hatred') and Holocaust denial.
Holocaust denial is illegal in Germany and several other European nations. The German State especially, clamps down viciously on all that dare to speak their mind on the issue. Recently, Sylvia Stolz was sent back to prison for 20 months for a speech she delivered in Switzerland. Stolz, who is married to Horst Mahler, had already served more than three years behind bars for the 'crime' of defending Ernst Zundel, who was convicted to five years in jail.
In France, Vincent Reynouard was sentenced to two years in jail in February this year. This was during the 'Je Suis Charlie' mass psychosis, with millions of French 'celebrating free speech'.
But Haverbeck, in the interview, cites extensively from the camp records of the time, detailing the diet and medical requirements for the inmates. These suggest the prisoners were quite well taken care of.
The notion that an 86 year old lady like Ursula Haverbeck deserves prosecution, let alone incarcaration, simply for speaking her mind on this most crucial of historical issues, just shows the utter moral bankruptcy of the German State, International Jewry and their many lackeys in the Academia and Media.
Ursula Haverbeck's basic message is simply that it's time to end this unreal defamation, weighing so heavily on the German people's soul, and to allow them to mourn, at long last, their many dead.
--------------
First Comment by Dan:
I see nobody wants to touch this one with a ten foot pole.     I'll just say it's obvious the German media and Panorama set the woman up so they could make yet another example out of her.
When an old lady's memories and questions are against the law, it raises suspicion that powerful interests have something to hide. She's right that if the Holocaust narrative can't pass the serious historical inspection applied to everything else, then "the whole post-war political system will fall apart, if that is questioned".
'Holocaust denial' is a misnomer.  Nobody denies Jews were persecuted and murdered, or that atrocities weren't committed.
No one ever questioned the number of Jewish civilians mass murdered in the  Babi Yar Massacre in Ukraine.
I believe the 'denial' laws are a desperate attempt to protect a 70-year-old coverup of systematic Allied war crimes perpetrated by the US and UK during the last 100 days of the war through July 1947. These include the firebombing of German cities for no reason other than they were full of refugees fleeing the advancing Soviet army; the Morgenthau Plan, Operation Keelhaul, 'Eisenhower's Rhine-Meadows death camps', for starters.

I am really surprized Migchels has no clue what was Rudolf Steiner's anthroposophical society.

Being clueless, he is misinforming by stating the society was extreme right when it was vehemently attacked by
Dietrich Eckart, and banned after 1933. Their philosophy was contradictory to the idea of race upheld by
national socialism.

can't say if 6 million or 60,000 Jews were killed, I really can't seem to trust any of the documents I have seen.

However my late mother was an eye witness to Nazi atrocities. She witnessed mass executions. She lived in The Hague, Netherlands as a young mother and risked everything hiding Jews and men of fighting age. The Nazis conscripted all able bodied men to fight on the eastern front, which for many was a death sentence.

She saw the Jews being rounded up. All that were caught never returned after the war. One Jewish MD was so respected that his apartment was left unlooted for the duration of the war.

The sensational title is misleading, Utilizing the "Nazi" adjective as a pejorative supplants in the mind of readers a negative connotation. It should simply say "Grandma 86, Faces Jail Time for Holocaust Denial"

About 40 years ago I read a report in an Ottawa newspaper that the leader of the Communist Party of Canada was denying that the Bolsheviks massacred people by the millions in the Ukraine in the 1930s, in what Ukrainians know as the Holodomor. Although to say I was skeptical would be an understatement, I was curious to know what evidence he would advance in support of his contention. Even if he had been intentionally lying about the facts, I would never have thought he should be charged with a crime. And he wasn't. However, the legal consequences for him would probably have been serious if he had made a similar assertion about the Holocaust.

It's a devilish world in which someone can say whatever negative thoughts they have about Jesus Christ without legal consequences, and that is certainly their God-given right, yet be imprisoned for voicing their opinions about history.