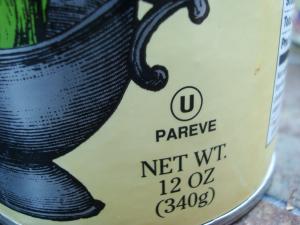 (l. It's a battle to get GMO labels, but kosher no problem.)
A reader believes that the public is
subsidizing orthodox Jewish institutions by
the fee manufacturers pay for the
kosher symbol, which is meaningless
and constitutes a tax.
Orthodox Jews make up 50% of British Jews (150,000), 25% of Israeli Jews (1,500,000) and 13% of American Jews (529,000.) Most secular Jews dislike them and are not kosher. Where does this minority within a minority get the power to intimate big corporations and government, which should outlaw this racket?
"Ronald Smith" is a reader who lives near Montreal.
by Ronald Smith
(henrymakow.com)
Is Kosher...Kosher?
In 1987, Rabbi Schulem Rubin, an Orthodox rabbi from the Bronx said: "Kosher doesn't taste any better; kosher isn't healthier; kosher doesn't have less salmonella. You [cannot] eat a Holly Farm chicken which sells for 39 cents a pound on sale, and next taste a Kosher chicken selling for $1.69 a pound, and tell the difference. There's a lot of money to be made! ''
According to a 2002 article in La Voz de Aztlan ,  "Major food companies throughout America actually pay a Jewish Tax [to Rabbinical Councils] amounting to hundreds of million of dollars per year in order to receive protection. This hidden tax gets passed, of course, to all non-Jewish consumers of the products. The scam is to coerce the companies to pay up or suffer the consequences of a Jewish boycott. Jewish consumers have learned not to buy any kitchen product that does not have the (U) the (K) and other similar markings... 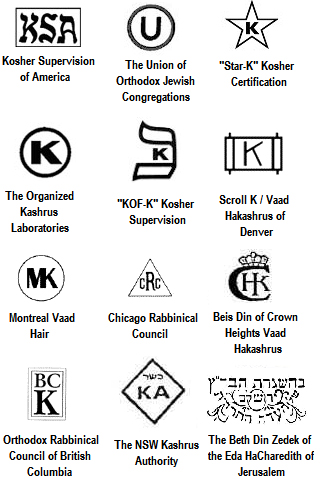 "It is estimated that the Union of Orthodox Jewish Congregations, which manages the (U) symbol protection racket, controls about 85% of the "Kosher Nostra " certification business. They now employ about 1200 Rabbi agents that are spread through out the U.S. Food companies must first pay an exorbitant application fee and than a large annual fee for the use of the (U) copyright symbol. Secondly, the companies must pay separate fees each time a team of Rabbis shows up to "inspect" the company's operations. Certain food companies are required to hire Rabbis full time at very lucrative salaries...
The amount of money that the non-Jewish consumer has paid the food companies to make up for the hidden Jewish Tax is unknown, but it is estimated to be in the billions since the scam first started. The Orthodox Jewish Councils as well as the food companies keep the amount of the fees very secret."
The  Bnai Brith ADL maintain this is an anti Semite slur: "The cost to the consumer for this service is a minuscule fraction of the total production overhead; it is so negligible in practical terms as to be virtually non-existent. A May 18, 1975 New York Times article reported that the cost to General Foods' "Bird's Eye" Unit, for example, is 6.5 millionths (.0000065) of a cent per item. Furthermore, a representative of the Heinz Company has said that the per item cost is "so small we can't even calculate it," and that such labeling actually makes products less costly by increasing the market for them."
MY  EXPERIENCE
Over the past few years I have contacted some food producers and/or distributors with some questions regarding the kosher symbols which appear on their packaging. Some of the replies were rather surprising and very informative. Here are a few examples:
Maple Syrup
I wrote to a local maple syrup producer asking them why they agreed to have their products 'kosher certified'. The answer was very honest: 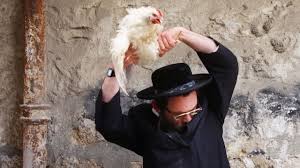 ''If we did not have a kosher symbol on our products, the food retailers would refuse to put them on their shelves''
Did you say blackmail?
Bathroom tissue
This is probably the biggest and the most ridiculous aberration. The day I discovered a kosher symbol ( KSR) on a package of bathroom tissue rolls ( toilet paper! ) it convinced me that this kosher certification was nothing but a money making racket. 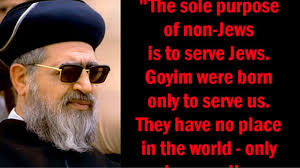 An employee of the Leclerc Cookie Company candidly mentions the cost of the 'kosher certification' of their products at about 5 minutes of the video made by TVA: $25 000 / $30 000 annually plus other fees not mentioned. He also states that the food chains would not accept his products without a kosher certification! Definitely blackmail as far as I am concerned.
At about 6:40 minutes the Brasseur Transport Co. also admitted a cost of $35 000 plus additional costs of $ 15 000 to have their trucks 'blessed' by a rabbi.
The reporter does mention that most other companies refused to divulge their additional costs. Consequently, we will probably never find out the total cost of this whole 'kosher certification' business
The two examples should give us a good idea and if we multiply that by a few thousand other companies the revenues from this racket must be mind boggling.
---
Related-
Brother Nathaniel- What's Behind the Kosher Scam?  "Kosher symbol is precursor of the
Mark of the Beast."
First Comment by AG:
I have known about the Kosher Tax scam for over a decade. There is hardly any food product without some kind of Kosher tax symbol on the label. When I found out about it, I was angry and complained to the manager at Trader Joe's in Southern California. A Jewess heard me and said, "you don't know what you are talking about." But she seemed pretty shocked that a Goyim (isn't it telling how Jews have a word for non-Jews?) dared to voice herself against the Jewish racketeering.
Imagine if every "Goyim" actually educated themselves and openly protested this form of extortion? But they won't. They won't because the same Jews who run the Kosher Tax scam, also run and control the media, government, and entertainment industry; so most non Jews have been 'stupefied' by television, movies, and the whores who run the U.S. Government (whores in the true sense of the word --people who have sold out their own souls, and sold out the American public in order to cater to the Zionists).
The general public also won't speak up because the Jews have successfully instilled fear into anyone who dares even think about saying anything "negative" about Jews --even if it is true, taking their money and killing them with it.

Comments for " Are Kosher Symbols Extortion?"

Regarding the Kosher Tax Hijack.... what if us non-Koshers boycotted anything marked as Kosher. Maybe then...then manufactures will ditch this nonsense.

Yes, extortion is the only word that possibly fits this racket and, for any goy American, it is a crime for which you will be thrown in prison for a long period of time.

The double standard for anything Jewish in this country is bought and paid for by wealth also extorted from the people by the forced use of federal reserve notes, which are rented at usury as the only way the people can make needed exchanges to stay alive.

I always wondered what the little u meant on virtually everything you buy at the market meant. On day while just cruising the "net" I came across an article on the Kosher scam. I simply could not believe the depth of infiltration the Jews had made into our food supply.

As with every frikin' thing else they control in America it is all about money and power. It is no different than the politicians, the media, the military and most all banking in this country. Everything is controlled or owned by the Jew. You are a nation of sheep America and Israel is your shepherd.