Jade Helm: Are Patriots Being Paranoid? 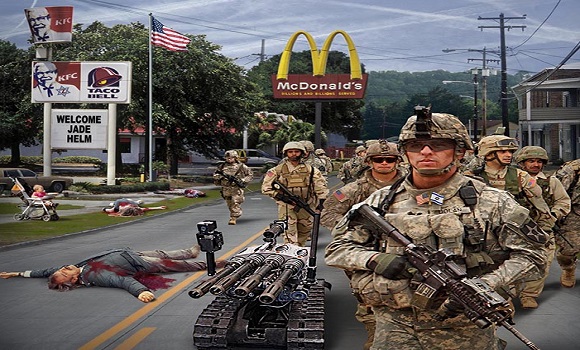 Ken Anton says Jade Helm is a trial run for extracting US dissidents/patriots and sending them to FEMA camps for rehabilitation or worse.
Makow: I don't think the Illuminati would want to
arouse a gun-owning population of 300 million. But
Ken Anton has compiled credible reasons for real concern.
Incident Thursday reported initially as an "active shooter" turned out to be a drill. No shooter. Soon we won't know the difference between invention and reality.
By Kenneth Anton
(henrymakow.com)
The government has stated that Jade Helm is just a 'Military Training Exercise' taking place in seven or more southwest states for just 2 months from mid July to mid September.
But many skeptics see this incursion by the military into domestic affairs as a prelude to martial law.
SPECIAL AREAS OF CONCERN
Under the Constitution, domestic military operations are banned by Posse Comitatus. Though there have been minor exceptions in the past, Jade Helm represents a dangerous new precedent. 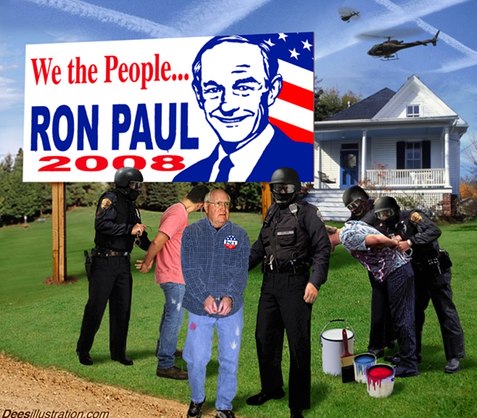 The planned training exercises include simulated extraction of citizens by special forces (who already have extensive real experience). More likely this is a trial run for extracting US dissidents/patriots and sending them to FEMA camps for rehabilitation or worse.
Two months of training exercises by military personnel is one thing, but massive movement of tanks, APC's, humvees, Mobile Command Centers and weapons storage containers have been reported. This mass movement of artillery to various sections of the nation signifies a permanent military presence.
From Slacker 614, massive convoy of military vehicles by train at Portland OR on 6/13/15.
FEMA and DHS Mobile Command Centers at Fedex facility in Texas - reported by Dahboo7.
Alex Jones Infowars: Marines Training to subdue citizens & herd them into FEMA camps.
Blackhawk Helicopters in active training exercises across the US. See video from Dahboo7
REAL GOALS OF THIS 'TRAINING EXERCISE'
1. Intimidate the public so they will accept martial law and gun confiscation
2. Testing the willingness of troops to follow orders, control and if necessary fire on citizens when necessary.
3. Not a drill at all but the initial phase of gun confiscation, extracting dissidents and population control. See Pete Santelli video.
4. Most likely, there will be a terrorist attack initiated by the new bogeyman ISIS. Or there may be severe weather -  floods, tornadoes, hurricanes; or bank shutdowns with limited ATM withdrawals, food and gas shortages creating panic. In any of these scenarios, the troops could serve as white knights to further condition Americas to martial law.
Dave Hodges of the CommonSense Show states that the 82nd Airborne and Special Operations Forces such as the Green Berets and Navy Seals will be a part of the extraction drill i.e. arresting patriots.
These arrests will be carried out under the NDAA which "allows" for the indefinite detention without 5th Amendment Due Process. Extractions will be carried out in the "drill" (and in reality) by Special Operations Forces such as Navy Seals and Green Berets.
Dave Hodges also refers to the 260+ military officers previously fired by Obama for basically not agreeing to fire on American citizens. Possibly foreign troops operating under the UN flag will seize private guns from citizens. In order to create the manufactured need to impose martial law, the President needs a pretext, a false flag event - most likely an economic collapse followed by food and water shortages.
According to Stewart Rhodes, Oath Keepers Founder, "Jade Helm is in part conditioning and vetting of the military to see who will and will not go along. I think it's also conditioning and assessment and vetting of the local politicians," he added. "Who raises questions? Who has any serious, meaningful questions about what we're doing with this exercise? They put their name down. I think they're figuring out who is loyal and who is not loyal and who is likely to go along, with the town councils and county commissioners as well."
Rhodes added "this is a different world we're in" because "we have a government that's made it very clear it considers veterans and gun owners and anybody who's a constitutionalist to be the future enemy."
TRAINING EXERCISE AS COVER FOR FALSE FLAGS
Should we listen to the skeptics? The Ruling Elite have committed major false flag operations while training exercises were used as cover. So be forewarned that another 'Military Training Exercise' could precede a major false flag or terrorist event.
Examples of such training exercises:
- A few hours prior to the Oklahoma City Federal Building bombing on April 19, 1995 by a large ANFO fertilizer bomb, an ATF bomb squad was seen patrolling the area. They claimed they were on an anti-terror drill. Curiously, no ATF or FBI agents normally working at the building were injured that day. And a judge received an earlier warning not to come to his office at the Federal building.
- While the "highjacked" airliners were heading toward the World Trade Center and Pentagon, on 9-11, NORAD interceptor jets were preoccupied with a training exercise for just such an event.
- The London subway bombings of 7/7/05: A training exercise by Visor Consultants was taking place in London concurrently as actual bombs were planted on subway cars and a bus by 4 Pakistan patsies in the exact same spots. The probability of this coincidence happening is incalculable. See video on the above.
- Boston marathon bomb exercises were underway when two pressure cooker bombs supposedly planted by 2 Muslim terrorists exploded at the race finish line. See this graphic rendition of the fake bombing hoax.
CONCLUSION
The War on Terror has now come home, as DHS, FBI and Police target patriots, veterans and dissenters. The next step initiated by Jade Helm will be extraction of those on the Red List, gun confiscation and Martial Law.
These themes are covered in the historical fiction book  'Popsicle Man' by Kenneth Anton which concludes with a surprise ending pitting Military Oath Keepers and Patriots against the Elitists and their minions.
----
Related- James Perloff- Take Threat of Martial Law Seriously

Comments for " Jade Helm: Are Patriots Being Paranoid?"

I am convinced the recent terrorist outrage in Tunisia was as fake as sandy hook ever was only with better on set management.

This has been an immediate objective of the Cameron set since the middle of the last parliament.

Look to the immediate news coverage of the "outrage"

One guy with "a gunshot wound to the arm" could be seen with both arms intact whilst simultaneously giving an interview to camera about it with only a blood pressure monitoring cuff on velcros wrapped around one of his arms to spare his blushes.

Why did it take "a whole week" to establish the names of the "victims who were Britons" obviously because it needed setting up people needed to agree to do "the right thing" or get blown away.

How can so many people not see this?

If it looks smells and tastes like its Sucks
Then it sucks.

One need look no further that search "news" and pull up the latest terrorist attack. Watch the abc News report to see the biggest swarms of cop and paramilitary vehicles you ever saw in your life.

The reporters and police and uniformed military spokesmen present this as if it's real. They won't tell you that THIS is a JADE HELM live exercise.

The public reaction is being monitored and analyzed.

That's what JADE HELM is all about. If we can resist the urge to always leap to conclusions and just pay closer attention to what they present as it unfolds, we'll raise the national awareness and IQ level by double digits.

This particular news report shows how they lie to us. IT'S A DRILL and they're reporting it as if it really was a spontaneous response to a real terrorist attack.

The media approaches this 4th of July, 'Independence Day' weekend with mixed signals of festive anxiety.

The only recent victims of martial law in America have been the law enforcement agencies themselves.

The police in Ferguson, Missouri and more recently Baltimore, Maryland were ordered to "stand down" and watch the arsonists and looters take care of their business while the law obedient citizens of the community locked themselves in their homes to protect their lives and property.

This is unprecedented in American History and Law Enforcement to have a "no response" while legitimate businesses like CVS burned down because the police weren't allowed to protect the fireman or the citizens.

The police did not shut the town down and impose martial law, the "goons" with the law on their side did.