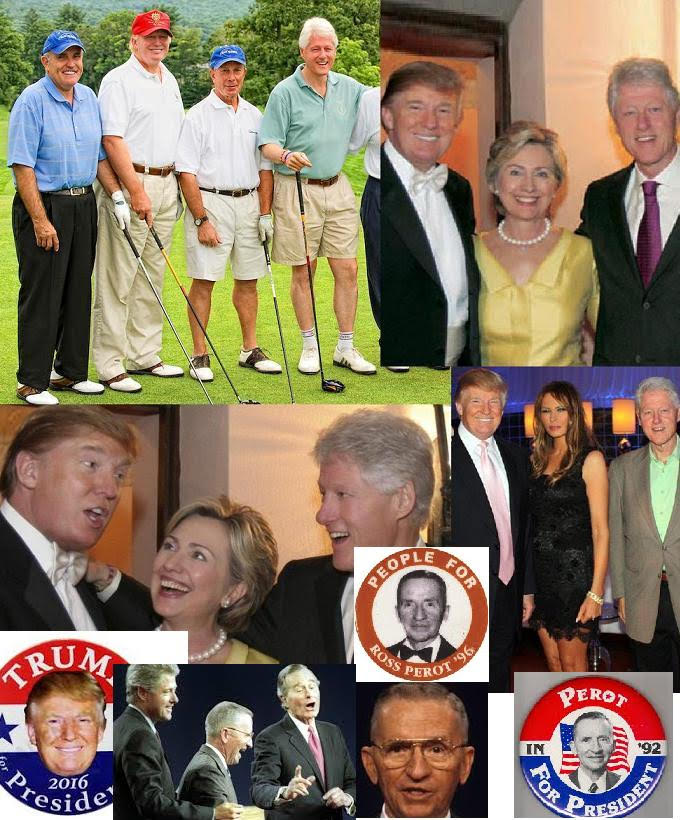 (left. political enemies or allies?)
Pictures tell the story.
Americans crave a maverick "outsider"
who will set the country straight.
The bankers are happy
to oblige.
Trump is as phoney
as HOPE & CHANGE
has proven to be.
Latest: Trump Threatens Third Party Run
by Dick Eastman
(henrymakow.com)
Trump is replaying Ross Perot's old trick to get Clintons elected -- phoney opposition to drain support from a real opponent.
Trump gave far more money to Democrats in the last three elections and he is very close friends of the Clintons.  Just as Perot entered the race in '92 and '96, Trump will draw away money, volunteers and votes from Jeb Bush.
In 2016, Trump is drawing money and support from other candidates in the field, especially the one non-establishment candidate not under organized crime control (Ben Carson.)
Clinton or Bush it is the same organized crime syndicate.  Look at the golf partners above  -- Rudy Guilliani, Trump, Bloomberg and Clinton.
Look at the picture from the 1992 presidential debate -- not only are the three good friends and Council on Foreign Relations members, but George W H Bush actually nominated Ross Perot to the CFR.
The body language, the lack of tension in the debate proved the whole thing was scripted and staged.  There was just enough Ross Perot to make sure that Clinton won, because the CFR and Bilderberg had tagged him to win, to transfer US middle class wealth to China through the international banks, Kissinger and Goldman Sachs.
In 1992, I was for Pat Buchanan -- but I saw that Perot and Alan Keyes both were run to drain Republicans from Pat in the Primaries.  I saw it then and even now very few understand it.
The winners always win through running phoney candidates chosen and packaged to draw off the support from the real populist threat.
---
Related-

------------ Zionists Use Donald Trump to Fix Another Election
----------- Trump and Jeb Bush- Compare Potential First Ladies
First Comment by Dan:
David Carroll: "the GOP needs to get it's shit together right now, or ya'll can start practicing saying "Madam President".
I have been astounded how many people I know that have fallen under Trump's spell just because he said some things they liked to hear.
Voters never learn.  Ross Perot and Ron Paul and others said beautiful crap the common man longed to hear.   These are not real contenders.  Trump isn't going to be President.  He's simply articulating the public rage which doesn't amount to a hill of beans because he's not in any kind of authority.  It's just HOT AIR.
The only causal effect of his rhetoric is to chase the Hispanics to the polls to vote for whomever strides on stage to tell them what they want to hear.
The public is always so starved to hear what they long to hear they'll overlook what scum these people are just to hear it.
(This is Presidential material?)

Regarding the Trump article by Dick Eastman, I can't let it stand that Buchanan is a degreed member of Scottish freemasonry. He may be a Knight of Malta, but that is far different from what commenter Tim P. accused him of being. Freemasonry at its core is anti-Catholic. and Pat B. is a traditional pre Vat-2 Catholic.

I have sent this article far and wide. People are so sucking into Trump, who has donated to Hillary and the dems. So has Chris ruddy, so good bye newsmax in my book (well, let's put it this way, it's the icing on the cake).

I have been saying that for a long time, Henry, and have been getting chastised for saying it by everyone, especially the Republicans who Trump gas fooled. Thank you for confirming my suspicions. Recall that Pat Buchanan did the same thing in '96. And both Perot and Buchanan were both degreed members of the Scottish Rite.

Henry perfect article on Trump; by Eastmanâ€¦.the whole world needs to read it and understand how these bastards play the gameâ€¦.total scam. And no bust so no prison timeâ€¦.EVER! And they participate in these billion dollar crimes against the people while young men languish in prison all over the world for petty drug crimes for years and yearsâ€¦..so fucked up.,â€¦..

Time will tell, but I think you are absolutely right with this one. For Tony B who noted in a quote, "Americans are too stupid to elect the president. 'We' decide who will be president," this is how they will accomplish it.

If the objective is to get Hillary elected, then it is important that Trump not win the Republican nomination, but rather that he run later as a third party candidate and have enough popularity to split the Republican vote into two smaller pieces, thus allowing Hillary to win with less than 50% of the vote. That's how Bill did it in 92 and 96. Trump has already indicated an interest in a third party run so we'll see.

Trump is just more window dressing to keep up the con. As an arrogant "Bilderburg" American ambassador told a relative of mine to her face, "Americans are too stupid to elect the president. 'We' decide who will be president."

There is no reason whatsoever to disbelieve that statement.

How do you know when a politician is lying? When they are moving their lips. What is happening in this election is that Trump is using legitimate issues on immigration and loss of jobs to frame and support his nonsense. While I happen to like what he says on economic and trade issues, I know that listening to him will distort my mind. I agree with Eastman that his candidacy is intended to distort the election and make people feel as if he could make some improvements to the government. But, even if Trump was the real deal, how can he keep putting lipstick on the communist pig?

Since most of the world's governments are communist, how would Trump deal with such idiots and morons?

People are having political orgasms over what Trump is saying and Ross Perot did the same thing which gave us the abomination called Bill Clinton. My guess is that he is there as a spoiler. However, since all of them seem to be liars, it doesn't really matter who gets elected. The lie is the main tool of Satanists. They cannot function unless they are lying about something. The upcoming campaign and election will be a massive dog and pony show. The Donald is a master salesman and entertainer who is very well qualified to host the show. Again, the main tool of these people is the lie. Listening to such nonsense is a complete waste of time.