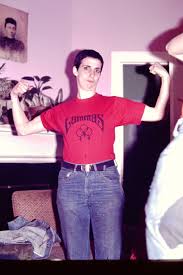 (left. This is what a lesbian looks like. It's hard to find a picture of an unattractive lesbian due to the Orwellian mind control exercised by Google. Mark says gay and lesbian activists are one dimensional, and not representative of gays as a whole.)
The illuminati gay agenda is a deceptive strategy we neither want nor consent to, such as the anti-family, anti-heterosexual, anti-God and anti-society policies.
by Mark C
(henrymakow.com)
I am a gay man fully awake to the New World Order plan. I am not a lone voice speaking out in the gay community. The majority of gay & lesbian people feel hijacked by external forces who use our legitimate concerns to undermine society.
The Illuminati Gay Agenda is not supported by most gays. This agenda is neither gay nor friendly to humanity; it's all about their plot to take over and coerce society in a Satanic direction.
The LGBT activists, militants, both Gay & Lesbian are a separate species to normal gays. Inherently nasty, they are driven by a victim identity mind-set, looking for perceived persecutions and corresponding revenge. Socially these individuals are one-dimensional and single-faceted people.
In contrast, I am like a cut diamond with many facets: gender, race, religion, culture, nationality, plus things such as skills, hobbies & interests, politics, philosophy and sexuality.
LGBT activists can talk only about sexual orientation and gay rights. Ask them about anything else; they have nothing to give and unable to listen. Remove sexuality and they are very sad and boring people. It's their whole identity! They have a problem relating to people normally. They are very insecure, self-hating and paranoid.
THE HOMOSEXUAL AGENDA
I am dismayed that sex education and gender confusion are taught to children from age 5. The illuminati want to sexualize children and groom them for pedophiles. Have these Cultural Terrorists considered the consequences of their actions?
Homosexuality is not the healthy natural norm. Society can manage with 2-3% gay population, but not 30-50%. Marriage must be between two different sexes; it is the foundation block for families and society. Targeting 5-7 year olds who have not mastered the alphabet to decide on 11 categories of identities to pick and choose from: Gender/Trans/Gay/Bi/Hetero etc. is a recipe for disaster. All these alternatives to male/female and heterosexuality are leading to population collapse.
GAY MARRIAGE
In 2005, Civil Partnership became law in UK. This has now been superseded by Same Sex Marriages. A Gay marriage is never equal since they cannot have children without sperm donors/surrogates. Biologically it is easier for Lesbians. 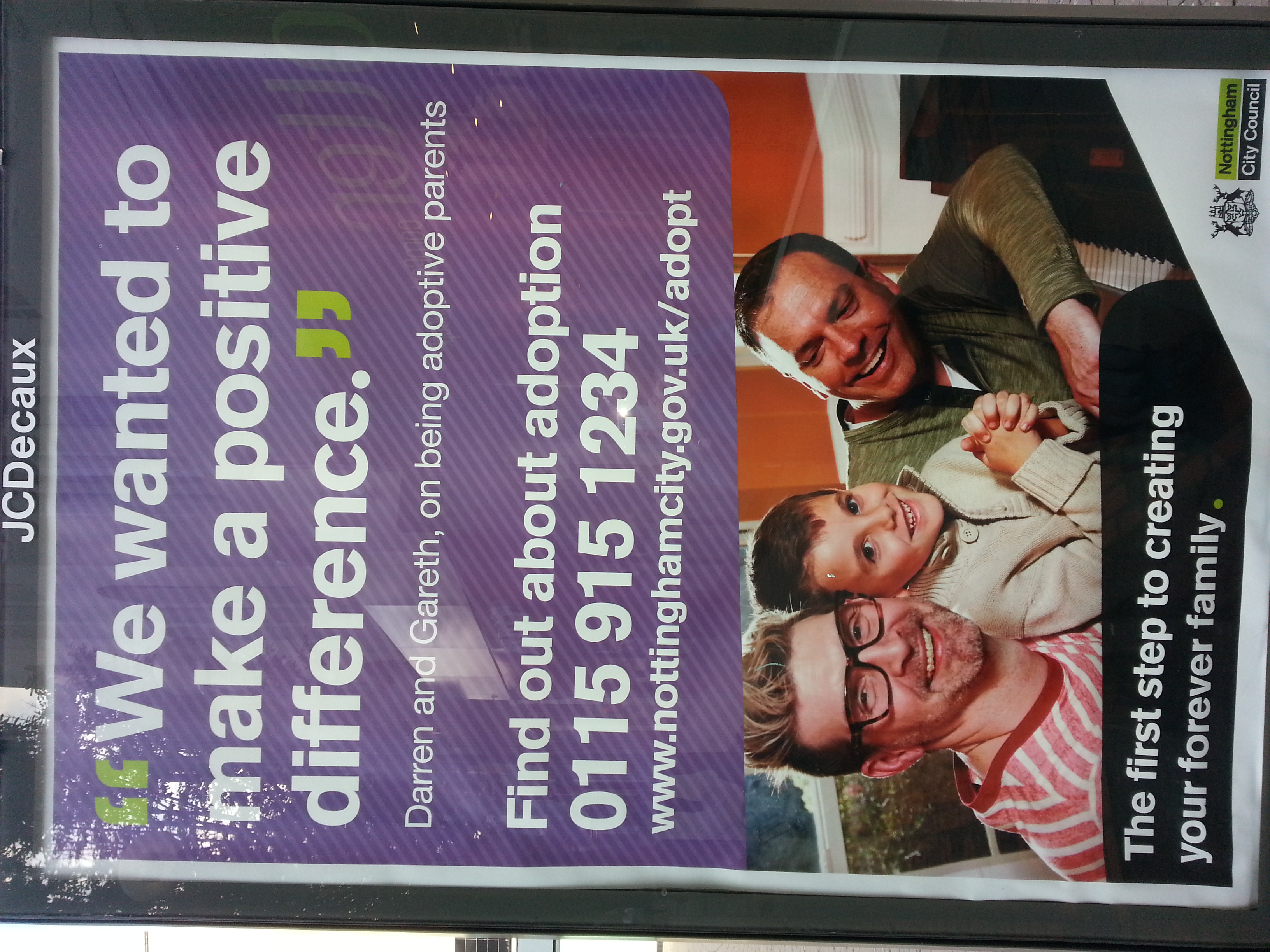 Gay married couples have increased pressure on social services by requesting children for adoption. In my city, billboards are advertising for families to adopt; the family depicted is two men and a 8 year old boy. Children are getting snatched by the state and placed in homosexual households. Statistically gay men as a group have a higher propensity to engage in paedophilia than rest of the population.
PERSONAL
I am in my mid-40s. In the early 1990s, I was indoctrinated by the Student Support Services at University. I had deep conflicts about coming out and received advice which conflicted with my deeply held Christian convictions from my upbringing.
I come from a family with a stay-at-home Mum, several siblings and a hard working father. I was counselled by a lesbian university counsellor who pressured me to tell my Mum, and go out and be promiscuous which I resisted. I sought solace from the Roman Catholic Chaplain who informed me about sadomasochism and reconciling faith with gay lifestyle. I got the blessing to go fourth and experiment.
I see my life in terms of being multi-faceted and the gay facet being irrelevant. I see my homosexuality for what it is -- an affliction that without careful tending can become a problem. I am content with my interests, friendship and I am integrated into society.
The gay scene, parades and online dating, meeting haunts, I avoid. There is very seldom any meaningful fulfilment in gay relationships or sexual promiscuity. Very few gays are compatible. I am more interested in fulfilment in personal friendship. My life blossoms from these being non-sexual/celibate.
Society needs to cure the illness of Cultural Marxism. The LGBT agenda has gotten out of control. It's time to restore sanity to society to make it great again. This starts with the family and honouring heterosexuality as the healthy norm.
---
First Comment from Dan:
Fully mature, well grounded men and women suitable for producing strongly bonded, unbreakable families and clans are the real target.   I'm sorry, that doesn't include homosexuals and lesbians despite their sincerity.  Nobody is more sincere than children, but no child is fully developed.  Unfortunately, neither are the majority of people in the West right now.
'Arrested development' is a phenomenon of post Modernity so well known that there was a television series by that name a decade ago already.    I'm not saying that only homosexuals and lesbians aren't fully mature and incapable of the kind of bonding necessary for successful families.   The fact is that the 'average family' and normalcy have become so degraded that many homosexuals and lesbians seem as mature and stable as anybody else.   What I am saying is, they're not.
We mustn't forget though, that homosexuals and lesbians combined are less than 2% of the American population, and America is the 'gayest' nation on earth these days.   That's one reason the media and government are magnifying them right now, because in reality any power they appear to have is what media and government allow them.    So it doesn't matter whether they reject GLAAD's 'gay elite' dictatorship of definitions, any more that it matters that 85% of heterosexuals reject it.   It's all a media illusion anyway.
The real purpose of all the hype is the sewing of gender confusion among the increasing population of single mother children.  Not to make them grow up gay, but to arrest their development, so that they never grow up.
The damage was already being done by the heterosexual 'sex revolution' of the 1960's.    Henry was right in 2001 in his article 'Playboy and the (Homo) Sexual Revolution'.   The name of the game was arrested development of males.
Every male stuck in a pubescent sexuality feedback loop is a broken link in the chain of procreation.

Comments for "Most Gays Reject Illuminati Agenda, one says"

In 1992 I spent a week at the San Francisco Zen Center in Haight-Ashbury where Harvey Milk lived and ran for office.This wealthy Zen Center's main activity by then was running an AIDS hospice in a neighbourhood that had been decimated by the AIDS epidemic. The gentrified streets were deserted except for ageing gay men pushing other gay men around in wheelchairs. There were notices of memorial services on every telephone pole. The bars and restaurants were empty and the atmosphere was of constant mourning, dread and death. There was even a popular restaurant decorated on the theme of a Mexican cemetery, with votive candles, skulls and funeral wreaths - it too was nearly empty. I hung around for a week, reading Camille Paglia, a lesbian who is critical of feminists. It was very obvious that the gay lifestyle leads to Death, and Haight-Ashbury perfectly demonstrated the hopelessness of it. I wonder who lives there now.

And the strangest thing: there was total denial. No one I knew talked about it. No one knew or cared that the Haight was like a graveyard smack at the centre of the "gay" movement. Total silence surrounds this deception.

By and large I agree with this article

I know some gay men and when I asked them what they thought about the Gay Pride marches taking place in most of the UK cities, they said they found them degrading and embarrasing and it made them want to: "go and stand with the Christians protesting against it"

I know several Lesbian couples who are actually very family orientated, have, or very much want children, and actively want to fit into society in a positive way. They want to fit into a properly functioning community the same way that most people do

Obviously there are serious issues with so many Gay men being peadophiles and there are issues with children being raised in such an unnatural environment.

But as the article states not every case is completely clear cut. The fact is that there are a lot of damaged people out there afflicted with homosexuality, but short of mass extermination, or exclusion, society has to find a way of dealing with them.

The only way to do this is to re-establish properly functioning communities. Then the communities themselves would decide on how to do this, in each individual case. That's common sense.

Whenever Illuminati Jews are involved in anything, that thing becomes a nightmare, because communities are no longer allowed to exercise self-determination, or common sense

Needed to be said. Its a complex issue - but I have gay friends who are very, very anti-nwo and dont feel the need to constantly force their own personal lives upon people

Most of us who read Henry's website didn't just fall off the turnip truck. Homosexuality is a curse upon the one who practices it or even considers it.

Homosexuality is a social dysfunction and it is extremely destructive to all people involved in it. Gays practice the Illuminati Agenda by just being homosexuals. And I am not surprised that it was a Roman Catholic Chaplain that taught him about Sado Masochism. Either way, these are extremely bad habits that should be avoided because all they accomplish is a destroyed life. If you only live once, then why destroy it? It would be better leave the homosexual inclinations behind and get married to a woman; starting a family.

Most of us have had our minds twisted by the "system" but at some point he's going to have to "man-up" and put away the immature and childish things such as being a homosexual.

If he considers homosexuality an affliction, then why be involved with it?

“Most gays reject Illuminati agenda” is more lgbtq nonsense. It’s the same old “gays are normal” garbage that has been swallowed by the world. The fact is gays are demented mentally. Even their physical characteristics change over time, in their face and body, not to mention mannerisms, speech, and overall demeanor. They believe their own lies and now expect the rest of the world to succumb to them as well. No thank you.