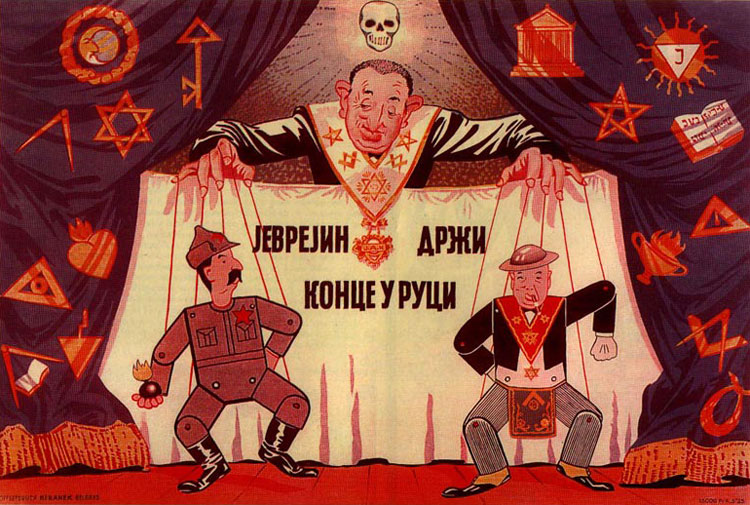 (Poster depicts how Cabalist Jewish bankers and Freemasons are behind both sides in war. This also applies to Hitler.)
"The Second World War is being fought for the defense of the fundamentals of Judaism."
--Rabbi Felix Mendlesohn, Chicago Sentinel, October 8, 1942
"World War II was a Zionist plot to make way for the foundation of the Jewish State in Palestine."
--Joseph Burg, an anti-Zionist Jew
"The Treaty of Versailles was hijacked by Jewish international financiers to create the necessary economic, social, and political and conditions necessary for Hitler to exploit."
Lloyd George, New York Journal American, June 24th 1924
"It is from us that the all engulfing terror proceeds. We have in our service persons of all opinions, of all doctrines, monarchists, demagogues, socialists, communists and utopian dreamers of every kind...striving to overthrow all established forms of order. All states are in torture... but we will not give them peace until they openly acknowledge our international Super government..."
Protocols of Zion, 9
Society resembles a satanic cult in many ways. One is that the rank-and-file is not privy to the real satanic hidden agenda. (Only the initiated are let in on the secret and allowed to advance.)
Similarly every institution and grouping within society follows this model. Thus, ordinary Jews and Freemasons are easier manipulated and sacrificed if necessary for the greater Evil.
(Disclaimer: I believe the Nazis were run by Sabbatean Jews (Cabalists) but I don't agree that Rosenberg and Heydrich were among them. Rosenberg's The Track of the Jews Through the Ages is one of the best books on Jewish history written. Heydrich was murdered because he was sincere.)
by Bobby English
(abridged by henrymakow.com)
The Nazi party was set-up, financed and maintained by Jewish International Financiers. Once Hitler was safely elected, the Bank of England offered credit to Germany, and after the Nazis successfully invaded Czechoslovakia, it released £6 million of Czechoslovakian gold to Hitler, which was deposited in London.
When you accept the proven involvement of Jewish bankers and their political representatives to have been very involved in the funding of the Nazis re- armament, you have only two possible answers:
Either Zionists are not Jews or the Zionists wanted a mass persecution of their own people.
Both these answers are true. Many Zionists are not Jewish. Those that were knew that to further the rise and creation of the Zionist State in Palestine, they required an irrefutable need. The gathering Nazi hatred and blame towards the Jewish people for the ills of the world which led to the mass persecution, gave the Zionist elite exactly that. 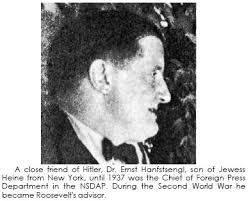 Ernst Hanfstaengl, a close friend of Franklin Roosevelt, was also a close associate of Hitler before the war, says he was warned by the Austrian writer, Rudolf Kommer that, "if any political party emerges with an Anti-Semitic programme directed by Jewish or half Jewish fanatics, we shall have to watch out".
Hanfstaengl wrote that later, after experiencing the influence that Alfred Rosenberg had on Hitler, he began to realize what that remark really meant:
"I thought back to Rudolph Kommer's remark about an Anti-Semitic programme directed by Jewish or half - Jewish fanatics - Rosenberg was distinctly Jewish in appearance, although he would have been the first to protest furiously if anyone had questioned his ancestry. Yet I used to see him most mornings sitting in a dingy café at the corner of Briennerstrasse and Augustenstrasse with a Hungarian Jew named Holoschi, who was one of his principle assistants. The man called himself Hollander in Germany and was another of these Jewish Anti-Semites...I suspected the Aryan background of many of the others, Strasser and Streicher looked Jewish to me as well as figures like Ley, Frank and even Goebbels, who would have difficulty in proving their pedigree."
So the creation of hatred towards the Jewish race, then the grotesque treatment that followed Hitler's decrees, was hyped to enormous proportions to justify the takeover of Palestine for a Jewish Homeland. No one used this method more than Lord Victor Rothschild in his House of Lords speeches urging support for a Jewish State in Palestine. You can see the play by the elite clearly here. To add further to this, Hitler's book Mein Kampf, was ghost written by Major General Karl Haushofer, who acknowledged that a major source for the 'ideas' it expressed came from Halford J. MacKinder, a director of the elite's London School of Economics.
HITLER A CONSCIOUS PUPPET?
To what degree Hitler was aware of his puppet status?
Was he a willing or unwilling pawn in this Zionist engineered heinous conflict?....
Hitler like many leaders of today was surrounded by a Zionist cabal: Heydrich, Goebbels, Rosenberg, Streicher and Eichmann...
The Jews wanted a prolonged and devastating Second World War, which would eclipse the carnage and destruction of WW I. There was not nearly enough gold in existence to provide the loan capital needed to finance the war machine required in Germany and America to fund the wartime economies of those nations. So the Jews taught Hitler, through Feder, how to make his own money, how to circulate it, and how to engage in international trade without throwing out all of Germany's growth into the slop bucket of Jewish usury, nor let the Jews intervene in international trade and harvest the wealth of German production as middlemen.
In this way, the Jews, who also poured money directly into Germany, financed Hitler in order to ultimately destroy Germany, and much of Europe, through Jewish manufactured war. They had done the same with their agent Napoleon Bonaparte, who considered himself to be the Jews' messiah, who tried to take Palestine for the Jews, who emancipated the Jews, and who was rewarded by the Jews with prison as punishment for promoting good Gentile-Jewish relations, which led to Jewish assimilation--the Jews most hated enemy...
Zionists welcomed the Nazis' anti Semitic policies. Like the Nazis, they believed in race-based national character and destiny. Like the Nazis, they believed Jews had no future in Germany. The co-operation extended to political and economic spheres. Adolph Eichmann set up agricultural training camps in Austria to prepare young Jews for Kibbutz life. He visited Palestine and conferred with Zionist leaders who confessed their true expansionist goals Think about it. Hitler could have just confiscated all the Jewish wealth. Instead he used the "Haavara Program" to help establish the State of Israel.
On Nov. 25, 1940, a boat carrying Jewish refugees from Nazi Europe, the "Patra," exploded and sank off the coast of Palestine killing 252 people.
The Zionist "Haganah" claimed the passengers committed suicide to protest British refusal to let them land. Years later, it admitted that rather than let the passengers go to Mauritius it blew up the vessel.
"Sometimes it is necessary to sacrifice the few in order to save the many," Moshe Sharett, a former Israeli Prime Minister said at memorial service in 1958. 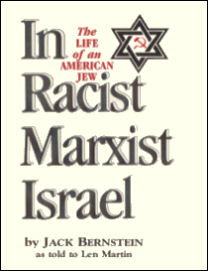 Jack Bernstein in his book 'An American Jew in Racist Marxist Israel' stated -
"The Ashkenazi Jews, who migrated to Israel from Germany, while sympathetic to Communism and support it, tend to favor the practices of Nazi-style fascism. During World War II in Germany these elite Zionist Ashkenazi Jews worked closely with Hitler's Gestapo in persecuting the lower class German Jews and delivering them to concentration camps. Now living in Israel, these elite Zionist Jews, who were well trained in Nazi-style fascism and favor it, have imposed many facets of fascism on Israel.
To give the impression that Israel is a democracy, members of the Knesset (Israel's Congress) are elected - but it's an odd kind of election. This is where Israel's so-called democracy stops. It doesn't make any difference which party wins an election, the Likud or Labour Party, the elite Zionist Jews rule in a dictatorial manner - giving favours to the elite clique and brutally suppressing any dissent.
Concerning Nazism/Fascism please let me clear a point. Germans are an admirable people - I dare say even great. But in Germany, the general population was victim  of the Nazis who through cunning and brutality gained power.
In Germany, the average Jews were victims of the Zionist elite who worked hand in hand with the Nazis. Many of those same Zionist Jews, who, in Germany, had worked with the Nazis, came to Israel and joined hands with the Zionist /Communist Jews from Poland and Russia. It is the two faces of communism and Nazi-style fascism that rule Israel.
Democracy is merely an illusion."
---
Related- Bormann ran Hitler for the Illuminati
----------- Illuminati Jews Planned the Holocaust?

I liked your article, it makes a lot of sense. After the war the Jews got Israel and now they are beyond criticism. Before the war people saw the Jews with suspicion.

Could we have lost the war, it is unlikely. Why do we today forget that we fought a cold war against our biggest ally in the war, it is very suss. As the fascists were fighting for private ownership why did we fight with those against private ownership, i.e the communists, the whole war is very suss and the U.S Jewish bankers came out the winners.

It is my understanding that a Zionist gave Adolph Hitler a copy of The Protocols of Zion. knowing it would incite him with hatred for the Jews, and it did. All one has to do is read The Protocols of Zion to know they are true. Nearly all of that document has come true.

Why I call it Zionist occupied Nazi Germany and why Hitler was so nice to the English all things considered.
Greg Hallet's "Hitler was a British Agent" is relevant here.

Interestingly only one Rothschild died in a concentration camp Elisabeth Pelletier de Chambure , mother of Philippine Mathilde Camille de Rothschild, but she was not Jewish, she was a Catholic aristocrat divorced from Philippe Rothschilds in 1934. Philippe was imprisoned by the Vichy government but escaped to London to join de Gaulle. The Wikipedia entry for him says he was released from custody in 1941.

At most, IMO, Hitler and the NAZIS went off reservation, like Kennedy, Ghadaffi, Hussein, and perhaps nowadays Putin and vocally so far Trump. Its a mafia club and you only get there by playing the game, including controlled opposition. Take matters into your own hands and you and your people pay the price. You might even be hoodwinked into thinking you are independent and made to cross the line, think of Hussein's getting the ok from the CIA to take back the oil that Kuwait had provocatively stolen.

The elite will destroy civilizations and even the world before they would allow the truth to expose them fully and they have used the Cabala and Talmudic Judaism and Jesuitic militarism and any other 'isms' to their own ends. Why they have succeeded so far and for so long I know not.

I was comparing Firefox browser vs Chrome for down load speed, when I noticed Firefox has blocked your latest article about the Jews and freemasons being behind WW2.

Firefox totally blocked it , while Chrome allows the first 10%

Must have hit a nerve,