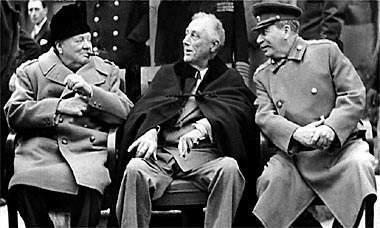 (left. A frail looking FDR at Yalta Feb 1945. He died two months later)
In 1946, Stalin told FDR's son that the
Illuminati Jewish bankers, "the Churchill gang" [i.e. MI-6]
had poisoned FDR and were trying to poison him.
They succeeded in 1953.
WHO KILLED FRANKLIN D. ROOSEVELT?
Parade February 9, 1986
by Fletcher Prouty
(abridged by henrymakow.com)
The World War II Cairo conference between Pres. Roosevelt, Prime Minister Churchill, and Generalissimo Chiang Kai-shek ended on Oct. 26, 1943. That evening I was given orders to fly a group of participants from Cairo to Tehran. Up to that time, I had not been aware that there was going to be a Big Four meeting of the Super-Powers in Tehran.
As I went out to the plane that morning to get it ready to go, two limousines came from the city. They were T. V. Soong's Chinese delegates. I flew them to Tehran that day.
En route, I stopped at Habbaniyah in Iraq for refueling, and while on the ground an Air Force B-25 arrived with an old friend of mine flying it, and with L. Col. Elliott Roosevelt, the President's son. I introduced him and Roosevelt to the Chinese, and vice versa.
I don't know whether any of you ever realized this, but years later the fact that Elliott Roosevelt had gone to the Tehran conference brought up one of the most amazing untold facts in our history. I can only imagine why more had not been written about it.
Because Elliott had met Stalin in Tehran with his father in 1943, in late 1946, Gardner Cowless, publisher of LOOK magazine asked him to go to Moscow to interview Stalin.
Roosevelt accepted this offer and did interview Stalin there. At the end of a long interview, he turned to the Generalissimo and asked one more question, "Why is it that my mother has never been permitted to visit Moscow even though she has made three very formal applications for the trip?"
Stalin glared at Elliott and said, "You don't know why?"
Elliott replied, "No!"
Quickly, Stalin responded, "Don't you know who killed your father?"
Roosevelt-shocked-answered, "No." 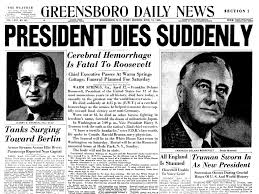 Emmanuel Josephson, MD, an agent of the London Rothchild family , wrote a book stating that at the Yalta conference Stalin ordered a Russian toxicologist , posing as a valet, to poison Churchill, Roosevelt and FDR's aide de camp, Col "Pa" Watkins in one of Stalin's private dachas. Both FDR and Watkins died but Churchill was saved by Dr. Alexander Fleming who had also saved Churchill from drowning as a young boy. People usually turn black after a strong dose of arsenic, as in the case of Lenin, Luciano, and the John Wilkes Booth double. Roosevelt "disappeared" from public view after the conference and was replaced by Hugh Mercer, who was not allowed to be interviewed nor photographed. FDR "died" 2 months later of a supposed stroke.

Where does "Dan" get this phony idea that the American people did not know FDR was a cripple? We all knew it, even us kids. Seems to me he was even used as the "poster boy" in some kind of money drive to help people with the disease.

Plus, when he died the tribe did not yet control mainstream media absolutely, there were still real journalists who wrote to get the truth to the public. More than one wrote about the family-demanded closed casket because eye witnesses had told them that FDR "turned black" when he died. That too was common knowledge at the time. The reason it was important enough to write about it was because many people then, as well as now, did not take care of their health in any way, dying from their neglect, but NONE of them "turned black" when they died. Only FDR.

can't believe that people like "Dick" actually believe that FDR was fighting for a good cause, and are now putting hope in Obama. Does he even read your articles, Henry?

FDR was a high-ranking Freemason and was NWO through and through. He was one of the worst presidents in US history and was every much a part of the "transnational criminal cartel" as Churchill was.

Depressing that people can be reading your site and still believe that FDR and Obama have anything to recommend them at all.

I was a very young girl when FDR served. I recall the day he died. (Playing baseball after school when the janitor came out and informed the Principal of his death.) So, I'm not some young kid who didn't learn the alphabet in sequence, can count all the way up to 10 and add numbers in double digits. But, here's the story in my 'take'.

FDR didn't hide his physical problems and young as I was even myself and those of my age were aware of his handicap....

But, I do recall seeing FDR in his wheel chair many's the times at movie theatres, when Eyes and Ears of the World would be shown and the common understanding of his horrible polio, and how he never wanted to be known as the 'cripple President' so to save his pride would have everything set up beforehand to put his best face/foot forward. Common knowledge, believe me. He was proud and to him this affliction was a personal 'shame' he tried to conceal. But, it was known and we understood. It was not to deceive the public.

This assertion was also made directly by Elliot Roosevelt in a book called â€œAs He Saw It.â€ As for the motive, Elliot Roosevelt seemed to suggest, and others have argued persuasively, that FDRâ€™s payback for bailing out the British in WW2 was going to be to destroy the British Empire politically.

The US got Harry Truman and the bombing of Hiroshima, followed by a bonanza of free trade and deregulation under Eisenhower, the Chinese got Mao Zedong, and the Russians got Khrushchev â€“ all within a few years of Yalta and the end of WW2.

The â€œBritishâ€ interests represented by Churchill are and were a transnational criminal cartel, and they could not survive a strong coalition of nation-states â€“ however flawed internally â€“ working against their interests.

Tonight is a crucial moment in this same spirit, as Putin and Obama meet over the future of Syria and Ukraine, and we can only hope Obama has some of FDRâ€™s courage.

I'd have thought that handing much of Europe over to the Soviets was indeed part of the NWO, as was allowing Perl Harbor to happen, just as the Listuania sinking was allowed to happen, to bring America into the NWO bankers wars. The same Jewish bankers behind the Bolshevik Revolution. Patton was against everything that Eisenhower stood for. Patton died in mysterious circumstances and Eisenhower "The terrible Swedish Jew" got to practice genocide on millions of German POW's and civilians, Russian/Jewish/Bolshevist hordes (2nd wave of the invasion) did as much evil coming in from the east in the genocidal 'Hellstorm' atrocities . Perhaps all these leaders, most of whom, including Eisenhower, don't know what we now know, and then go off reservation a little. Some get away with it, some die in mysterious circumstances. Show me a leader who comes out about 911 and gets away with it. Ahmadinejad is the only one I know of and Iran is going to be invaded by the NWO gang after Syria. They don't have Londonistan central banks, you see.