How Do We Stop Masonic Corruption? 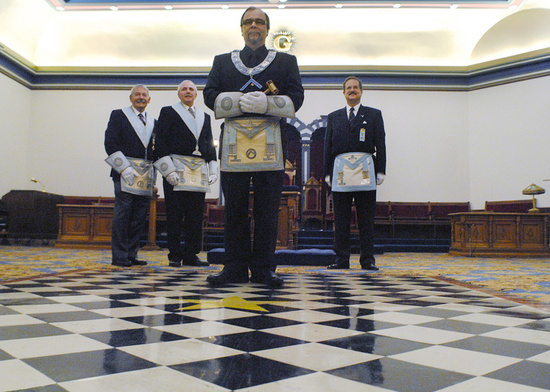 INBOX
Three emails this morning address
the occult subversion of society.
Letter One:
[Details changed]
I  read your article about Freemason corruption and felt i had to share my story with you.
I was posted to 56 combat engineer regiment in Thunder Bay Ont. [Canada] as a regular force soldier to work at a reserve unit.
As a veteran of the war in Afghanistan, i took my job very seriously to help improve the skills of reservists. Upon arrival to the unit i could tell something was off with the leadership but i had no evidence to prove anything.
Over four years slowly the picture became clearer. The Co, Regimental Sgt. Major and section commanders where all Freemasons. Being reservists, they all had other jobs, banker, millwright, teacher, etc.
I found it weird that all leadership belonged to the same Freemasons lodge. Then over time I became aware that promotions in the reservist world are done internally at the unit level not by a merit board in Ottawa like the regular force, leaving the door wide open for the Masons to promote themselves. Then i became aware that the junior ranks bank account was merged with the sgt's and officers mess bank accounts. 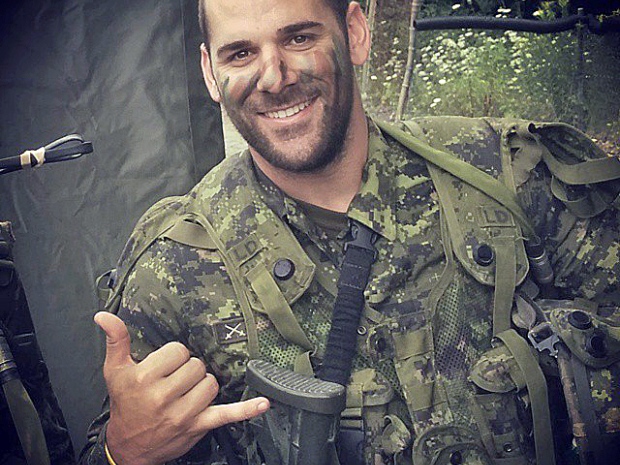 (Left, Oct 22 is the anniversary of faked death of Nathan Cirillo, which Harper used to bring in "anti terror" measures. The shooting was a false flag. No doubt fact the Masonic Canadian military made possible this ruse designed to deprive Canadians of their freedom.)
Suddenly thousands of dollars were spent in the officers and sgt's mess while shutting down the junior mess hall. The CO was having his civilian counterparts come for meetings in his lavish mess hall where he could wine and dine clients on the military budget.
This is bad because money is automatically taken off paycheques to support mess halls. Young privates making next to nothing are having money taken from their paycheque to support the leaderships fun. in the regular force these bank accounts are kept separate so this very problem doesn't happen. With the Commanding officer being a banker it was easy to see who was steeling the money from the junior ranks mess hall.
I also noticed certain members never had to show up. After probing, I found out that if you were attending Freemason meetings, you did not have to show up to work at the unit which pissed me off because these guys get sent overseas with us and are expected to know their jobs. The leadership at the base was recruiting members to their lodge through the military which is fucked. Also they were recruiting people who happened to be easily manipulated simple minded folks.
i didn't know who to say anything to because Freemasons are all over the place in high ranking positions. How do you stop this from happening?
-------------- 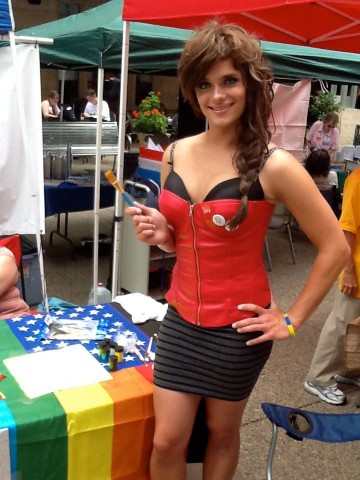 Letter two:
Our local ELKS LODGE [ which seemed to take in many Masons after some of the lodges closed down] had made a yearly calendar of all the officers in the lodge for each month all in DRAG.
When I first saw the calendar I Laughed thinking it was funny this was in 2004........you did this article on Masons sponsoring gay rituals in 2011 and it is now end of 2015
We have a Jesuit from Gonzaga -who is also a transgender running the women's shelter in our COLUMBIA COUNTY, ST HELENS, OREGON whose NAME LIKE THE BIBLE IS NAMMAN.
The director-registered agent is a nut job MORMON AND TRAINS HER INSANE STAFF NOT TO REPORT ANY CHILD TELLING THEM OF SEXUAL ABUSE. THEIR GOAL IS TO TAKE CHILDREN FROM HETEROSEXUAL HOMES AND PLACE THEM IN GAY AND TRANSGENDER HOMES.
NAMMAN [ BLACK RABBIT MAGIK CLUB AND BUTTERFLY BOYS] HAS A YOUNG BOY LIVING WITH HIM. I have some of his art work, and his own photos if people wish to see them.
I would also like a photo for people to see of the Masonic lodge in Sacramento, CA with 3 year old boys "busts in concrete" on the walls. Just like progressives love AMERICORP which is PURCHASING UP OUR LAND..........
They seem to have no clue that THE BUSH FAMILY began Americorp. THEY SIGNED IN THE NOAHIDE LAWS IN 1991 . People need to know all of this................
---
Letter Three:
My name is Dakalo, from South Africa. I'm a fan of yours and truly respect you for standing firm in what you believe in.
I have personal life experiences on satanism which "African" people in Africa, specifically South Africa, refer to as witchcraft.
Nothing can ever be too difficult for God; hence,  I wanted to know if it's possible to save a satanist from serving the devil, make them "holy" again?
Your feedback will be highly appreciated.
------
RELATED- Roger Barbour- My Lifelong Struggle With Freemasons
from ALAN    - YOU TUBE

HOW TO DEFEAT THE ELITE & END THEIR PROGRAMMING

Comments for " How Do We Stop Masonic Corruption?"

How to stop Masonic Corruption?

2 Chronicles 7:14
14 if My people who are called by My name will humble themselves, and pray and seek My face, and turn from their wicked ways, then I will hear from heaven, and will forgive their sin and heal their land.
NKJV

I recommend that you read "Battling Witchcraft" by Win Worley. It is written from a christian background so I think you'll find it relevant to your concern.

I recommend that you read Battling Witchcraft by Win Worley. It is written from a christian background so I think you'll find it relevant to your concern.

In answer to Dakalo, anything is possible with God but that does not mean it is easy, nor will He violate the free choice He has given man. Honestly reversing ones' life, doing real penance and asking God's help, will gain it, but only on His terms.

Knowing very little about organized satanism, it appears to me that there are degrees, similar to all things anti God. Perhaps beginner satanists just need some honest conversation with someone who knows their end result and can graphically explain it.

But if it has gotten to the stage of demon possession, which is too often laughed away by non-spiritual skeptics, the only people I know of who can combat it are Catholic priests who are still really Catholic priests. And even then, only those who have spent much time learning how to properly go about it. Not easy to find anymore, I'm told.

As for getting rid of masonry, like satanism, which it eventually morphs into, it probably requires getting rid of pride, greed, lust, even murder and other sins in the hearts of men. Also not an easy proposition.

In short form, especially because of the oaths foolishly sworn too, a proper return to God and his commands is the only way out for members of these organizations as well as for any of us on earth.