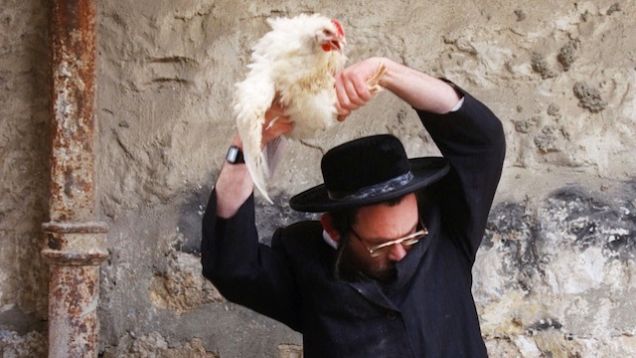 Left. The 'humane' transfer of ones sins to a chicken by swinging it overhead and
then sacrificing it in a deal with Satan.

This article is packed with the typical (Yeshiva) truth-lie mix to mislead and confuse. Letâ€™s clarify/ demystify a few points â€¦

Gurwitz is trying to lump Muslims and Jews together while singling out Christians for murder! This is cheap fear porn! The truth is: this is a Judaic ploy to impede the rising orthodox Christian-Muslim alliance that will be the nemesis of Judaic Supremacy [and yes, no one will be able to stop this prophesized alliance]! Thus, his talk contains elements that cleverly aid the ongoing Talmudic attempts to hijack/ I.D.-theft of Islam. ... Jews got along well with Muslims way back then because of the MERCY inherent to true Islam, and because those were very different Jews, unlike today's demons/ impostors.]

Finally, note how the ARROGANT Jews would prostrate to devils/demons, and attempt to transfer their sins to chickens â€¦ but NEVER repent to the One True God! [Thatâ€™s why they were Cursed in the first place!] â€¦ We recently explored at HenryMakow.com how Zio-Nazism and Zio-Jewry may be joined at the hip. Itâ€™s no coincidence that this article attempts to avert all blame upon the religious Jew alone. It would be no less than the scope of an entire book to reveal how the Vaticanâ€™s occult/satanic/voodoo repertoire may be far more monstrous than this singled-out Jew with his chicken! [After all, the Vatican bank = Rothschild bank].

Therein, the Jew-vs.-Christian dichotomy may just be another false propaganda/ ruse. The truest of Christians have been systematically/ incrementally killed off ALREADY, since 320 AD and till WWII. Just like the "European-Jew" is a hoax/ oxymoron, so may well be the "European/White-Christian" or the "Turkic/Levant/Persian/Pale-skinned Muslim" identities! ... Why? ... Because the AUTHENTIC/ original Judaism, Christianity and Islam ... were all SEMITIC in nature ... and Moses, Jesus and Mohammad were all Semites. Duh!

Greg noted in his comment to the Anger Management article that : [

The trick the social justice warriors (communists/Marxists) use is to call you a misogynist if you criticize the Violence Against Women Act. ] It's even worse than that. On last Sunday's talk panel on The National on the CBC [ which is always agonizing to watch but quite revealing of what the elite believe and want to foist onto the public ] that bizarre robotic looking propagandist Adam Goldenberg outright stated that the opposite of feminism "is misogyny"!

I have to laugh because then by using his OWN logic - opposition to masculinism [ a term the other "male" panelist was wary of even using! on a discussion about men's rights! ] must then be misandry! I just love the irony of how he made the point of his opponents while trying to make a craven point he thought was bolstering his side of the argument. Though it was the first time I ever saw the panel get so animated as Goldenberg was overreaching in his vicious anti man propaganda to the point where the other "male" panelist was quite roused in opposition to Goldenberg's totalitarian position.

Africans here are culturally steeped in that type of voodoo, & circumcision.

Maimonides: The Jewish Greek. Maimou in modern Greek is a monkey.