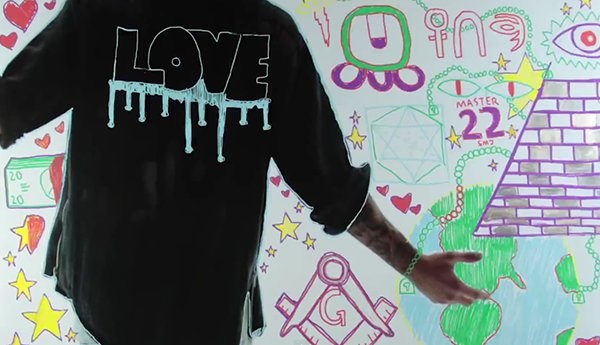 left. Screenshot from Bieber music video. Note the Masonic and Illuminati symbols.
A Toronto reader ruminates on how pop culture icons
like Justin Bieber and rapper Drake are Satanists. A society
run (into the ground) by a satanic cult is a satanic cult.
Perverts and traitors provide the background noise.
"The world's now placid, featureless, and culturally dead...There's nothing left to struggle for, and there are too many distractions and entertainments. Do you realize that every day something like five hundred hours of radio and TV pour out over the various channels?...No wonder that people are becoming passive sponges--absorbing but never creating.' -Arthur C Clarke (Childhood's End page 140)
by Ikonoklast Samizdat
(henrymakow.com)
Everywhere you go in Toronto, there is a continual stream of invasive audio pumping Canadian 'entertainers' Drake or Justin Bieber into the minds of people. It seeps in consciously--many people clamor for the next pop hit-- or unconsciously because the subconscious has no firewall.
Elevators, lobbies, taxi cabs, bars, restaurants, cafes, etc. If you live in Toronto (the 'six' boroughs), you cannot go a day without hearing these clowns.
What exactly is being absorbed by the passive people sponges?

Drake's new album is called Summer Sixteen and the cover art was just released. It prominently features the symbol 6 with an all-seeing eye within it.
Drake's image handlers have had him pose using these images before and his clothing brand features another occult symbol: the owl (OVO is stylized as 2 owl eyes and a beak).

The mudra showing the implicit triple-6 is a signal to initiates and adepts. Its nefarious meaning includes the beast of revelations and the kabbalistic interpretation of secular perfection (tikkun olam).
Turning to Bieber, he has a tattoo of the all-seeing eye and the owl.

Bieber's new album Purpose (he ascribes to apostate New Age Churchianity) features a blatant inverted cross on his chest--a central Satanic symbol representing the vain attempt to overthrow God's order.
Perhaps even more menacing, the music videos of these 'entertainers' usually feature subversive subliminals. Take Bieber's recent video 'Where are U now?'
Flashing inverted crosses, all-seeing eye pyramids, and the masonic square and compass among all sorts of abominations for the unsuspecting mind. (see above) 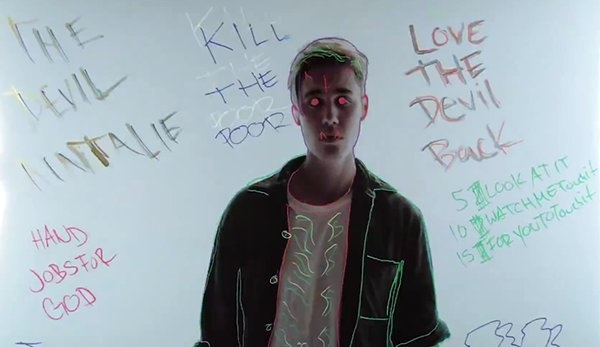 (left, Bieber music video)
These symbols penetrate the mind and contribute to the alchemical processing of the recipients perception of reality. They are demolishing any resistance to the imposed psychodrama forced on humanity by the overlords.
This movement is hardly new--glance back to the Beatles and there is the same medium-message.
'We corrupt in order to rule' -Giuseppe Mazzini (High-level Freemason)
Yes Drake's mother is Jewish which makes him Jewish. He's a rich kid from Forest Hill. His full name is Aubrey Drake Graham and he's been famous since his youth for being an actor on the show Degrassi (I didn't watch it growing up in Quebec)
He was chosen to redesign a Raptors uniform. 'The Six' loves him.
Check his Wikipedia page.
PS

Illuminati pooppet Beyonce proved herself a complete shill by pushing a 'racially-charged' performance at the Super Bowl--also proving that sports have turned into a giant social engineering operation.
She stoked racial tensions by wearing militant Black Panthers-inspired costumes and the opening lyric to the new song Formation is telling: 'Y'all haters corny with that Illuminati mess'

Excellent post on Beiber and Drake. I just wish it was longer. There are a couple of very credible videos on the net that supply evidence that Beiber is apparently a girl. At first you think No Way! But after watching the vids, you really wonder.